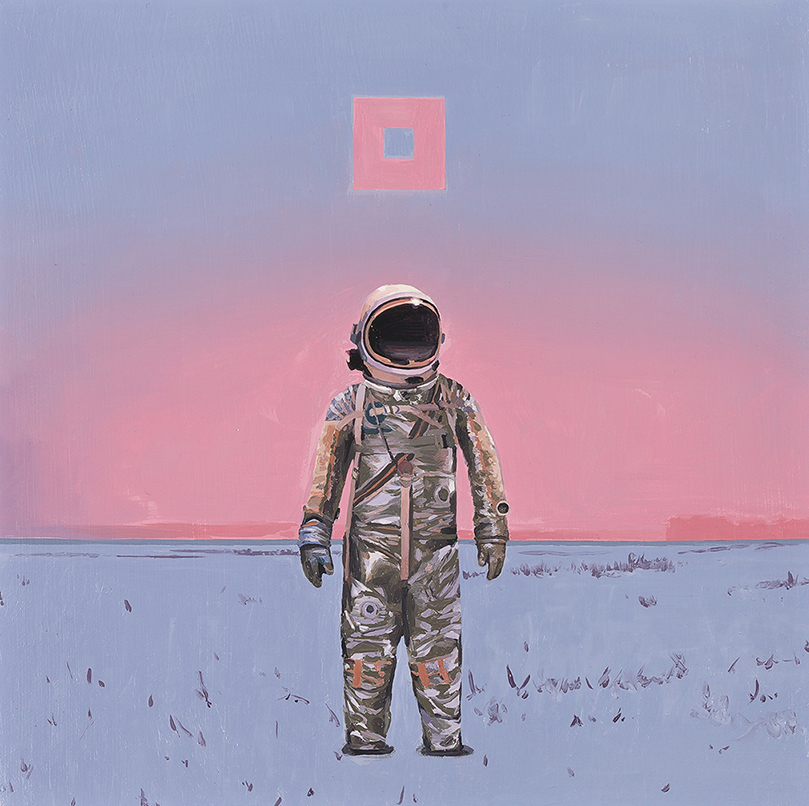 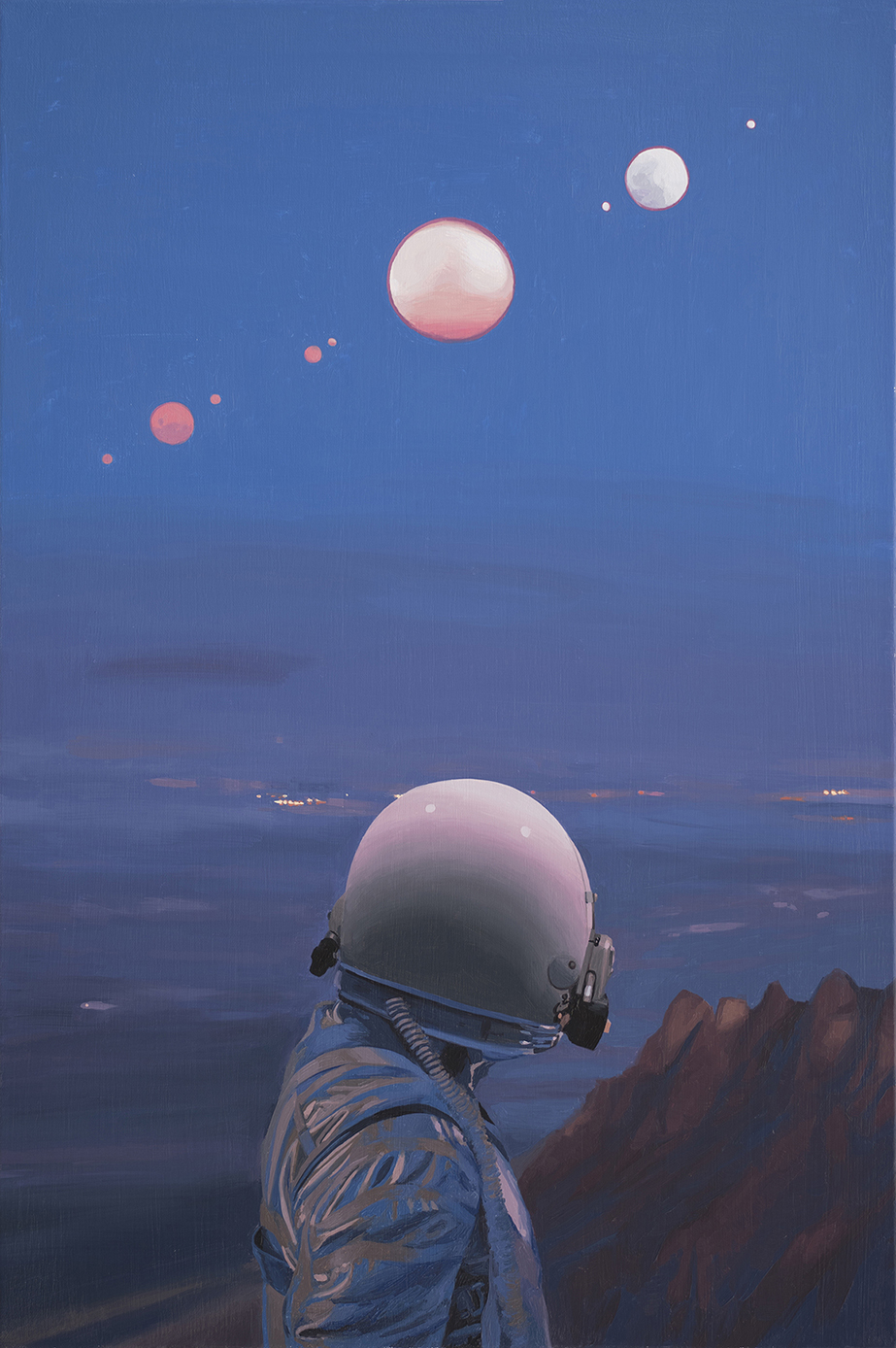 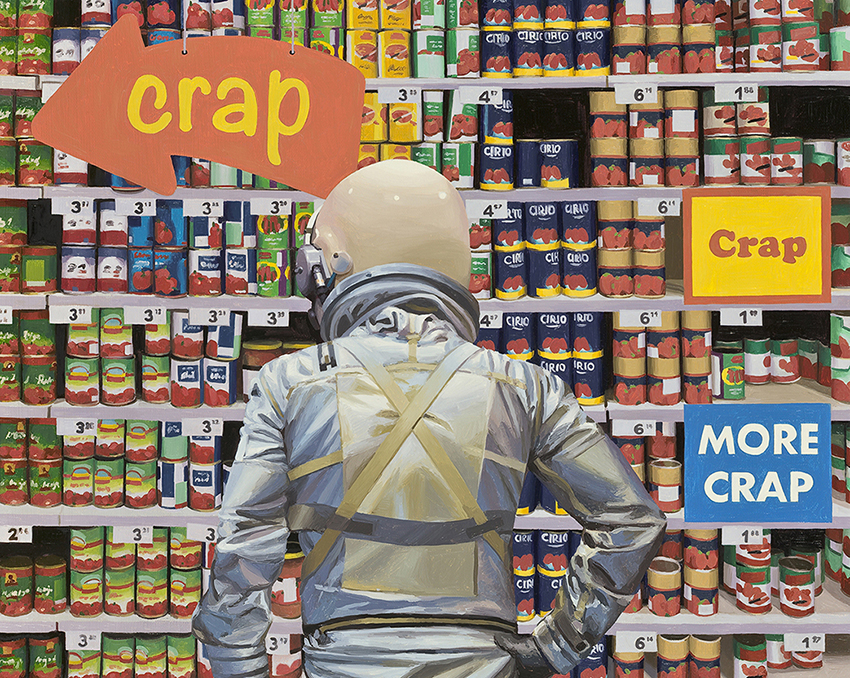 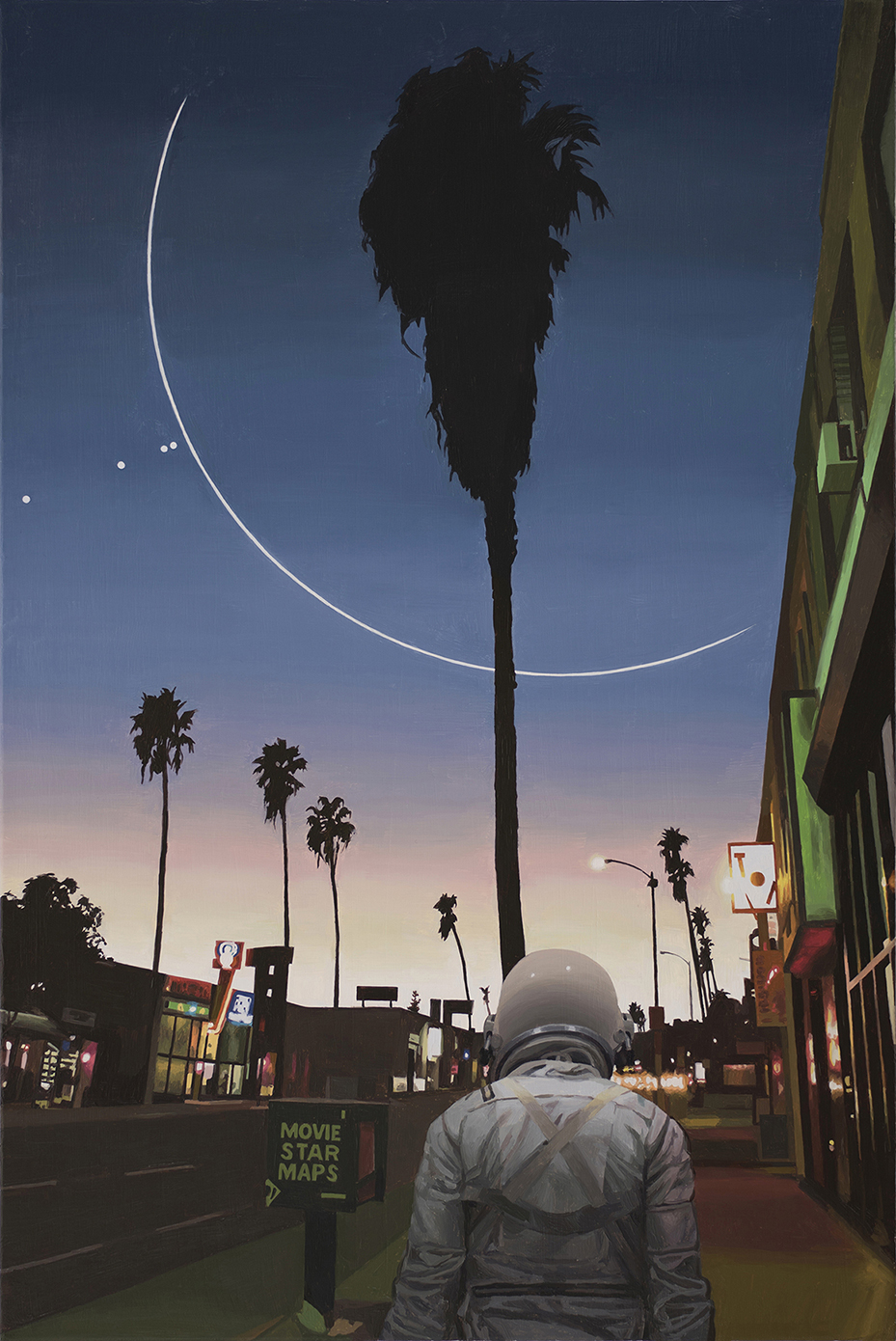 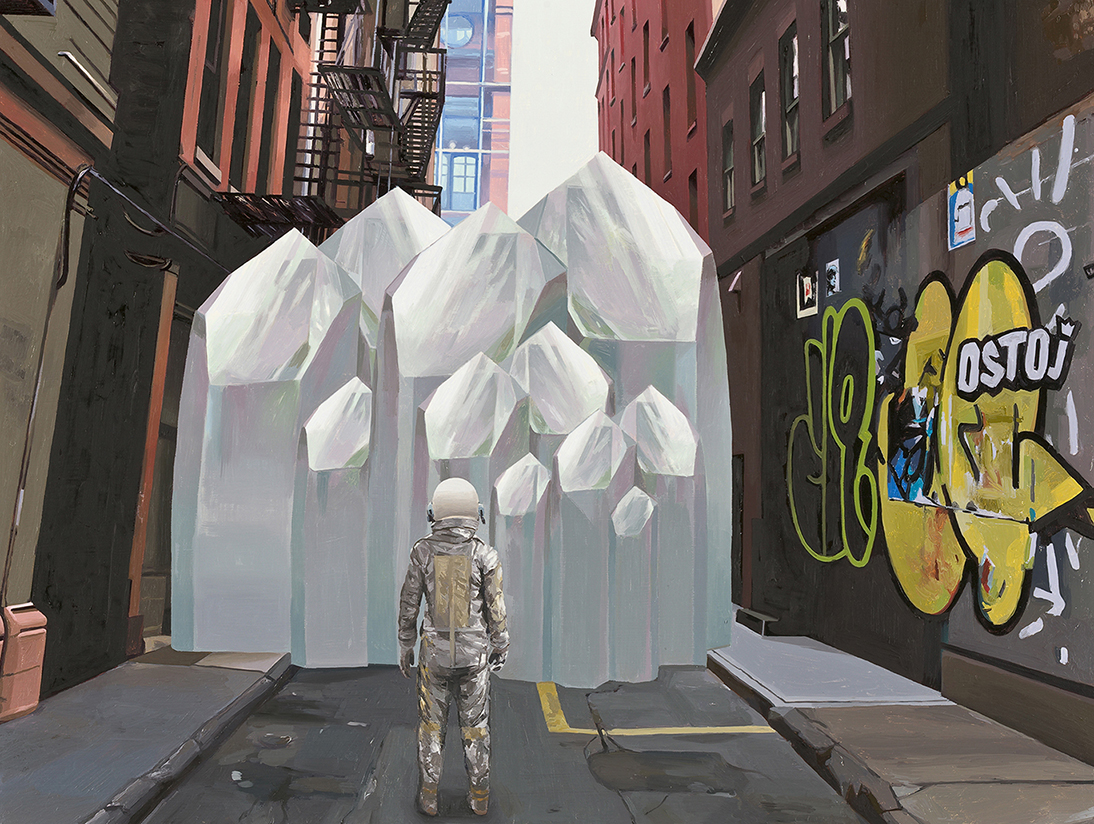 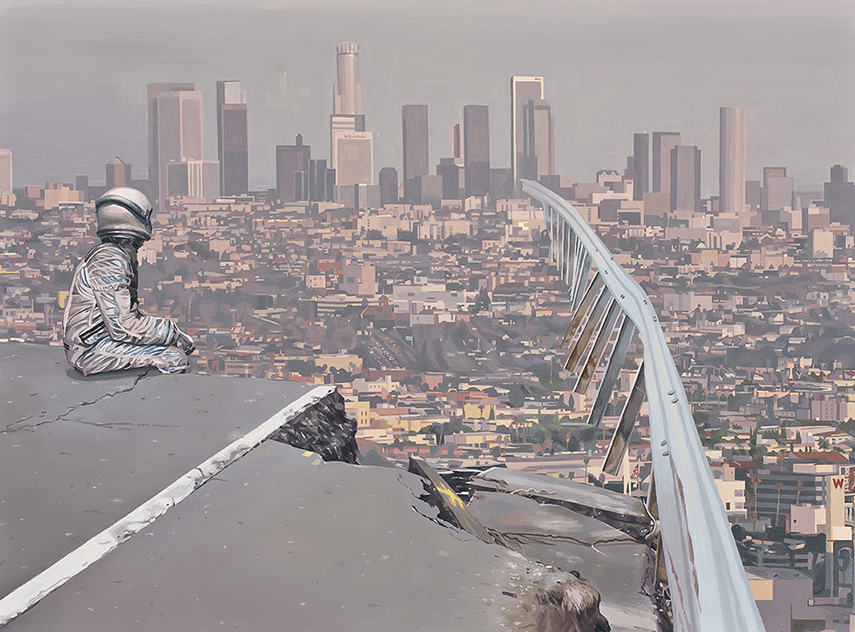 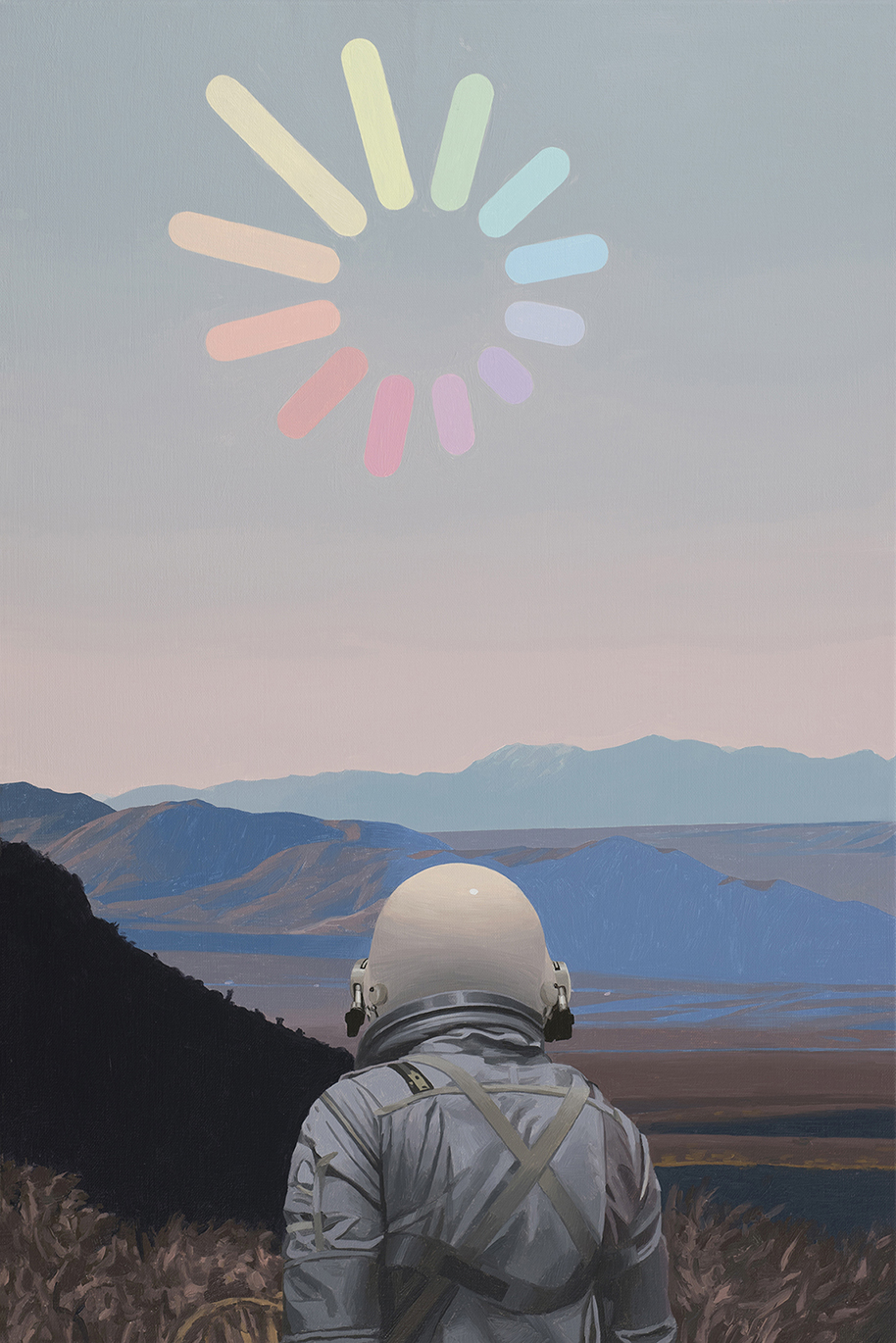 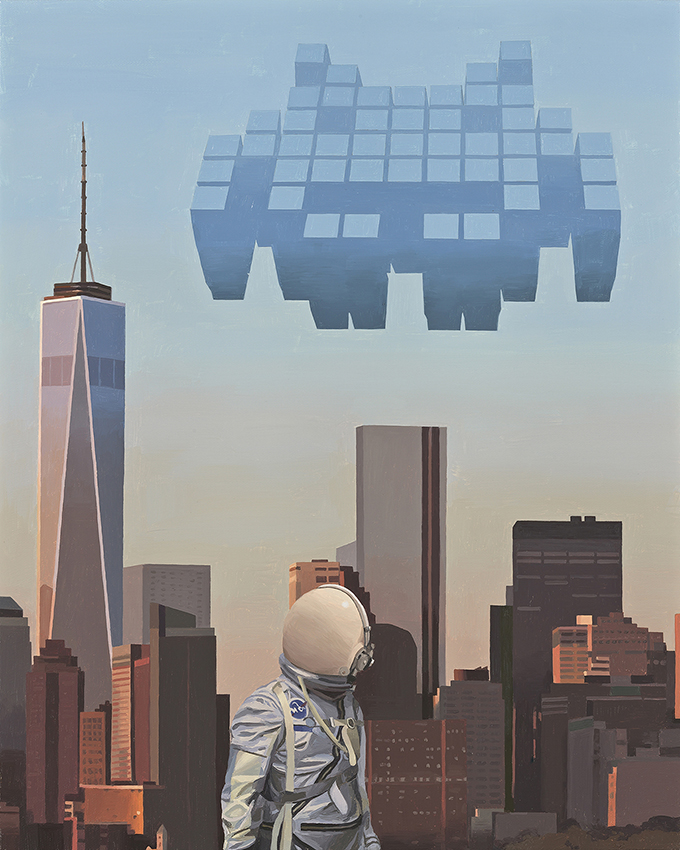 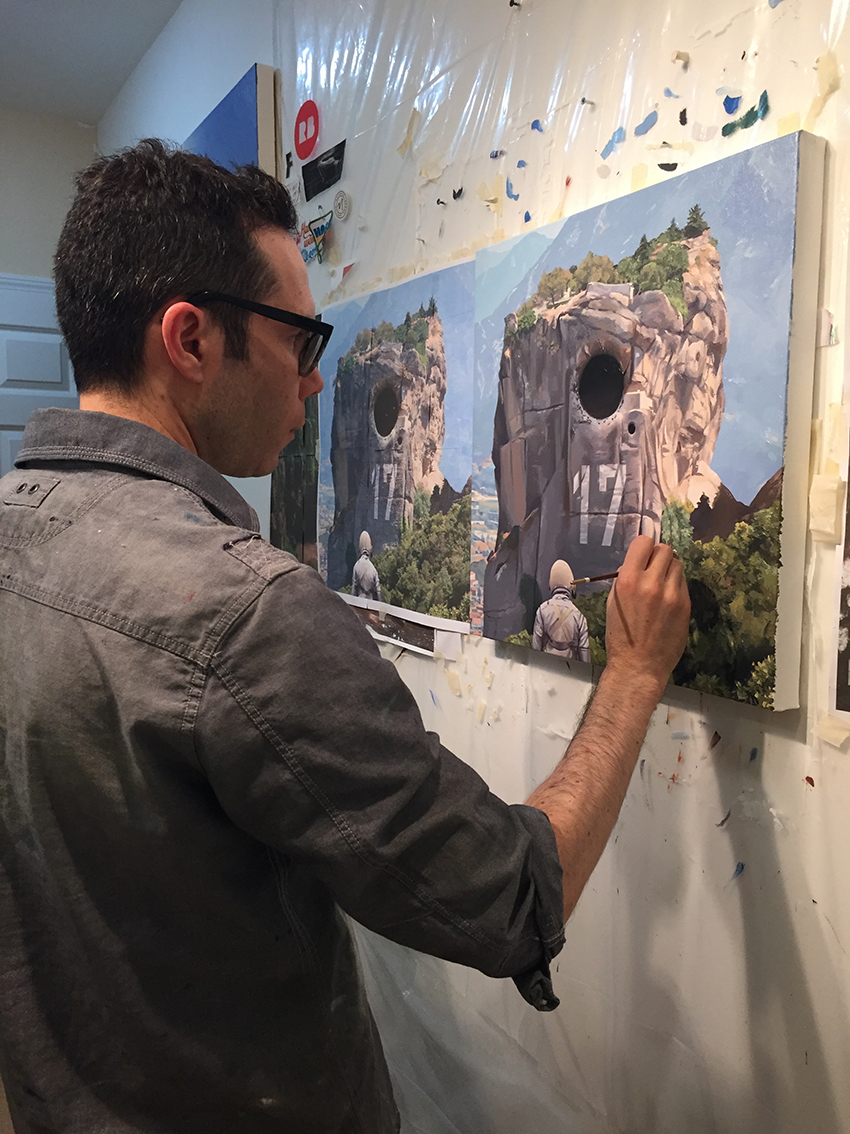 Scott Listfield is known for his paintings featuring a lone exploratory astronaut lost in a landscape cluttered with pop culture icons, corporate logos, and tongue-in-cheek science fiction references. Scott grew up in Boston, MA and studied art at Dartmouth College. After some time spent living abroad, Scott returned to America and, shortly before the real life, non-movie version of the year 2001, began painting astronauts and, sometimes, dinosaurs.

I paint astronauts and, sometimes, dinosaurs.

Stanley Kubrick’s 2001: A Space Odyssey was released in 1968, well before I was born, so I have no first-hand knowledge of how it was received. I don’t know if people really believed we’d be living in space in 2001, if we’d have robot butlers and flying cars, geodesic lunar homes, and genetically reconstituted dinosaurs helping or eating us. But from Lost in Space to the Jetsons to Jurassic Park, it seems that popular culture has fostered this space-age perception of the future. Generations raised on these TV shows, movies, comic books, and novels are now grown and living in a future filled with mini vans, Starbucks, iPads, and Hip Hop videos. In many ways, the year 2001 failed to live up to expectations. And yet the world today is peculiar in ways unimagined in 1957, when Sputnik was launched, or in 1968, when 2001 was released, or even in 1994, at the dawn of the internet. The present is in fact a very unusual place, and it’s strangest in the ubiquity of things we take for granted.

AMM: You must be very used to this question — why aren’t you an astronaut? Do you at least have an astronaut costume in your closet?

SL: Well, to be an actual astronaut involves a lot of things I’m not good at. Like traveling at very high speeds while simultaneously not throwing up. And math. As a child, the first thing I remember wanting to be when I grew up was an astronaut. But I soon realized, after getting queasy on children’s rides at the carnival, that it just wasn’t in the cards for me. So I tried to find the next best thing.

And no, I don’t have an astronaut costume in my closet. Although I do have a helmet, and I’m working on the rest of it.

AMM: The notion of pop culture and space-age perceptions of the future is fascinating in your work! What were the most important milestones and breakthroughs in your journey of finding your artistic voice and developing your work and concept?

SL: I think, like most things in this world, it was a combination of a small part genius and a large part just plain dumb luck. After spending most of my young life in America, I had the opportunity to travel the world a bit while I was finishing up college. It was right at the time when I knew I wanted to be an artist, but was still very much figuring out what the hell that meant. So I returned home and got down to the business of what to do with the rest of my life. When living abroad I got used to this feeling of being a stranger, of exploring a place that was not my own. When I returned home, I expected that feeling would quickly fade, but to my surprise it didn’t. I couldn’t shake the feeling that I was an alien in my own land. It was around this time that I started thinking about making a series of paintings which, in some way, spoke about this feeling of being an explorer, of not quite feeling at home in the world you live in.

It was also around this time that I watched the Stanley Kubrick film 2001: A Space Odyssey for the first time. I had grown up watching Star Wars, and the Jetsons, and Transformers cartoons, and all manner of TV shows and movies which had all told me that the 21st century was the future. And I hadn’t realized it, but I kind of grew up expecting that my adult years would be spent living in space, riding in flying cars, and hanging out with robots who knew how to crack a joke. Instead, as a recent college graduate, I was taking the bus to work, washing my clothes at the laundromat, and cooking single serve pizzas on a hot plate. I realized that the fictional year 2001 in the movie was dramatically different from the actual 2001 I was living in. It occurred to me then that an astronaut was the character I had been looking for to put into my paintings.

Now to get back to the “just plain dumb luck” part, I had absolutely no idea, when I came up with this idea, that I’d still be painting astronauts 15 years later. It seemed like a cool idea at the time, but it’s turned into something much bigger than that. And a lot of that I didn’t realize until much later, after I had been painting astronauts for some time.

AMM: The idea of loneliness and isolation in regards to the astronaut who is exploring on his own is deeply mysterious. Could you elaborate your ideas/thoughts about it? Does your personal history make its way into your art?

SL: Well, I think loneliness is one aspect of it. But there’s a certain feeling you get exploring a new city on your own. Maybe you’re something like 60% lost, but you don’t totally care. You climb a hill, come around a corner, and suddenly, to your surprise, the entire city is laid out below you, lights twinkling as the sun sets. You’re alone, maybe you’re listening to some music, and you do feel a small bit lonely. But you also feel like you’ve stumbled onto something magical or important or meaningful, all by yourself, and at least for a moment you get to sit back and feel like a tiny observer of a strange big stupid world.

I mentioned earlier that I spent some time traveling while I was in school. Although that was a long time ago now, that feeling is what first inspired this series of astronaut paintings. And I still go back to it every now and again, so that I can hopefully recapture it in my work. So I don’t think of the astronaut as being lonely, but as exploring. I try to paint it in such a way that it’s hopefully easy for anybody looking at my paintings to put themselves in the shoes (or, well, boots) of the astronaut.

AMM: You feature so many places in your paintings, but what would be your favorite place/landscape of all on earth or maybe even on another planet?

SL: I lived briefly in Sydney, many years ago, and it might still be my favorite city. I also find myself continually drawn to the mountains, deserts, and weird urban sprawl of the greater Los Angeles area. Maybe it’s because I grew up in Boston, but that part of the world seems so strange and captivating to me. People clinging to the side of steep mountains, with the desert spread out before them, driving Deloreans down a hill to eat cheeseburgers. I couldn’t come up with something more surreal.

AMM: What influences outside the visual arts inspire and impact your approach to making work?

SL: Oh lots of things. I think there’s a ton of amazing art happening right now, but I’d say that most of my influences come from elsewhere. Books and movies, particularly science fiction. Cartoons, both contemporary and the ones I watched growing up. I listen to a lot of music in the studio which sometimes sets the tone for what I’m working on. I also like to get out and walk around when I can, especially places far from home. Seeing new things gets me back in the mind set of my astronaut.

AMM: What were the most challenging situations you’ve been through in your artistic career? Any wisdom or advice you could share about them?

SL: Just to be clear, nothing I’ve been through in my life would really constitute ‘challenging.’ My struggles are more on the order of ‘I can’t believe they cancelled my favorite show,’ and not so much ‘Everyone I know has dysentery.’ In the grand scope of human disaster, whining about a period in my life when no one liked my weird astronaut paintings seems a bit silly.

All that said, I do think making art is often a struggle against your own insecurities. You need to do it because you love it. If you’re waiting for the outside world to validate your creativity, you might have to wait a long time, and you have to be ok with that. I’ve been doing this for a while now, and after some years flailing around, my art career was starting to go somewhere. Or so I thought. In 2008 the economy crashed, and with it went every single gallery that had ever shown my work. I spent a few months seriously questioning myself for the first time since I was in school. Should I stop painting astronauts? Should I stop painting entirely? Was all the effort worth it?

But instead of letting the doubt creep in, I doubled down on what I was doing. I had to have faith that if I liked what I was doing, I would find other people who did, too. I put my work out all over the Internet. Facebook, Instagram, Twitter, and Tumblr were all new things back then and I tried to get my work in front of as many eyeballs as I could. I started building a small following. Then a larger one. Then people started buying some work. Eventually the galleries started reaching out. I’ve had to remind myself over the years that an art career is not a linear thing. There might be many peaks and valleys. You’ve got to weather that and always have faith in yourself and what you’re doing.

Also, steer clear of dysentery if you can.

AMM: If there were a magic power you could use in your art making, what would it be?

SL: Well, if I could make paintings twice as fast, that would sure be helpful. Also super strength. Not really necessary for making art, but it would be freaking cool.

AMM: What’s next for Astronaut Dinosaur?

SL: Lots more paintings. I’ve got shows coming up in 2017 in Los Angeles, Montréal, and Chicago.