“Paintings About Nothing”: Absurdist humour, nudity and long-tailed dogs in William Schaeuble’s artworks 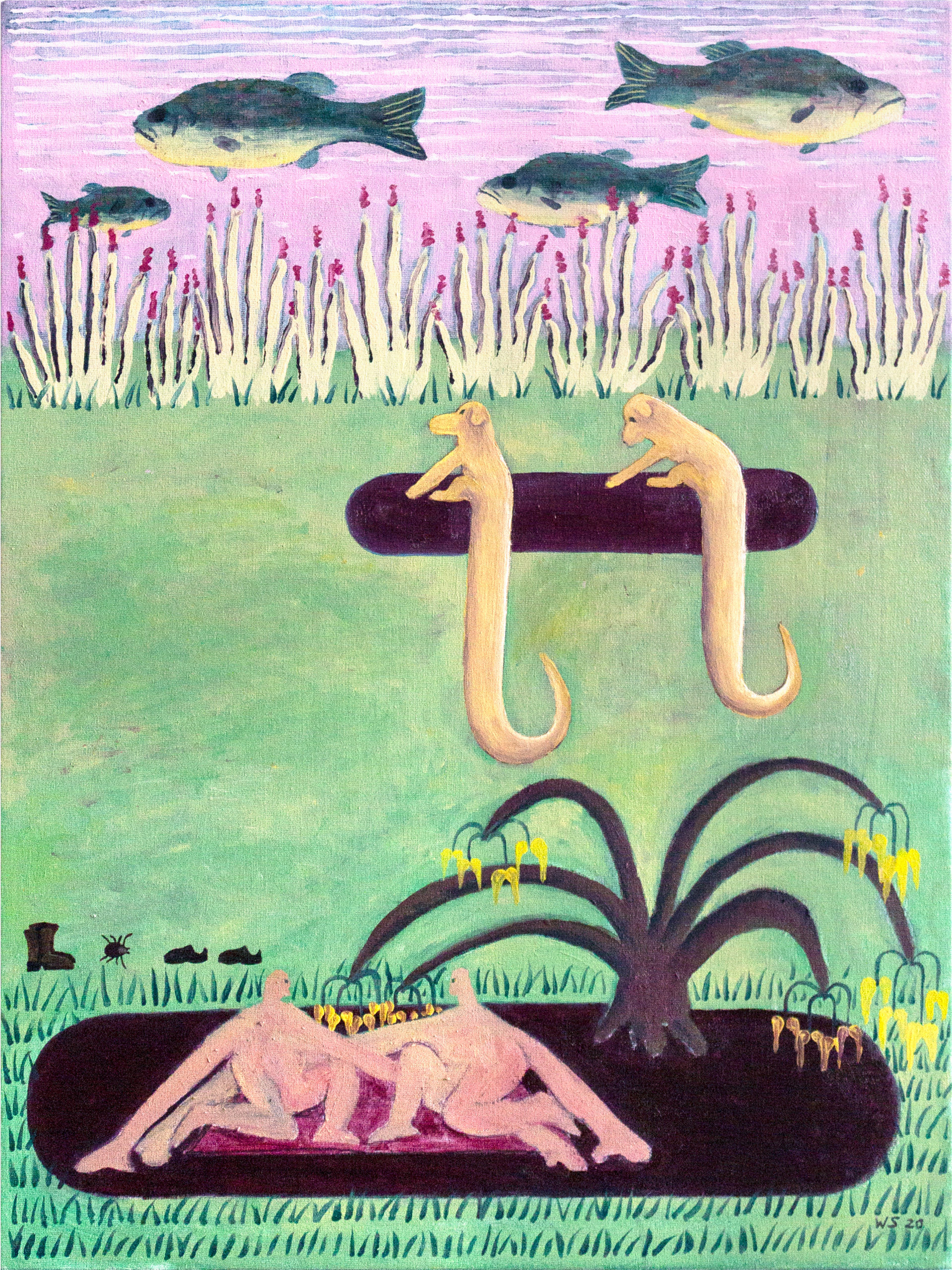 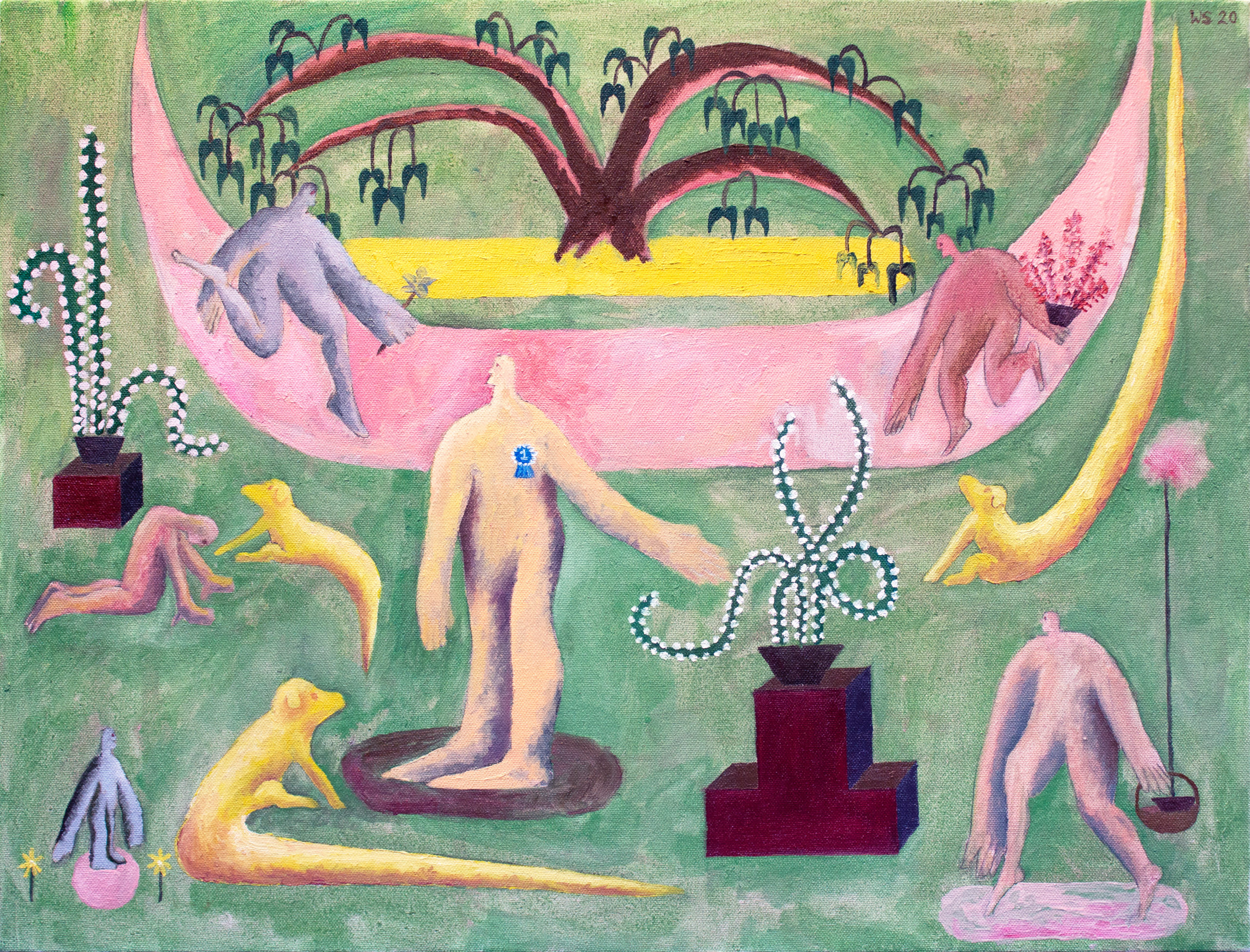 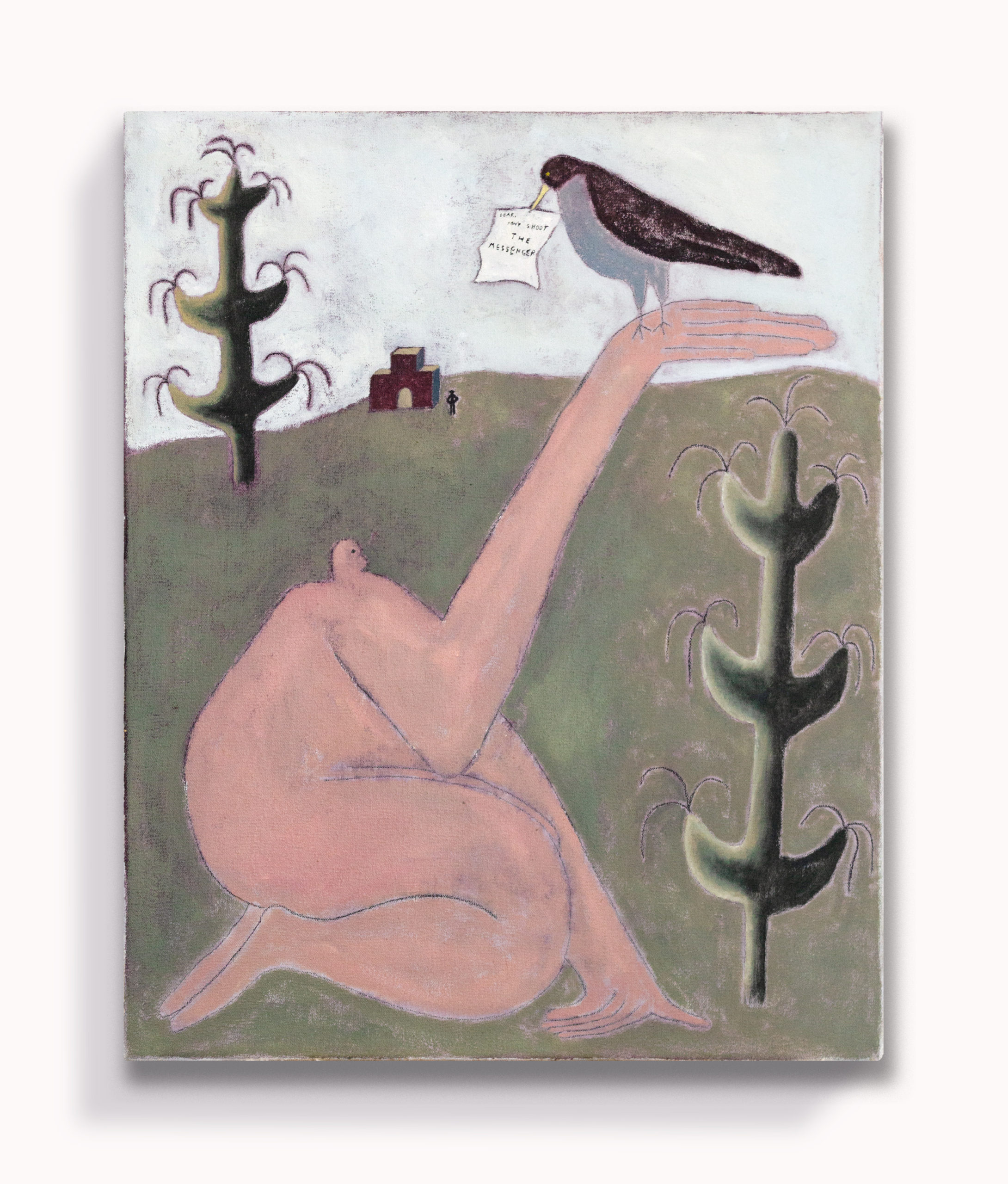 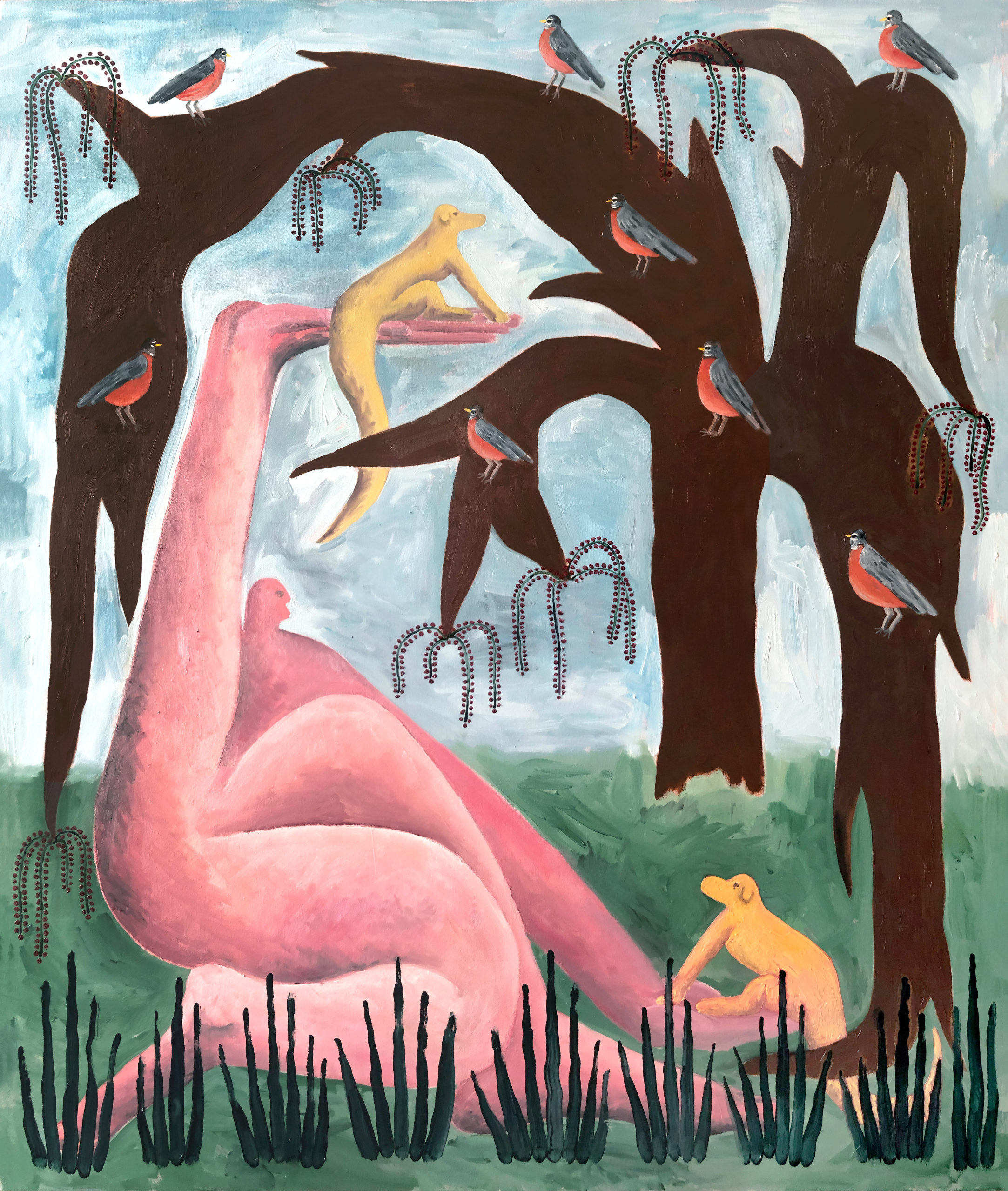 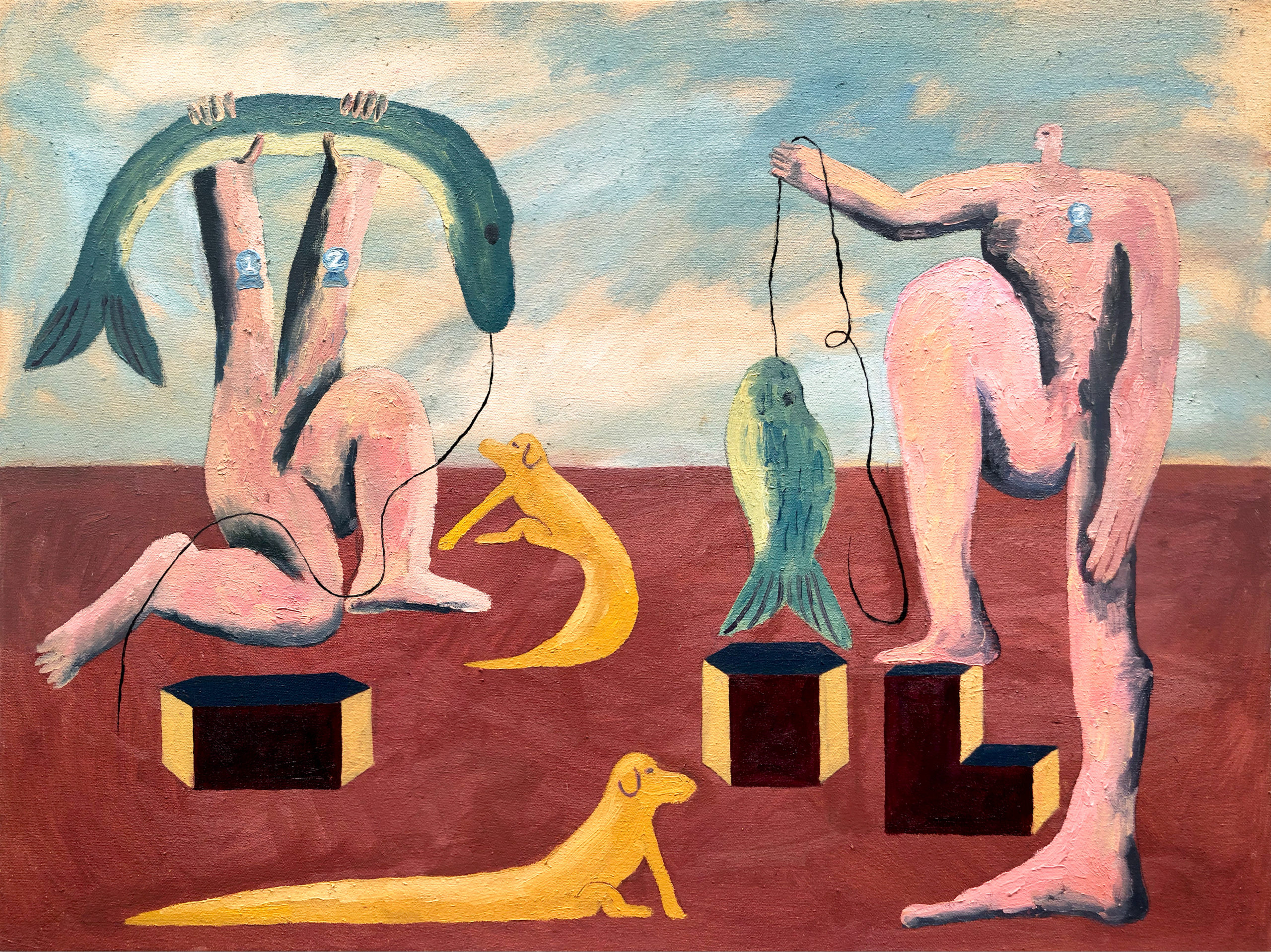 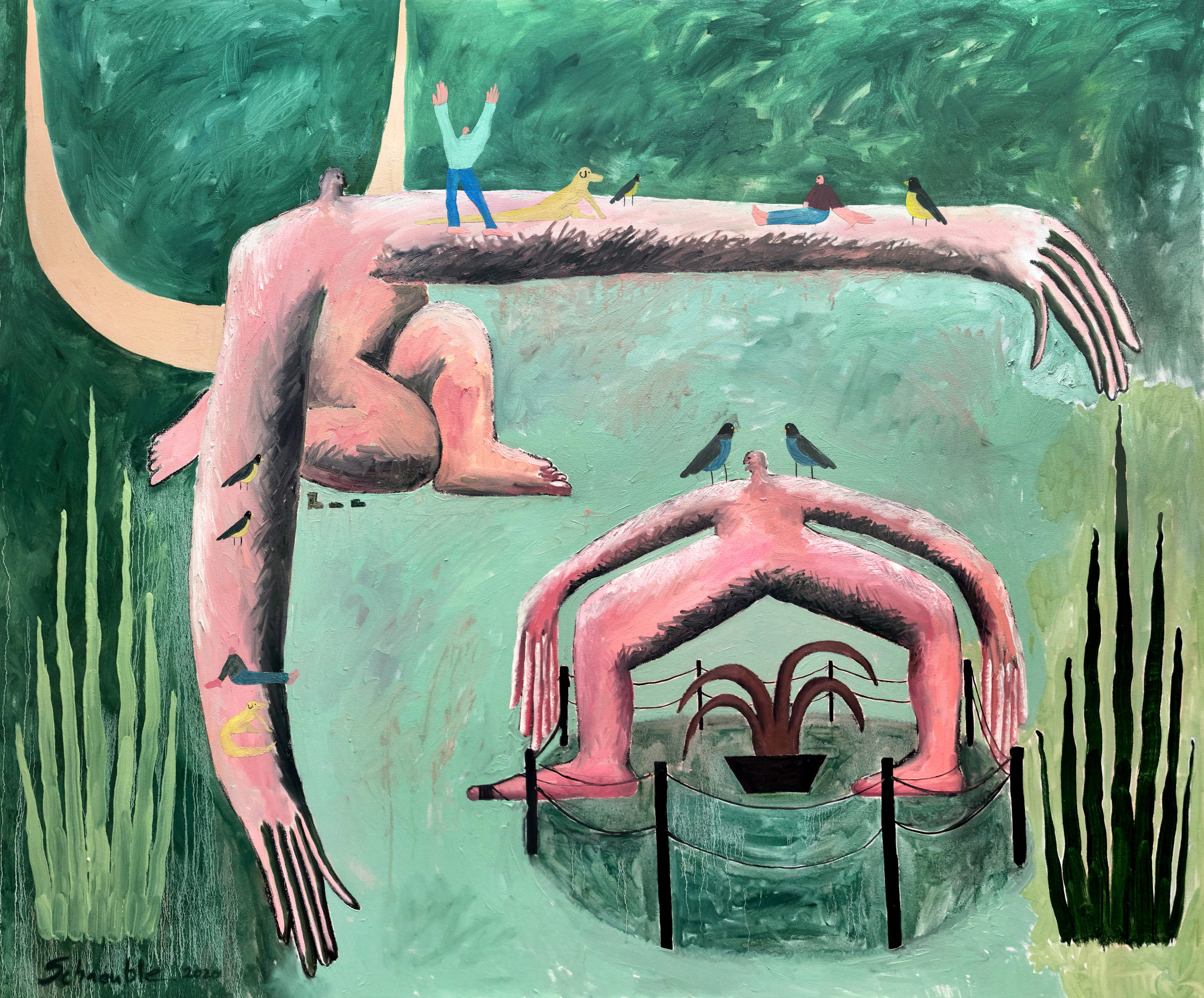 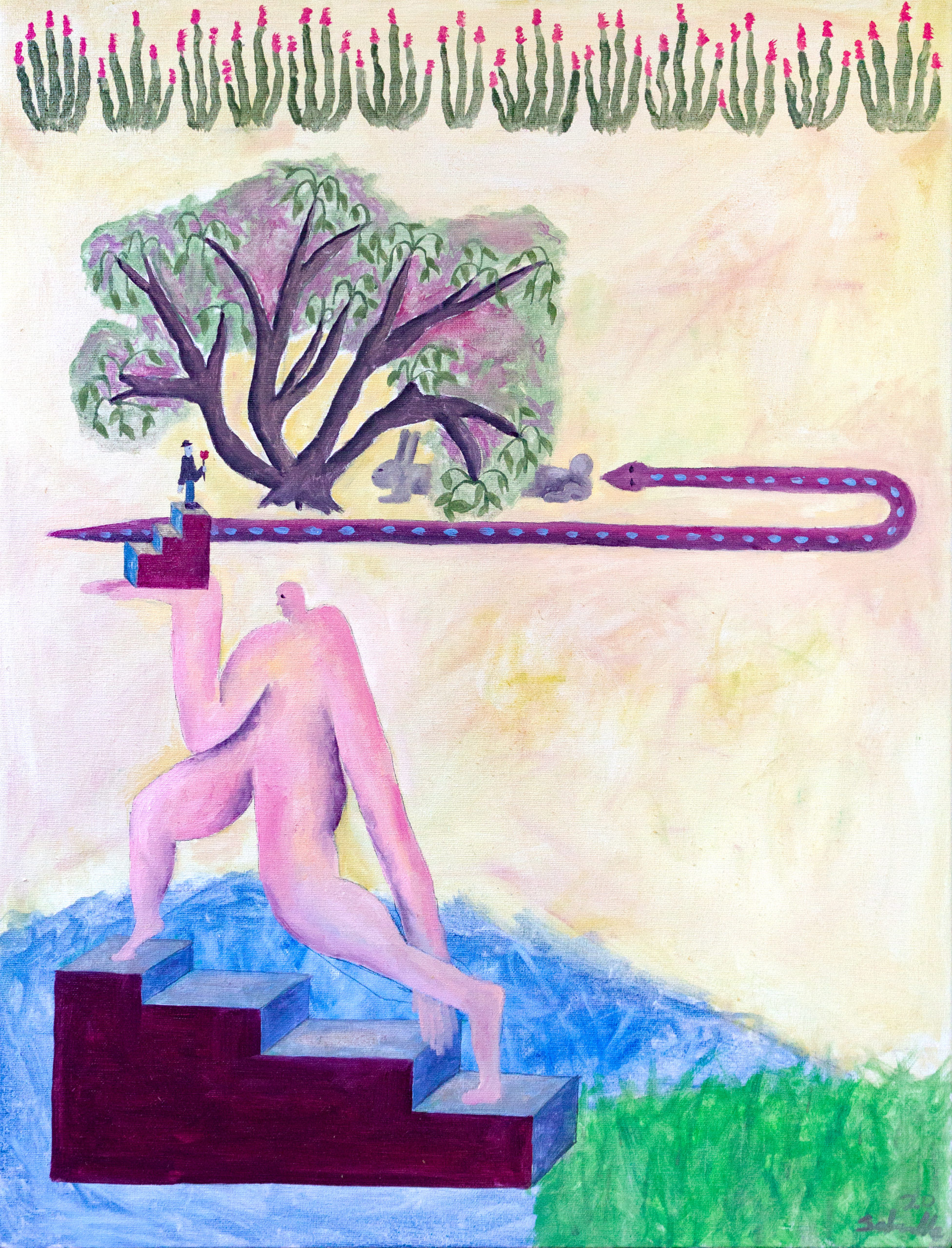 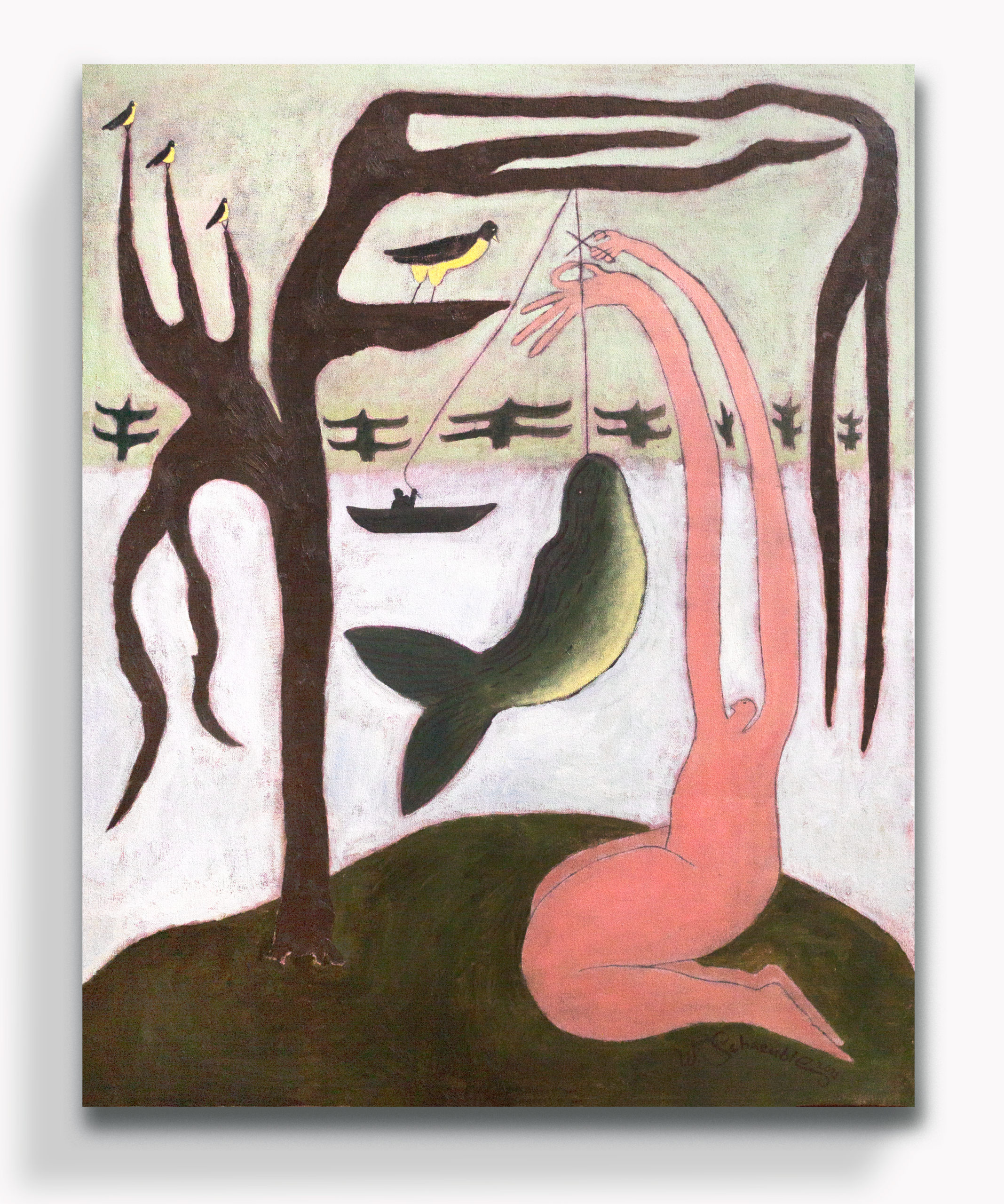 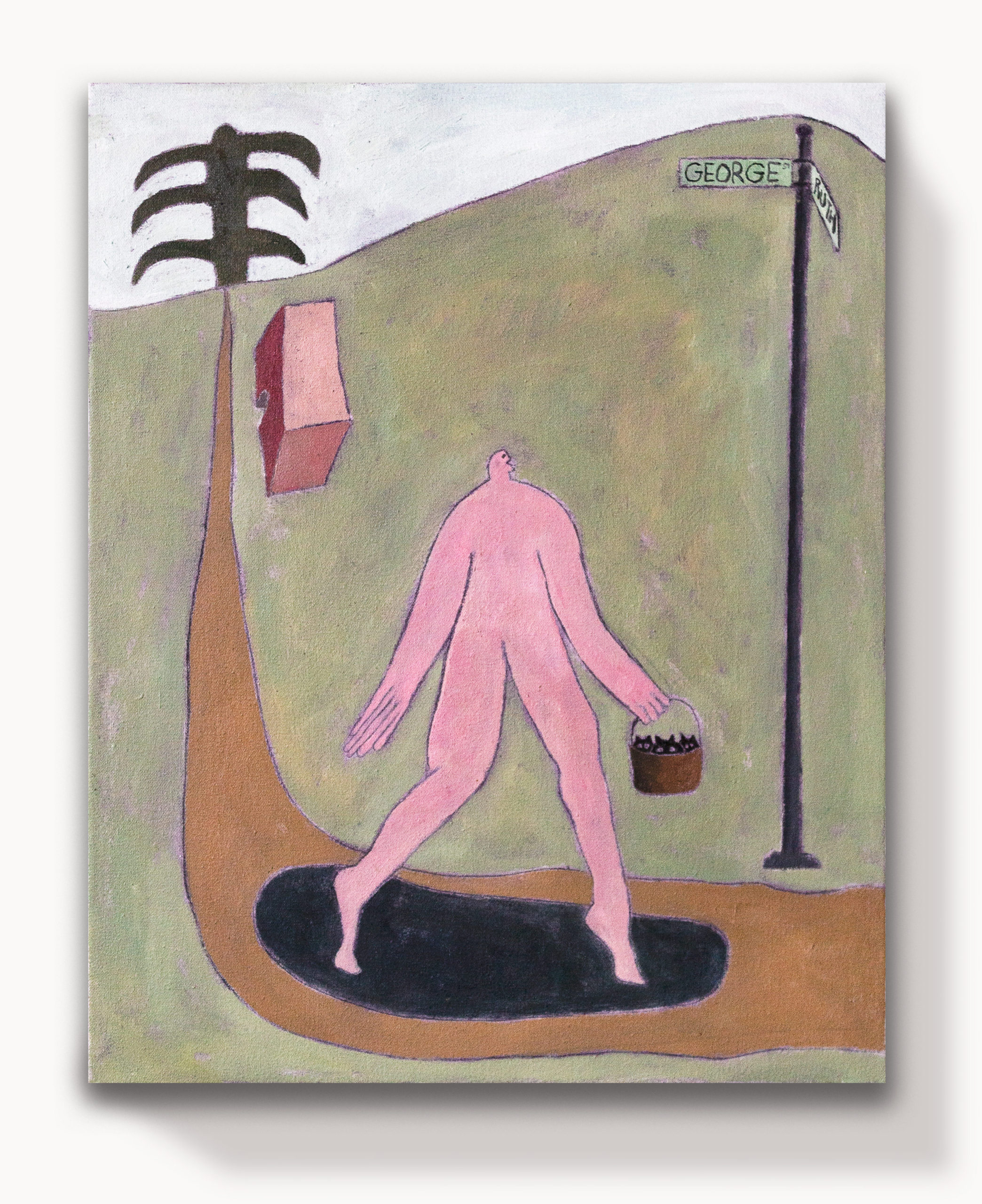 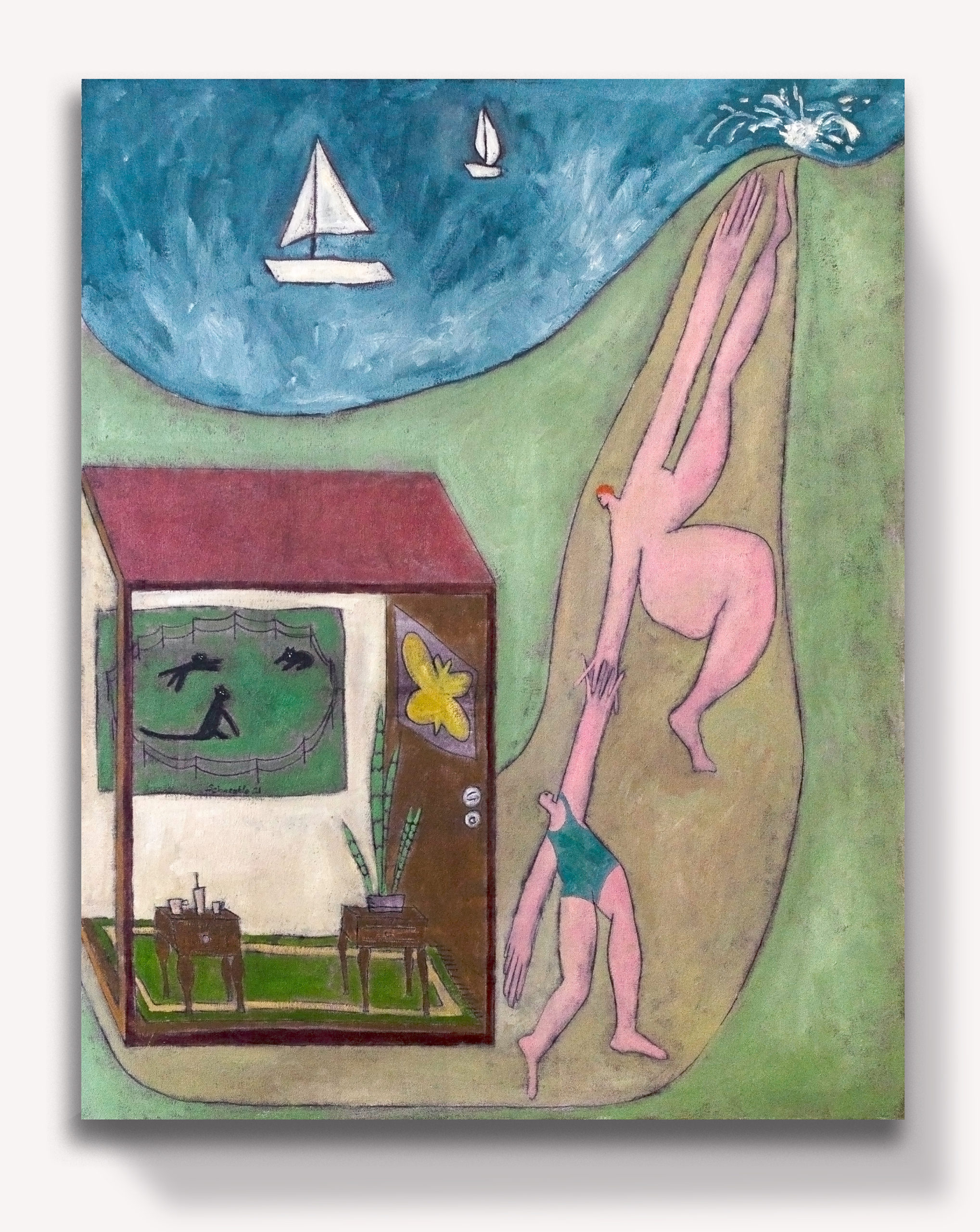 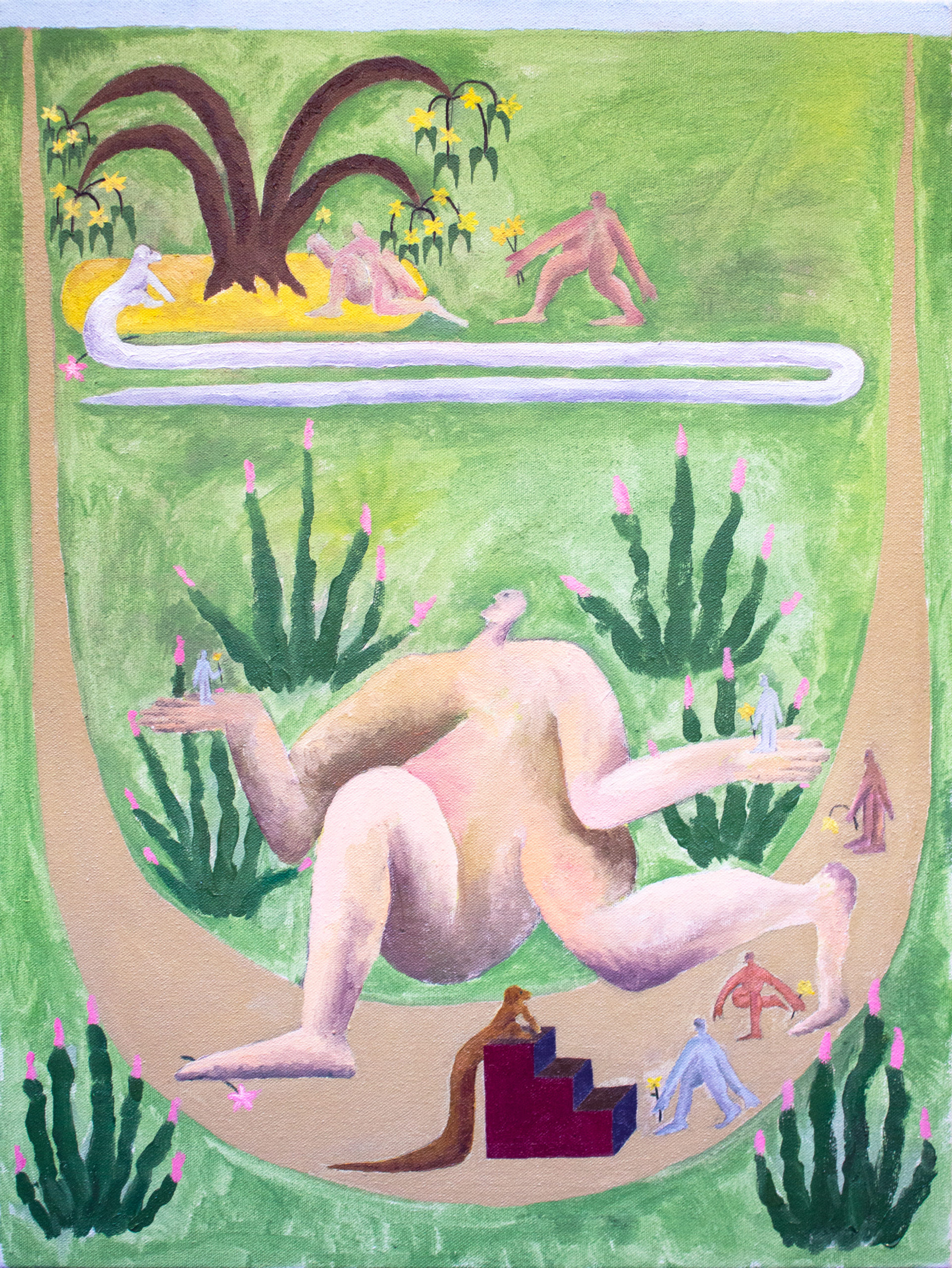 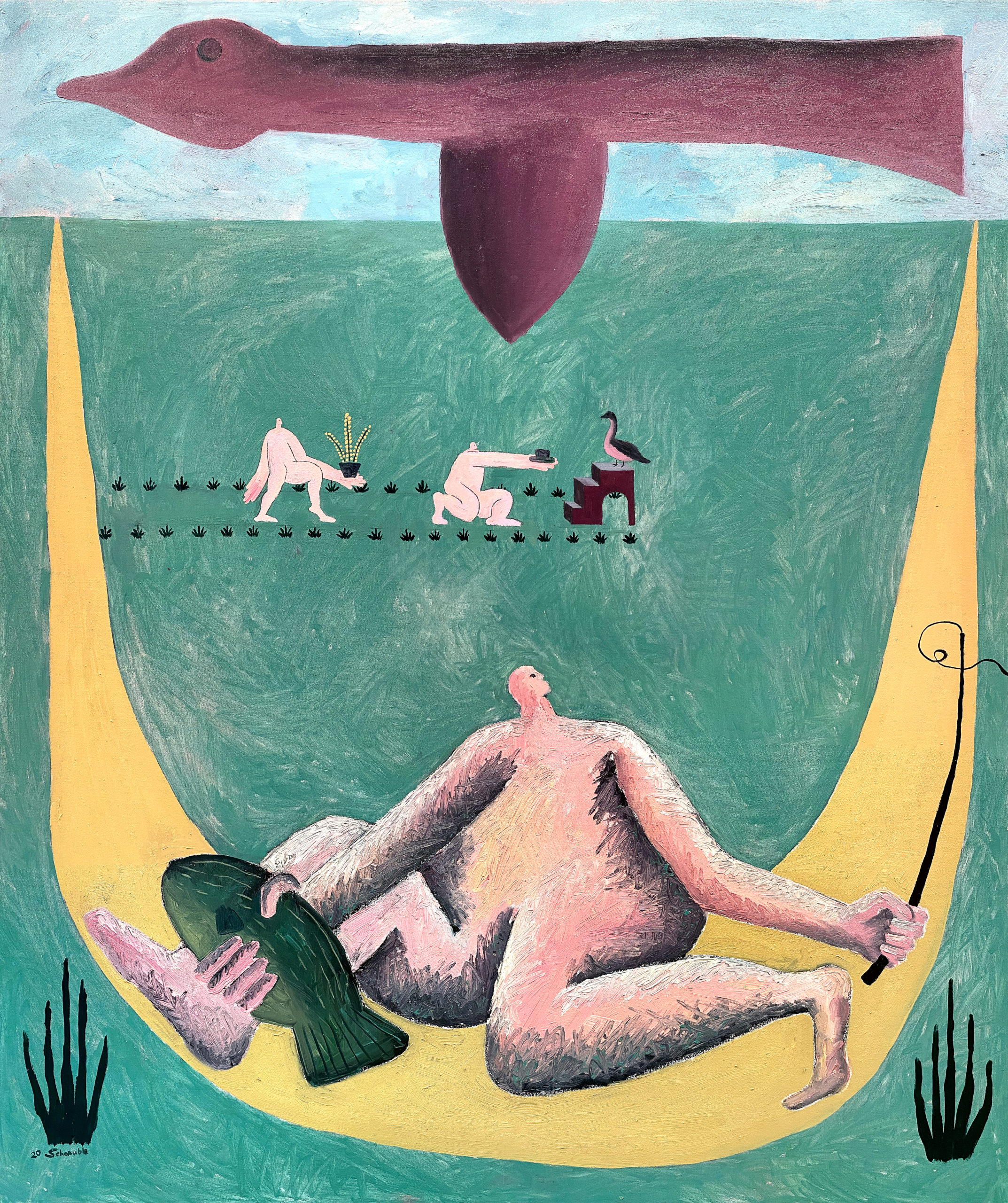 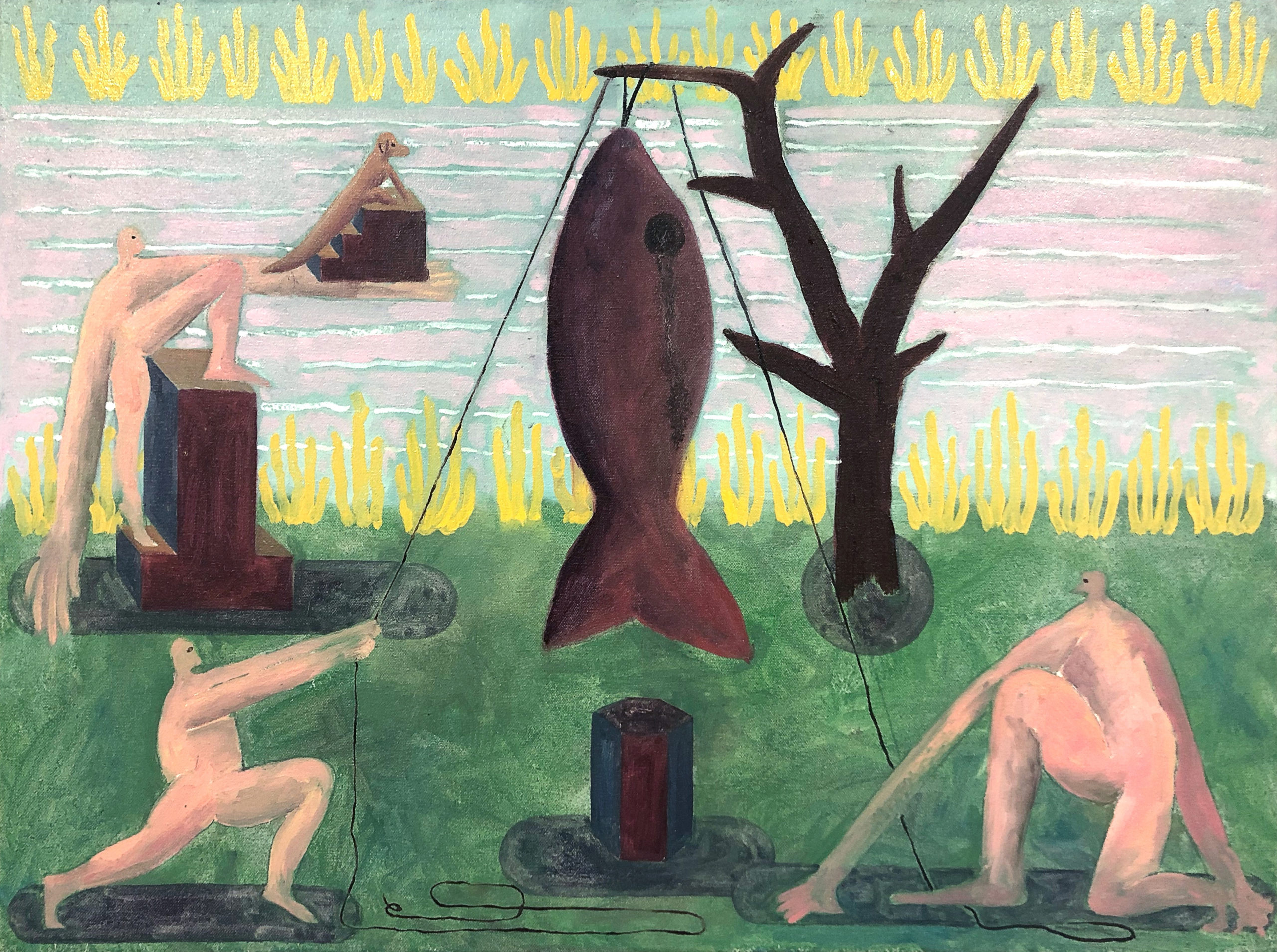 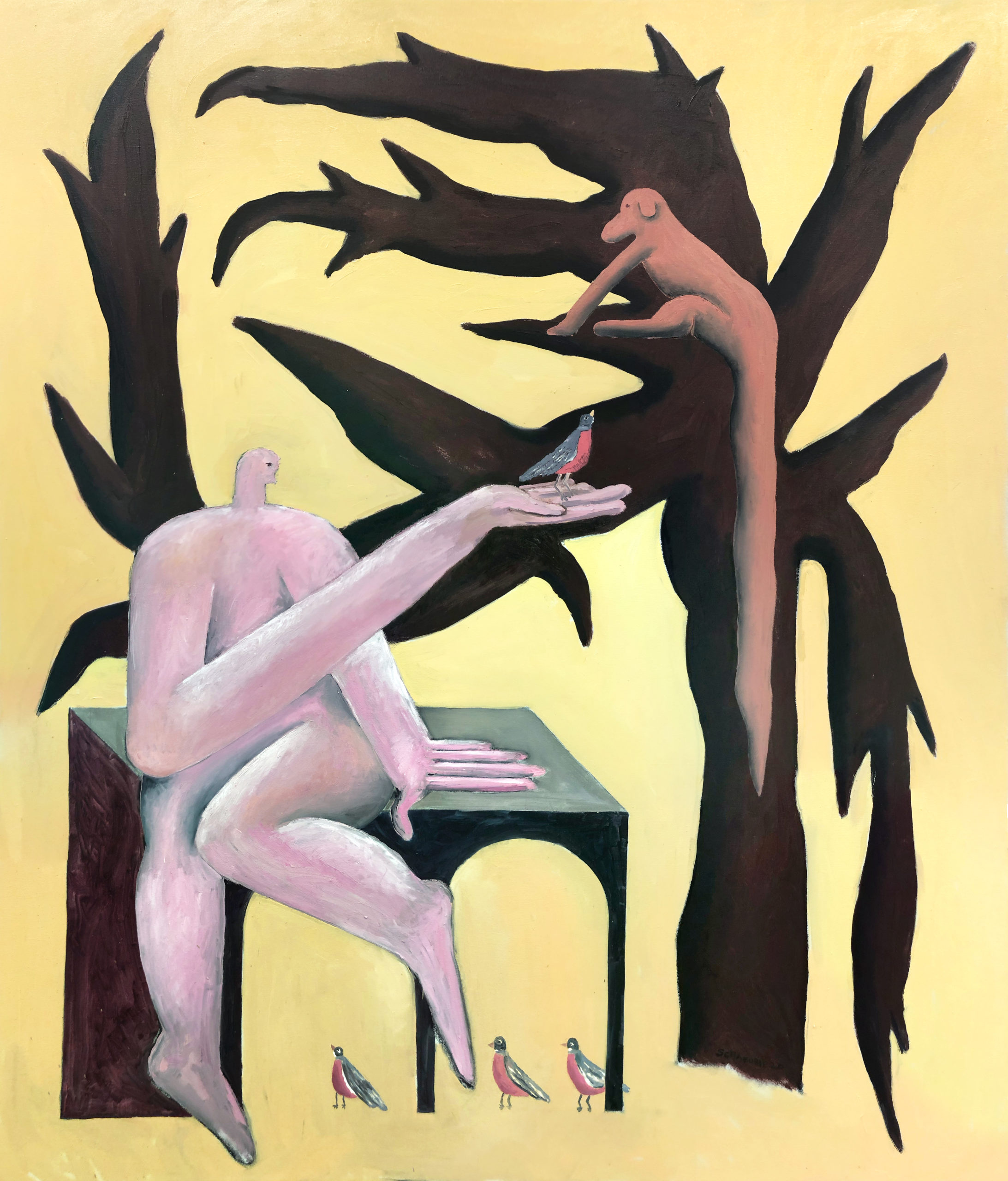 The large-limbed human figures which populate William Schaeuble’s paintings are limber and dynamic, with the childlike capacity to move swiftly back and forth between energy and lethargy, athleticism and languorous, slack-limbed repose. In William’s images, the bald, androgynous and amorphous pink bodies recline on stretches of grass, go fishing, pick flowers, take part in ambiguous sporting activities, cavort with birds, dogs, cats and snakes. The landscapes they inhabit are green-grassed and blue-skied, reminiscent of the broad, flat horizons of William’s childhood home in Iowa. Wide plains stretch on beyond the paintings’ borders, punctuated by splayed trees, finger-like shrubs and, bizarrely, isolated sets of stairs.

There is a surreality to the environments William depicts, upheld by the absurdist humour with which he renders his subjects. In ‘Baby Shower’, a procession of figures makes its way along the outstretched arm of a larger crouching figure to present a tendrillar plant to a bird in a nest. In ‘Lots Of Birds Going Into A Tree’, a naked figure in a hammock uses its long arm to deposit small birds at the bottom of a staircase leading up towards a thick-branched tree. In ‘Road Side Attraction’, another naked figure paces among sitting dogs with tails that stretch halfway across the canvas. The nakedness of William’s human subjects is important; his edenic scenes represent a humanity which exists either pre- or post-civilisation – perhaps both. In their interactions with other creatures, humans themselves have become more bestial, and clothing has become redundant. Yet, on this point too, William interjects with an element of the absurd, saying that, actually, “They are all naked because they’re all incredibly picky dressers”, accounting for the rare glimpse we get in his work of a pair of boots, or a single rosette pinned to a bare chest.

William’s works reject pretension, opting instead for a symbolic ambiguity and surreal humour in which narratives imposed by viewers lead either to comically banal explanations or to ridiculous conclusions. The essential intent, William tells us, is to create what he calls: “Paintings About Nothing”. 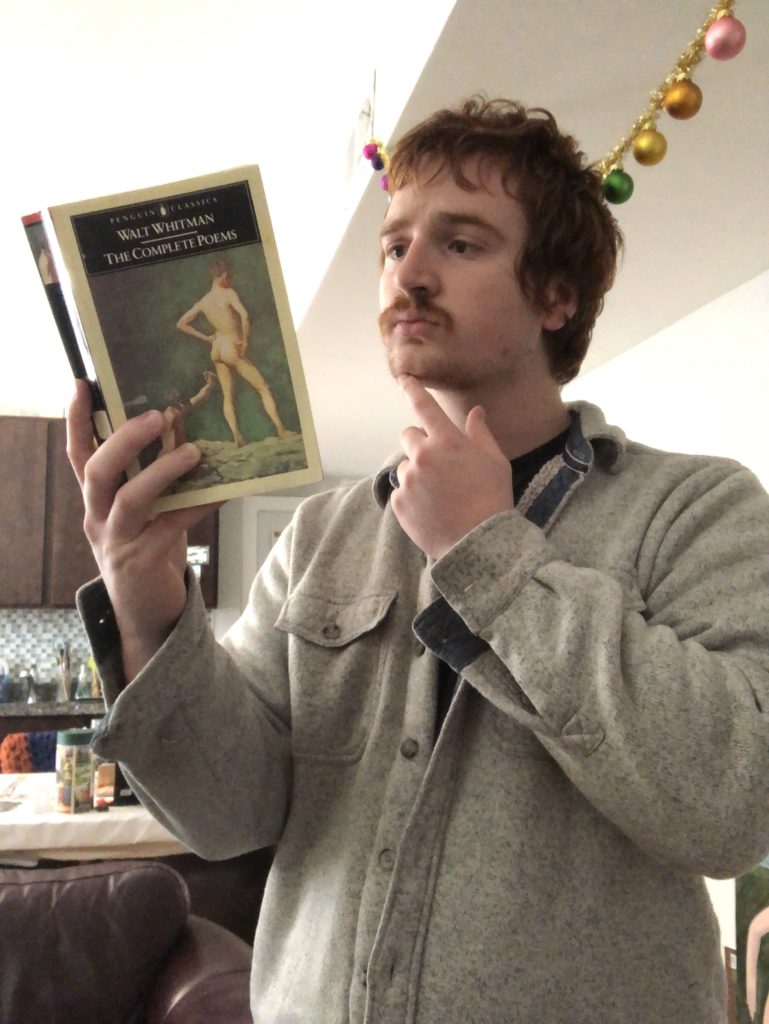 AMM: Hi William! We love the immersive, surreal perspectives your work presents. Can you tell us about the world depicted in your paintings?

WS: Although I have been asked this question many times, I have yet to come up with a reasonable answer that would satisfy viewers of my work. Sometimes I imagine these paintings being what I will see when I look out of my window to my backyard some amount of years in the future. Or maybe I’m painting the world far into the past or the future, when humans are back being normal animals like horses or squirrels. If the world ended and the only ones to live were a couple of dogs, birds and bald people, what would they do? What kind of trouble would they get themselves into? Is that even what I’m painting? – not really, but it’s as good of an answer as I’ll get.

AMM: Are the scenes you paint purely imaginary or do they have a resonance with your experience of reality?

WS: I grew up in Iowa, where I was surrounded by wide open flat landscapes. I suppose that’s where the flat horizons come from in my work, I always imagine them as going on forever. Each piece starts out with a little spark of reality, something that comes from real life, which I somehow grow into a much more immersive scene. I was painting a lot of dogs because I went back home for the summer and was with my family’s dogs all the time. My partner and I just adopted three cats so now I find myself painting cats. I paint a lot of naked people because I’m always imagining people with their clothes off (it’s a nerves thing). It’s the ‘art imitates life’ idea. I started pond fishing a lot so, surprise surprise, I started painting a lot of fish. I paint what I know from reality and try to add some absurd humour to it. Reality can be boring so it’s important to spice it up. 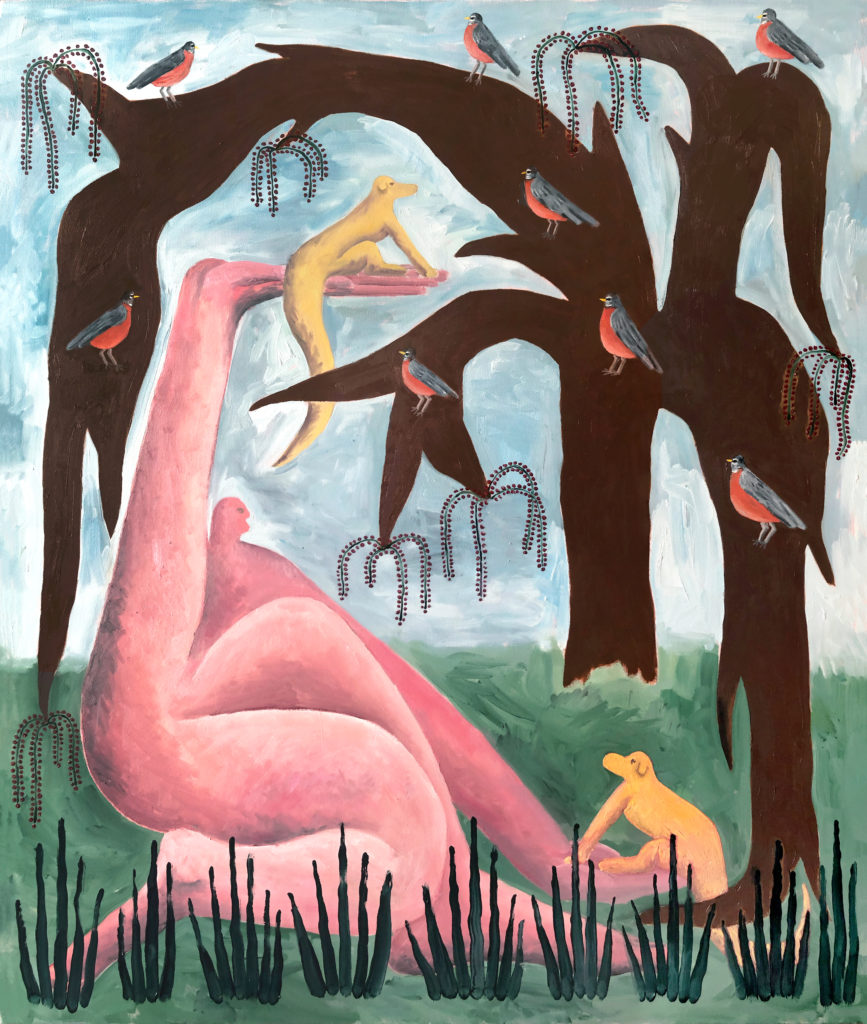 AMM: There’s a certain comedic absurdity present in many of your works – dogs with tails that spiral across the compositions, naked figures hauling huge fish on lines, stretched and exaggerated bodily proportions and postures. What role does humour play in your work?

WS: I often call my work ‘Paintings About Nothing’, taken, of course, by the great Seinfeld line ‘A Show About Nothing’. And often I see similarities between my work and Seinfeld in that neither of us tells stories which carry a great amount of significance. I don’t take my work too seriously when it comes to narrative; I’m not trying to ask hard questions about life (because they are impossible to answer) but rather paint a pretty picture with a punchline and perhaps if someone wants to look hard enough they can find their own personal insights. Art that takes itself too seriously is, most of the time, hard to take seriously. I have an exercise where I take two separate ideas and work out what it is that relates them, then run with that outcome. For example, worms are used as fishing bait, but also worms are eaten by birds… So can you go fishing for birds? There is humour in situations like that. It’s all about finding mundane situations and turning them into something odd enough to laugh at. There is a lot we can learn from everyday life when looking at it in a different way.

AMM: The naked figure is a key component in your images; can you talk about the importance of nudity in your paintings? We’re interested, too, in the significance of the rare items of clothing that appear sporadically in your work – a pair of boots, shorts or a pin badge.

WS: They are all naked because they’re all incredibly picky dressers. Most people don’t know this, but they are actually all really into contemporary fashion, so much so that they are unable to pick between their outfits. Being naked just causes less stress for everyone. Although, every once in a while, they say screw it and wear a pair of favourite boots, or shorts. 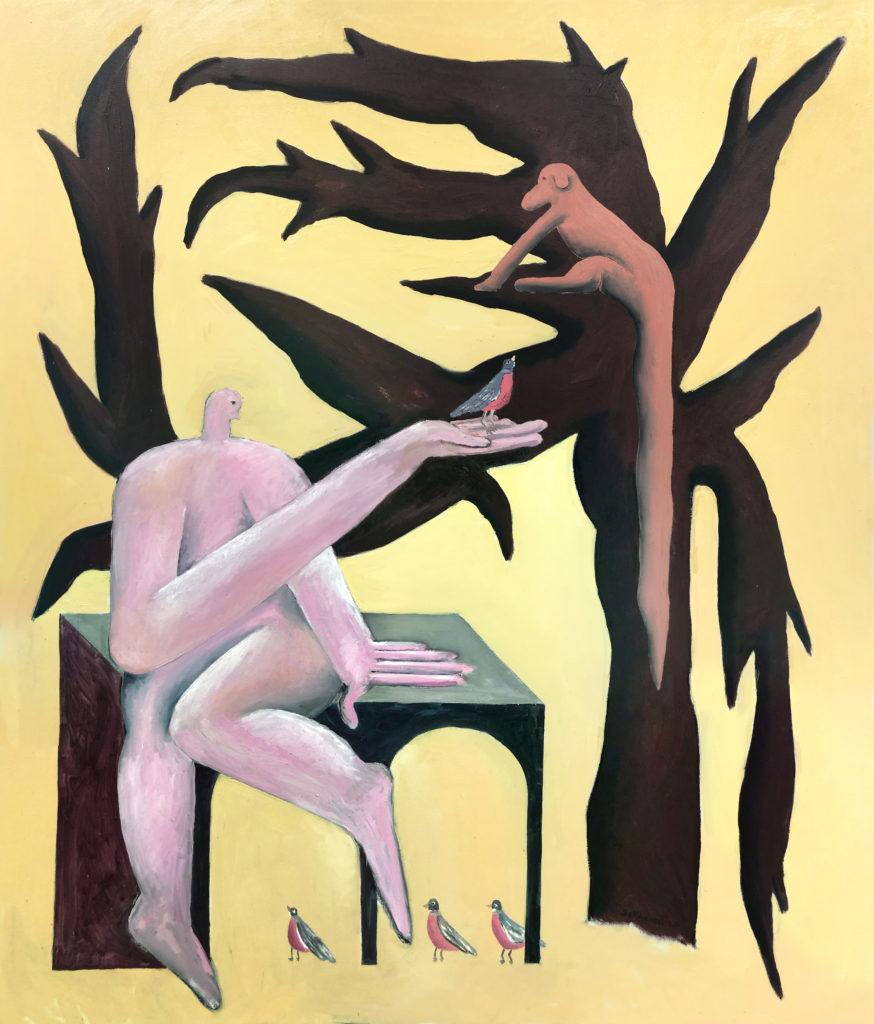 AMM: How does your work understand and represent interactions between humans and animals?

WS: In my work the humans and the animals are equal. There’s no real hierarchy; on average no one is better or more powerful than anyone else. Sometimes the dogs help the humans, sometimes the dogs rule over the humans, but it all evens out. The fish are always on the bottom (they don’t feel pain).

AMM: Certain animals and symbols seem to recur across your paintings, for example the fish, the dog, the staircase, the shrub and the tree with drooping blossoms. What’s the concept behind incorporating such symbolism into your work? What is it about certain symbols and iconography that you find compelling?

WS: I like painting symbols over and over because it allows me to get to know the images and start building a character in depth. I’ll do a painting with a dog doing something and from doing that one piece I’ll get four or five other ideas that can evolve the dog into something with a little more personality.

AMM: Something about your works on paper in particular puts us in mind of displayed collections – each object or figure precisely laid out and delineated within their allotted section of the page. Do you often use a sketchbook to ‘collect’ images which you will later incorporate into your work?

WS: My works on paper have sort of become a collection of puzzles, where each figure, form, plant or animal is a puzzle piece that has to be put down in a very specific spot in order to build the picture. I guess that’s how all my work is now, not just the works on paper. I’m not sure if that’s a good thing or not. I’m always adding new objects so I guess it’s being kept fresh. I do carry a sketchbook but I use it more for note taking and quick doodles. The collection of images is built through the works on paper themselves. I’ll start a drawing with something I’m more familiar with, a tree or a figure, and go from there, adding imagery that is either part of my inventory or inventing new images if the composition or narrative needs it. 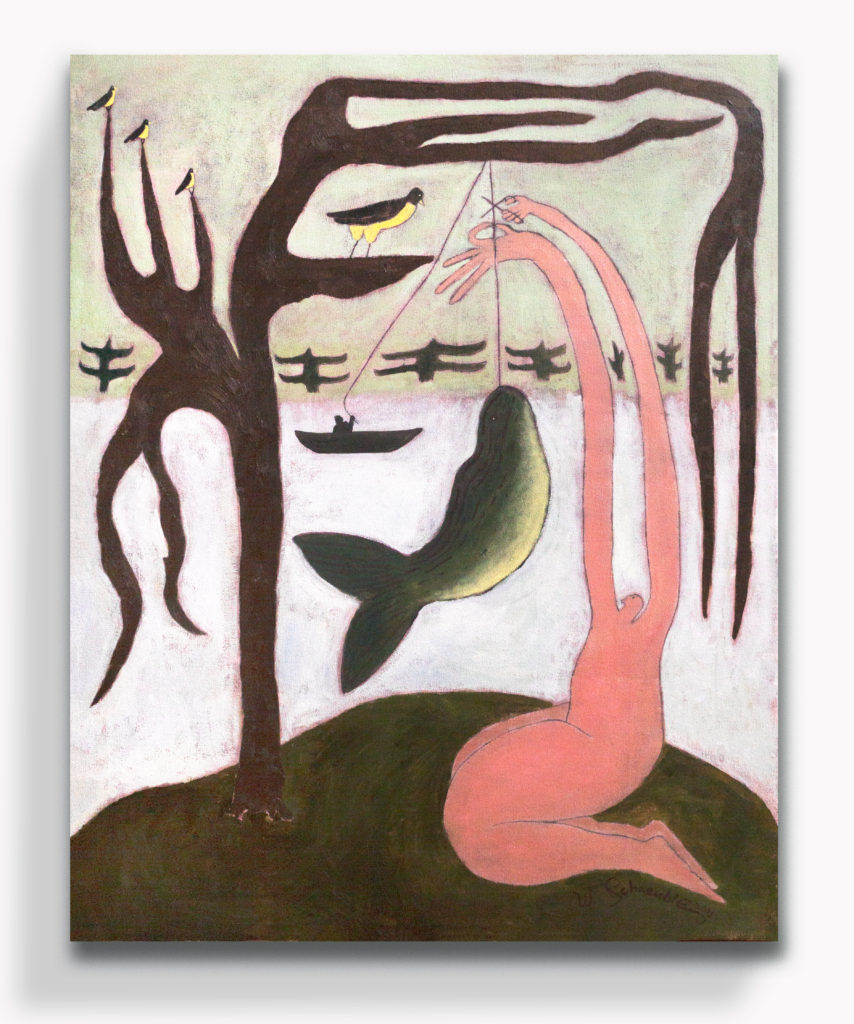 AMM: Can you tell us about your colour palette of high-contrast, bright hues and stark polarities of light and dark? What’s the thinking behind these chromatic decisions?

WS: There is little thinking behind the colours. They are pretty much all instinctual. When I’m mixing colours, I don’t know what I’m looking for, but I know when I get it. I am not particularly a fan of the contemporary trend of overly saturated colours that seem to burn your eyes, so I try to keep my colours relatively soft.

AMM: Your compositions offset the viewer’s experience of spatiality, proportion and depth. How does your work deal with perspective?

WS: I took an architecture class for one semester a year or two ago where I was introduced to the idea of isometric drawing – drawings that are three-dimensional but don’t have any foreshortening or distortion due to perspectival depth. I liked the idea of there not being a perspectival point of view, but rather using the proximity to the horizontal line to show depth.

AMM: Where do you look to for inspiration? Are your influences strictly visual or do you tend to branch into other forms of artistic expression when seeking creative stimulation? 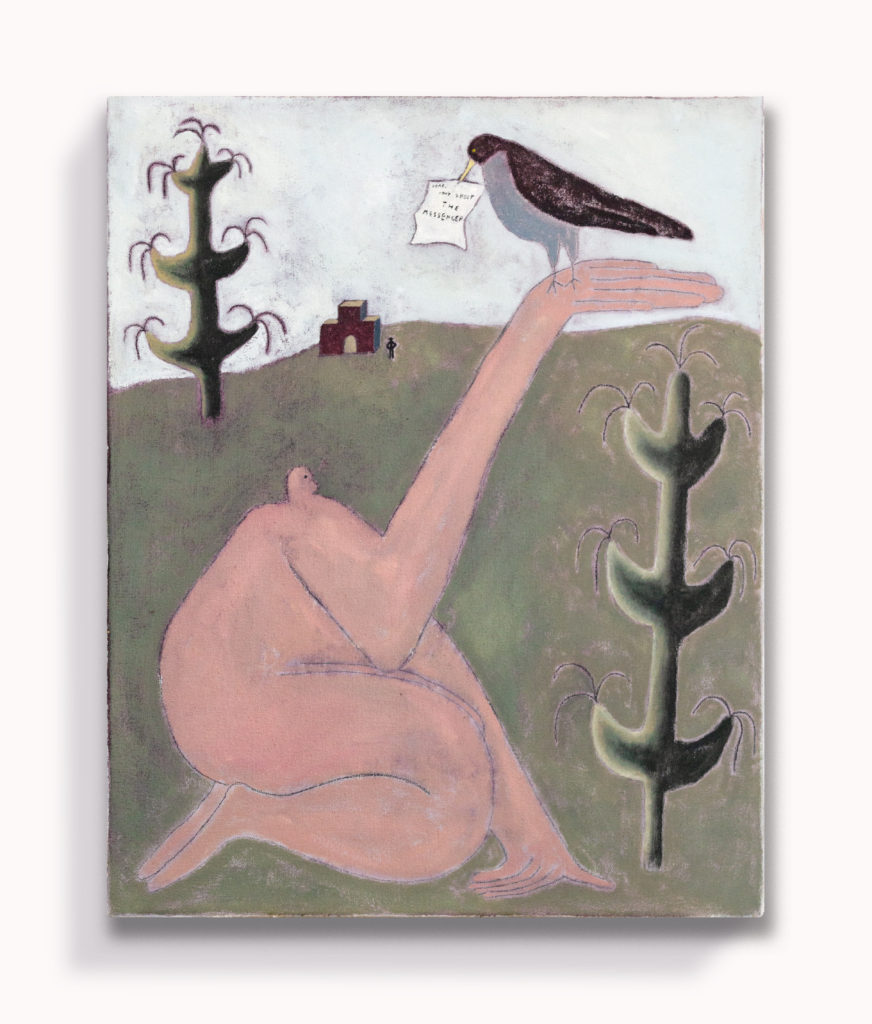 AMM: Are there any artists currently working whose art you feel a particular affinity with? Is being part of a creative community something that’s important to you?

WS: I have been looking at the work of James Mortimer, a wonderful English painter. When I found his work, it ruined my life for a day or two. I wished I could paint like him, but I quickly got over it when I realised if I wanted to paint like him I’d only be able to make around ten paintings a year. I like making a lot more than that. I can’t think of anyone else who has had as much of an impact on me. For the most part I keep to myself and pay little attention to the who’s who of contemporary painting. For how much I make art, I don’t look at art nearly as much as one would think.

AMM: What steered you towards creative pursuits when you were growing up in Iowa?

WS: I loved growing up in Iowa very much. My parents were always encouraging me to draw and colour when I was really little. They pushed me towards fine art and when high school came along and I could sign up for art classes I already knew I wanted to pursue the arts. Maybe because there isn’t a ton to do in central Iowa, but committing a lot of time teaching myself to paint and draw at home was the most fun I had. 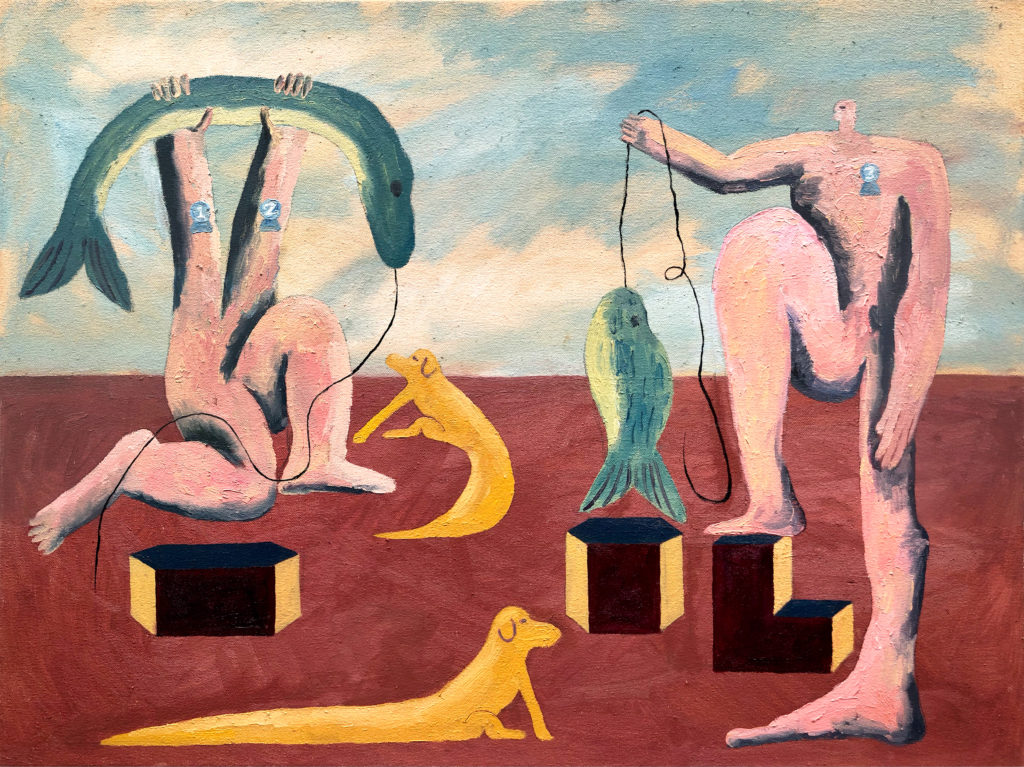 AMM: Has living, studying and working in different places had an impact on the way you work?

WS: Yes, big time! Before I had moved to Chicago, I never saw the Midwest landscape as a point of inspiration. It wasn’t until I had been in Chicago for a couple months that I realised most of my work was closely related to where I had grown up, with similar themes and imagery. It was then that I started paying much closer attention to my surroundings and noticed what it was that was sneaking into my work without me realising it, and asking why.

AMM: Currently, what are you thinking about or exploring in your practice?

Find out more about the artist: www.williamschaeuble.com 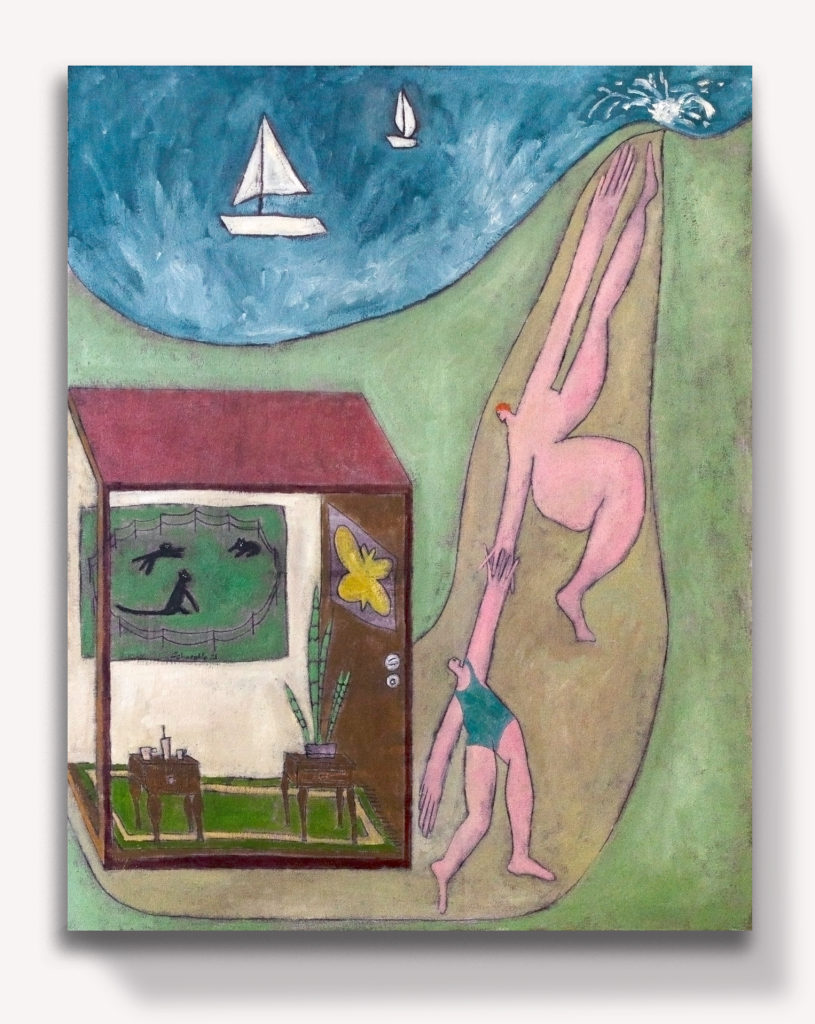 ‘An Even Bigger Splash (Door Is Locked)’, oil on canvas