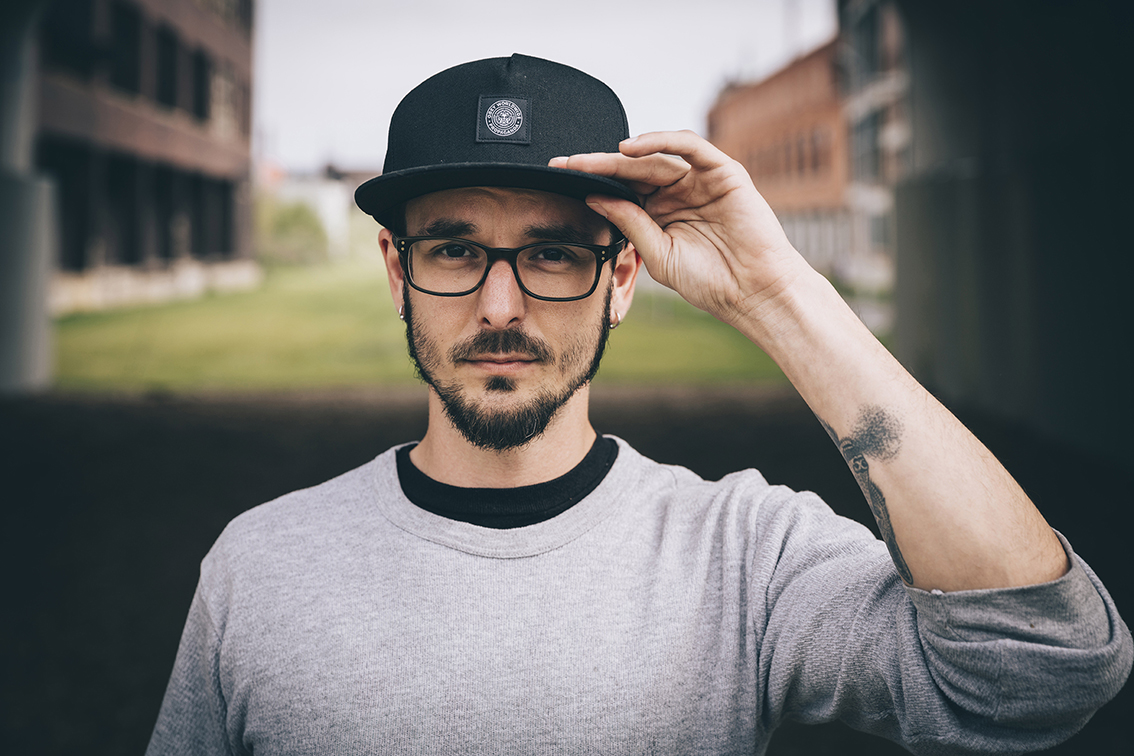 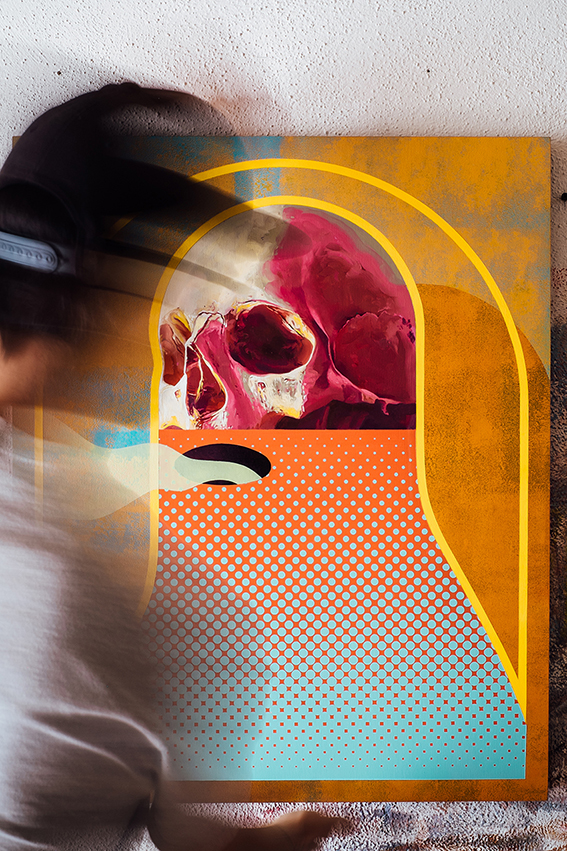 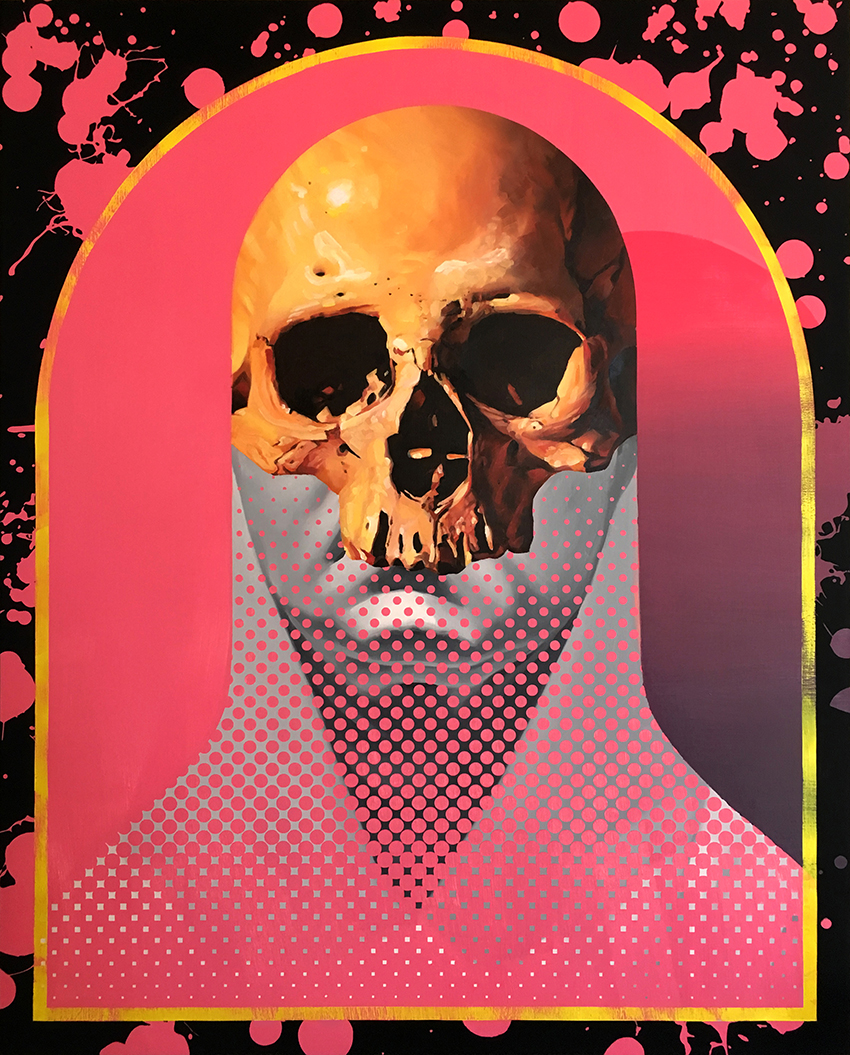 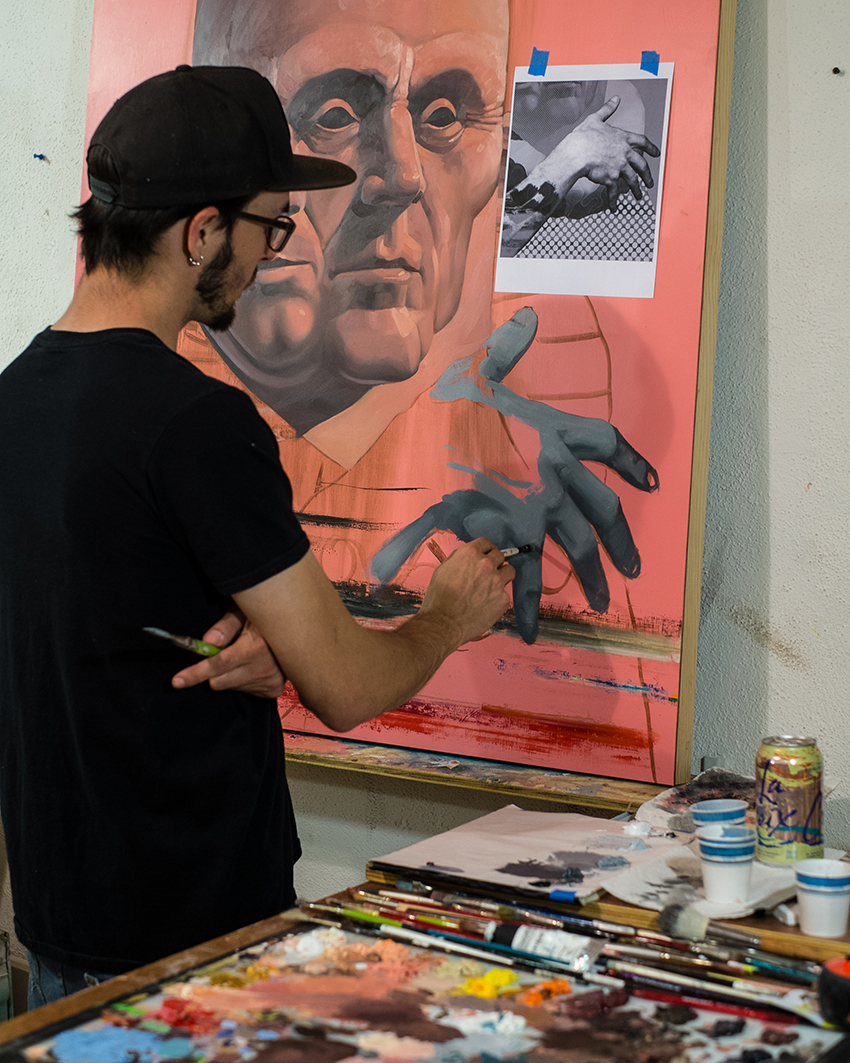 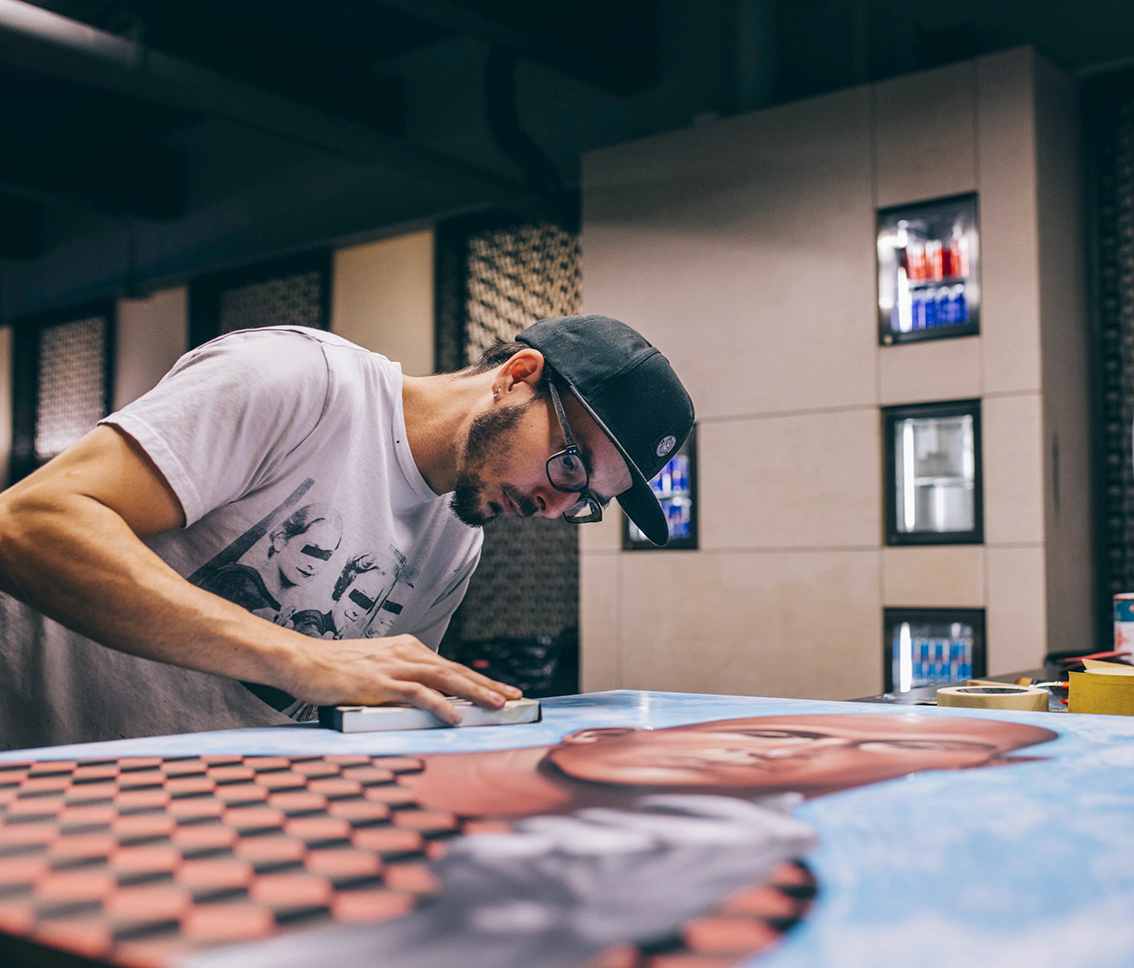 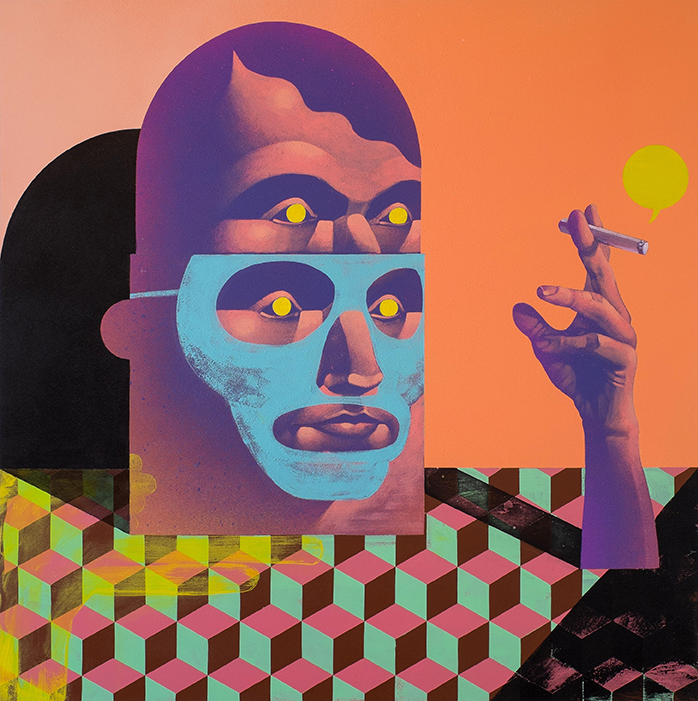 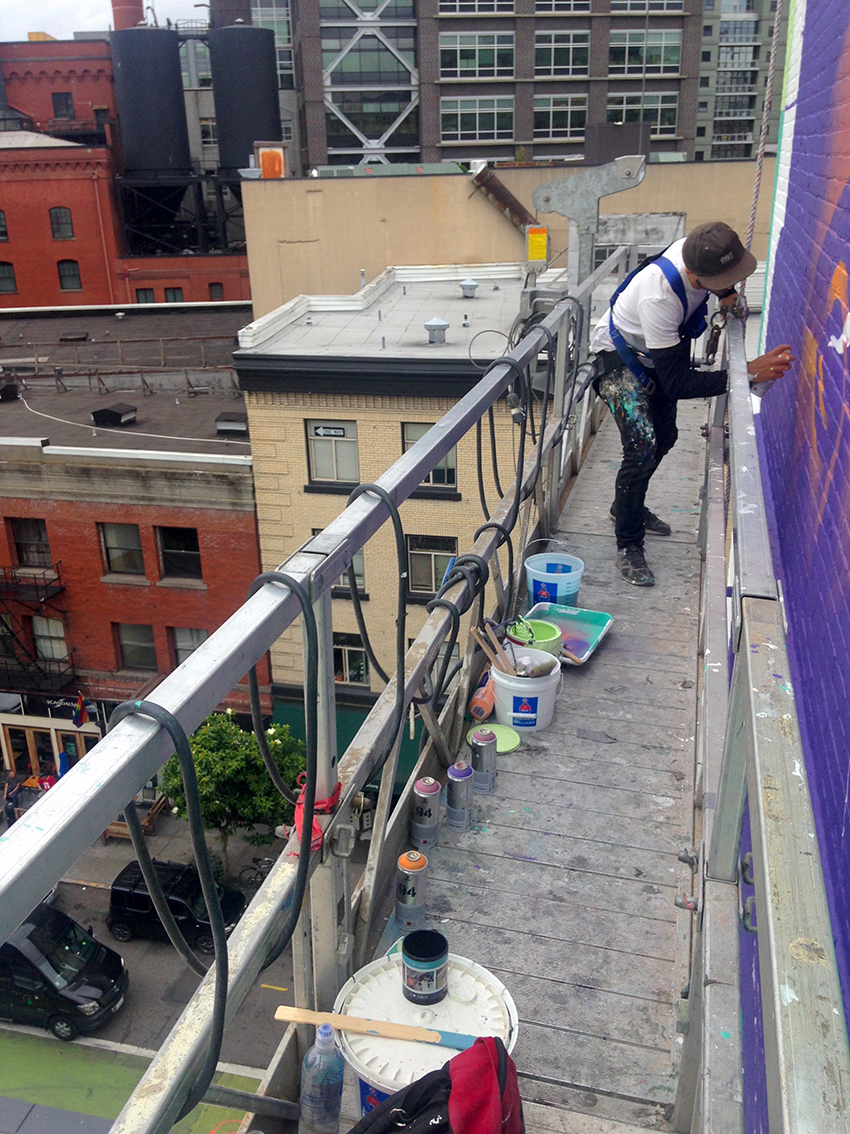 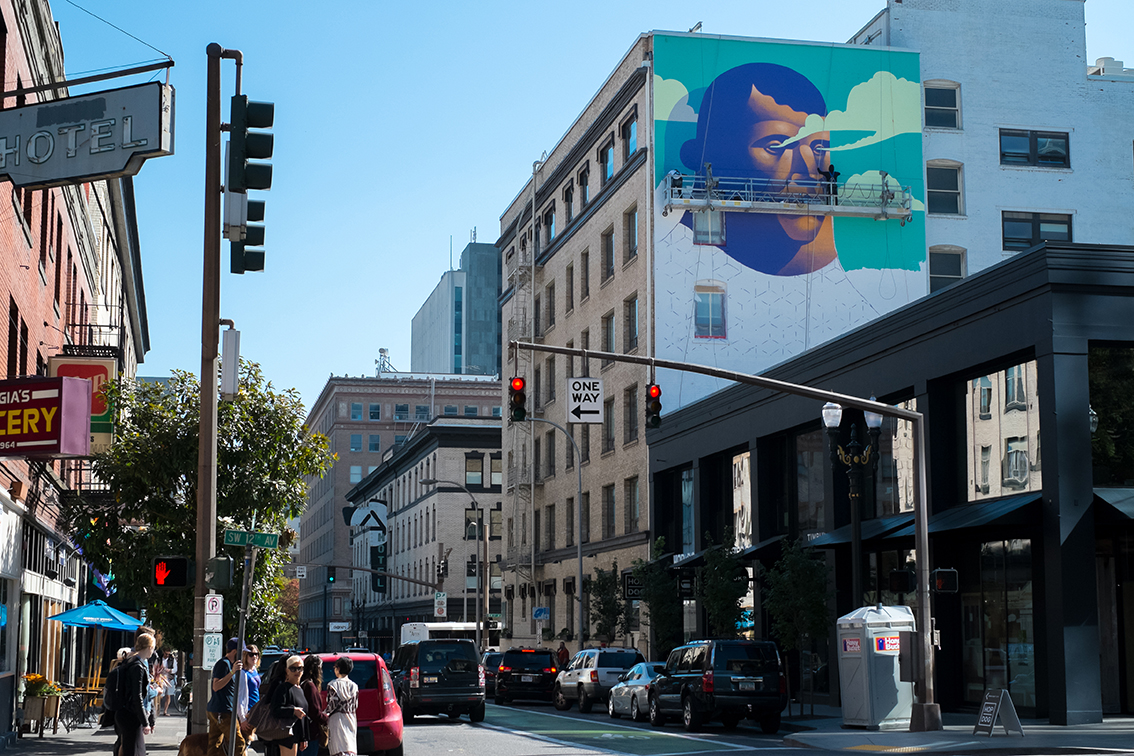 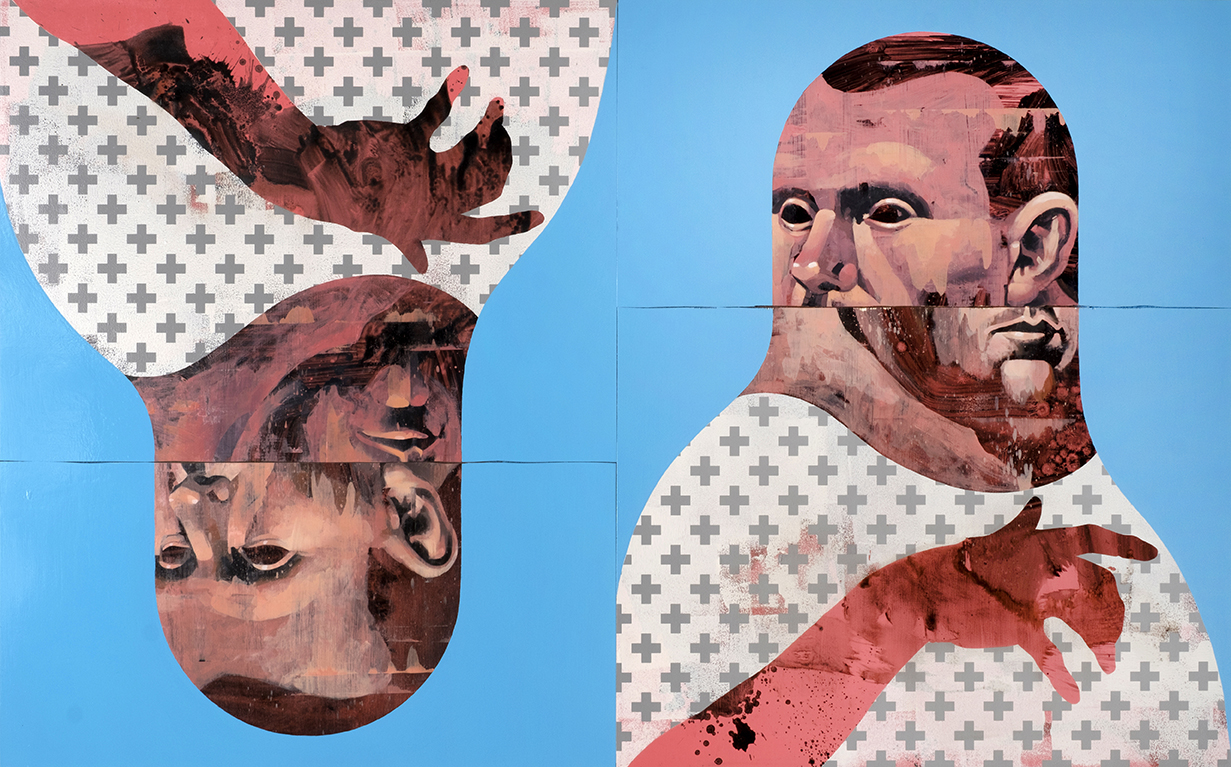 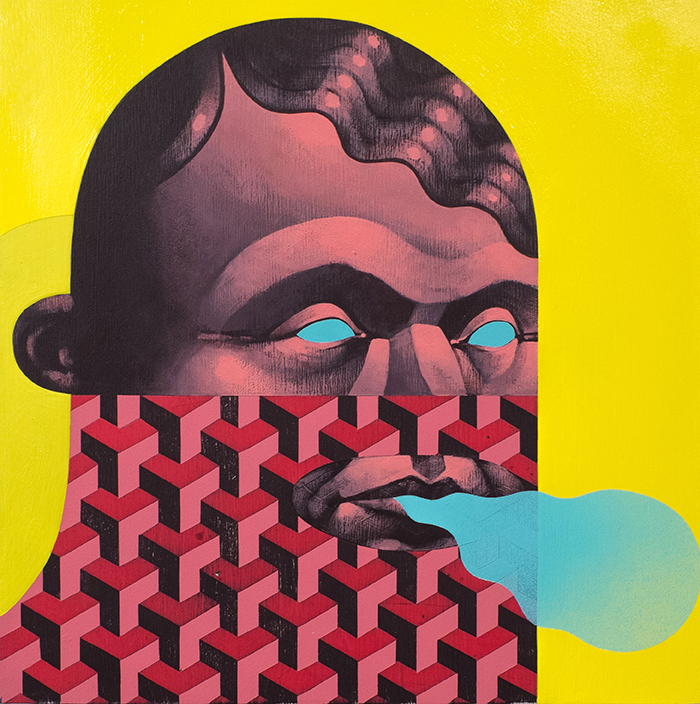 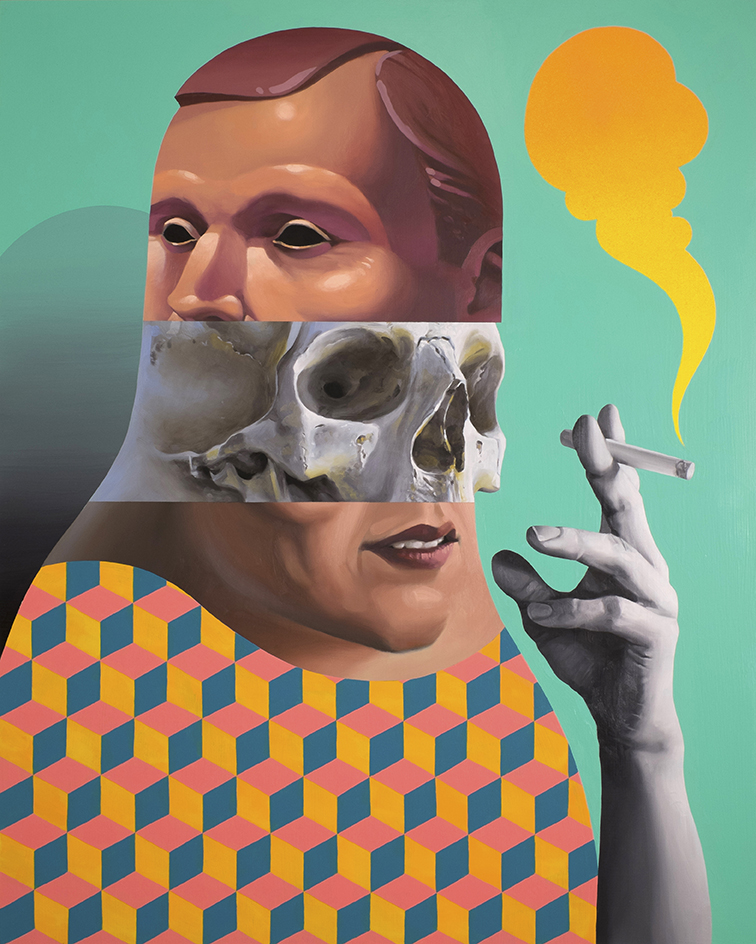 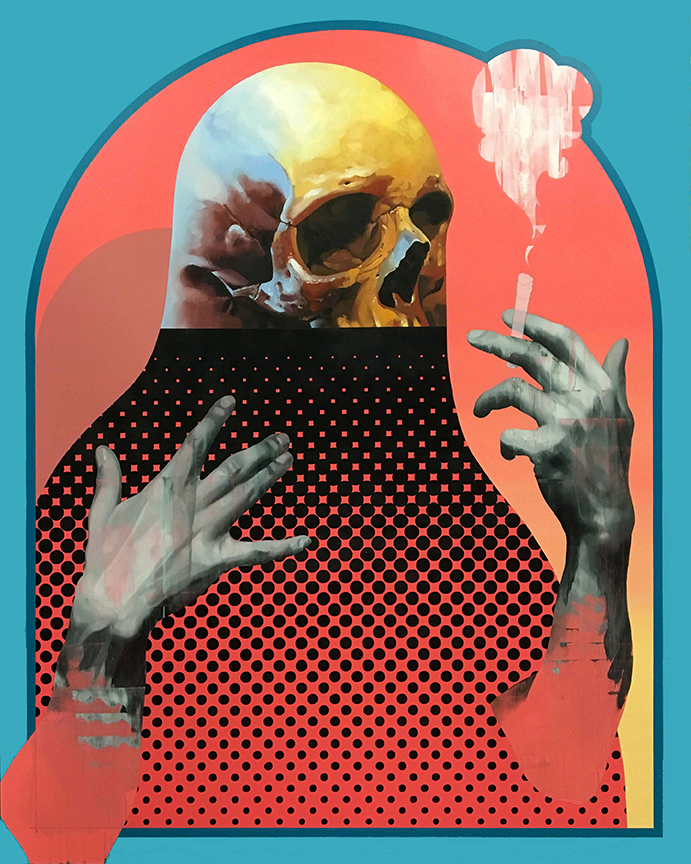 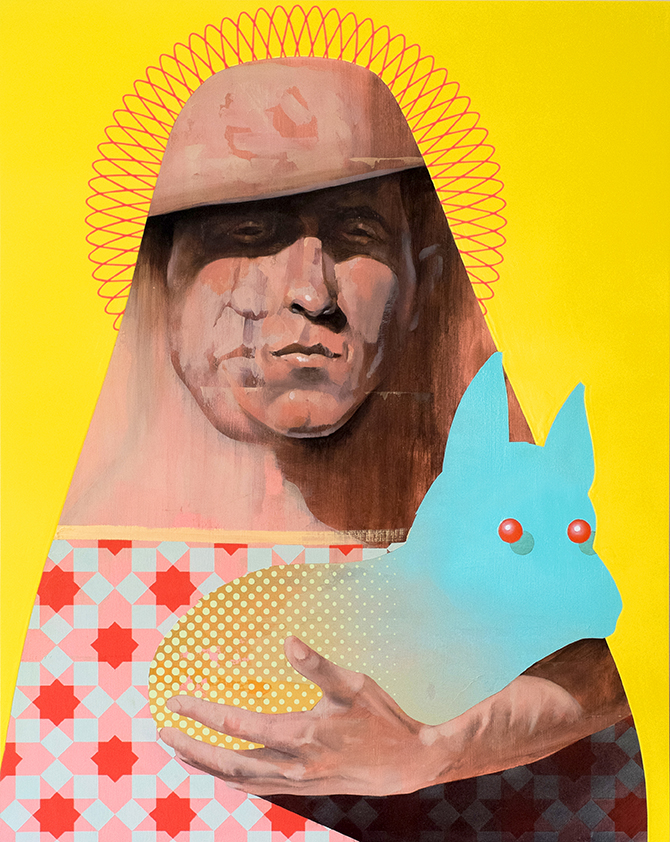 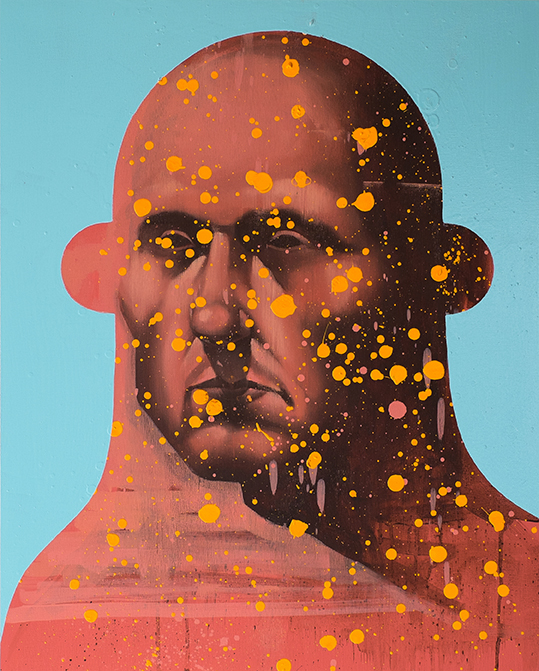 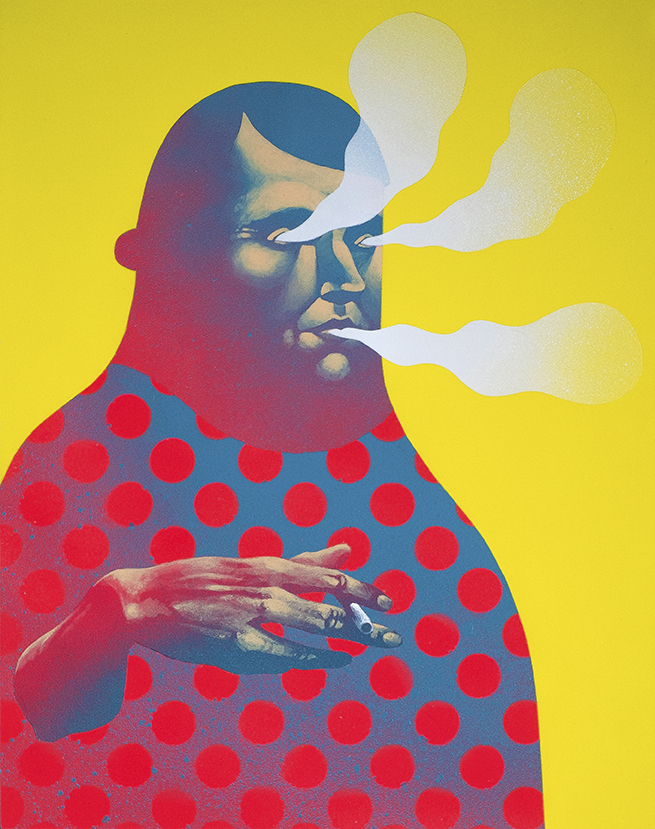 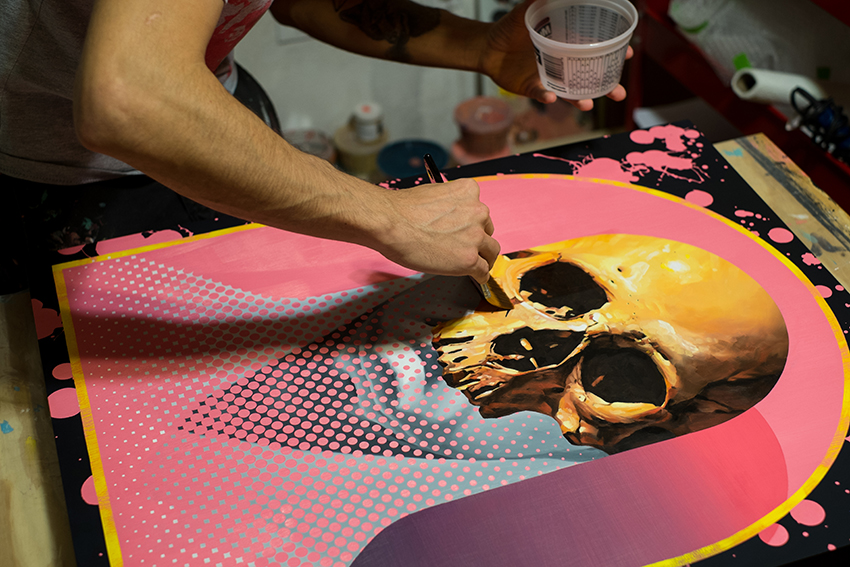 Dissecting the ‘maze’ with Michael Reeder.

Centered on portraiture, Michael Reeder’s current body of work seeks to make a direct connection with the audience. This connection encourages viewers to bring their own perceptions, imagination, and vision to light alongside his. Michael avoids narrowing his conceptual focus in order to allow content to be found and seen for the first time. Although he is technically orchestrating the process, he is doing his best to remain removed just enough to let the work veer off-course and locate its own destiny. Throughout his work, realism is mixed with flat graphic space, and themes or motifs of identity, ambiguity, and ego are loosely implied. The convergence of infinite space and the figure highlights the realm of contemplation located between the conscious and the subconscious mind.

AMM: Hi Michael, could you give us a glimpse into your background and share the vision behind the scenes of your art?

MR: Hi there! Thank you for including me in the launch issue of ArtMaze Mag! Well, I’m originally from Dallas, TX. As early as I can remember I’ve always had a strong connection to art and the general aspect of creating stuff. I attended art schooling as far back as middle school as well as an Arts Magnet High School which then led right into a BFA in Fine Art at the School of Visual Arts in NYC. While in High School I became consumed in graffiti and hip-hop culture which became a large part of my visual voice. Later I would work in illustration and graphic art, and gain knowledge and experience in abstract modernism. My current paintings are merely the culmination and product of many years of participating in and studying a multitude of different styles and cultures in painting. I’ve managed to find a happy middle ground and marry these different styles to form my own.

AMM: You mentioned that your studio is currently transitioning from New Mexico to LA. How easy or hard is it for you to relocate and get used to a new place to work and live? Do you think it affects your art in any way? What do you hope to gain from moving to LA?

MR: Yes, I am smack dead in the middle of moving to LA and it has been far from easy. Unlike most jobs being an artist requires that we actually construct and create the object we show and sell. This means that we need our studio space up and running in order to be bringing in any kind of income outside of prints etc. So, the moment I shipped out my work to CASS Contemporary and Thinkspace for Art Basel week in Miami I started boxing up the studio and therefore all production was put on hold. It ended up taking me a solid 4 weeks to pack everything up, drive it all to LA, put it in storage, locate a new studio space, move everything in and halfway set it up so I can get to cooking on new works for a trio show at Athen B. Gallery this February. Setting up a studio takes time and I’ve learned not to force it. You have to just get started working and let the space tell you how it needs to be laid out in order to function at an optimal level. It’s an extension of the artist and therefore needs to be molded to fit. One of the random things I definitely require in my studio is enough space to pace back and forth. Whenever I manage to hit a stride or connect with the muse I get hyped up and need to pace for a minute or two. As far as moving to LA specifically I’m hoping to surround myself with more creative visual artists and take part in more local projects. I’ve been showing quite a bit on the west coast recently so it’ll certainly cut down on shipping costs as well.

AMM: Contemporary portraiture and identity are two of the most fascinating and main focuses in your work. Would you say that your work is autobiographical? Does your art in any way reveal your personal identity?

MR: When I first started the portrait series I wanted to focus more on how I painted the portrait and what mediums and techniques to use rather than concerning myself with whom I was painting. So I decided to paint the same three or so references over and over. Essentially I was trying to give room for the content and focus to be more about the surface and paint rather than subject matter. Through that process I began to realize and embrace the natural diversity that was being developed through painting the same face. These works are somewhat autobiographical in a sense but it’s not necessarily intentional. I don’t think there’s any way I could escape elects being about me or even from me. For instance every arm or hand painted this series is of my own. I don’t know that any of these works reveal my personal identity other than that most of my work focuses around the internal and external self and the way they exist in this world as one.

AMM: Looking at your early work, it delivers the idea of contemporary landscape/space and identity. Could you elaborate on how you were developing your philosophical ideas of identity and ambiguity, and how did you transition to working with portraiture?

MR: For a while my work was devoid of the figure and was centered around environments that showed the presence of a person yet no figure was present in the image. These landscapes or environments were comprised of different parts that seemingly aren’t meant to be together but in this space I brought them together. This is where I began pushing the space and utilizing opposing perspectives and objects. At a certain point I felt this direction had plateaued a bit and I decided to go on somewhat of a hiatus in an attempt to reflect on the direction of my work. This reflection highlighted my desire to reinvestigate the portrait and figure and utilize more stylized, urban aesthetics. I’m more than pleased with what I’ve been able to create since focusing on the portrait but I can already see where the path is starting to come full circle again. It’s only natural though and I fully welcome it.

AMM: Colorful graphic surfaces with elements of pattern and realistically drawn faces and skulls are the main ‘ingredients’ in your paintings. Could you tell us more about how your painting style developed?

MR: As I began to establish the concept of identity I soon realized that the element of assemblage was right in line with how we as individuals are built from a multitude of different backgrounds, upbringings and experiences. So Instead of trying to focus on one style or genre of painting I decided to embrace as many as I could. This in turn helped push the collage look and feel. I try to merge and marry these otherwise contradictory elements and I achieve a sense of harmony and essentially build a person or figure that only exists in the painting.

AMM: An “anonymous” smoking figure with (or without) an object held in its hands is featured prominently in your work. Could you share any thoughts about the symbolism in your art?

MR: Well, as with most of the symbology in my work it’s not necessarily intended to be specifically decoded as much as it’s meant to create a platform for the viewer to attach themselves or their experiences to. My ultimate desire is to create an image that gives the viewer an ability to personalize the work. This gives room for the work to be more than I could ever hope it could be.

AMM: Your works are full of color yet they bring a sense of ‘darkness’ and mystery. How do you hope viewers will respond to them and what is the most important thing they should take away?

MR: One of the consistent themes in my work is the concept of contemplation. I’ve always found it to be an intriguing thing that we humans naturally do daily. Sitting or standing in one spot pondering over different things or observing or gazing. So I feel that this kind of imagery combined with the occasional skull and poppy ice cream color palette essentially creates what you’re describing. Oh, and most of the figures are devoid of eyes, haha! The most important thing I could hope for them to take away from my work is that we are all one in the same. We all go through this life battling similar challenges but in different ways, but at the end of the day we are all just flesh and bone. We get up in the morning and put on our external mask and face the world.

MR: Any spot with a good sightline is ideal. The mural I painted for the Forest For The Trees mural festival in downtown Portland is in an amazing location. It’s painted on the upper four stories of a six story building with awesome view points. It’s been photographed literally hundreds of times. As far as what’s more important, I think that for murals location is extremely important but what’s the point in having a prime spot if you don’t properly utilize the opportunity.

AMM: Can you share some words of wisdom/inspiration with emerging artists who are seeking to develop their contemporary approach in their work as strongly as you did?

MR: This is certainly a topic that’s tough to convey completely because there are so many variables and factors involved and many of which you have zero control over. So I guess number one would be to work at maintaining a constant sense of awareness with your work and how it’s reached its current state. I don’t know how many times I’ve made significant changes in the direction of my work in search of finding the most honest path. As far as developing a contemporary approach I think it’s imperative to keep trying to bring your work into the current. You can learn how to paint from studying the old masters but in my opinion it’s your duty to bring that into the 21st century. I remember a professor I had at SVA, Jack Witten is his name, said one day while speaking to the class, that he feels sorry for you if all you’re doing is painting oil or acrylic on canvas. So, don’t be afraid to experiment with new mediums and medium combinations. Have fun with it. Don’t sit around and wait for the big idea to come to you. Get in there and find it.

AMM: If there was one artist or film/book character that you could hang out with for a day, who would that be?

MR: Damn…. if I had to pick one I’d go with hanging out with Philip Guston for a day. That would be rad. The cigarettes that I paint in my work are meant as a nod to him and his work.

AMM: Describe yourself in three words.