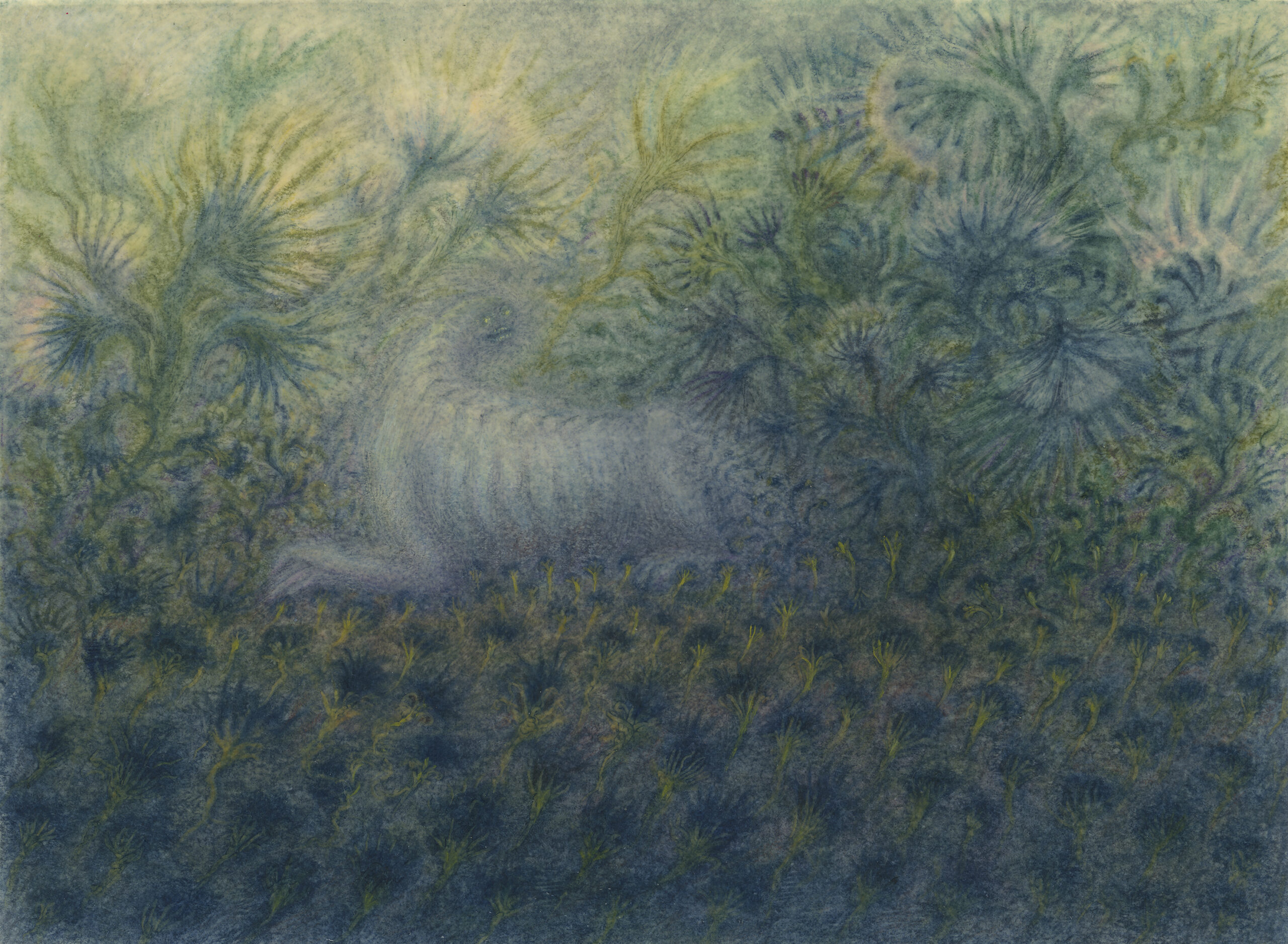 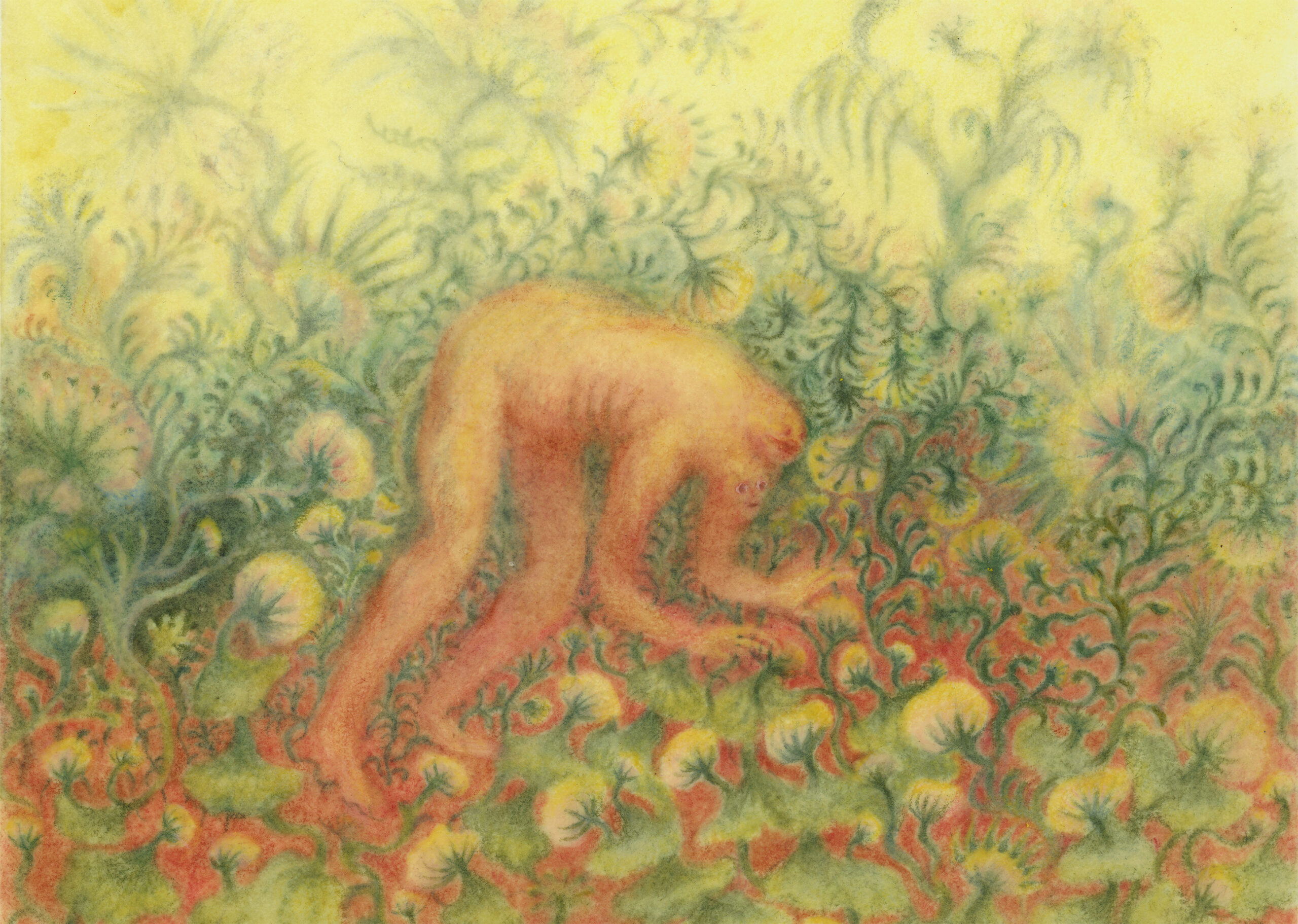 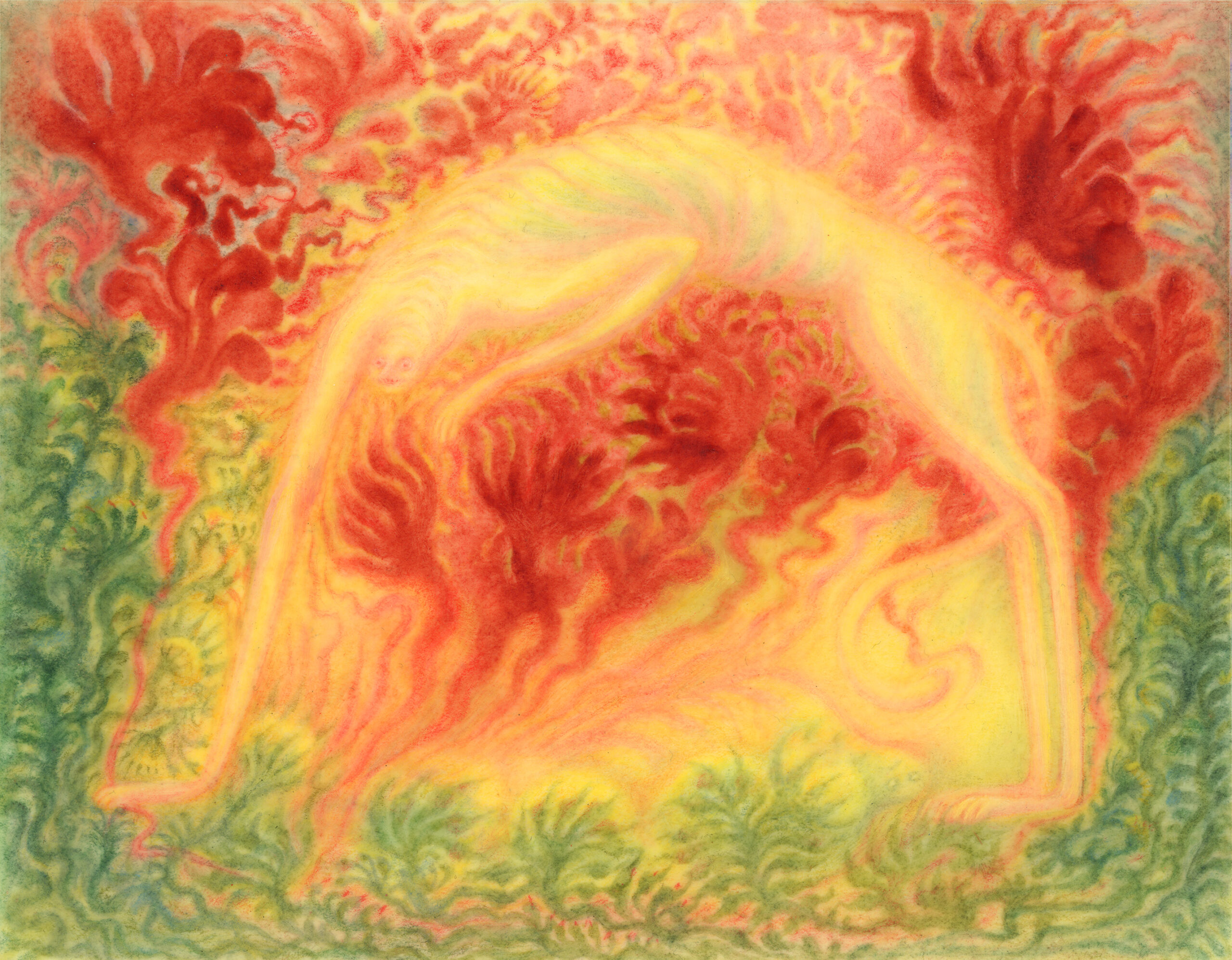 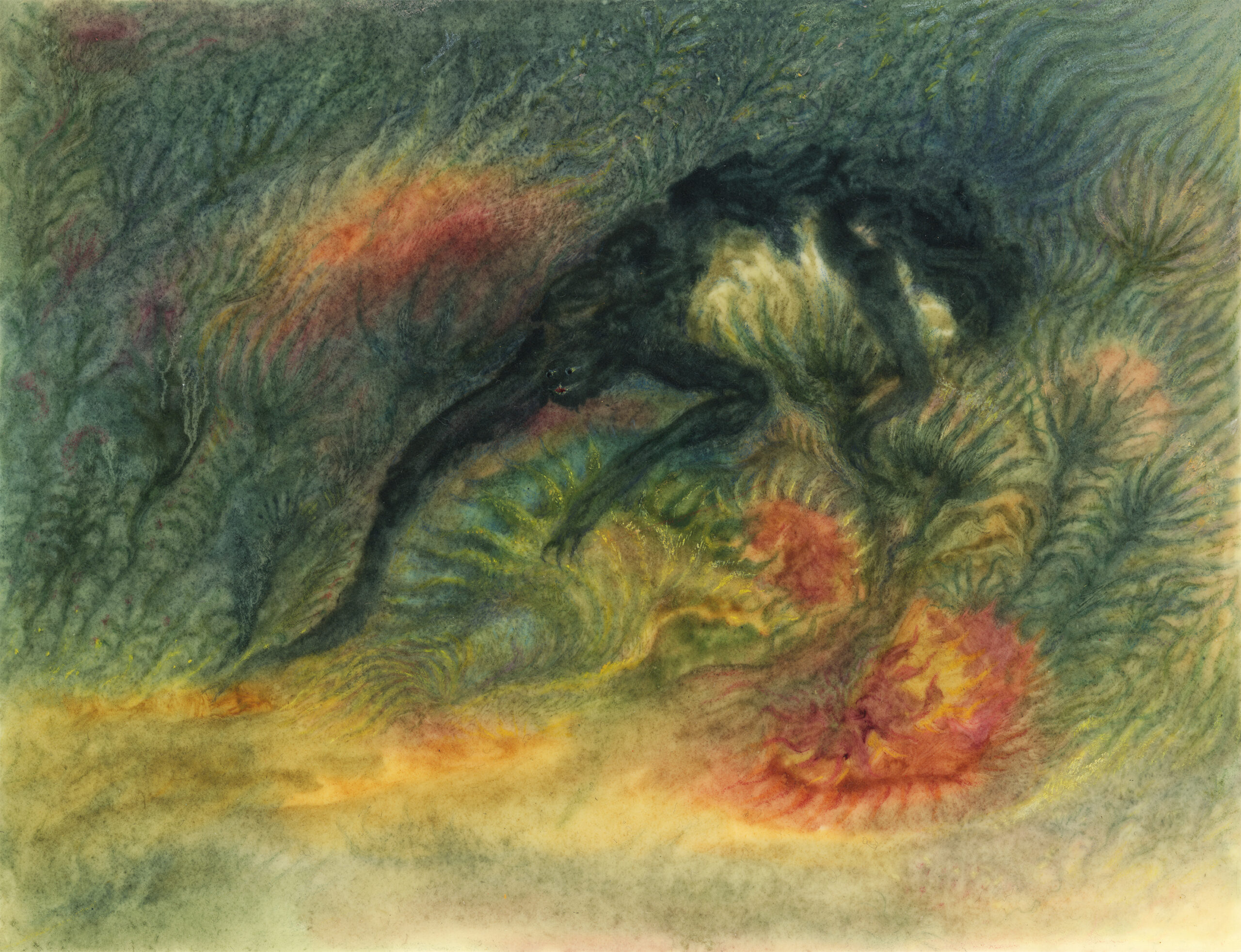 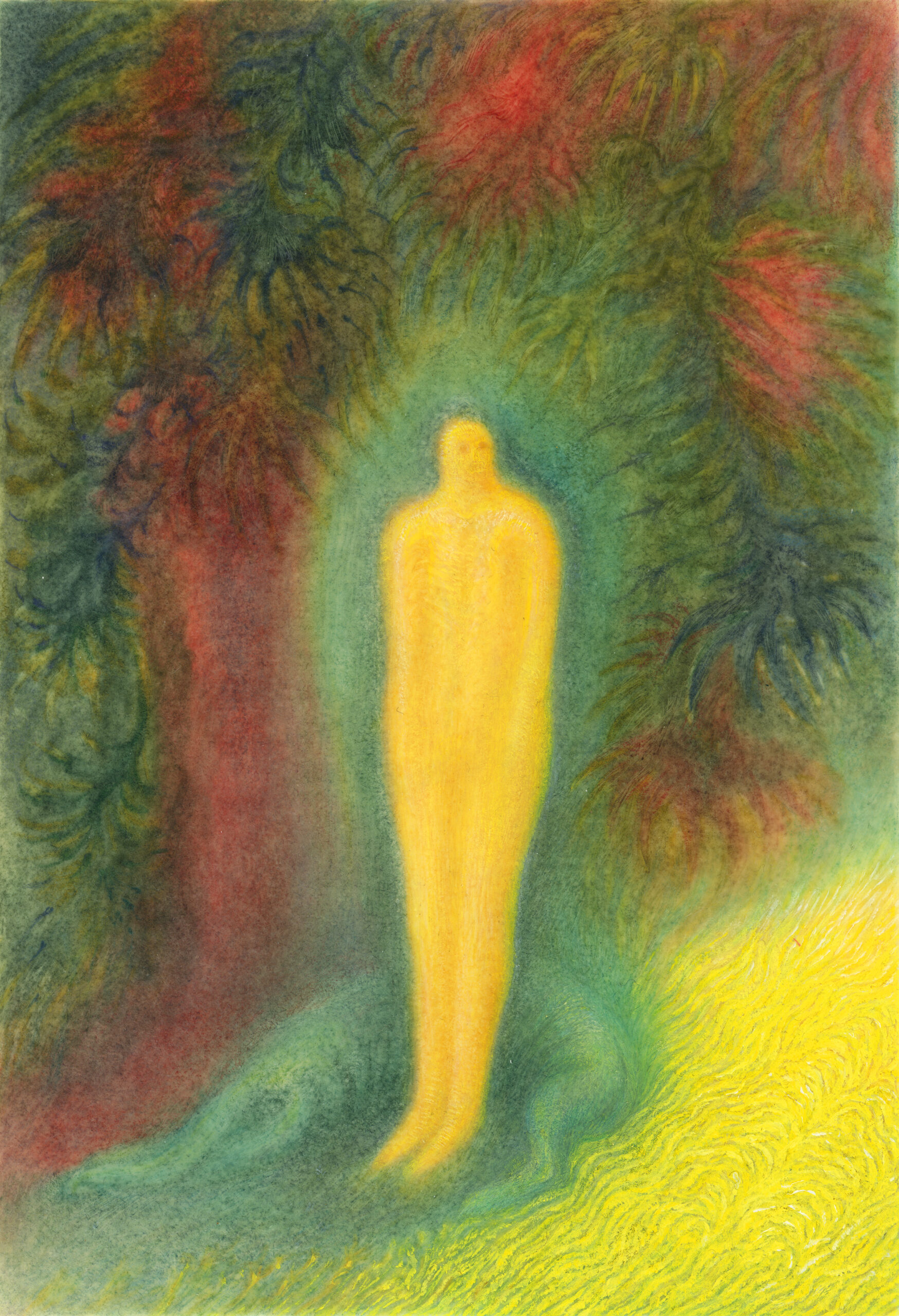 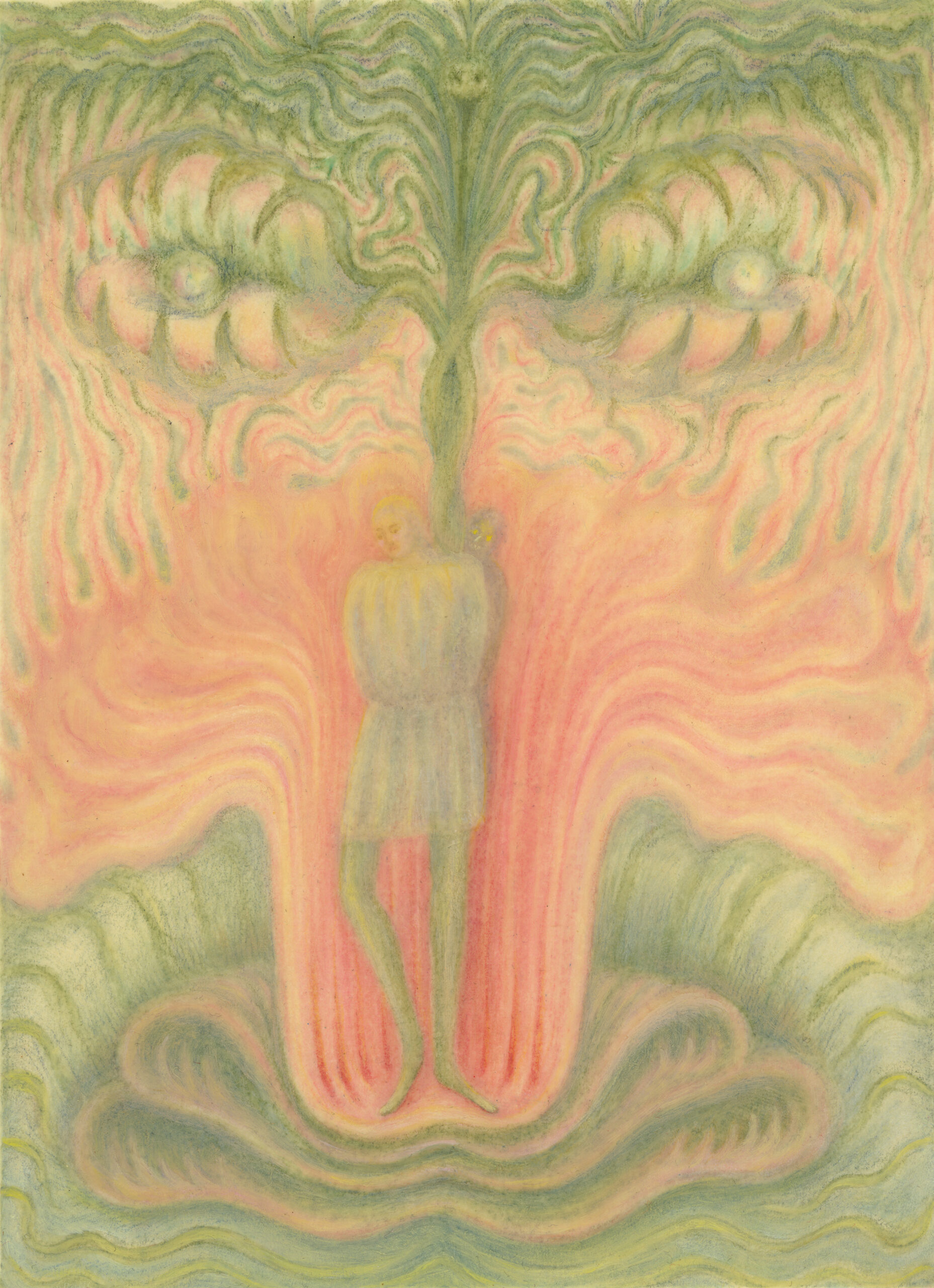 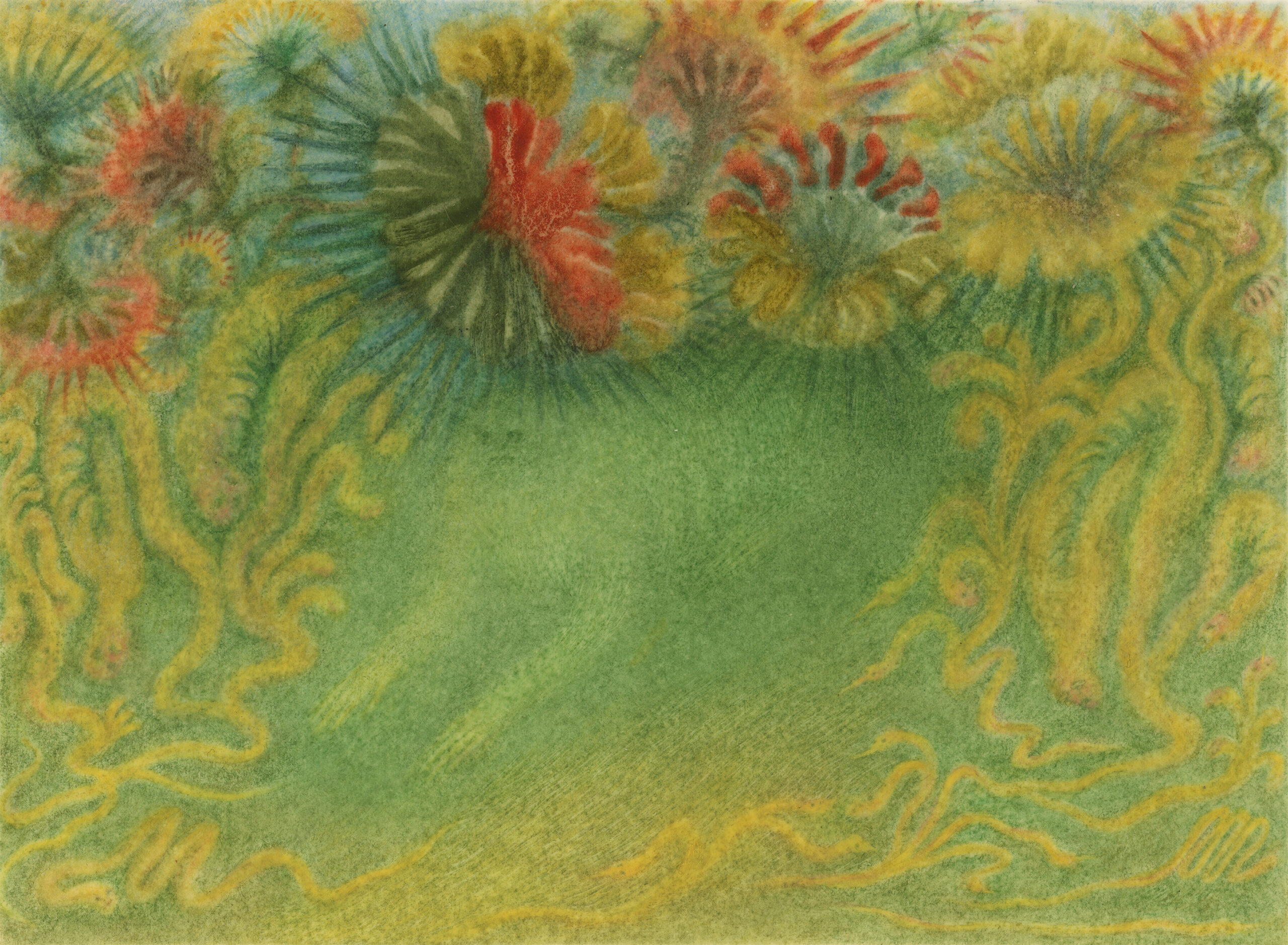 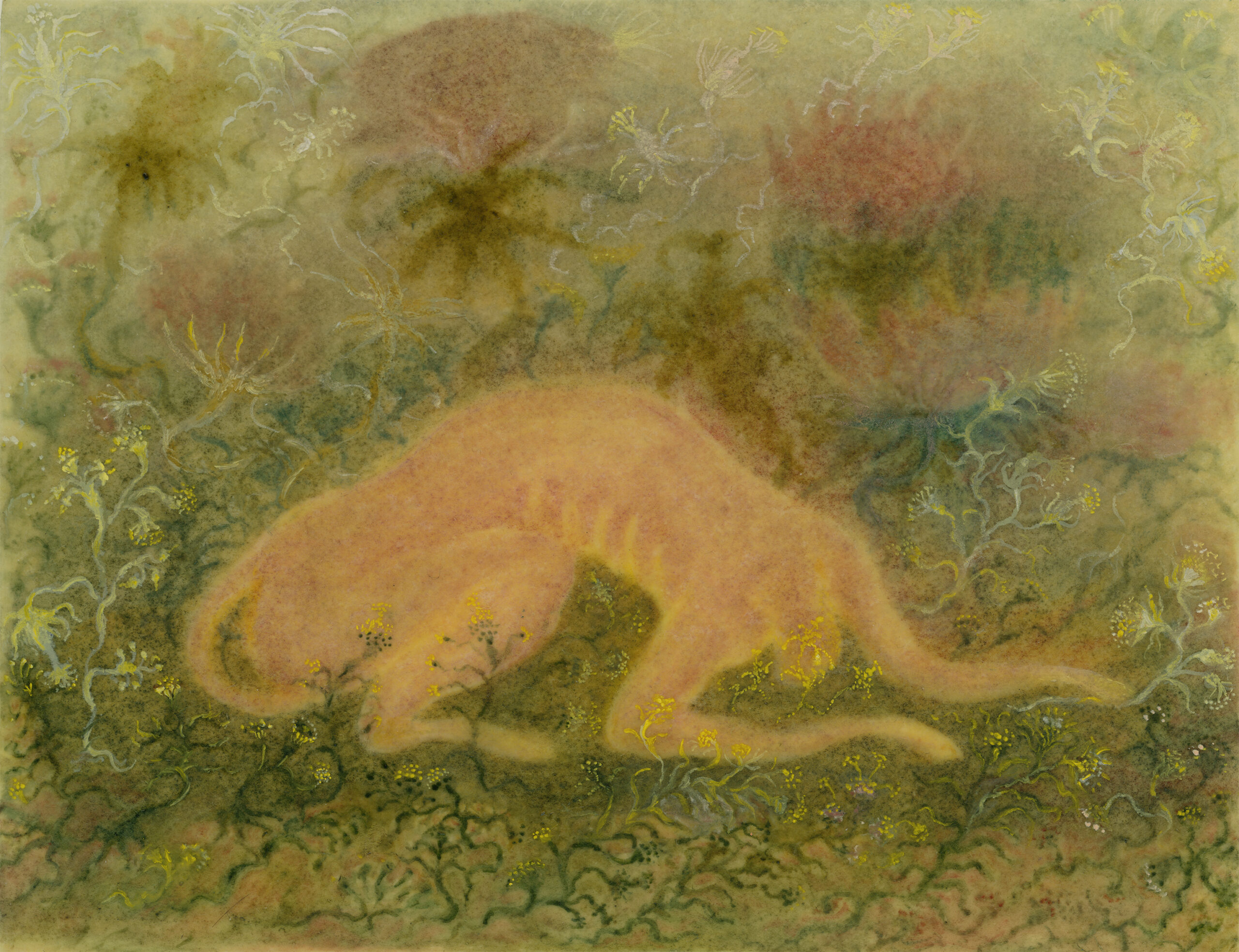 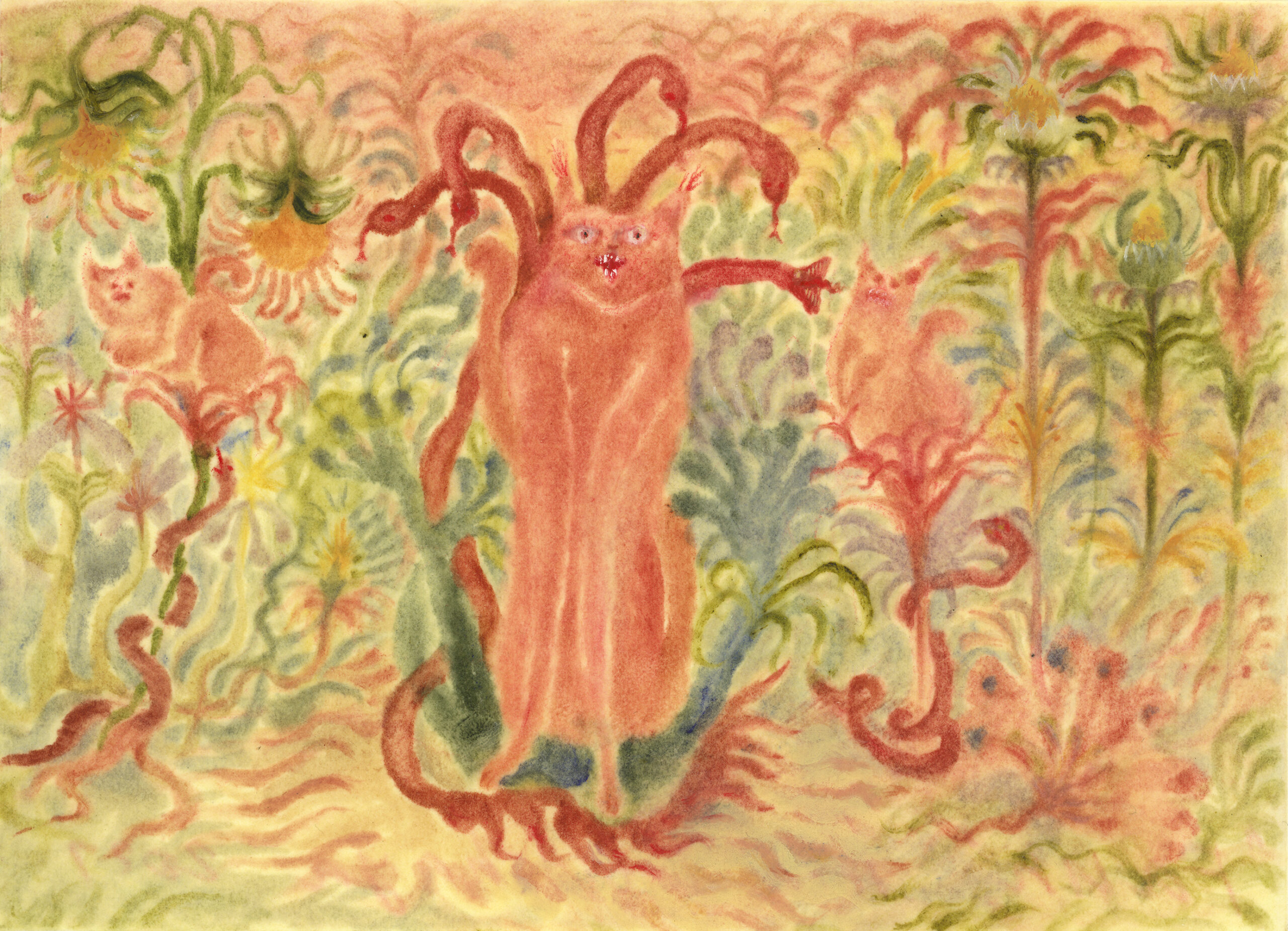 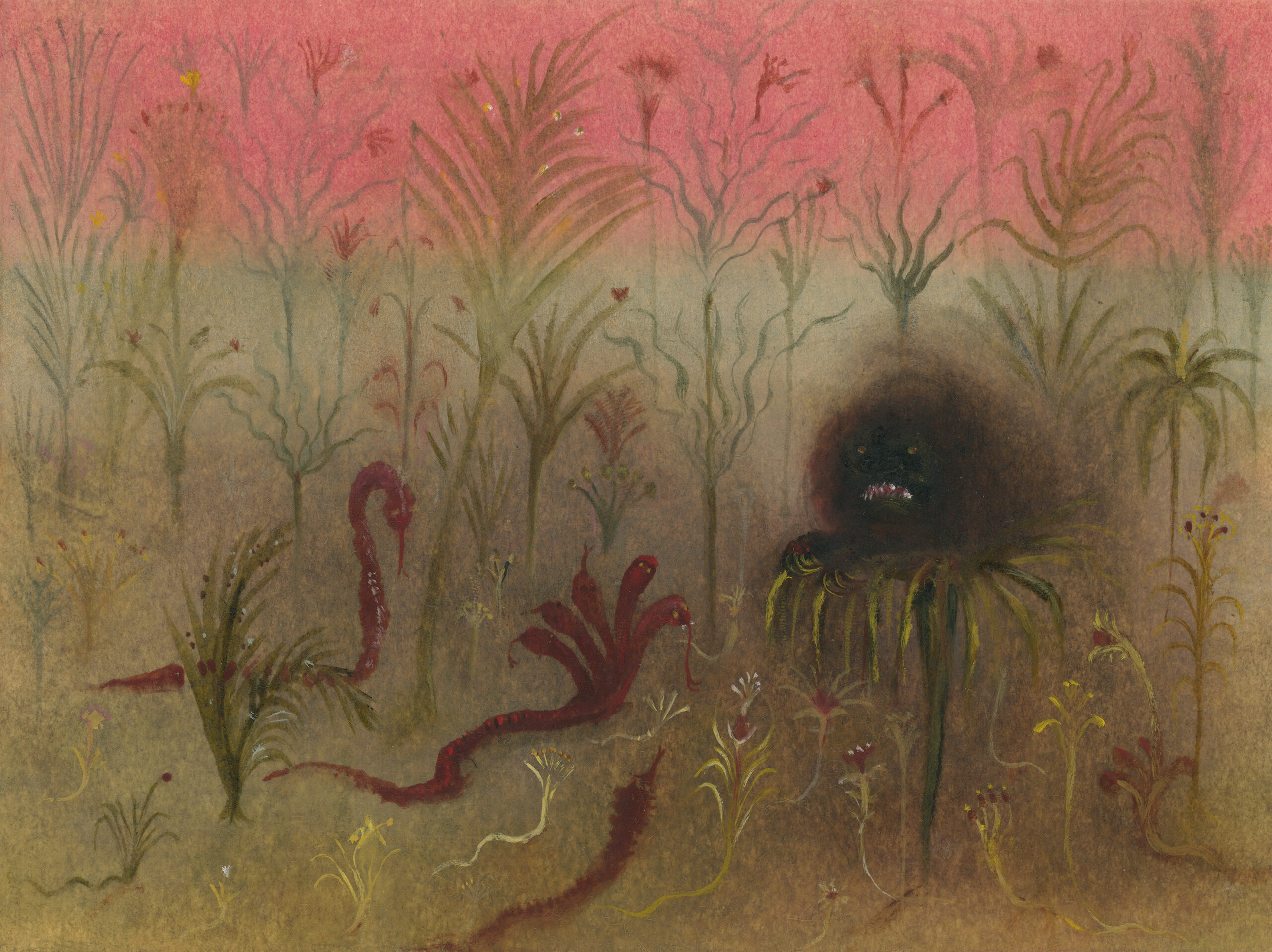 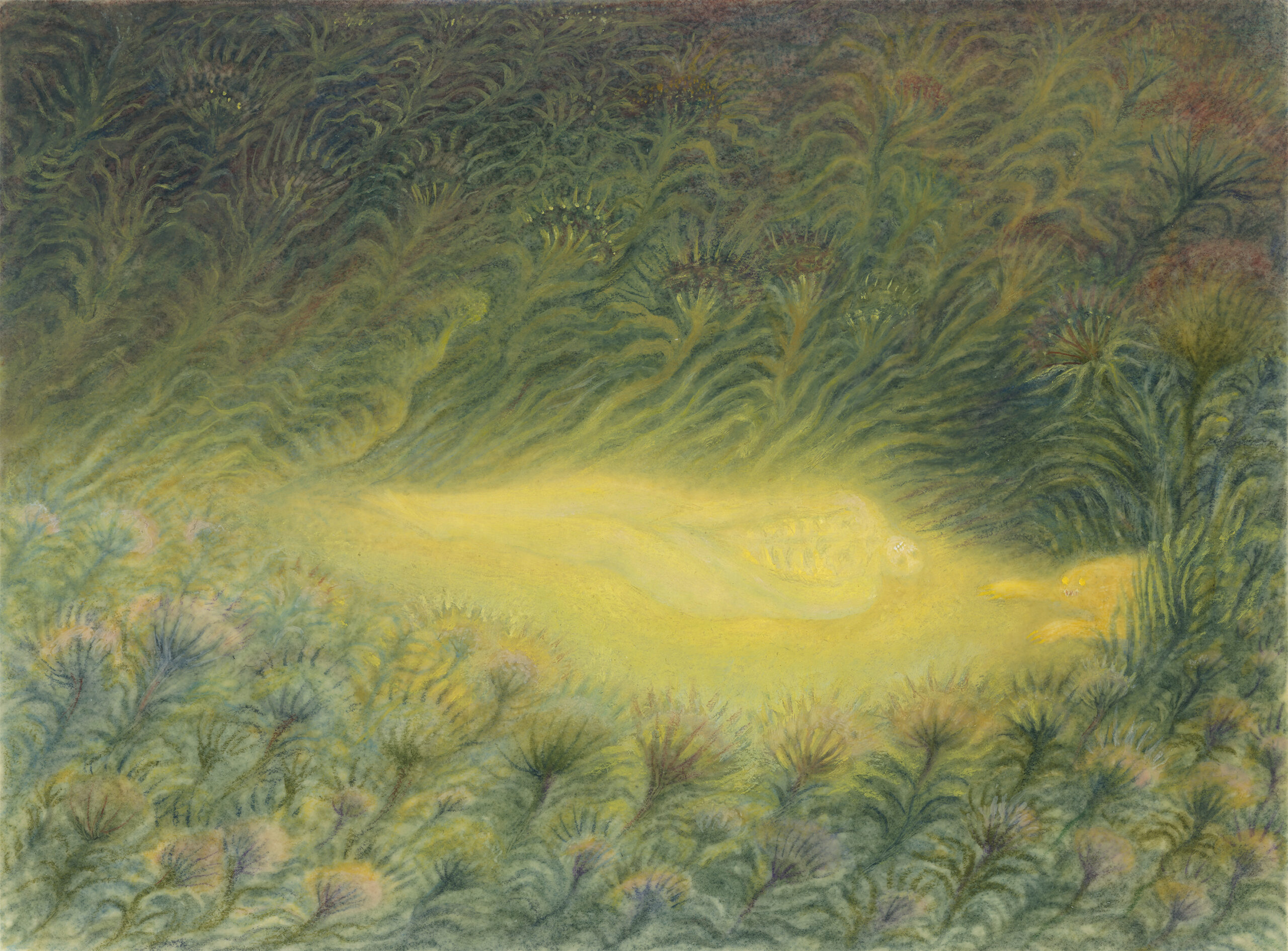 Since Lera moved on from her design and illustration work in favour of retreating to the countryside and developing her art, her method and medium have shifted away from a monochromatic, line-based approach towards rich, tapestry-like compositions. Lera’s intuitive chromatic relations strike a counterbalance of cool, darker shades with bright hues and neon accents which offset one another to create images suffused with the otherworldly glow of the imaginary. Compositionally, the pictures are reminiscent of medieval tapestries like ‘The Lady and the Unicorn’ – the mille-fleurs tapestry series which Lera speaks of as inspirational for her own practice. Certainly, Lera’s oil and coloured pencil images emulate the textures and forms present in medieval textile tradition, by virtue of their teeming ornamental flora and fauna, their use of pattern and their interwoven threads of colour. By saturating her paper with linseed oil, Lera achieves a diffused effect which heightens the sense of defamiliarisation – the ethereal world pictured in the works exists at a remove from our own. Her process involves transcribing from the imagination rather than creating images according to direct empirical observance. This way of working leans towards the speculative and mythological – a mode that becomes manifest in the forms of fantastical creatures which provide the focal point for many of Lera’s works. Their appearance traverses the line between recognisable biologies and chimerical dream-beast. These creatures lurking in Lera’s overgrown wildernesses embody a nature that is both beautiful and threatening, the environments they inhabit both inviting and hostile. In this they imagine a world that has not been shaped or cultivated by human intervention, where thorned vines, lurid sentient flowers and carnivorous plants are left to sprawl unpruned, where humanoid primates creep naked among swamps and forests, where mammal, reptile and amphibian blend together in primeval ambiguity. 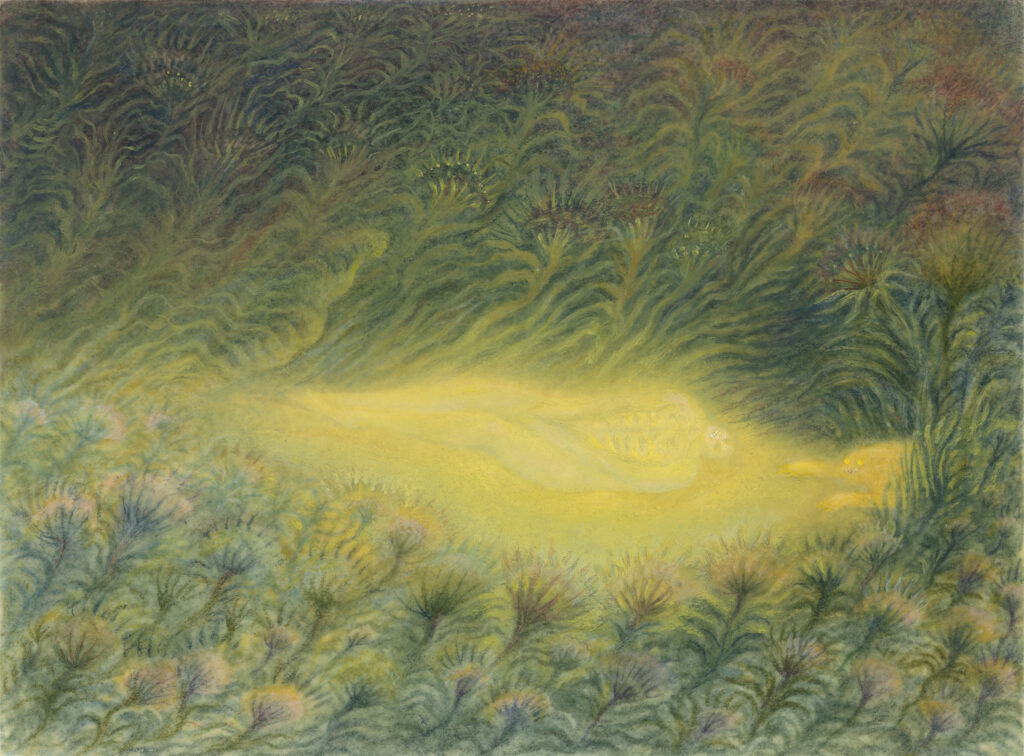 AMM: What led you to begin telling these fantasy tales through your artwork? Were imagination and creativity important to you growing up?

LD: Since my early teen years design was a big part of my life, which I never really had deep interest in, but I came to terms with that fact. I reasoned that one has to do something for a living, and I had no other ideas for myself.

Artists would raise my curiosity, I even used to envy them, but I could not imagine myself in their reality. Until eventually, I was so disillusioned with design and illustration, and even more by the prospect of working at it for years, that I got frustrated, left Warsaw (where I had been living since 2014) and came back to Belarus, where I settled in the countryside without any clue about what to do with myself.

After a few bad weeks I calmed down a little and asked my parents to bring me painting equipment. I thought that nothing was going to come from it (here great thanks to my painter friends who kept me motivated) but it actually worked out quite well.

Imagination and creativity for sure were and continue to be important. If you ask me whether I was conscious of it early on – probably no, I wasn’t. 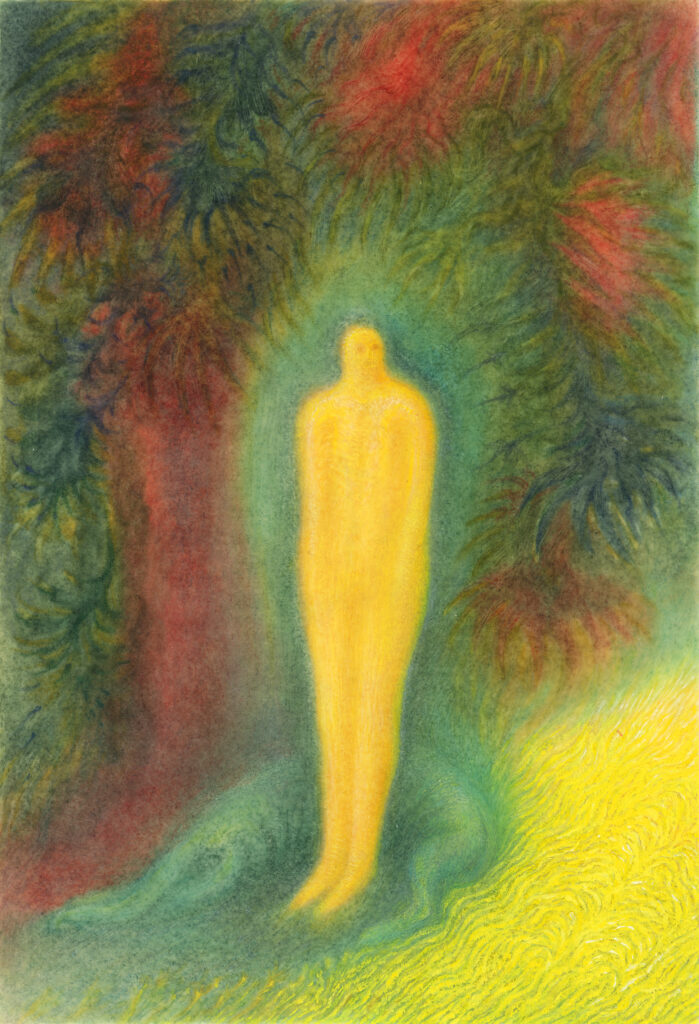 AMM: How have your practice and method evolved over time?

LD: I can see two key changes that occurred more or less simultaneously. First of all, switching from black and white pen drawings to painting with colours. Secondly, resigning from painting from nature or pictures. It was a demanding change, but it improved my imagination really effectively.

AMM: Animals have a significant place within your images. Can you expand on this preoccupation with the natural world and the animal kingdom within your work?

LD: The plasticity of plants and animals suits me, they are easy to transform. And I don’t need to see them to paint them.

AMM: Equally, many of these creatures are not recognisable as anything which exists within our world – sentient flora, two-headed beasts, uncanny humanoid figures. How do the real and the imagined overlap in your work?

LD: In my opinion, it is easier to feel and find oneself in an art that is unreal to a certain degree; it creates space for the personal experiences of the viewer. The real and the imaginary are always intuitively overlapping for me.

AMM: Do you find yourself returning to certain figures which recur and reappear across multiple works? What draws you to particular forms?

LD: I often use similar motifs for plants, flowers, animals and figures. It simply feels good to paint them. 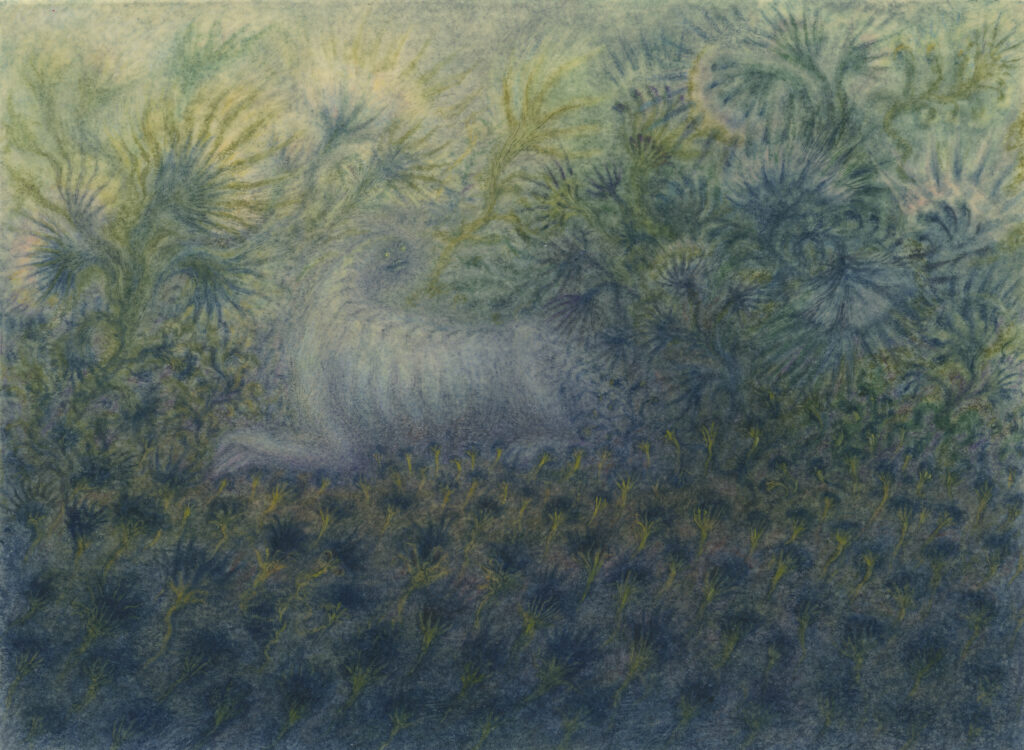 AMM: There is a hazy quality to your works which contributes to the sense of unreality we get when perceiving them. How do your images seek to distance or defamiliarise the viewer from reality?

LD: I am really happy about this question. It means that I have managed to present the state of my mind precisely enough. However I don’t like to answer the question of “how do they do this?” with words, because my only answer is the paintings themselves.

AMM: This soft shading and the beauty of the landscapes you represent is offset by underlying tones of menace in poisonous-looking flowers, carnivorous plants, and in fanged and crouching beasts. I get the feeling that many of the creatures we observe in your pictures are not tame, and might even be hostile to any human entering their environment. What does this interplay of the beautiful and the threatening say about the human experience of nature and wildness?

LD: There are not many things that are unequivocal. And I think that contradictions in painting only bring them closer to reality. You also have to be able to communicate with the monster, haha, perhaps first and foremost. 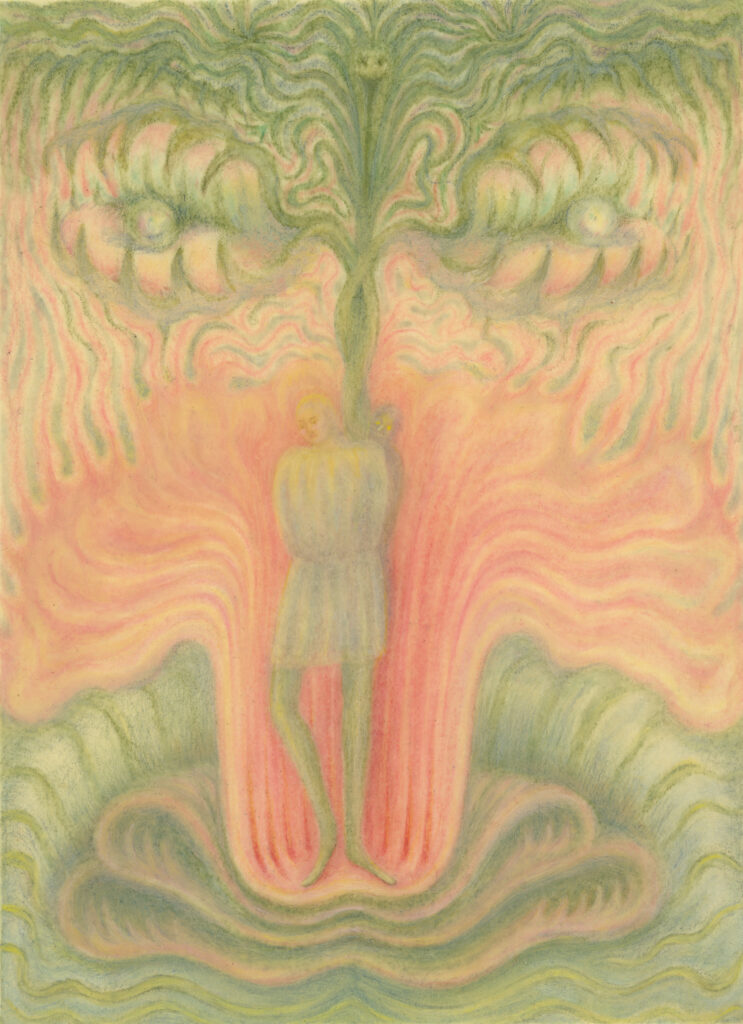 AMM: Colour seems to be an important aspect in your images, particularly in its production of an ‘aura’ or spiritual radiance around your figures. Can you tell us about this link between colour, light and atmosphere in your work?

LD: It is important in every painting. I can’t define why I paint like this and not in another way. In the process, I am always looking for ways to finalise the artwork, so that each element fits the whole, and the final effect precisely conveys a certain mood. It is, most of all, intuitive work. And often the more I theorise about which colours match what, the worse the painting turns out to be.

AMM: What materials do you prefer to use when making an artwork? How does the use of these materials resonate with the content of your images?

LD: I work with crayons and oils on a thin sketch paper, Fabriano 90g/m, soaked in linseed oil (only then can it reach the absorbency which works best for me). This way I can achieve a nice effect of softness in the contours and light. 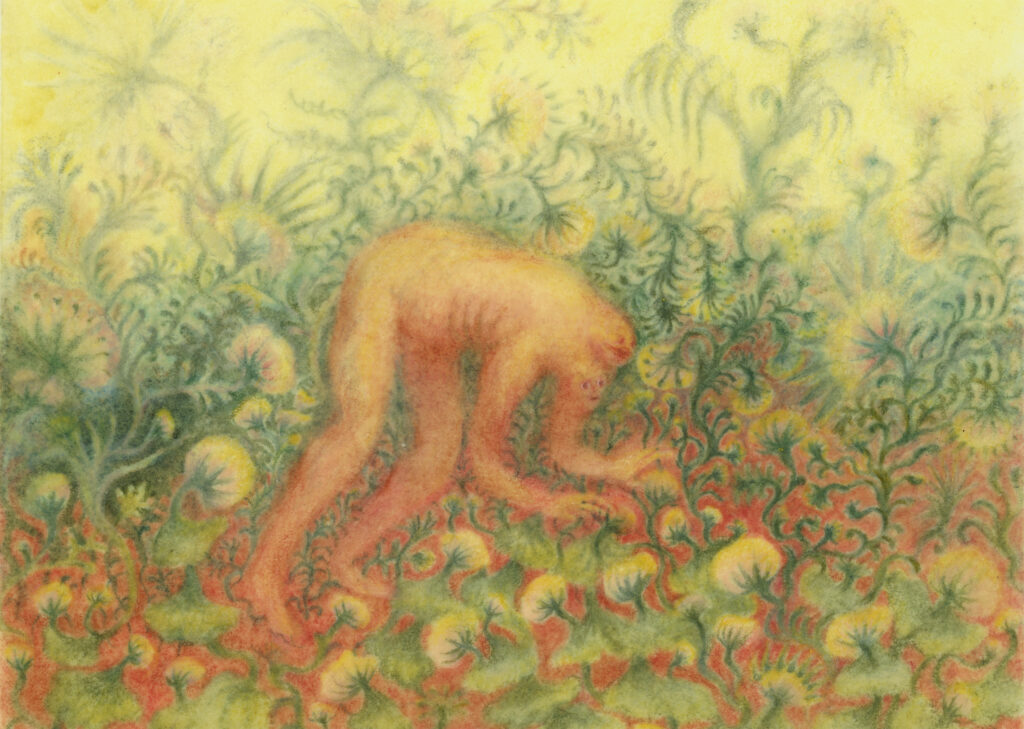 AMM: We’ve seen your pictures compared to medieval tapestries, something that is certainly present in the compositional framing of your creatures, and in the abundance of ornamental fauna with which you surround them. Where does this interest in the aesthetics of textiles stem from?

LD: A few years ago, in Paris, I had the pleasure to appreciate the ‘Lady and the Unicorn’ tapestries. Apart from the works being simply beautiful, what really caught my attention was their unique formation of light – very precise and accurate. It gives the effect of a ‘trembling light’. What’s more, thanks to the flat composition and lack of expression, the movement of the tapestries looked as if it was ‘enchanted’.

AMM: What space do you think of your work as occupying within art history? Do you find inspiration in particular artistic movements, modes or eras?

LD: I don’t think about space for me in art history. Instead of having a favourite artistic movement, I like to have a closer look at particular artists and their artworks. William Blake, Edvard Munch, Giotto, Miriam Cahn, Aleksandra Waliszewska, Maria Anto – these names come to my mind now. I was also always fond of medieval pictures. 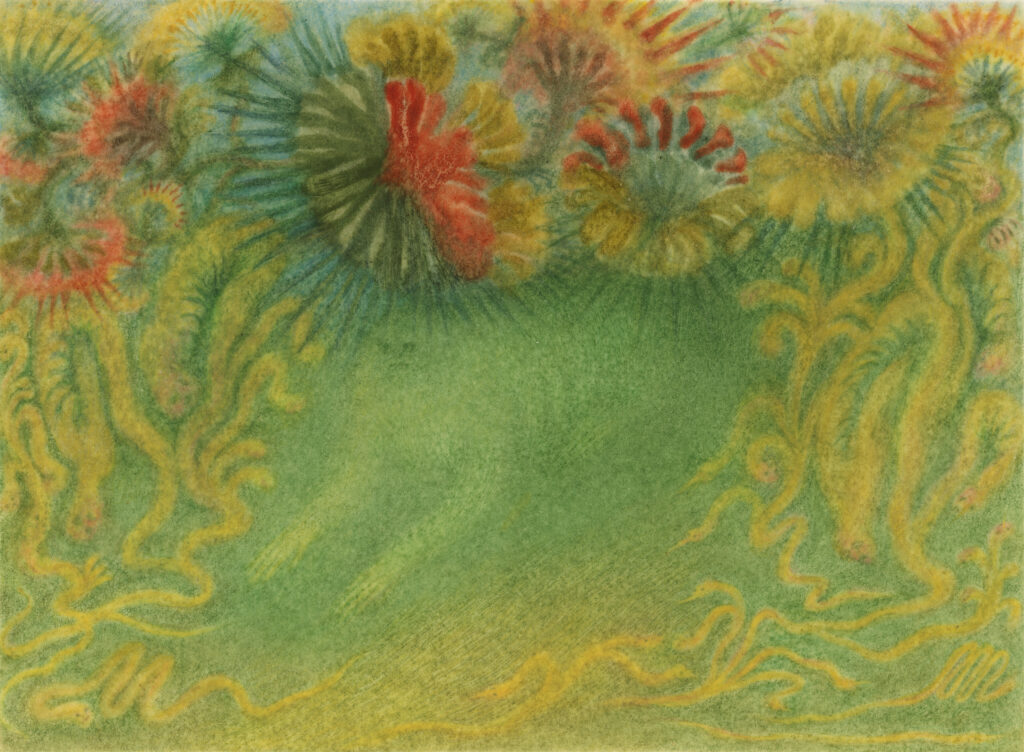 AMM: Earlier this year, you made a work which has a kinship with Rainer Maria Rilke’s poem ‘The Panther’. Does your work often draw upon literary stories, verses and narratives?

LD: I actually created the painting before coming across the poem – in the spring, in the countryside. A few months later my friend introduced me to Rilke’s poem, which strongly reminded her of my Panther. Indeed, they fit each other well. Personally, I value Rilke mostly thanks to his book Letters to a Young Poet, which I recommend to all artists.

A few years ago I used to draw with ink and pen based on the novels I read, but it hardly ever happens in my paintings now. Probably because the texts are too suggestive.

Find out more about the artist: www.instagram.com/lera.dubitskaya 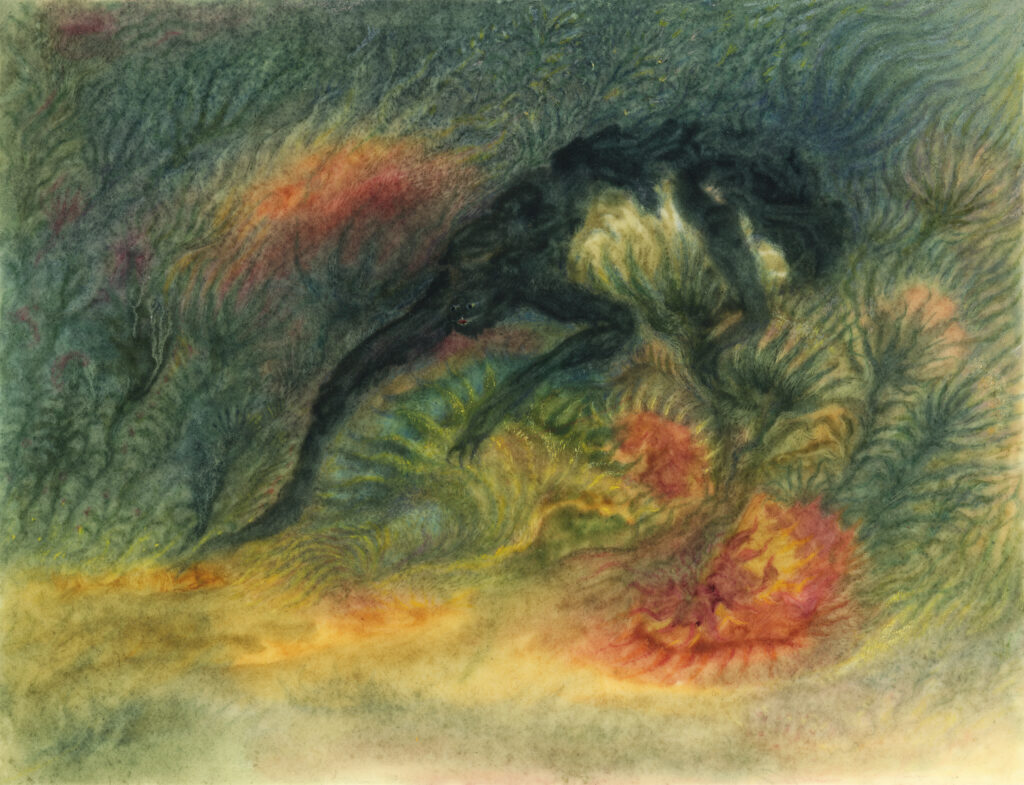