Interrogating representations of the self with Aly Helyer 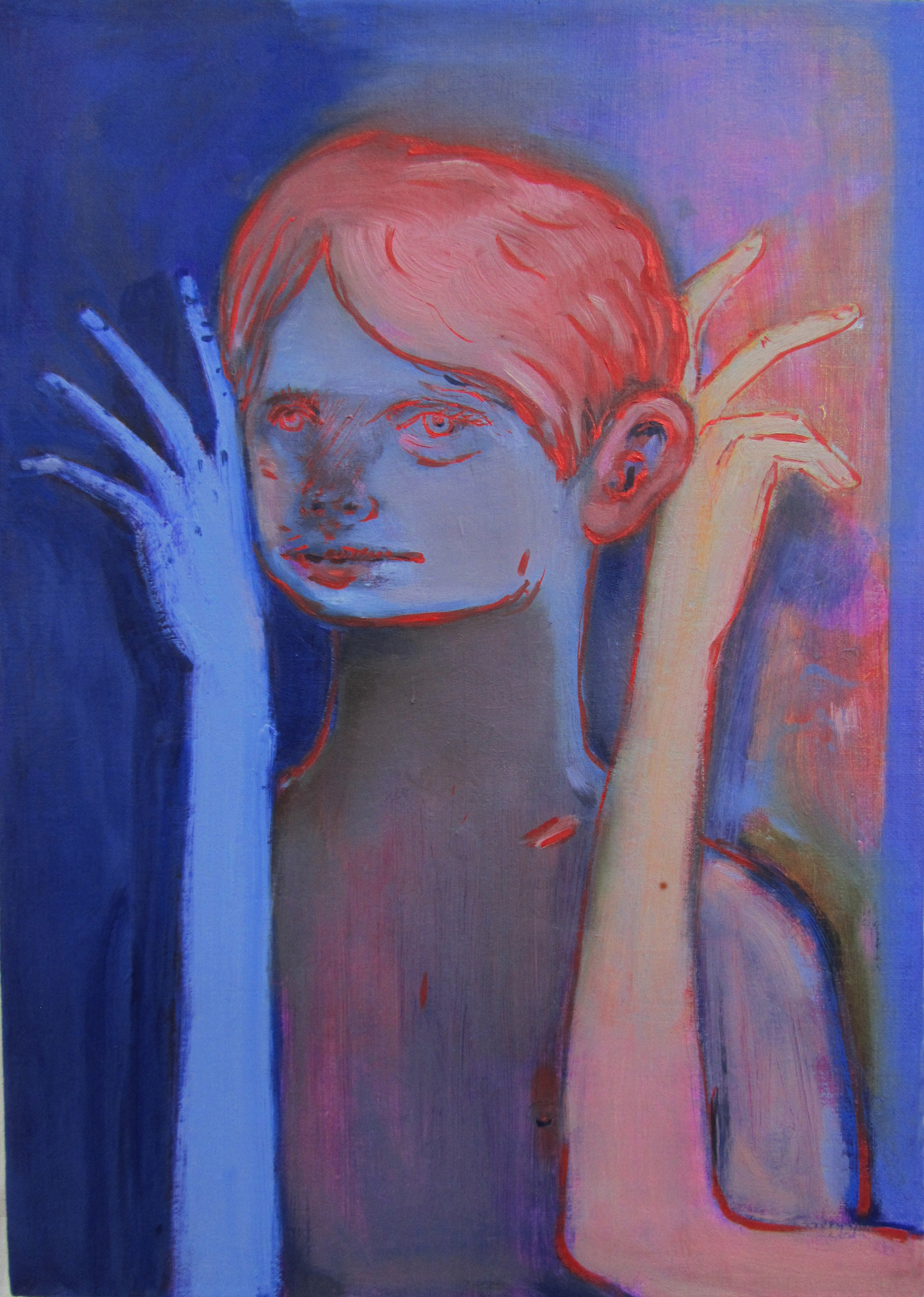 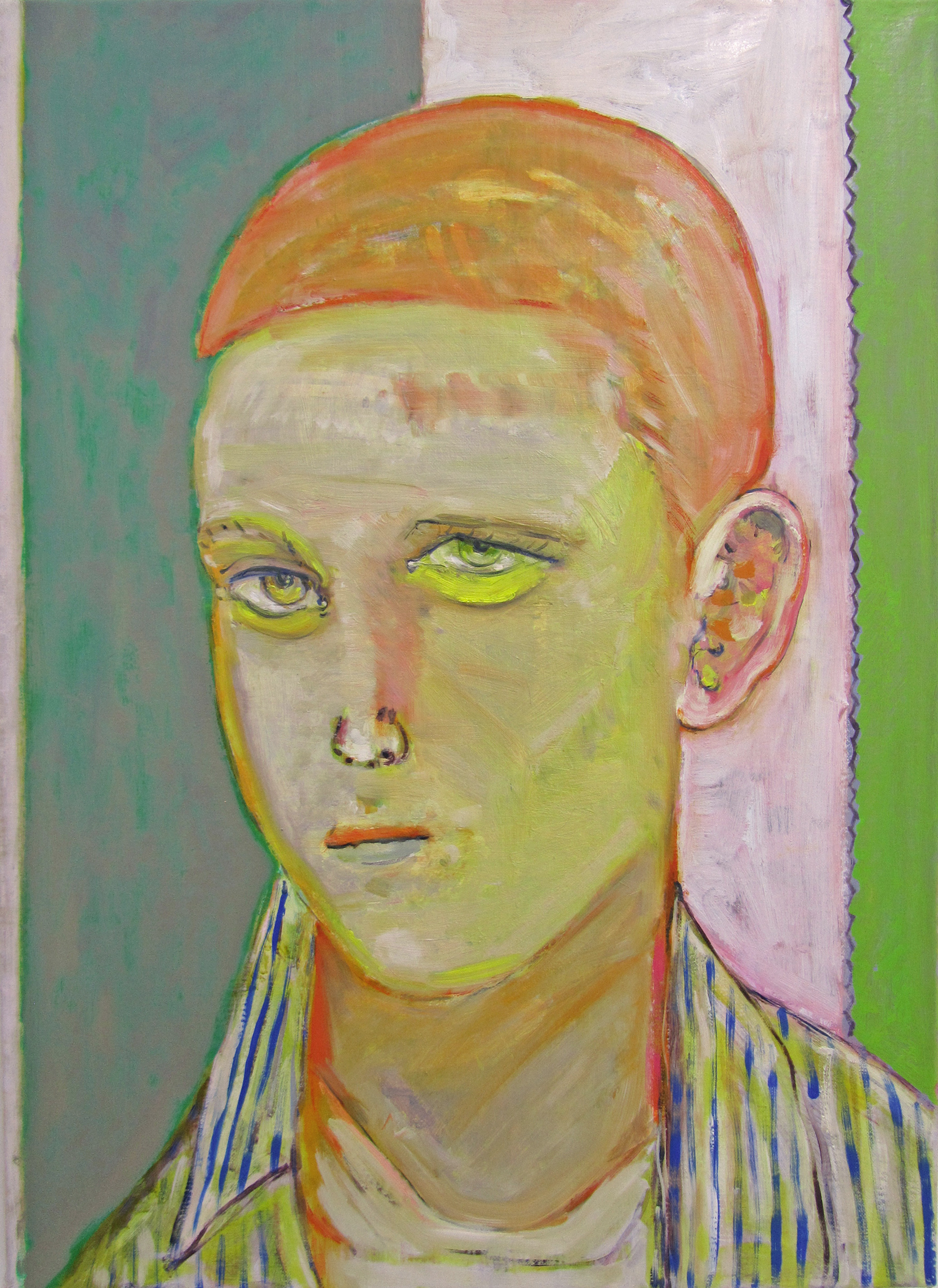 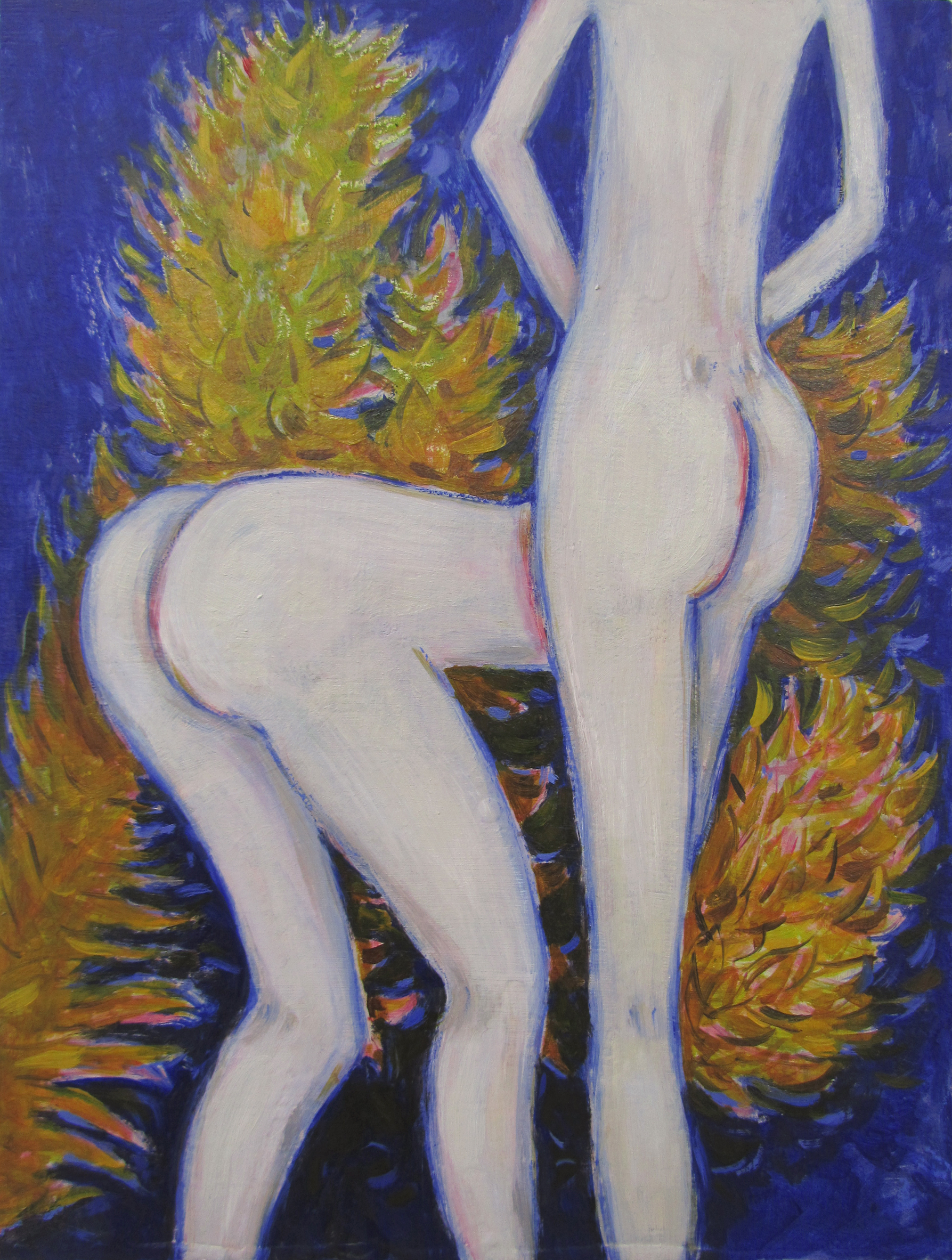 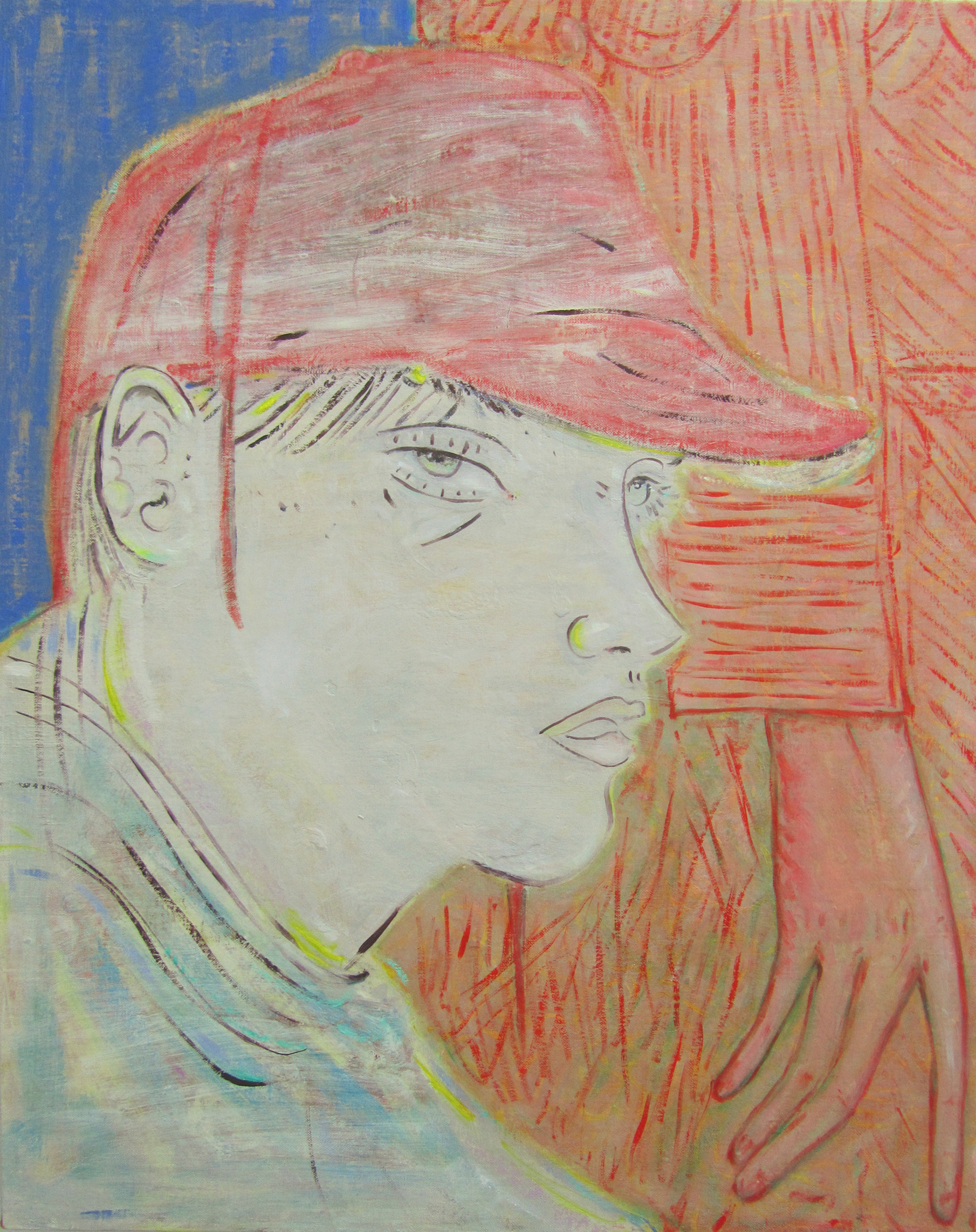 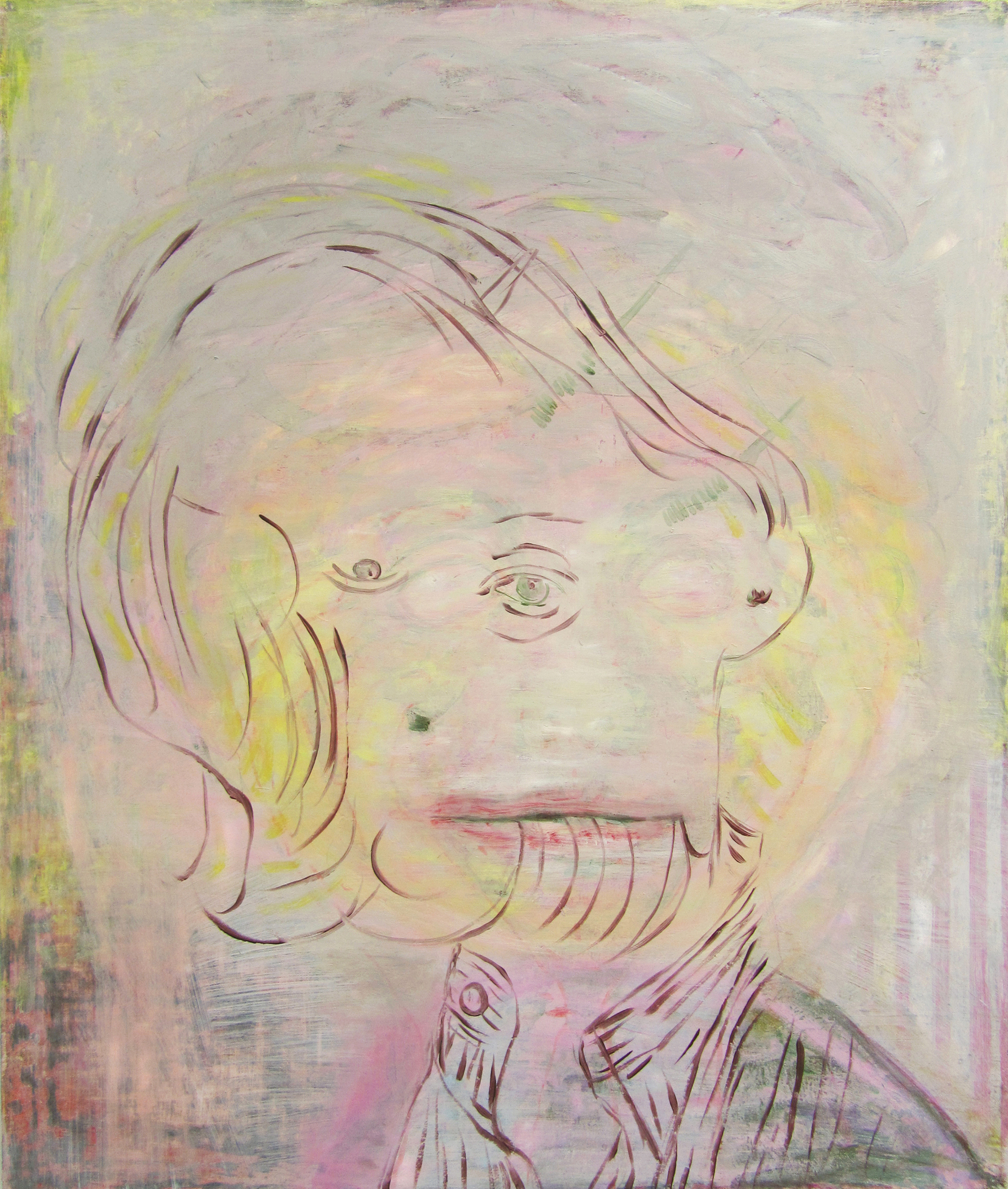 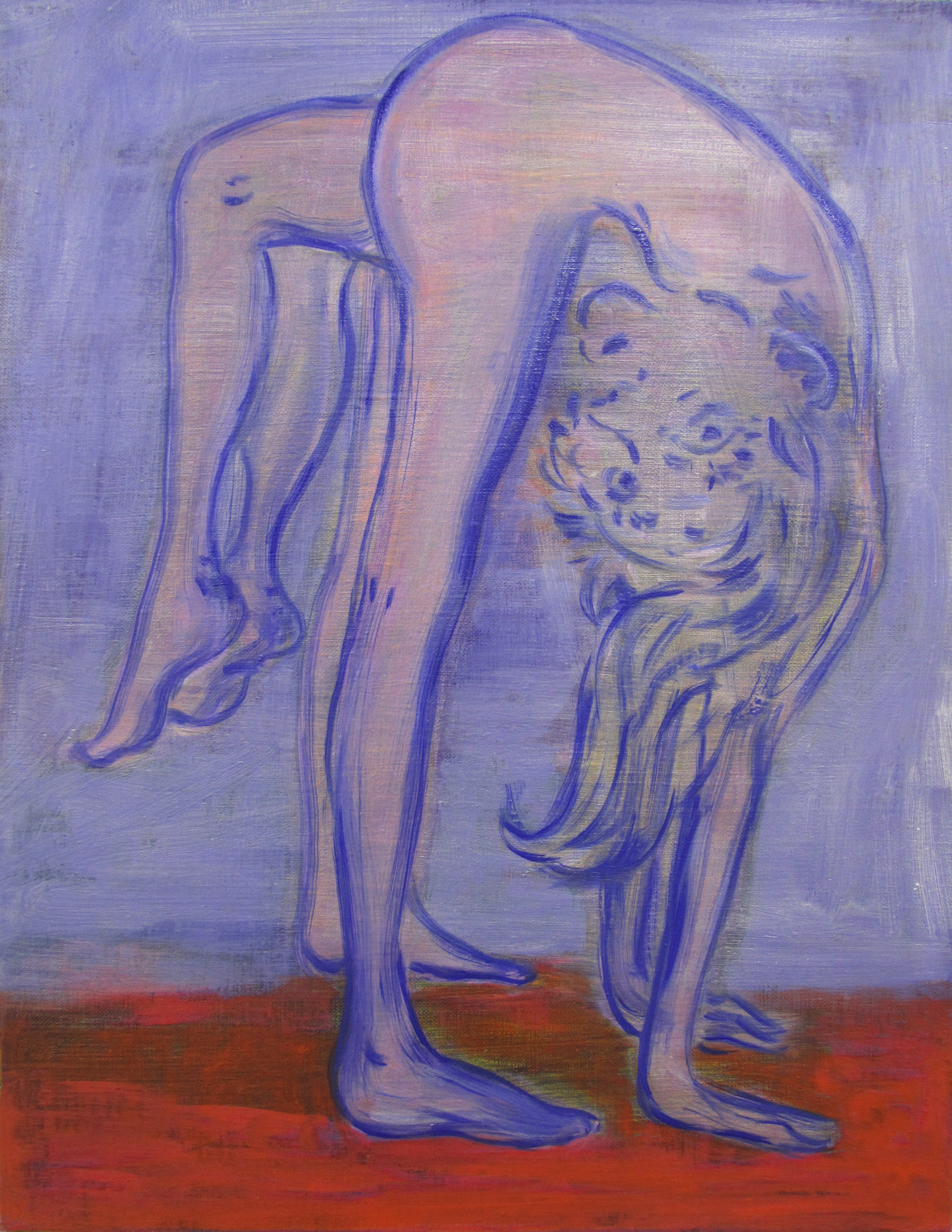 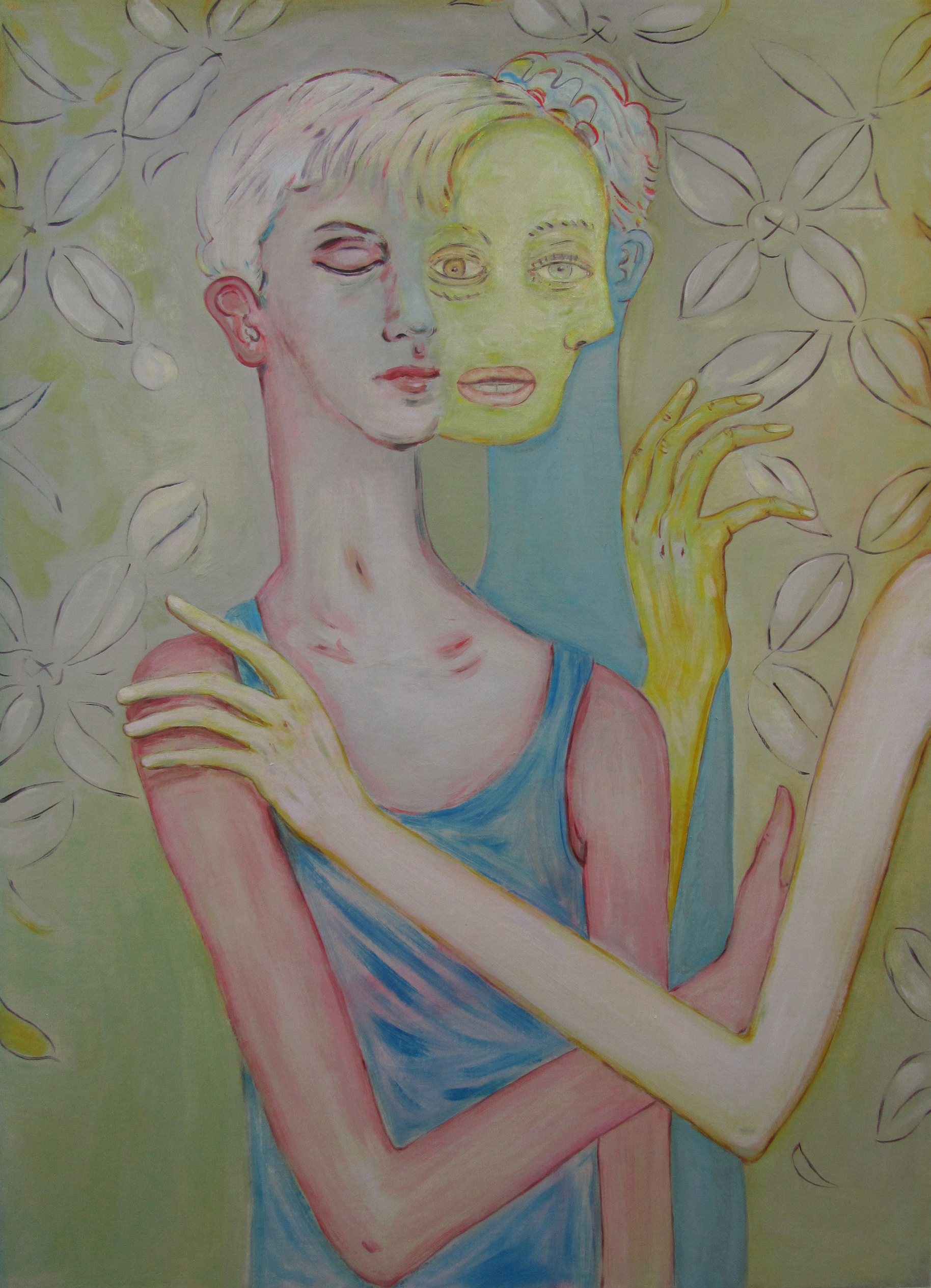 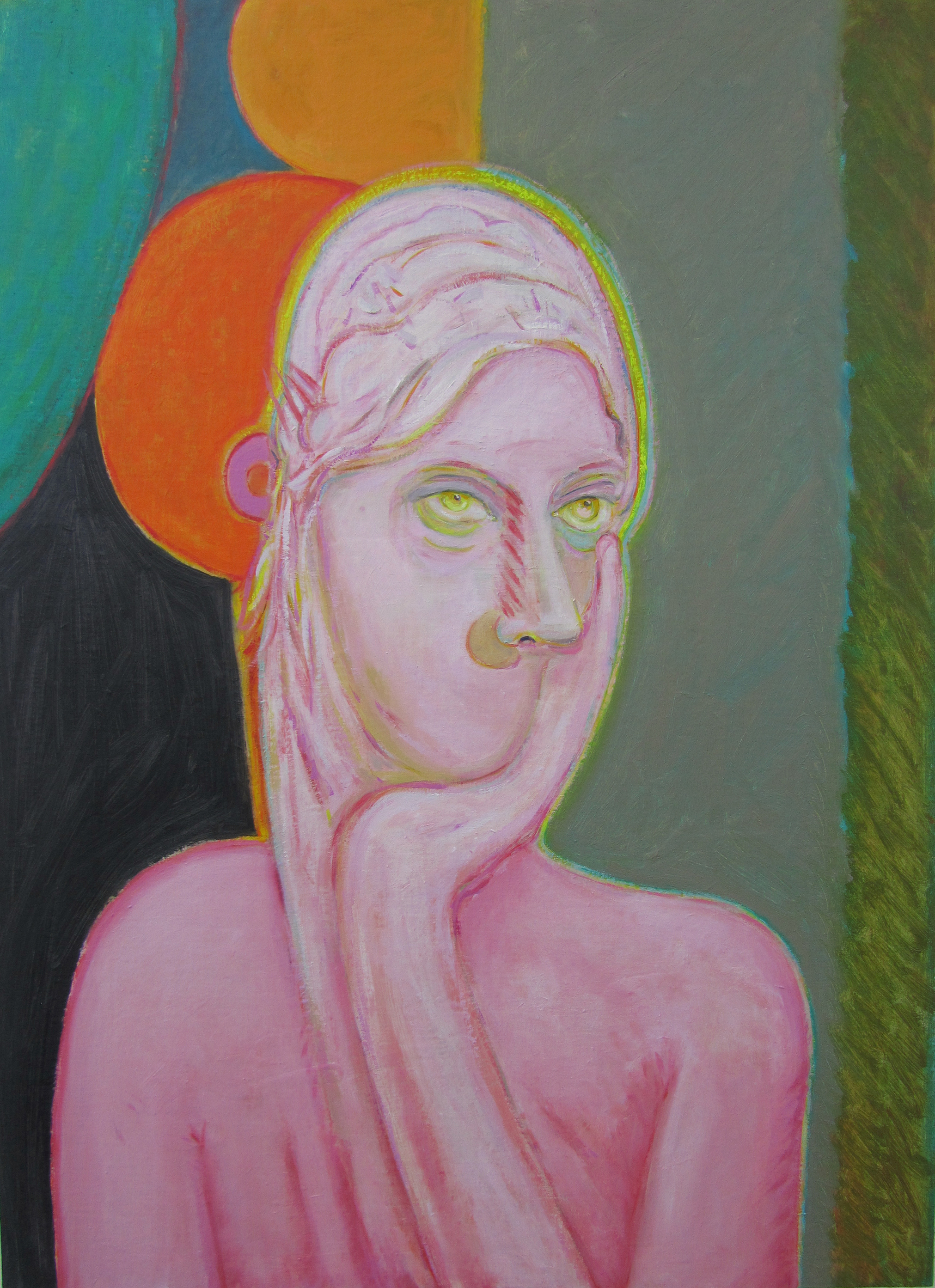 While London-based painter Aly Helyer’s artwork is figurative in nature, at the core is a focus on colour and form. Working in a palette of vivid, saccharine colours, form and marks appear to float above the ground of the canvas, freezing momentarily to reveal a figurative feature, before dissolving again into pure colour. The faces and figures that reveal themselves in Aly’s paintings are never fully formed, rather remaining transient and suggestive. Aly’s approach to painting is similarly fluid. Without focusing on what a painting may be about, she responds to the challenges and interplay between colour, figure, pattern and ground. It’s through this process that she says a kind of psychological narrative begins to emerge, which is less bound to a linear story than an emotive response to the dynamism of painting itself.

Aly has been exhibiting in solo and group shows around London since the mid 90s. The bright colours and seeming naivety in her work bely their grounding in art history. Aly cites the work of Pontormo as an influence, and explains in the interview to follow how she looks to Renaissance and Medieval art for depth and compositional reference. We caught up with Aly in her corridor-like studio in London to talk painting, colour theory and find out more about her work. 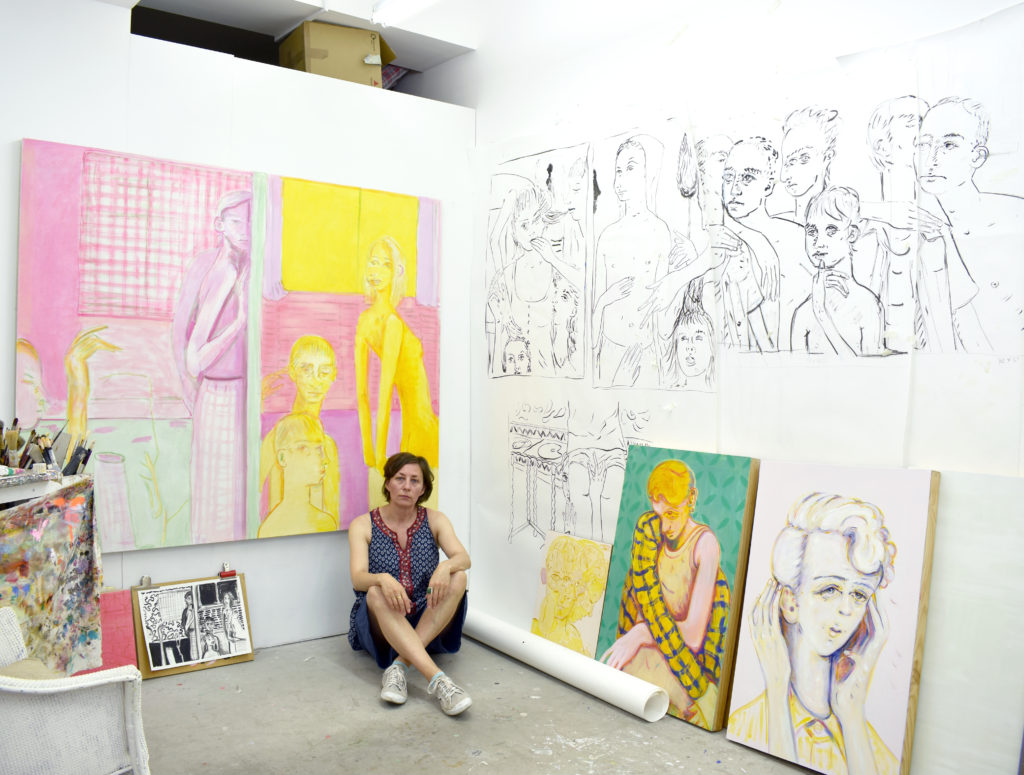 AMM: Hi Aly! To start us off, can you tell us a little about your journey as an artist so far? What have been some of your career highs and lows, turning points, challenges or milestones?

AH: I studied painting at Chelsea in the 90s. I had no idea that you could have a career in painting and still find it hard to think about what I do in these terms. I was lucky that I was able to study something I loved and was interested in; I got my fees paid and received a full grant. I’m saddened that studying Fine Art is now becoming elitist again in this country. As painters, we were constantly being told that painting was dead. I remember being asked ‘what do you do?’ and when I answered ‘I’m a painter’ there was this expectation: ‘… and?’ meaning, don’t you run around with a camera?

One of the highlights in terms of my work and a turning point for me was an amazing visit to Florence in 2014. Up until then my work was mostly focusing on the single figure and was really struggling to bring in another figure or presence. In Florence being able to see such amazing paintings still existing in their original settings was mind-blowing to me, you know in the places they were made for and still doing their job. This visit also coincided with a big Pontormo exhibition; I’d only ever seen the two small paintings that are in the National Gallery so, not only was I able to see Pontormo’s Deposition and Annunciation in the church of Santa Felicita, but also many more of his works!

One of my lowest points was losing my studio in Hackney Wick after being there for over 10 years, due to regeneration; I didn’t have a studio for nearly a year. 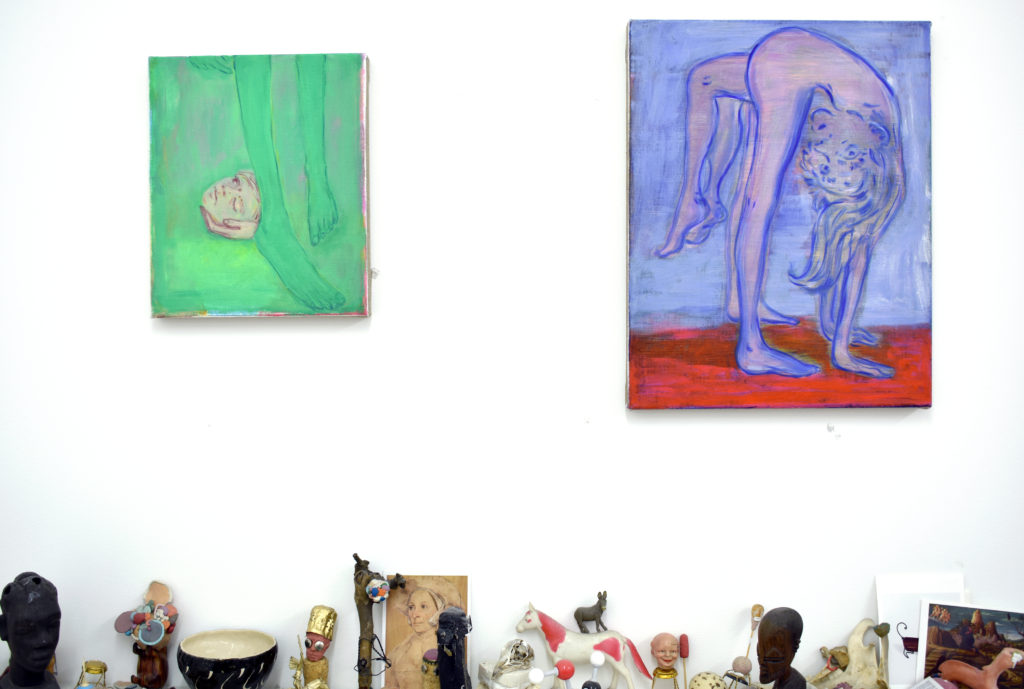 AMM: While your work is concerned with figuration, how do you use colour and pattern in your compositions?

AH: Colour isn’t something I plan or work out; I use it instinctively. I’m excited by the play between pattern, figure, ground and colour – the way you can open up space or close it down – the possibilities and problems it throws up are endless. I’m constantly adjusting how one colour sits in relationship to another and I find the process completely addictive. There’s a lot of layering and over painting and taking things out – it’s the balance/tension between these elements that I’m thinking about, not what is this painting about. It’s through this process that a psychological narrative emerges. I’m lucky that I did have a good foundation in colour theory early on in my Art education going all the way back to my Art A level, so I guess this continues to underpin and inform my work. I still clearly remember my first A level lesson, we were given three books, Itten’s book on colour, Herbert Read’s ‘The Meaning of Art’ and a book titled ‘From Giotto to Cezanne’.

AMM: In your artist statement you say that your work is concerned with interrogating representations of the self. Can you tell us more about this theme and how it translates in your art?

AH: I find the idea of narrative in my own painting very problematic; it operates very differently from literature. I don’t see it as a linear narrative and telling a story is the last thing in my head when I’m painting, but as I said earlier, slowly a sort of psychological narrative comes into play. One of my painting friends talks about these sorts of meanings as ‘being in the bone’. If I knew what I was doing, the mystery or journey wouldn’t exist – it’s very much a journey of discovery and maybe the resulting paintings could be seen as a beginning of a story. I suppose this is what I mean when I say interrogating representations of the self, because on a subconscious level, aspects about my own life seep into the work.

AMM: What ideas are you currently exploring in your work?

AMM: What is your process of painting? Do you plan works before getting started, or allow things to take their own course?

AH: Before my visit to Florence, I didn’t make many preparatory drawings for paintings and largely worked things out as the painting developed. I knew it would be a portrait of sorts and I would start off with one colour. Gradually an eye or a mouth would be suggested and these would act as little anchors and the painting would grow out of these. However, as any painter knows, a process can quickly transform into a technique and a dead end. When I came back from Florence, I was still making quite organic small scale paintings. This is when I made a little painting called “The Beginner” which was much more recognisable as a person and this is when I decided that I needed to start making drawings again. It was around 2015 that my series of night drawings began. Drawing is such a fluid process – there’s no need to struggle with figure ground relationships, or try to create narrative – it just happens. 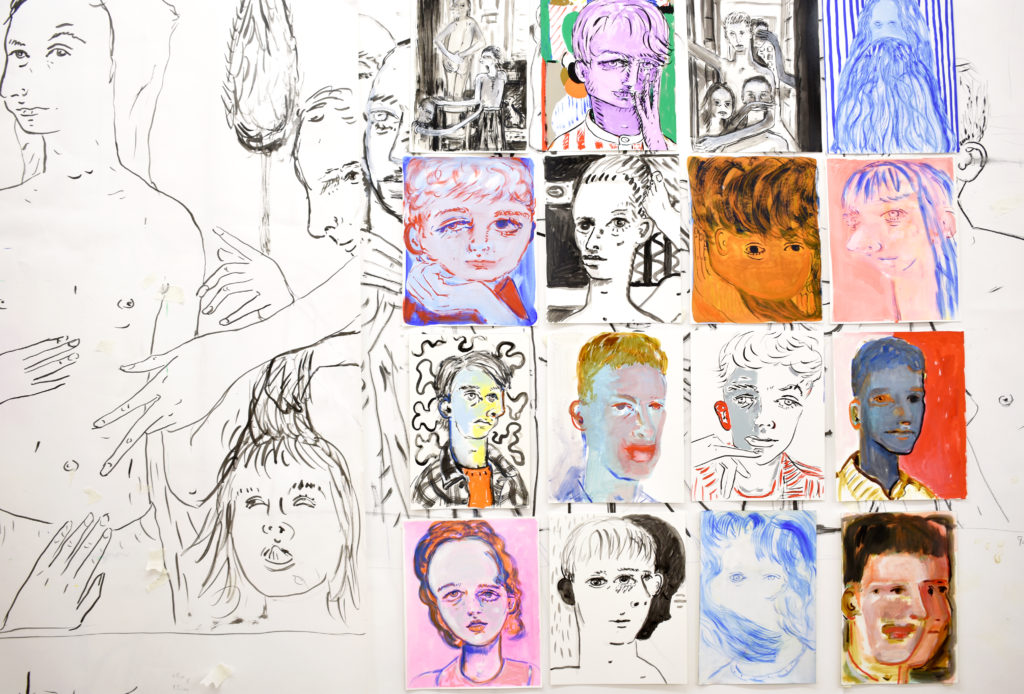 AMM: How do you know when a painting is complete?

AH: A difficult question! I work on several paintings at a time – some can take months. I often turn things around when there’s a problem – or paint things out. I’ll then come across something and it’s as if the painting has been waiting for this last piece of the puzzle; that wait can be six months or more. Other times it feels as if an almost completed painting has fallen out of me – but this is extremely rare and is the most problematic in terms of starting another painting, because you want the next one to do the same, which of course never happens. It’s really the painting that seems to say when it’s finished, I find.

AMM: What is a typical day in the studio for you?

AH: I usually get in around 11am. My studio is a bit like a corridor and at the end I enter is the coffee machine, at the other is a sofa. I make a coffee and head to the sofa trying not to look at anything on the walls. I manage to ignore my paintings for a couple of hours and listen to the radio. I sweep up and do a bit of tidying. Then it’s usually time to eat – can’t paint on an empty stomach! I know that this avoidance is really a way of emptying my head out of all the useless distractions that it has in abundance. I switch the radio off, as I can’t paint with it on and then switch on my amp as I can only paint to music I know really well. I guess the music acts as another layer to seal the outside world out. Sometimes I have a nap for 20 mins and then, without thinking about it, I’m at my palette and painting. I usually work until 10pm, sometimes a bit later. 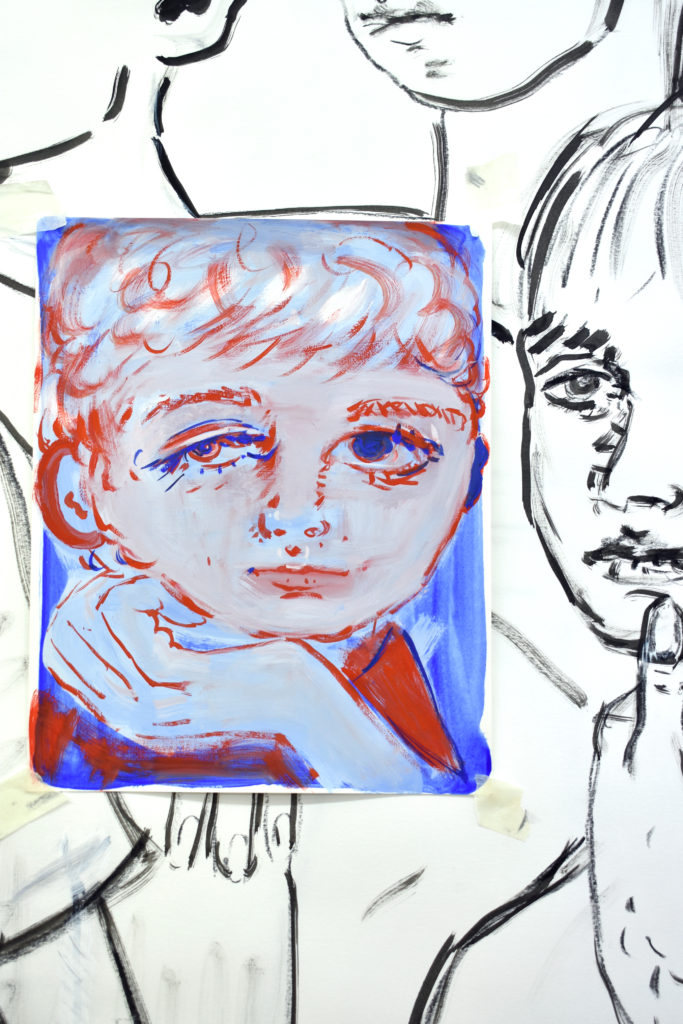 AMM: What are some of your other interests besides making art?

AH: Poetry, Anna Akhmatova is one of my favourites and Philip Larkin, also when I can afford it, going to see live music or the theatre.

AMM: What is the London art scene like right now? How and where do you see yourself fitting in?

AH: Well, there are a lot more galleries since I graduated back in the 90s. It’s only in recent years that I have felt part of a painting community. The first incarnation of Turps Gallery, which was called Lion & Lamb back in 2012, was the first place where painters could curate shows for other painters. So quite quickly a sense of a painting community grew, which was incredibly supportive and we would all meet regularly on a monthly basis and because the gallery was already in the pub…. This sense of community has also been helped by sites like Instagram – suddenly to see what’s happening globally not just in London is wonderful, and since I’m quite a shy, private person it’s a perfect foil for an introverted extrovert like me.

AMM: Anything exciting coming up? What’s next for you?

AH: My main priority at the moment is painting, I’m working on a group of large, quite complex paintings, which I’m very excited about. I’m also working on a proposal with a couple of other London based painters (Paige Perkins and Anna Jung Seo) for a show later on in the year. I’m very pleased to be taking part in a group show this summer called Night Swimming at Mission Gallery, Swansea, organised by Liam O’Connor/Lara Davis at LLE, an artist led curatorial project with a focus on contemporary painting.

Find out more about the artist: www.alyhelyer.com

Text and interview by Layla Leiman or ArtMaze Mag. 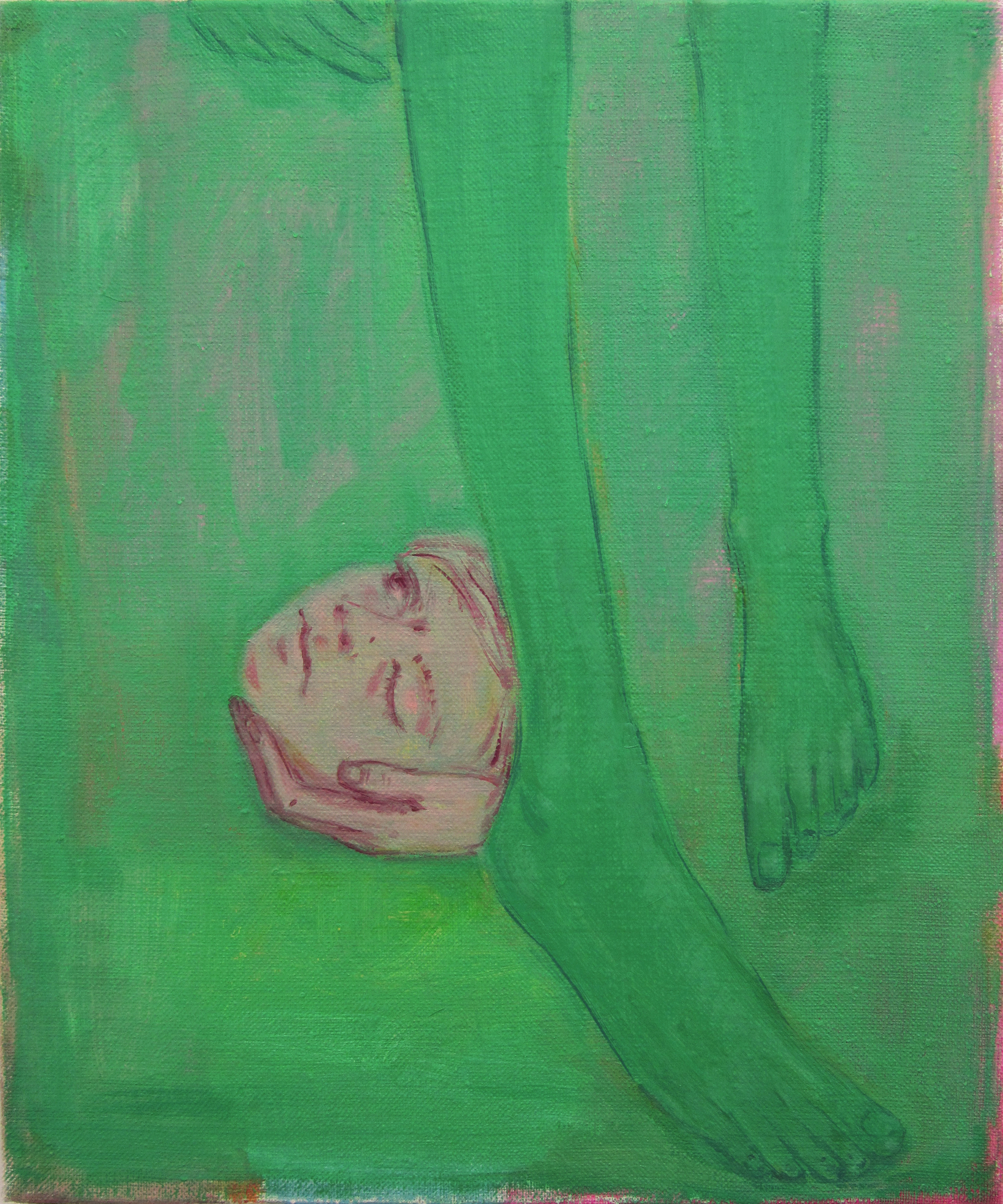