“I am all the horses I’ve painted”: Douglas Cantor on capturing individual, personal experience 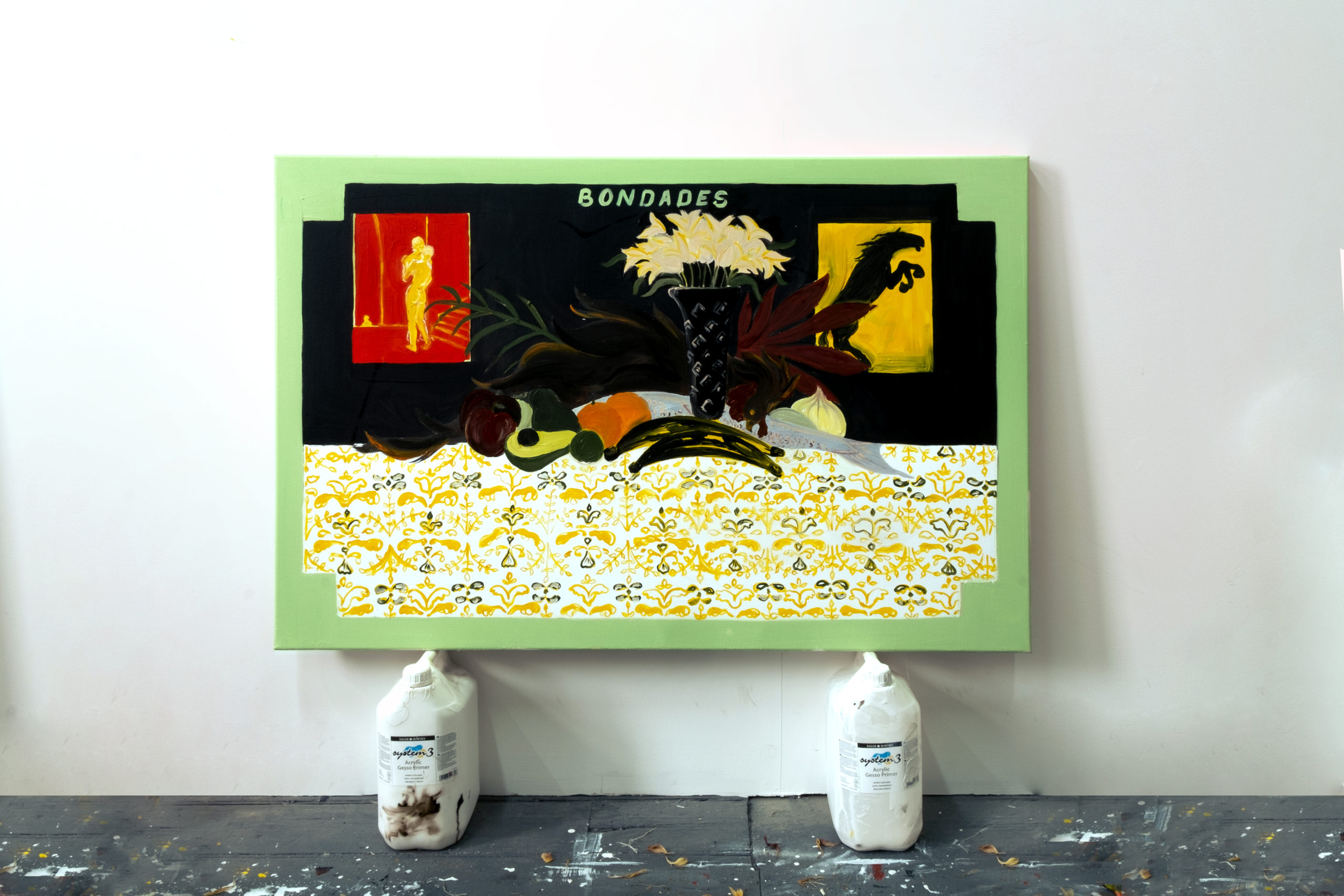 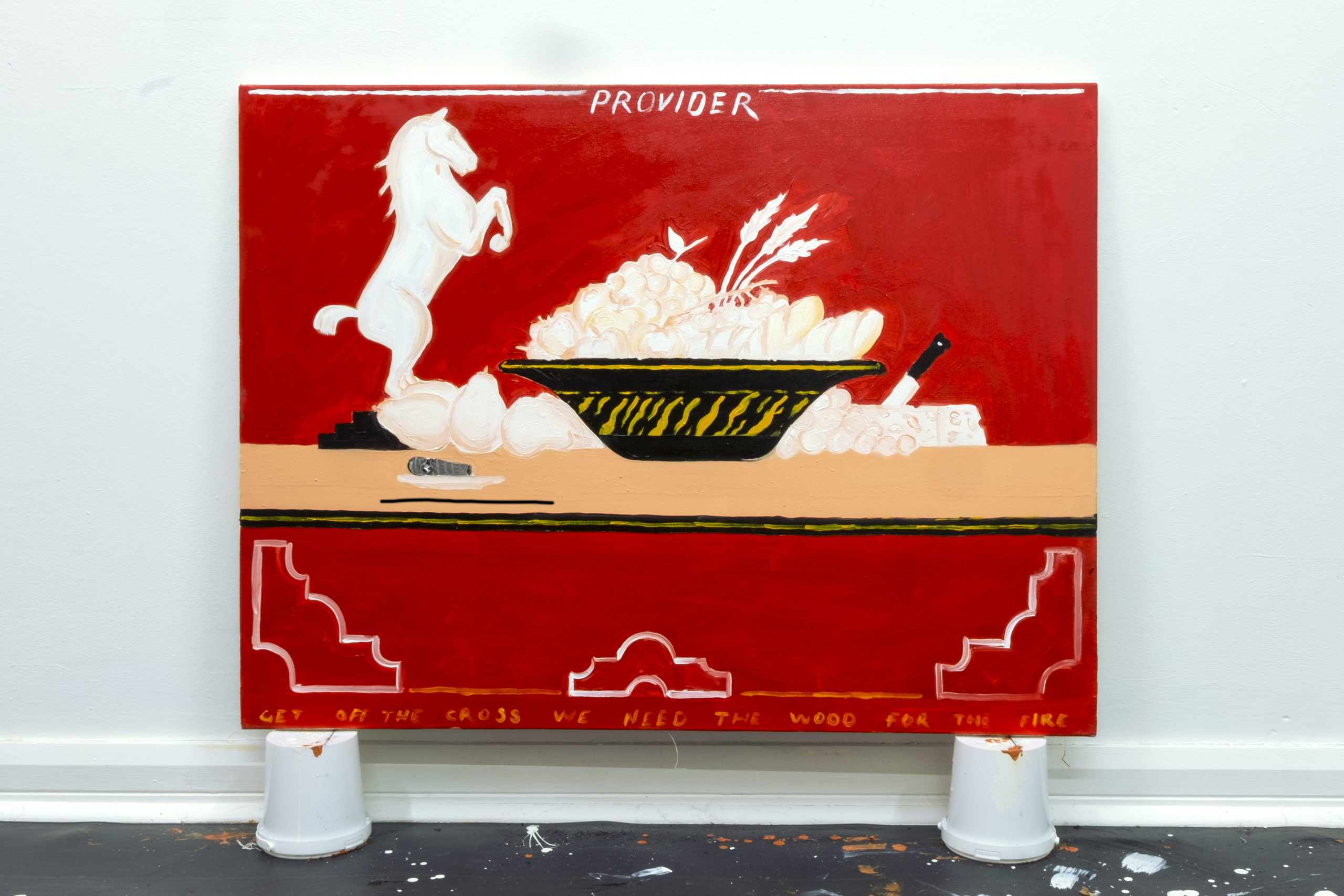 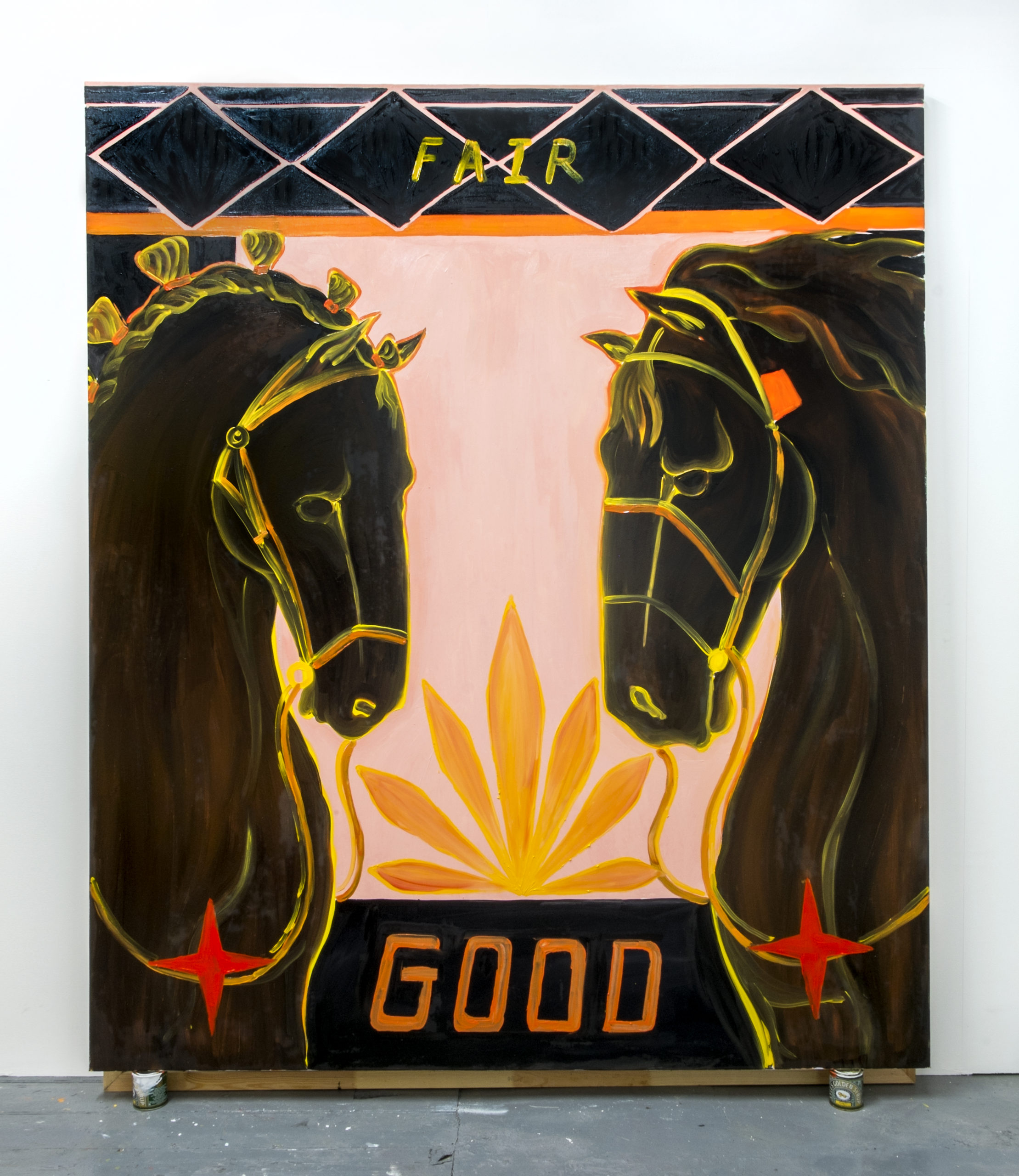 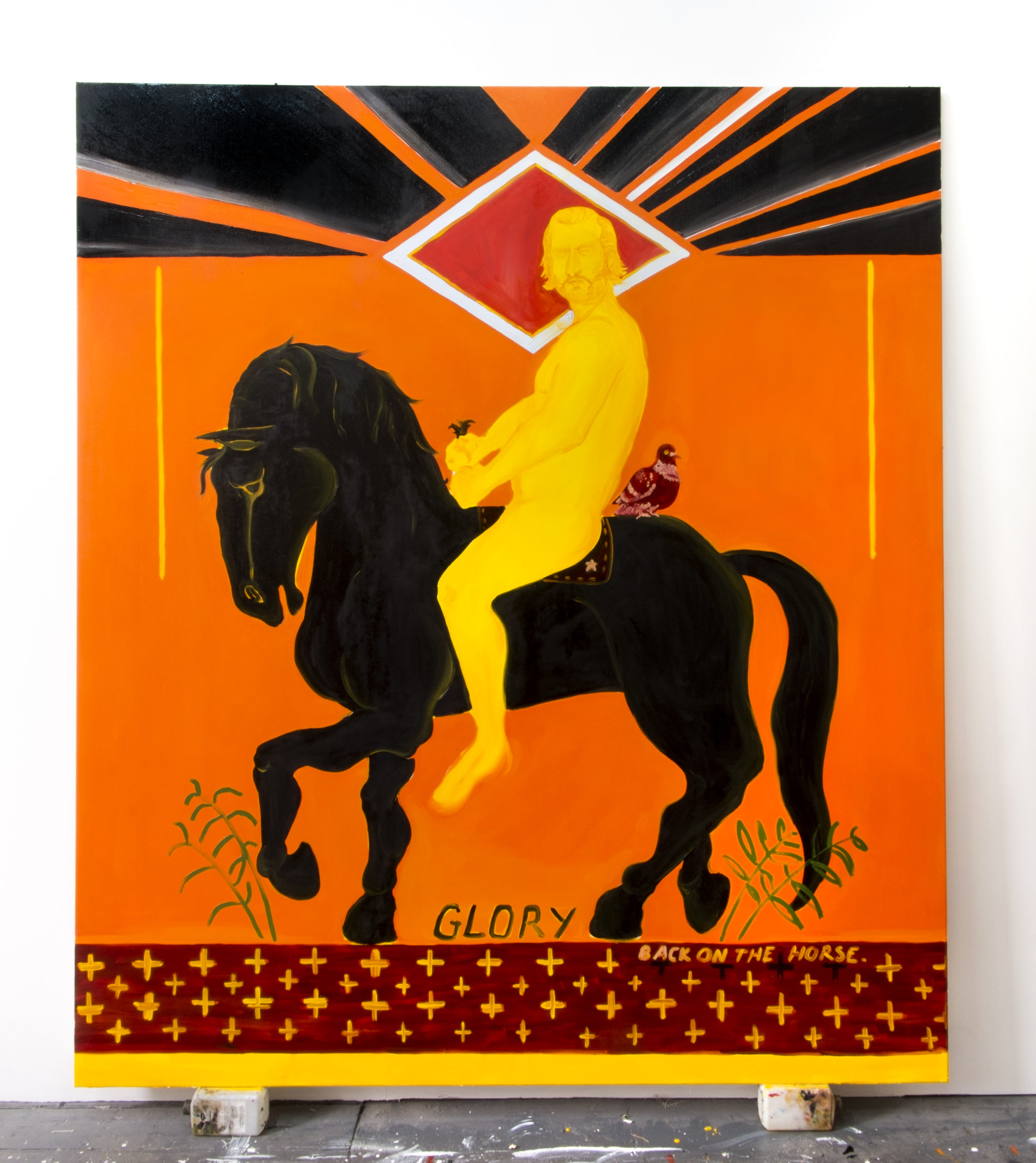 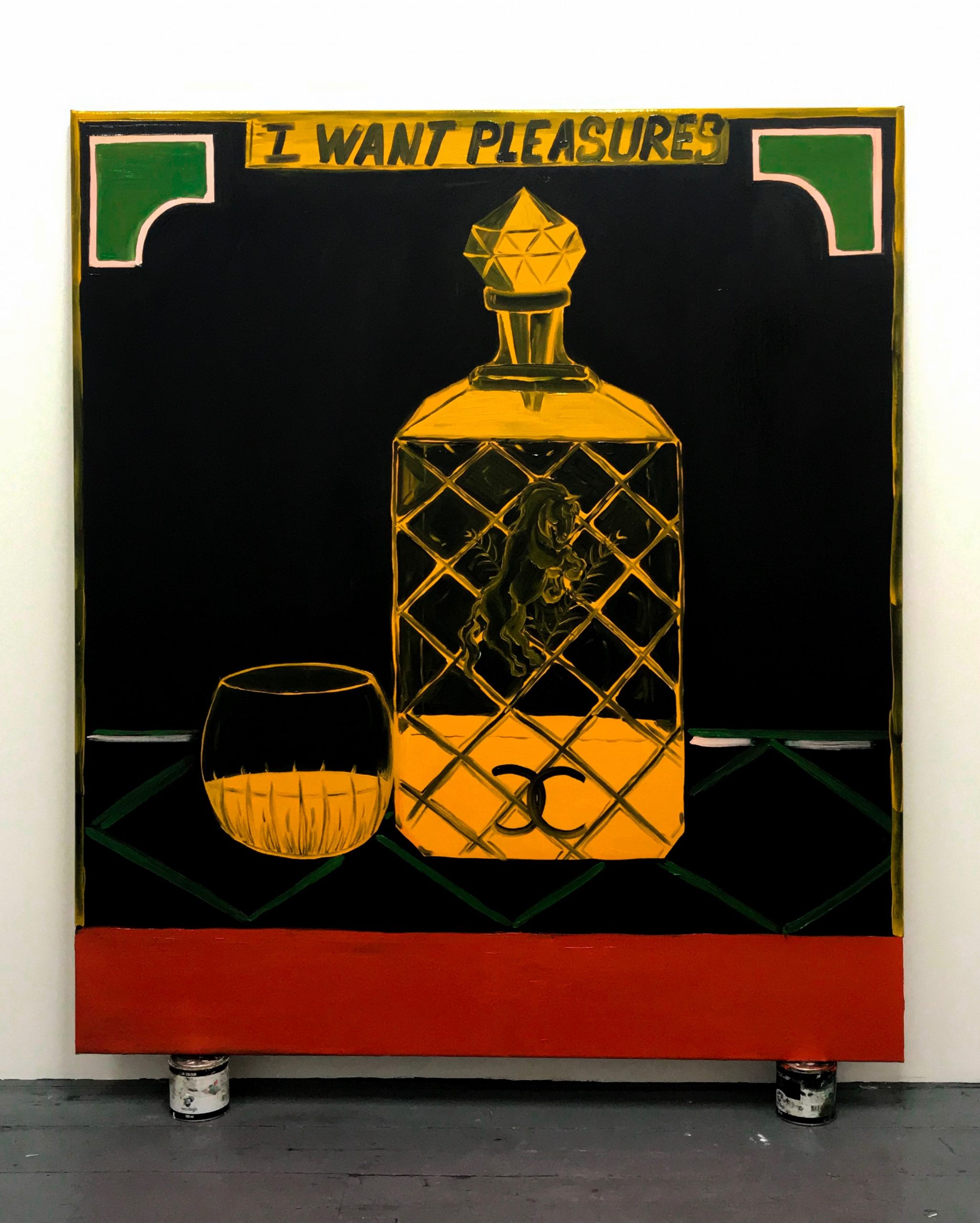 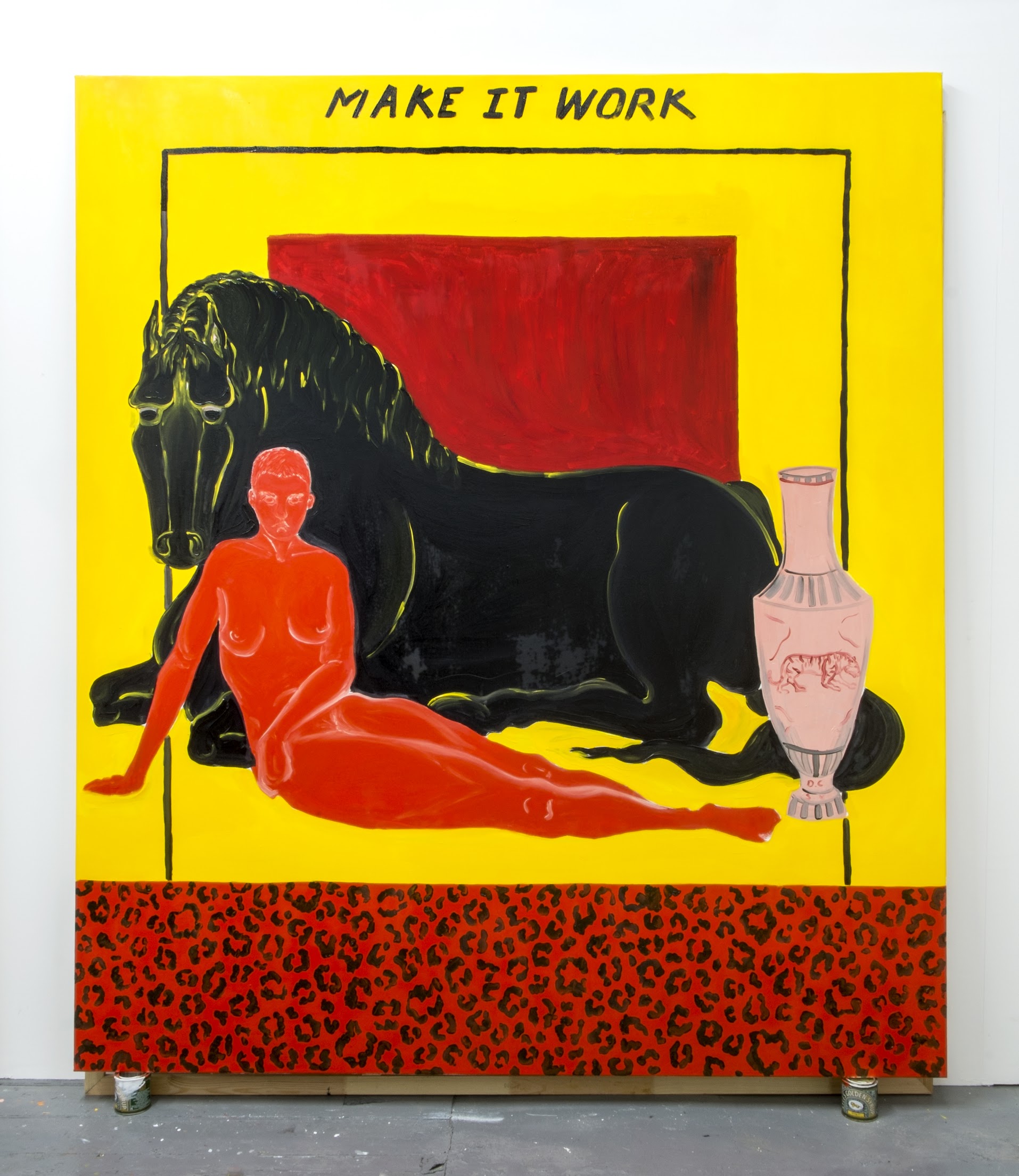 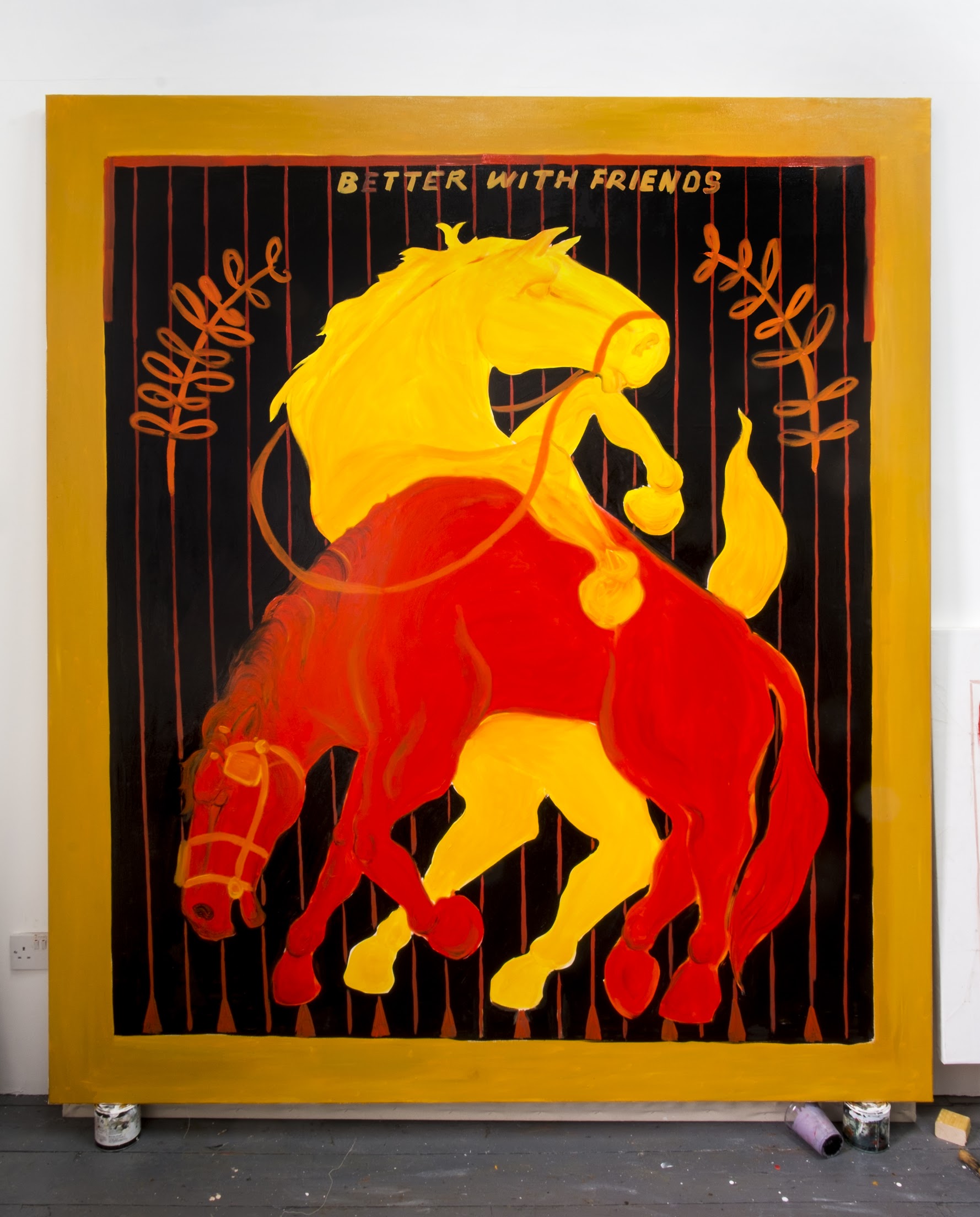 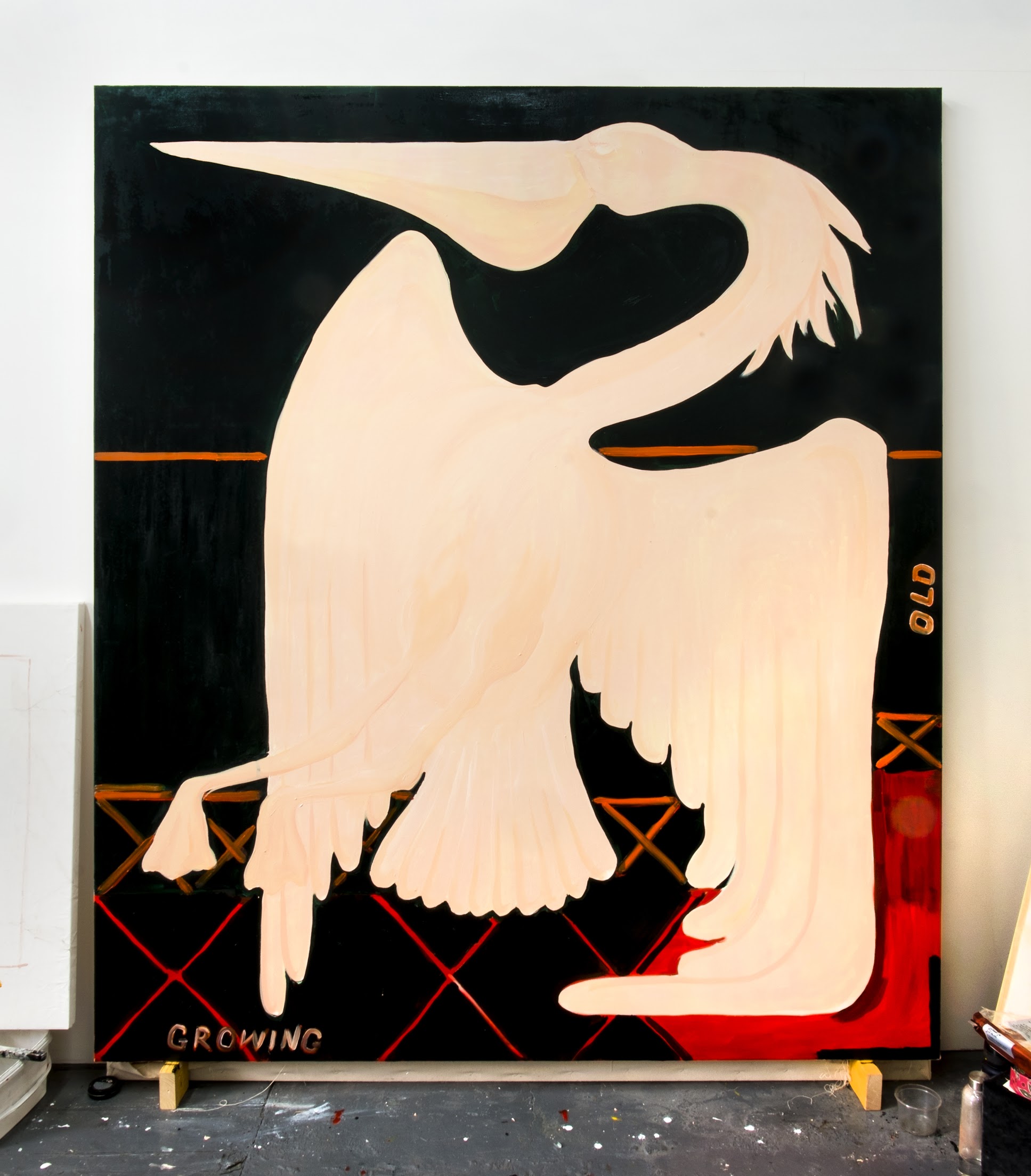 Colombian-born painter Douglas Cantor creates bold, richly coloured works that incorporate text and symbols alongside human and animal figures. Having moved to the UK initially to study for an illustration degree, Douglas has since veered away from client-based and commission-focused illustrative work to pursue a more painterly form of expression. His practice today is based in conveying his own experience via symbolic imagery and phrases that hold personal significance. One such motif that features prevalently in Douglas’s work is that of the horse, which appears in his paintings as a muscular, powerful being. In stylistic terms, Douglas draws on the aesthetic of religious art, as well as the black and terracotta designs characteristic of ancient Grecian pottery. There is a nod, too, to sporting iconography in his inclusion of logos from recognisable sports brands and in the athletic posturing of his figures, a theme that arose, he tells us, in response to the creative culture of Berlin and its perceptions of high and low-brow culture. Douglas now lives in Glasgow with fellow painter Sophie Vallance, both his partner in life and in art. He talks to us here about adapting to new creative environments, forging images that resonate with him as an individual, and cultivating honesty in making. 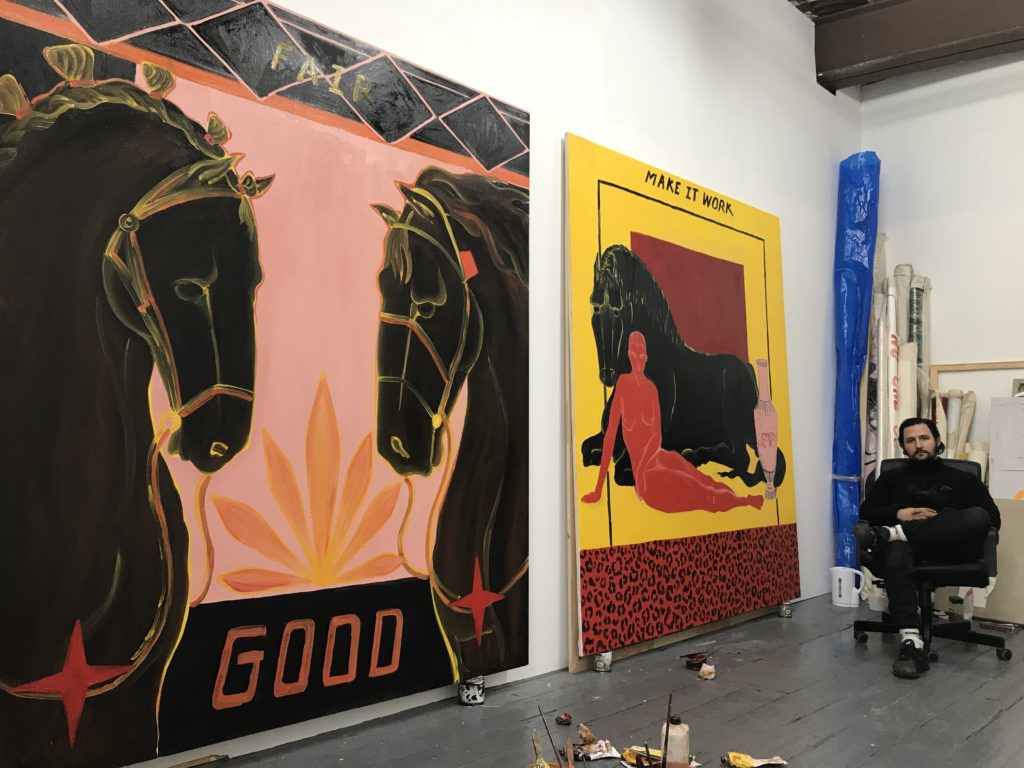 AMM: Can you tell us a bit about your background and how you came to pursue painting?

DC: I grew up in Colombia; I had the opportunity to move to the UK at age 19 to learn English and see if I could get onto an art course at university. Coming from South America, (understandably) you grow up surrounded by this traditional understanding of art that places value on craft, skill and usability and often has little time or understanding for fine arts, unless they make money. So I had it in my mind that I wanted to do something communicational, something my family back home would understand, you know?I ended up doing illustration at Camberwell but It didn’t take long for the whole thing to feel wrong; I hated the briefs, clients, working on set projects and so on. Luckily Camberwell was very lax on what an illustrator could be, so I spent my first year teaching myself how to paint (or a very graphic version of painting at least), which got me through that first year.

By year two of the course I wasn’t having it, so I just started painting and I fell in love with it. It’s such an indulgent activity; nothing had ever clicked for me like that before and I became so passionate about it. I considered dropping out but that would have meant going back to Colombia so I just painted my way to graduation. In hindsight I should have switched courses but no-one told me that was an option.

AMM: What has had the biggest impact on your creative practice?

DC: Without a doubt, Sophie Vallance. Seeing her make work has always challenged my understanding of what art is. I had a very restrictive idea of what was allowed when it came to making work and for a long time it was a big internal struggle of mine – the work I wanted to make vs the work I felt I was allowed to make, or that it made sense for me to make. Sophie has fluidity and instinct and viscerality in her way of doing things, honest making I call it. Making work alongside her, I think, is the only way in which someone like me would have ever reached that place of self acceptance and honesty within making.

AMM: You’ve lived and worked in a few different countries; in what ways have these experiences influenced the way you work?

DC: I’m old enough to recognise that I’m fucking awful at transitioning. I guess it’s in that sense that geographical context informs my work. When you move, there are long chunks of time when it’s all about trying to settle, reacting to the new things and the feelings that you go through – a period of shock I guess. All of that becomes the work. After a while when you finally feel more comfortable you filter out all of that and get back to the core of what you actually are and make and want to make, rather than solely reacting to your environment. Plus, after going through these experiences you end up with a few new things that are now a part of you and that you carry with you in your work. I’ve never been in one place for long enough to do a lot of that second part. 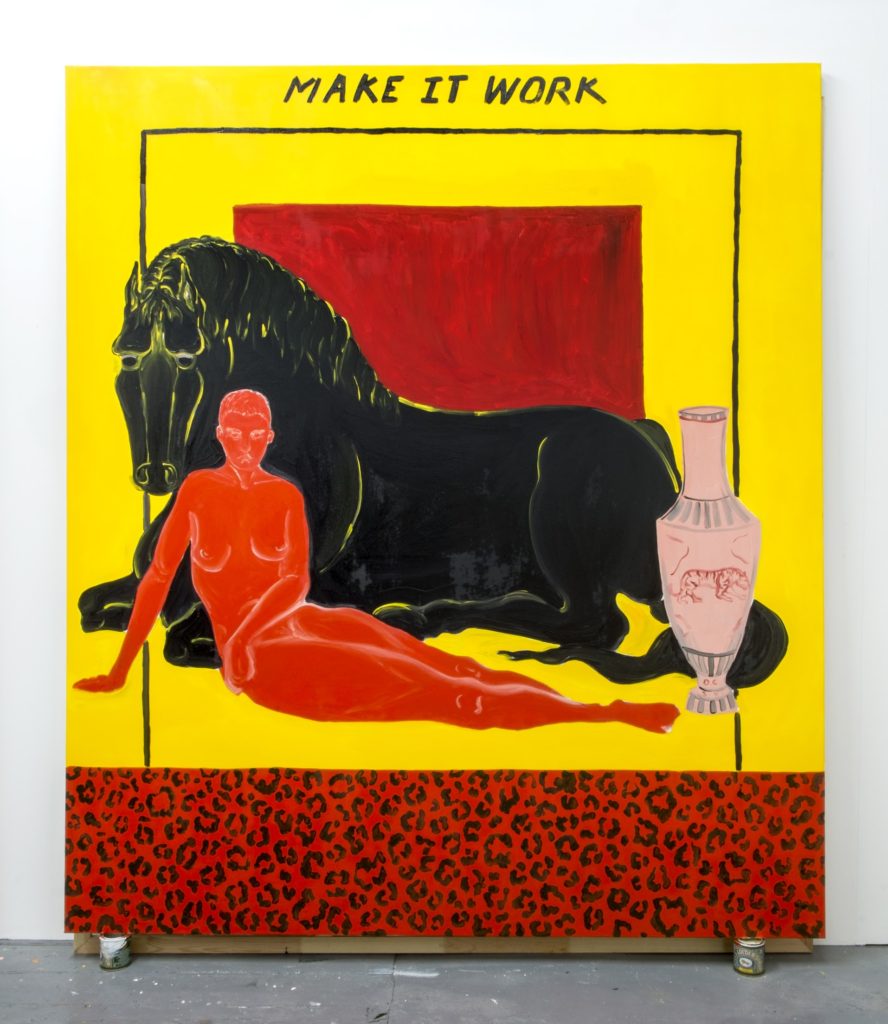 They Say You Gotta Break the Horse But They Don’t Know Nothing, oil on canvas, 230 x 200 cm

AMM: Would you say that your artistic practice is collaborative?

DC: I actually haven’t collaborated much in my practise; there is a symbiotic thing always going on between Sophie and I but that is just an extension of the fact that we collaborate in life. We share space, experiences, money, conversation and we are happy embracing this. We made an exhibition in Berlin celebrating this, where we actually made a few sculptures together as well as a sound piece. I think that is the only time I have ever collaborated with someone. Thinking as part of a creative group sparks ideas in me that I don’t think I can tap into on my own but collaboration itself doesn’t come naturally to me I guess, since so much of what I make revolves around how I, as an individual, experience life.

AMM: There is a graphic aspect to some of your work; do you draw much on the techniques and imagery of graphic design?

DC: I think this could be said of the work I made in Berlin, but it wasn’t intentional, it was more a reflection of what I had around – a chapter of life.

AMM: I notice that there is also an element of Grecian mythology in your pictures – what is behind this?

DC: It’s probably more in regard to symbolic images rather that Greek mythology per se. I also had a fling with religious art; it’s more the aesthetic of the objects that draws me in, like I’m collecting things.

AMM: What is the significance of the equine motif in your work?

DC: The first time I painted a horse was also the first time that I painted exactly what I wanted to paint. It was a very honest and freeing moment, a moment that became my compass for making, so the symbol is very dear to me. It also has to do with my upbringing – the horse as an extension of the working man, the horse as a symbol of power and wealth. The image of the horse is this universal symbol and has this capacity to convey emotions and meaning. I quickly identified with the image; its complexity suited mine. I think I am all the horses I’ve painted.

AMM: What role does text play in your pictures and how does it relate to the imagery you employ?

DC: Again, it’s things that mean something to me – personal jokes that only I find funny because only I get them. It can also be things I need to say. I feel like all the work I make is for myself so these images and phrases are there to remind me of things I want to remember. 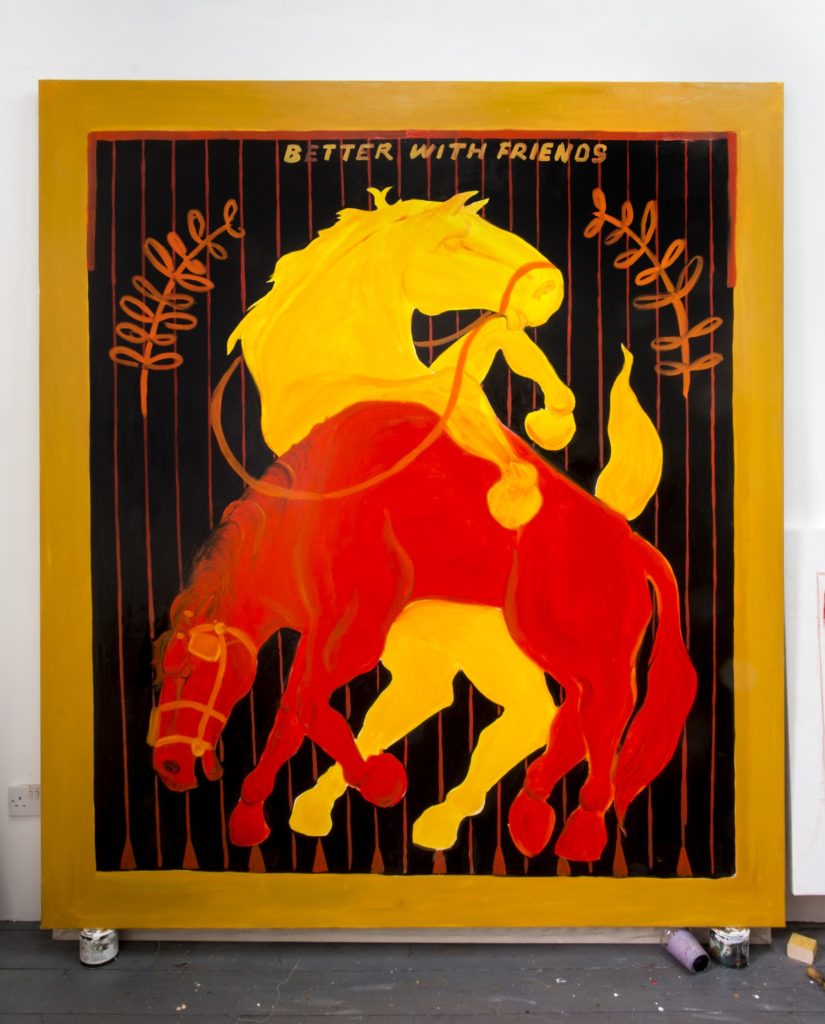 AMM: Can you tell me about the sporting iconography in your paintings?

DC: Berlin – it’s what Berlin did to me. There is a definite conversation there about high and low brow culture that felt very relatable to me and it took the form of that imagery.In what ways does personal experience enter into your work? That’s essentially what I make work about, so, if I was a writer my genre would be autobiographical fiction. Really it all ends up in my paintings.

AMM: What kinds of messages does your work seek to convey?

DC: I don’t think this is at the front of my mind, or at least it hasn’t been for a very long time. I try to make honest work both in form and subject, as brutally honest and as beautiful as I can. At least for myself. After that, it is no longer mine and that’s the way it should be.

DC: I identify a lot with what I make so I don’t need a separation. I had a studio away from home last year and although I did enjoy it, I also missed very much the freedom of everything being in one space – no timetables, no social courtesies, so a few months back I got a place with a big enough room (80% of the house now is studio) which I share with Sophie as we have always shared.

AMM: What’s it like working as an artist in Glasgow? Is there a good artistic community?

DC: Glasgow is a kind place, welcoming when you do your part.

AMM: How do you spend your time when you’re not painting?

DC: Cheffing both at work and after work, cooking is something I really enjoy – feeding people, I do a lot of that. I like to host people who are special to me.

AMM: How do you see your work developing in the future?

DC: I think as you get older you become more and more you. I think it might be the same with painting, or at least I hope so, but the work decides really, I’m just seeing it happen.

Find out more about the artist: www.douglascantor.com 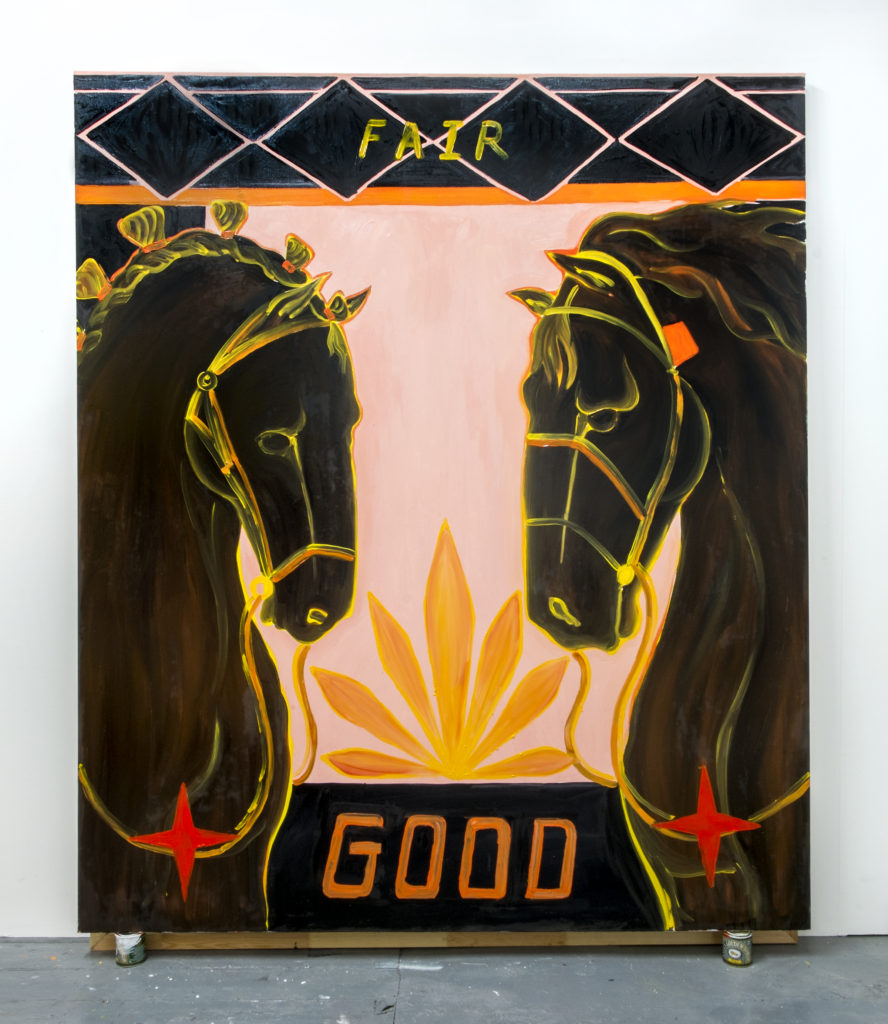