Forming and folding space: In conversation with Sanne Maloe Slecht 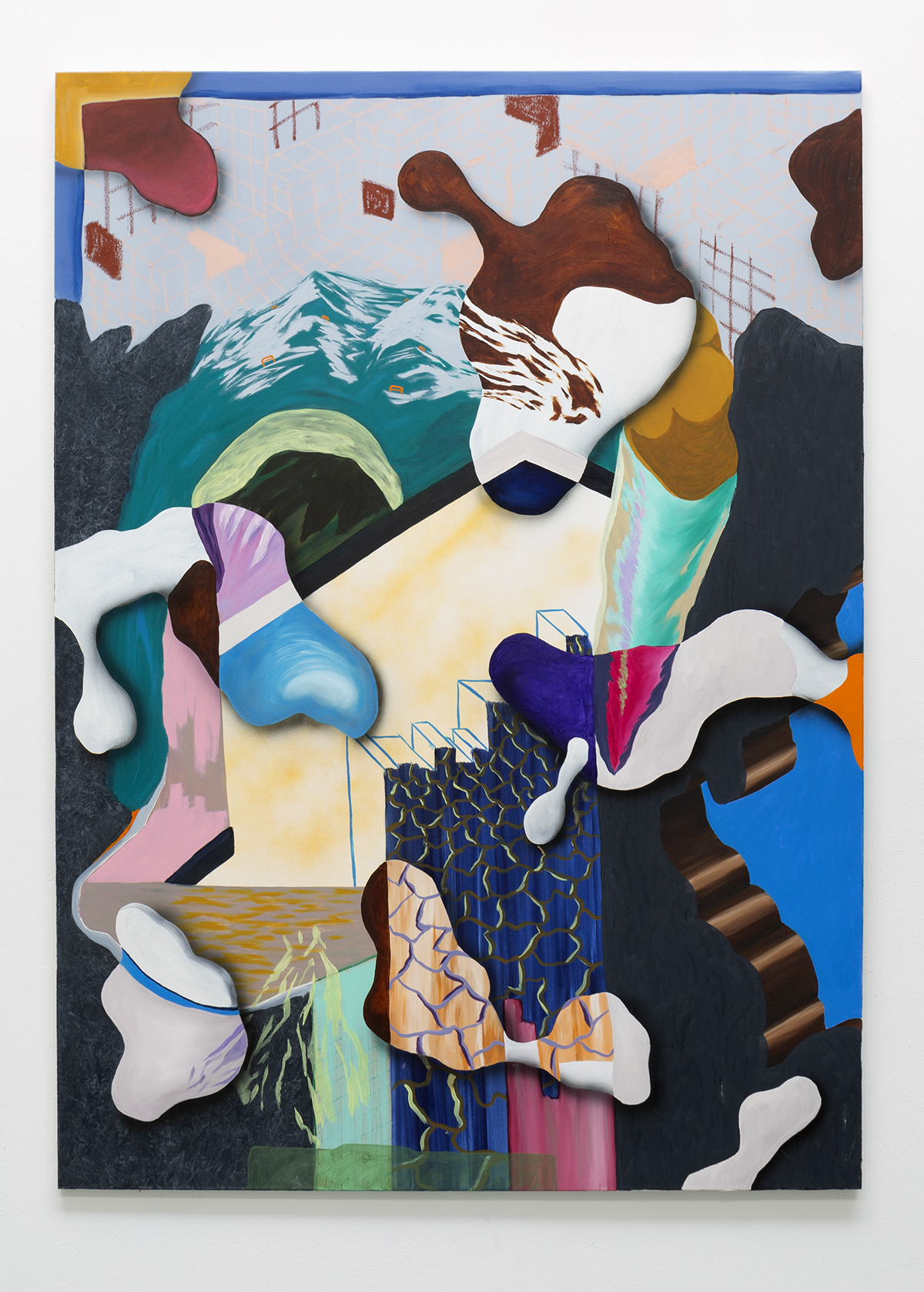 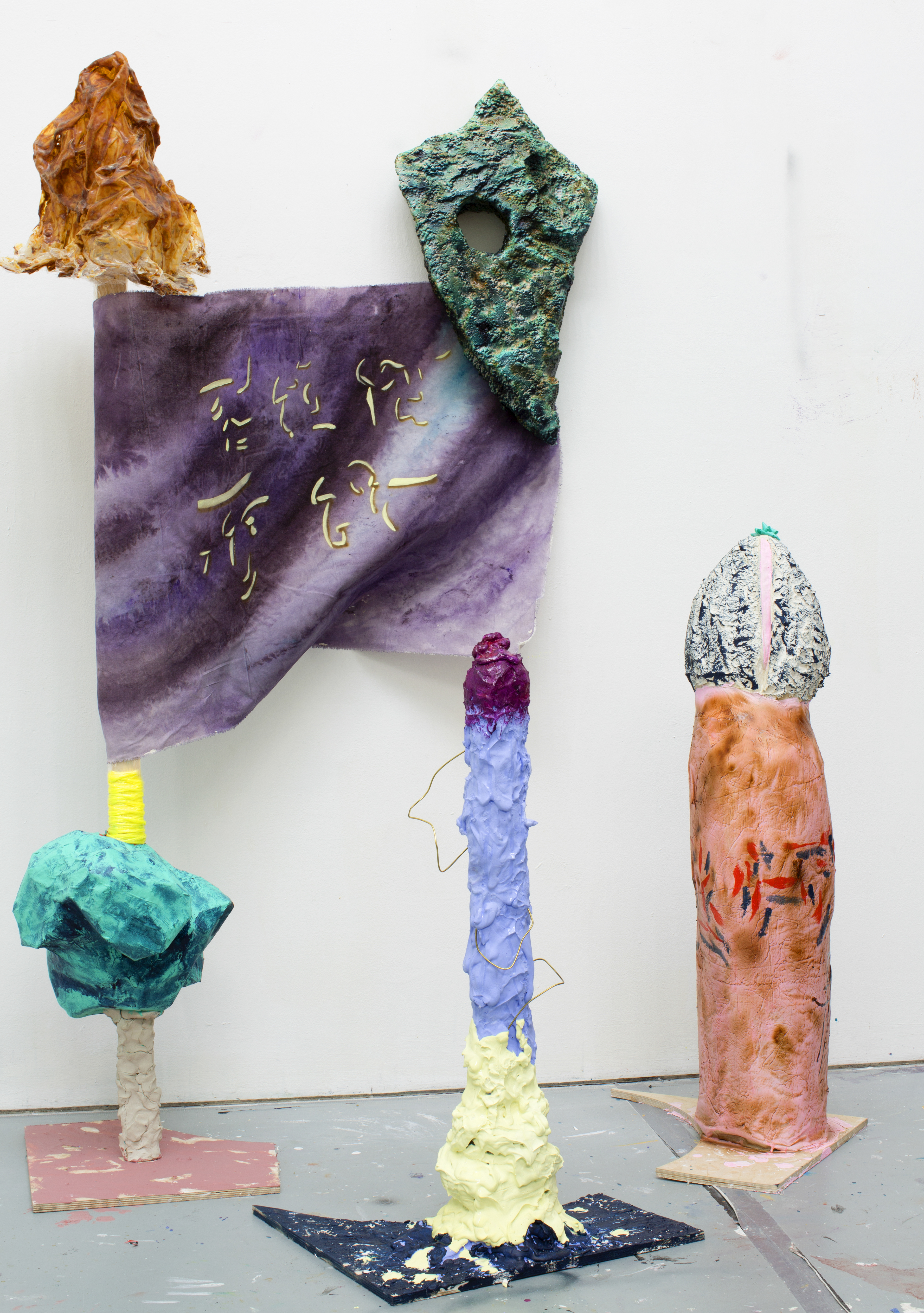 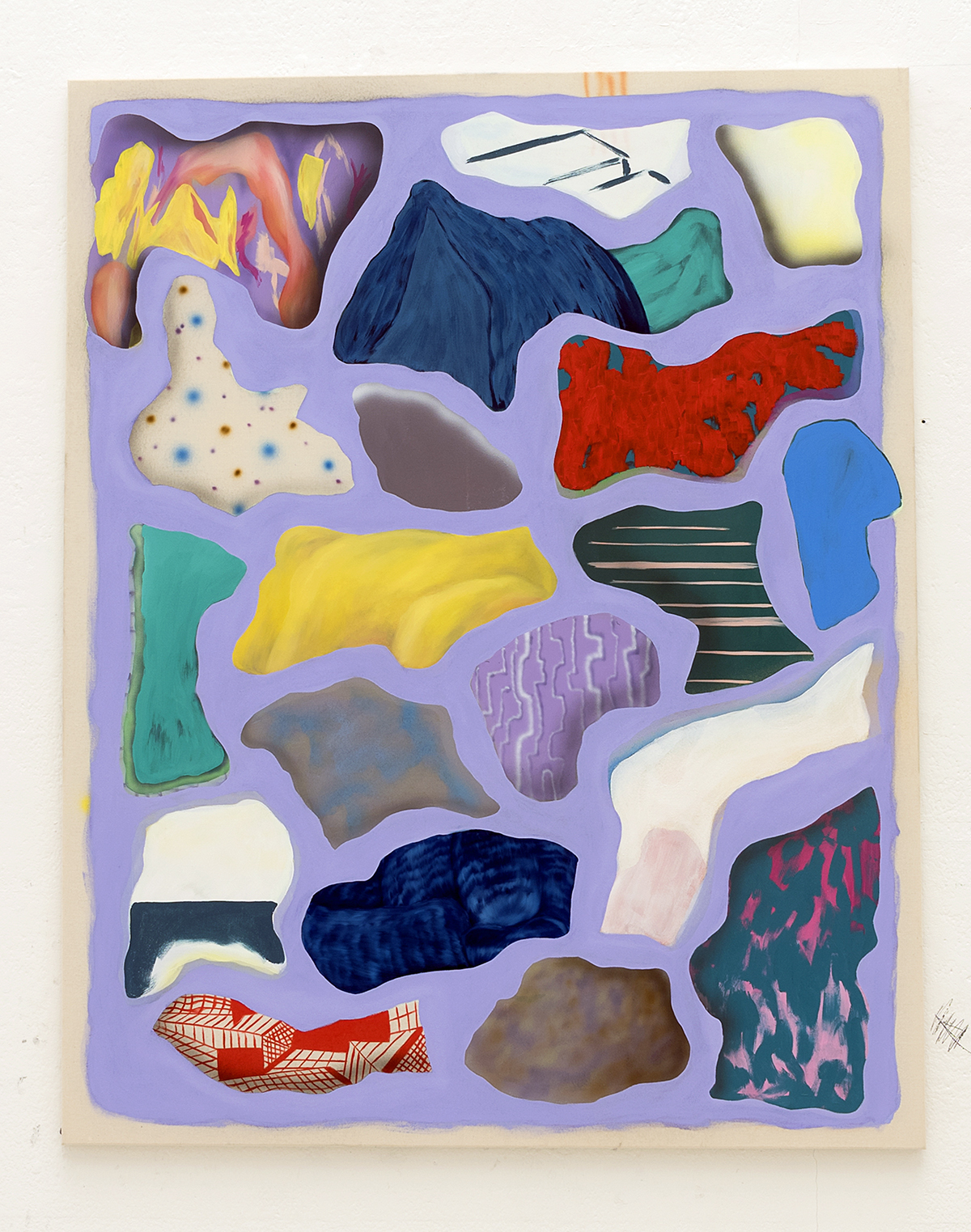 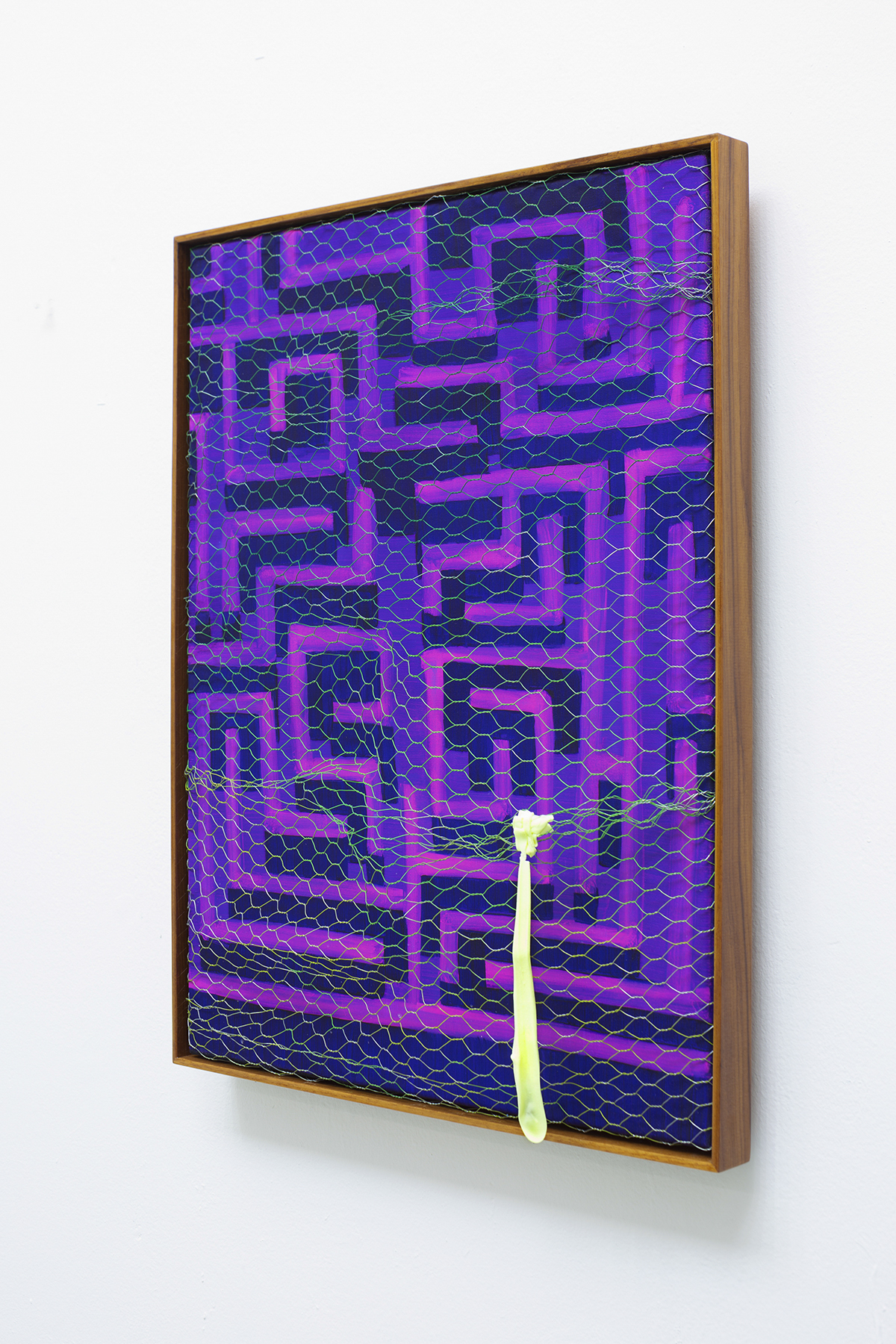 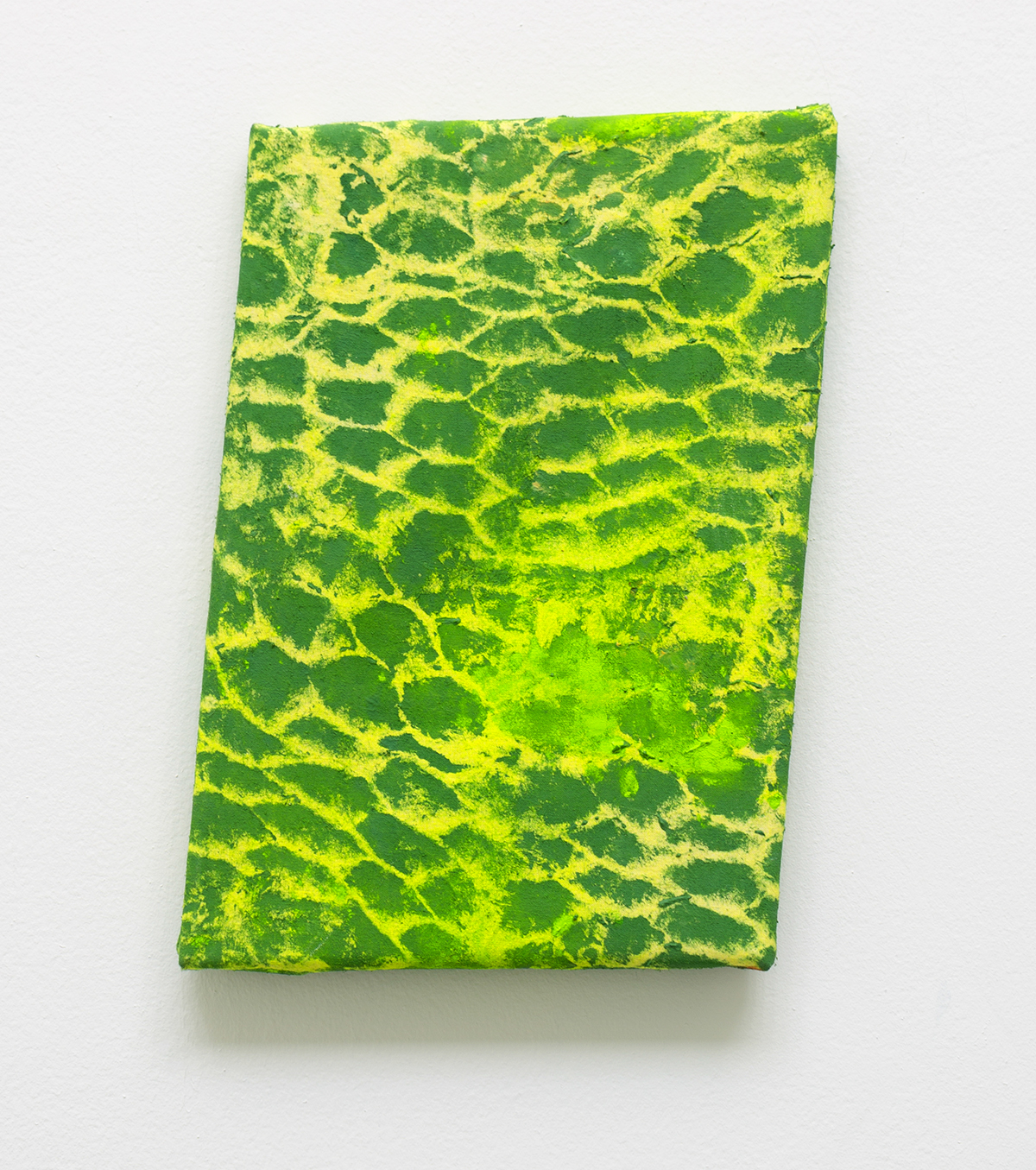 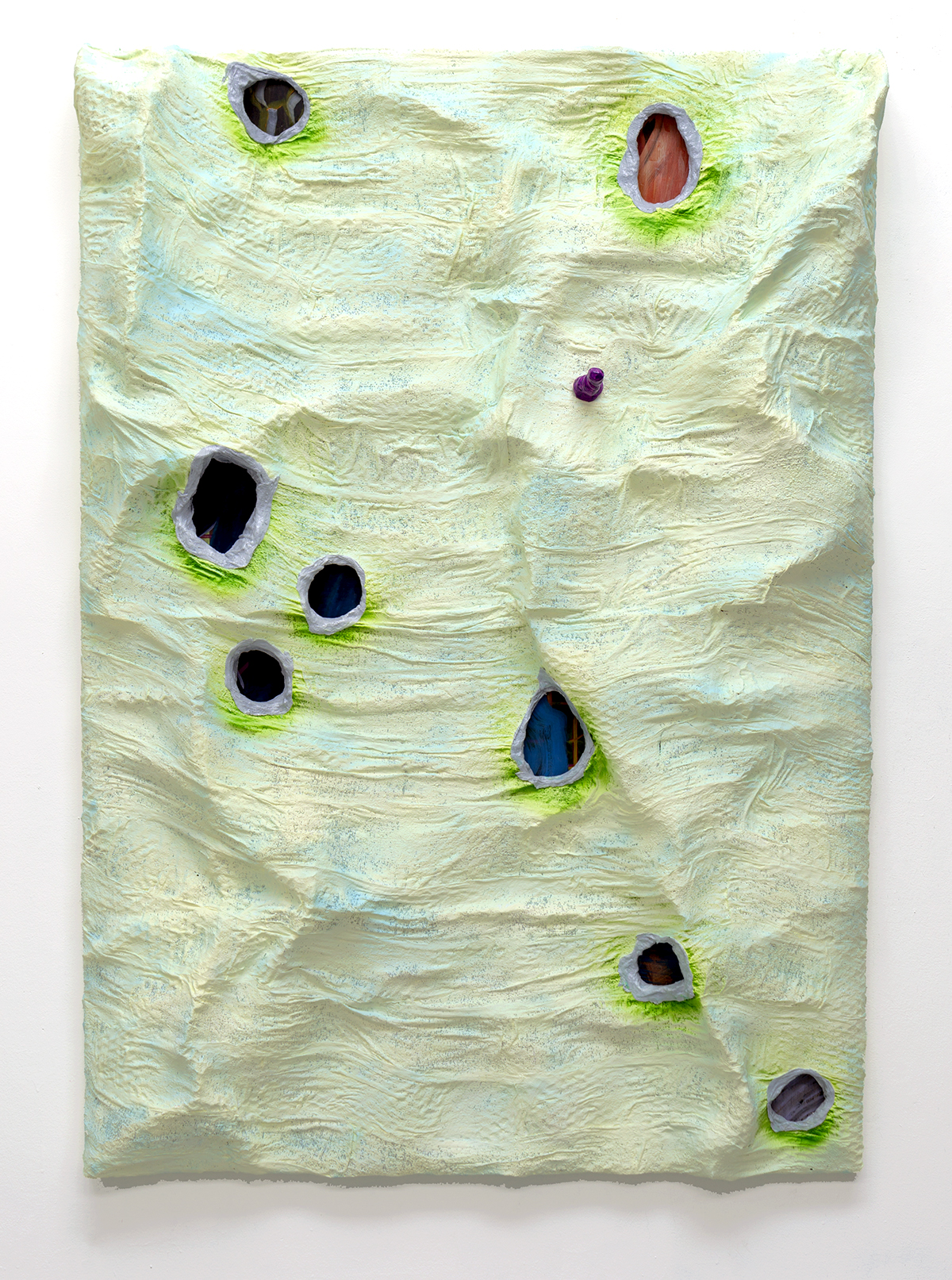 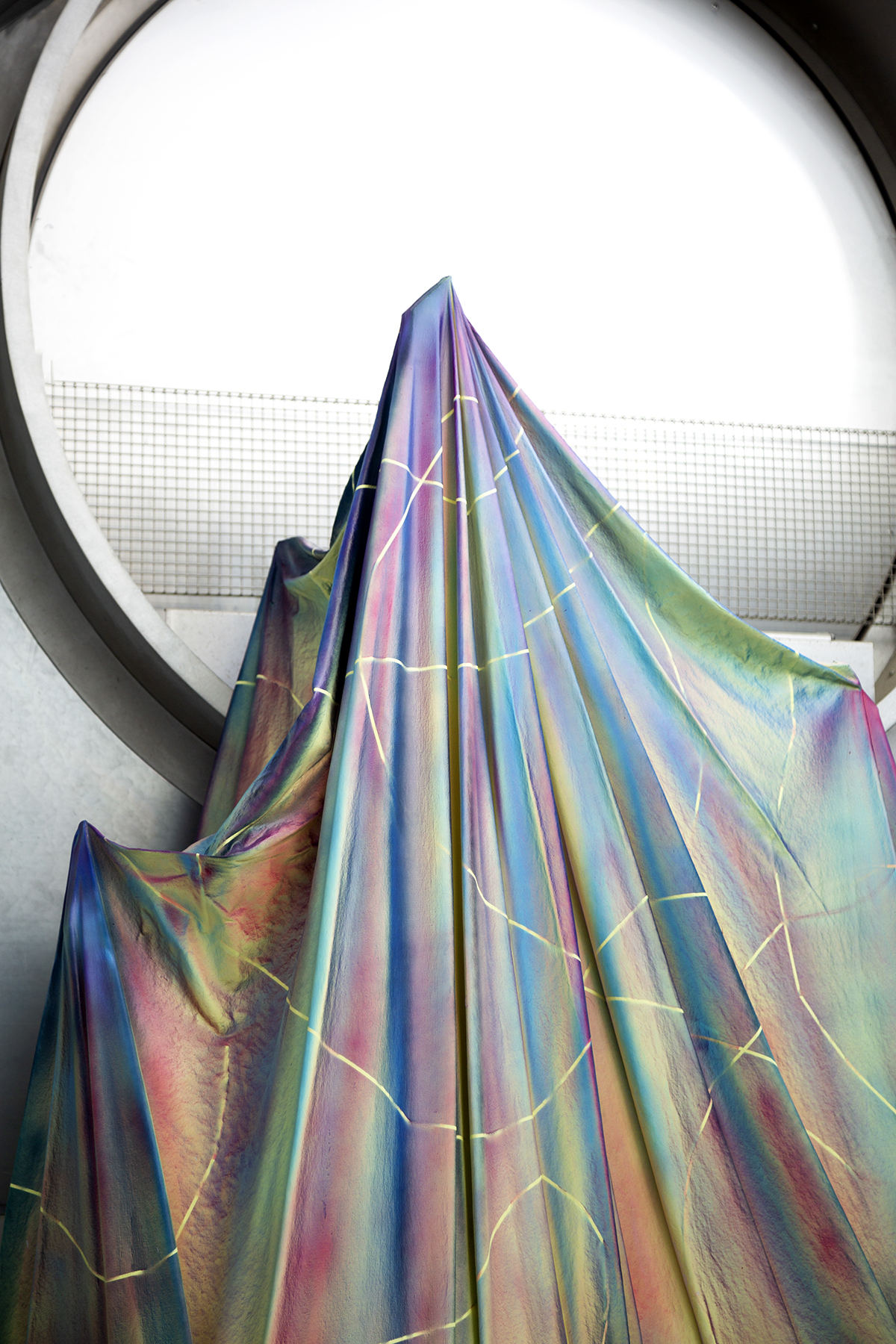 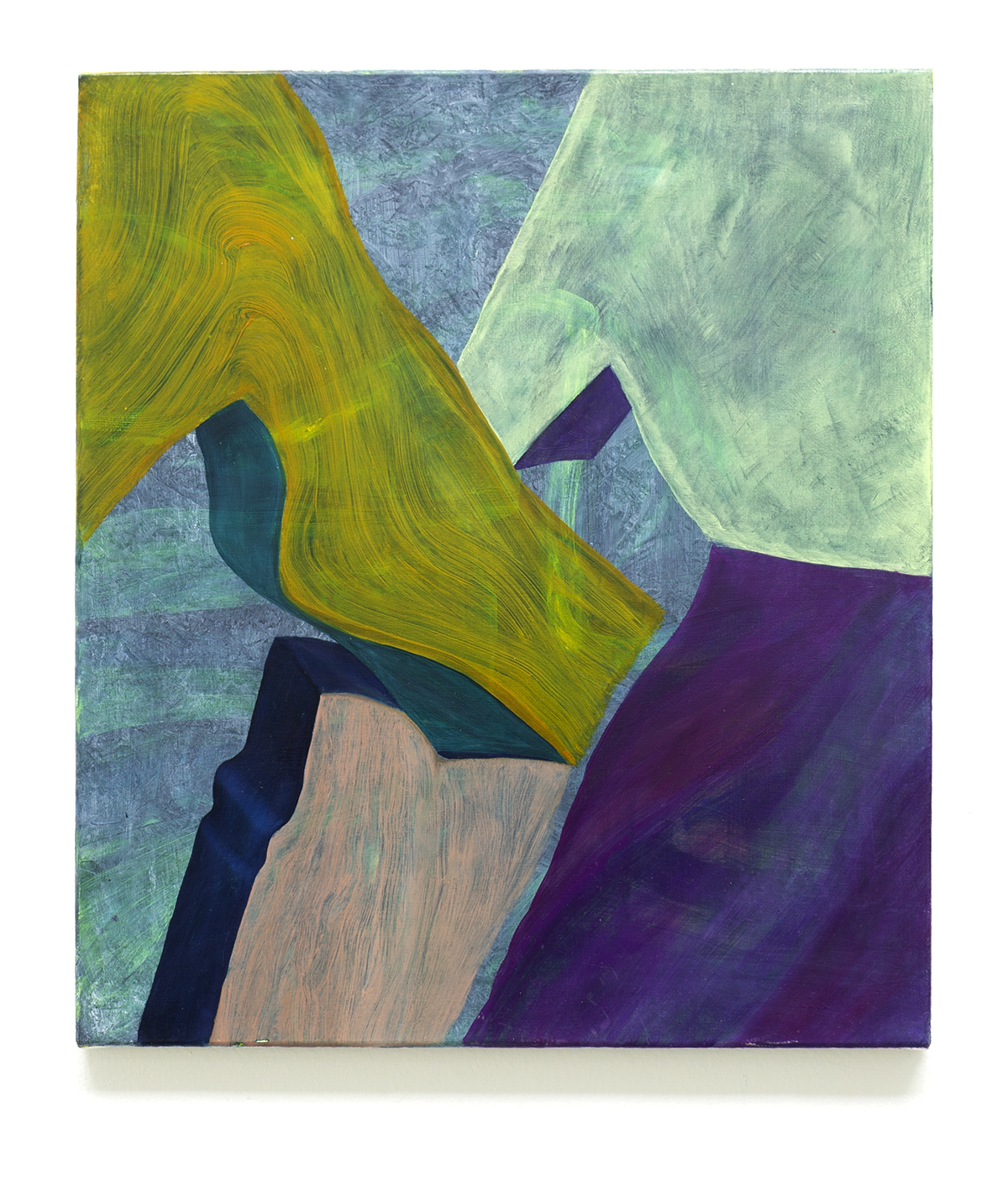 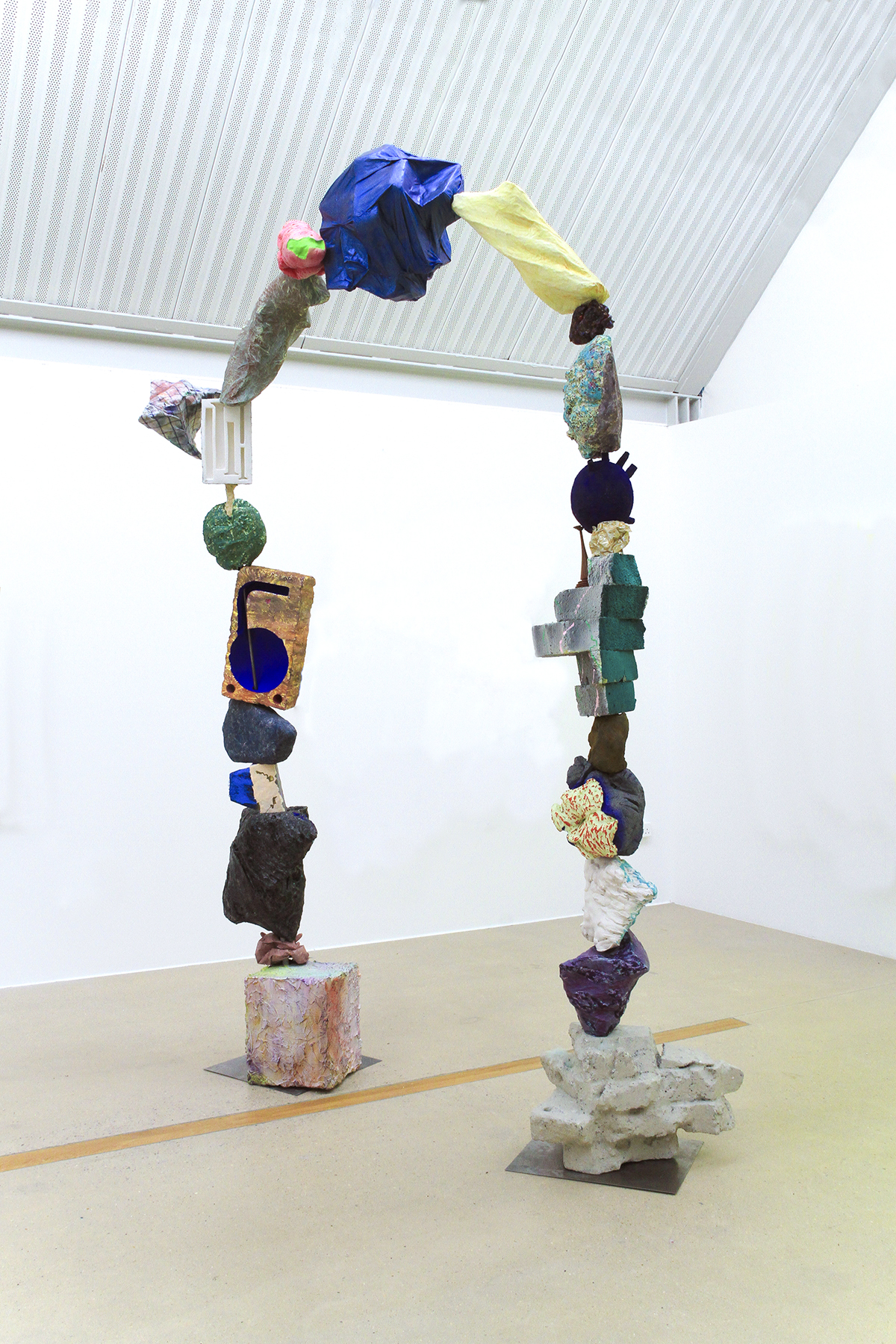 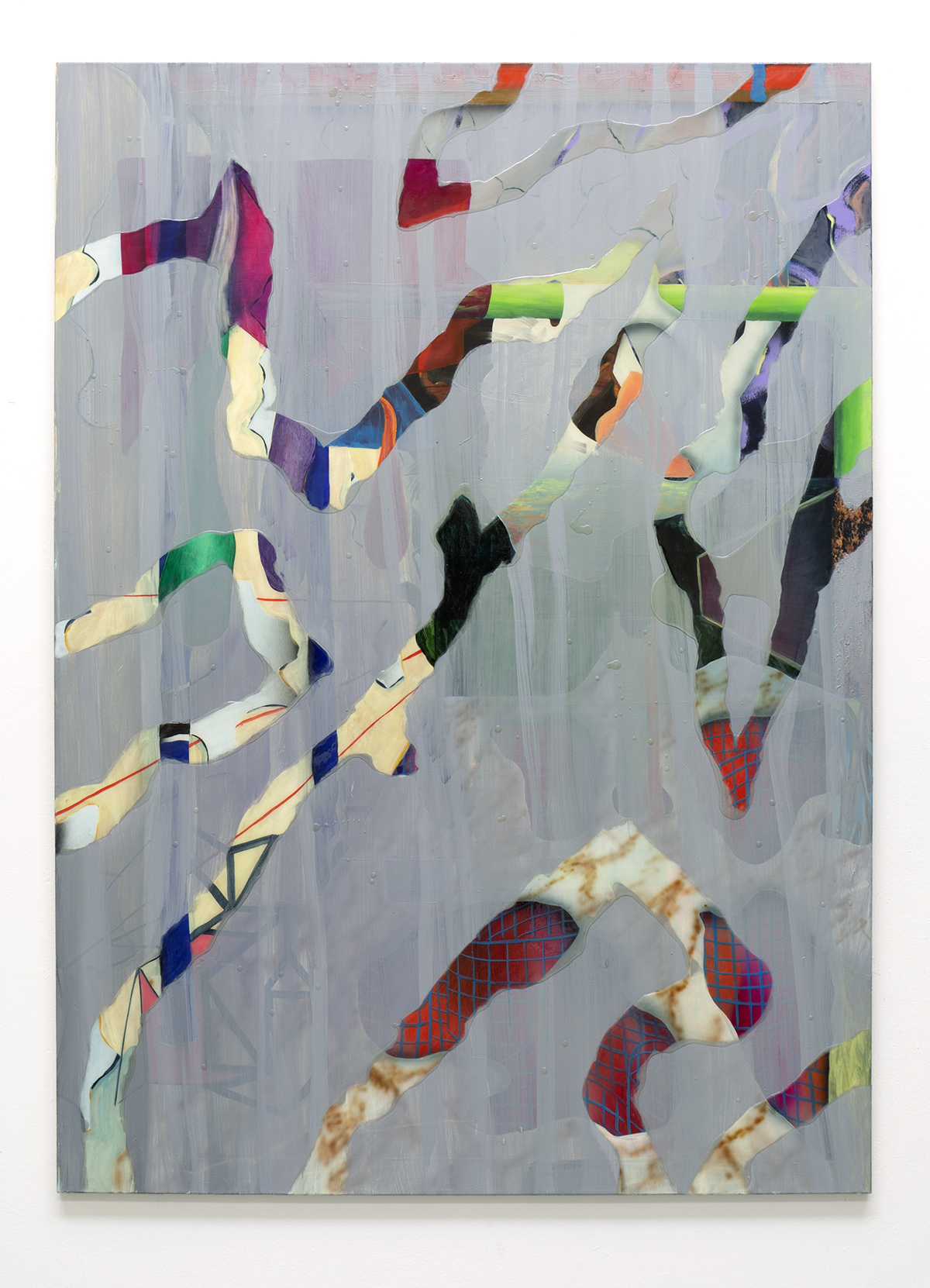 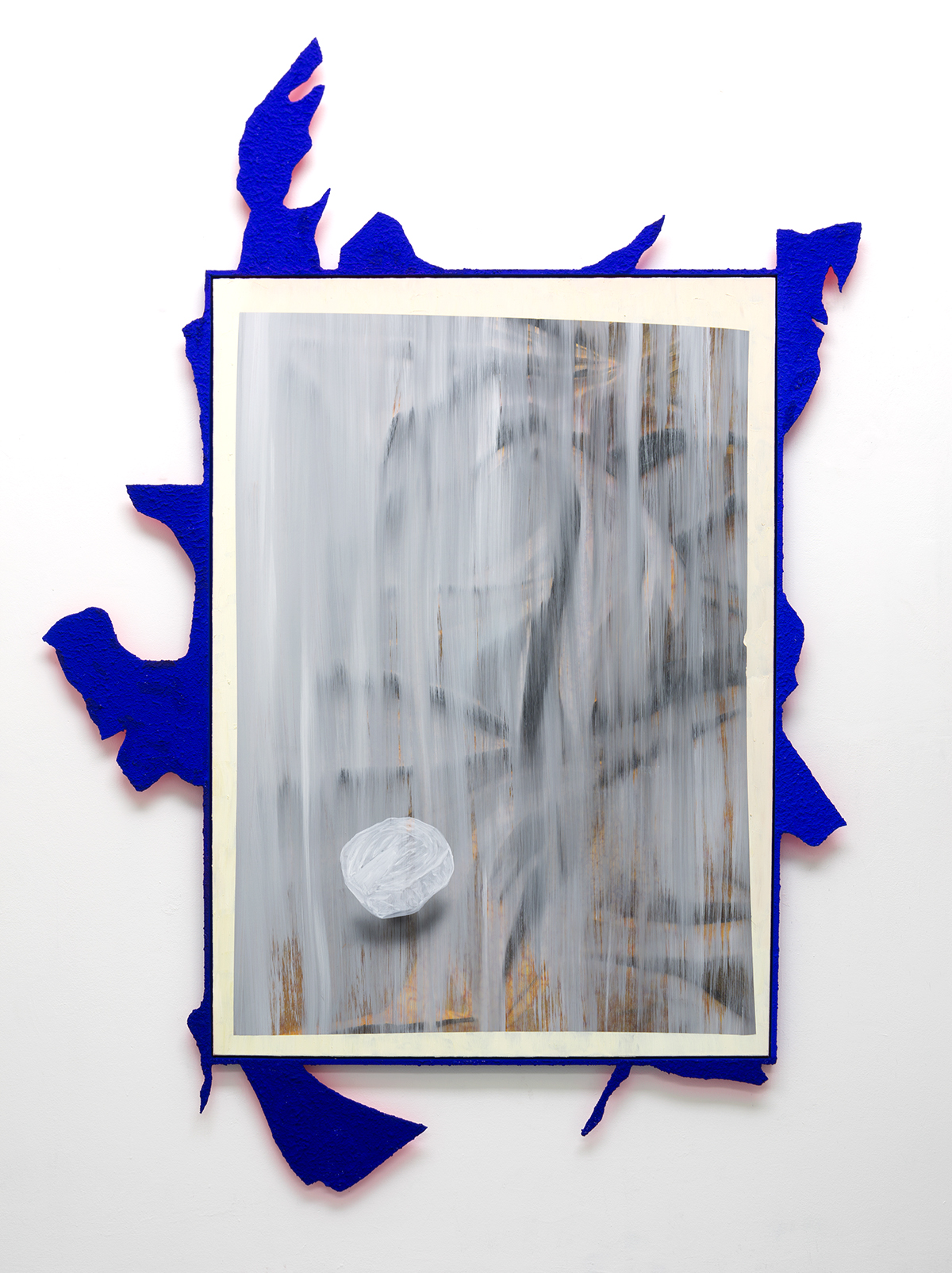 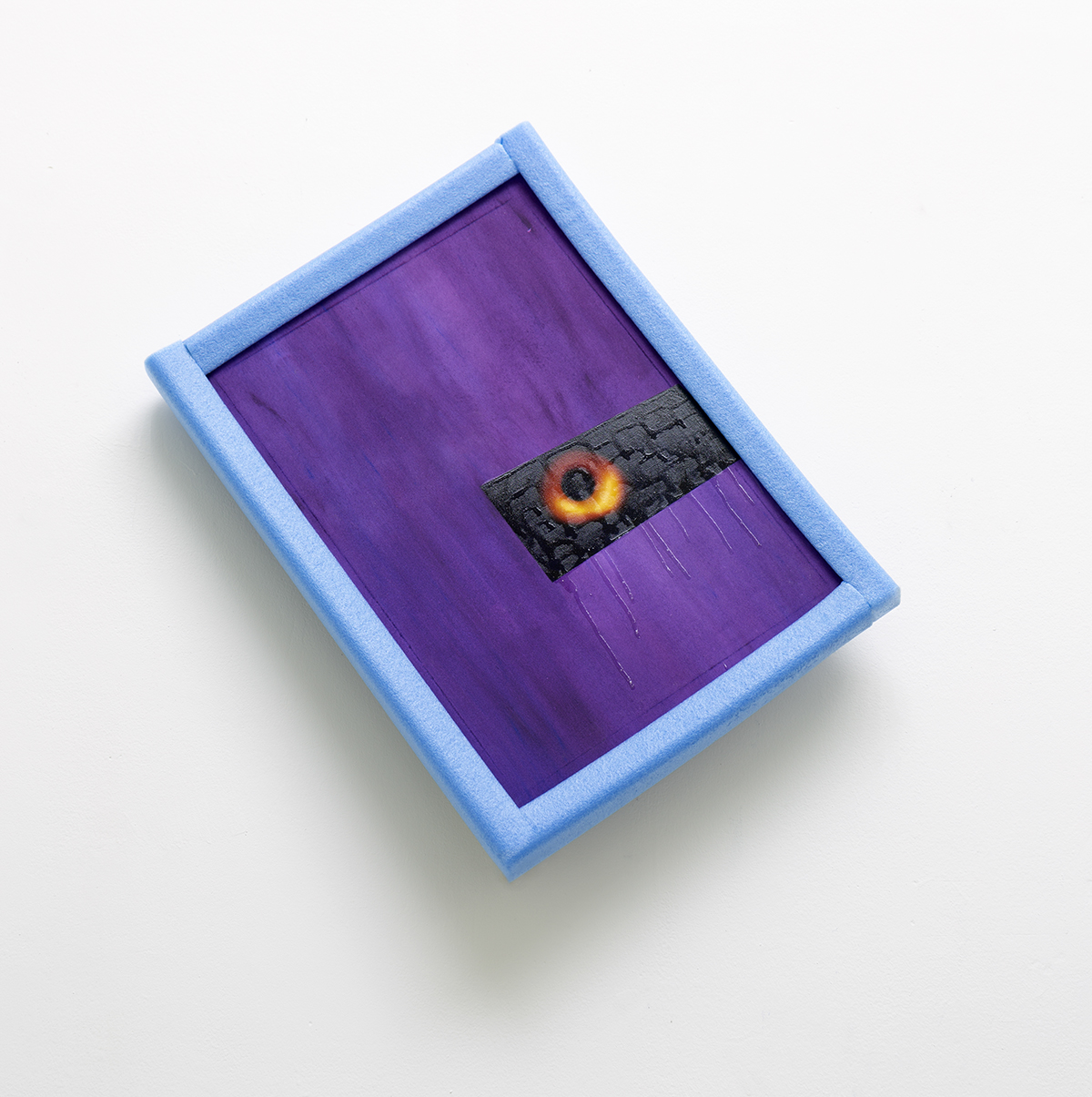 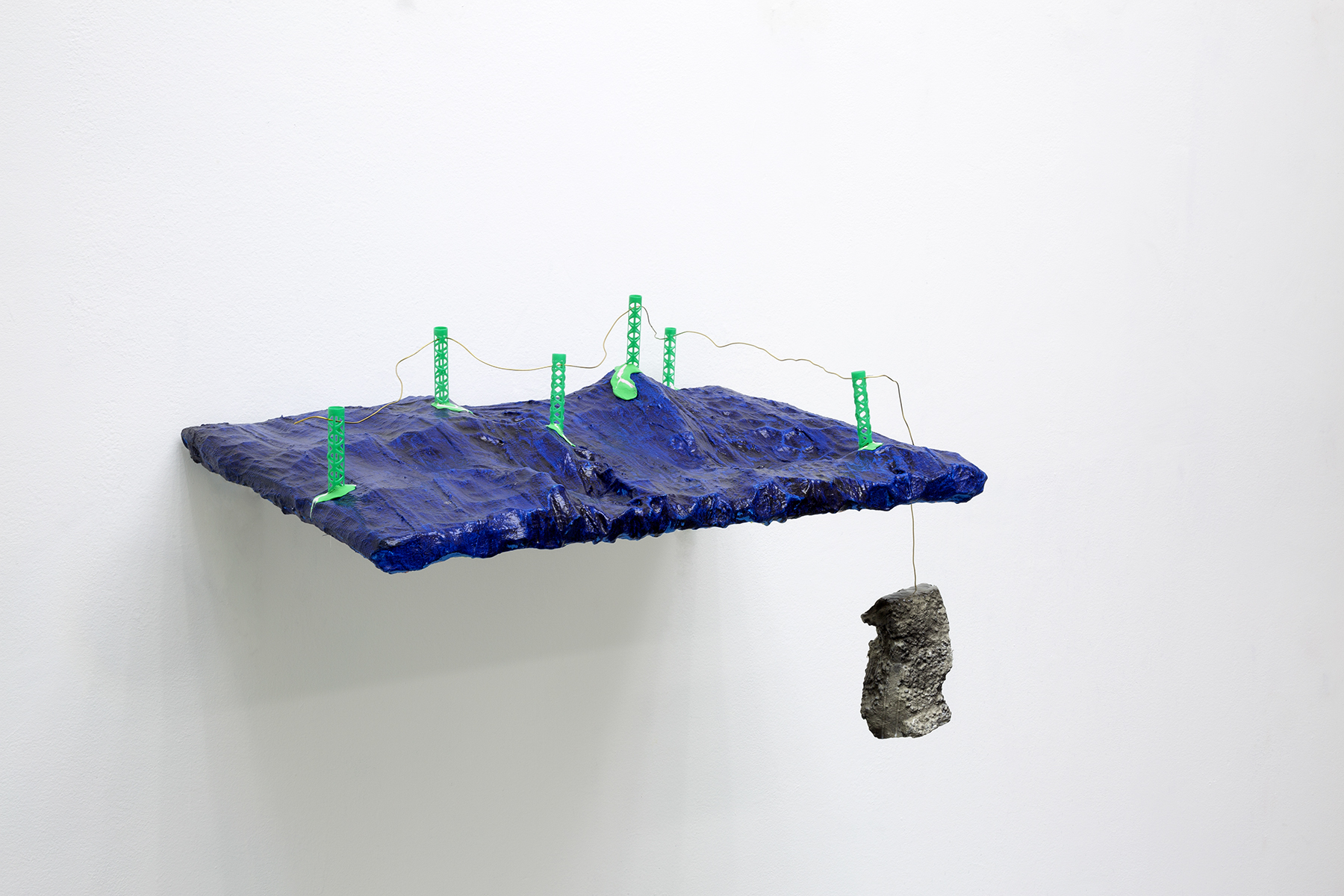 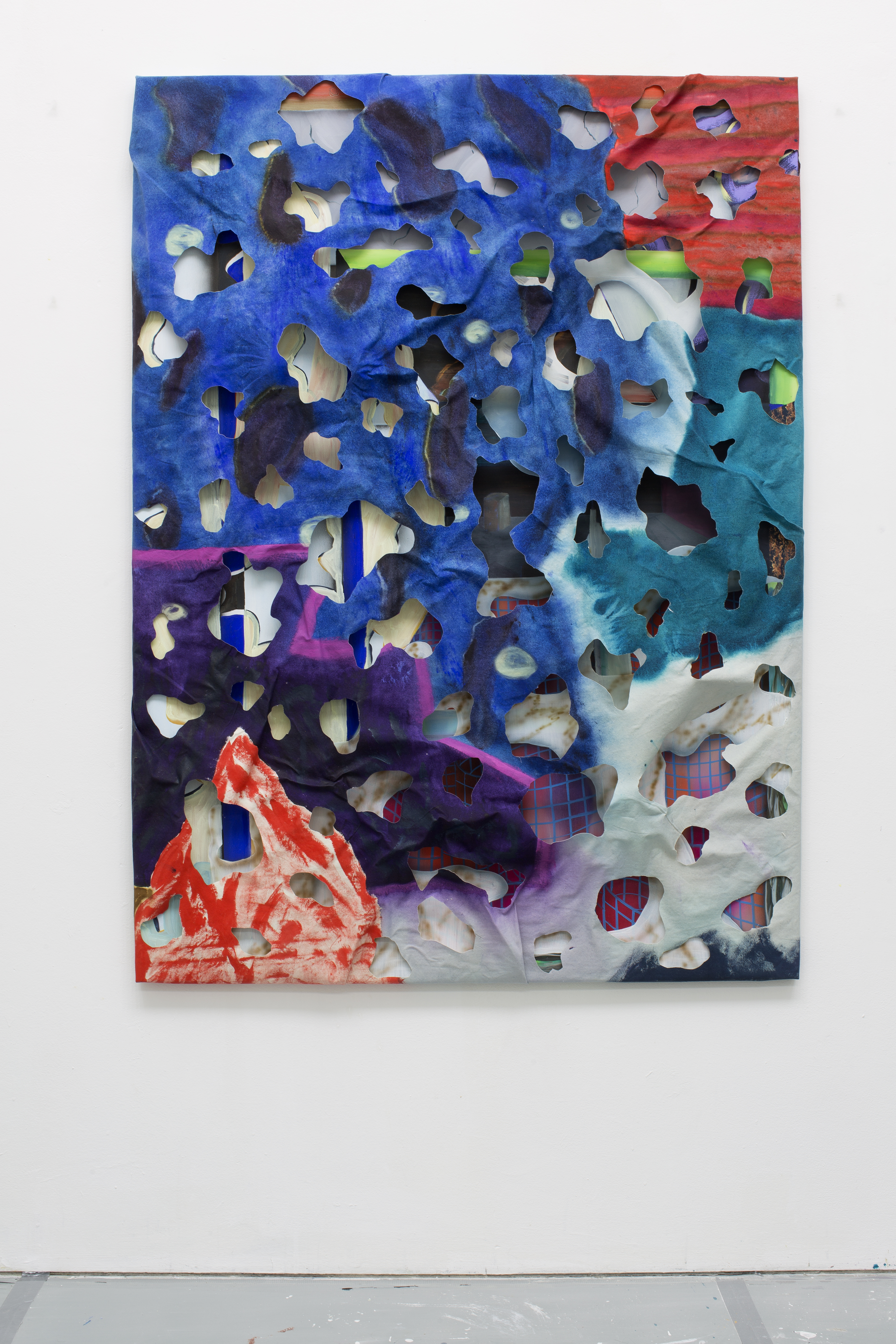 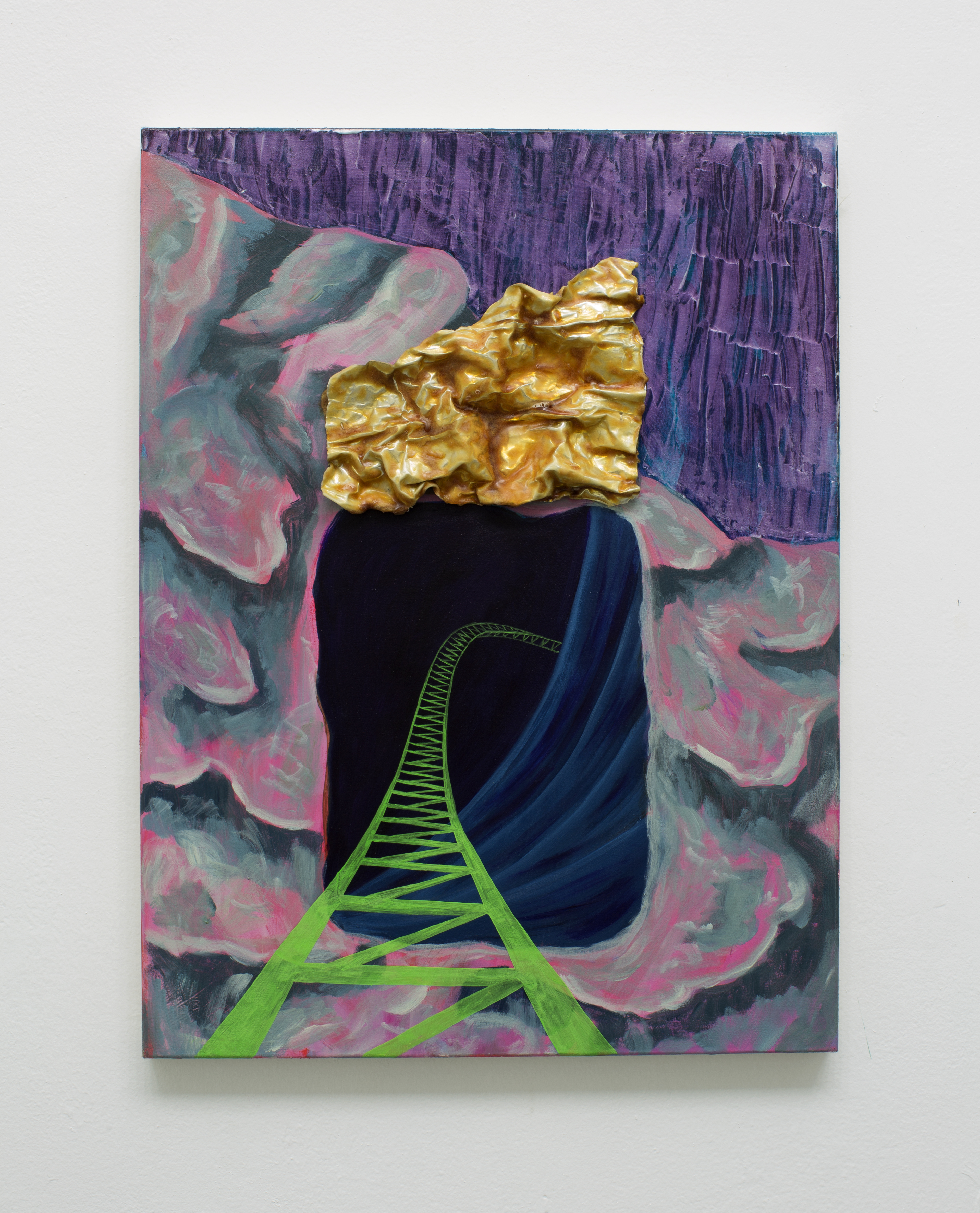 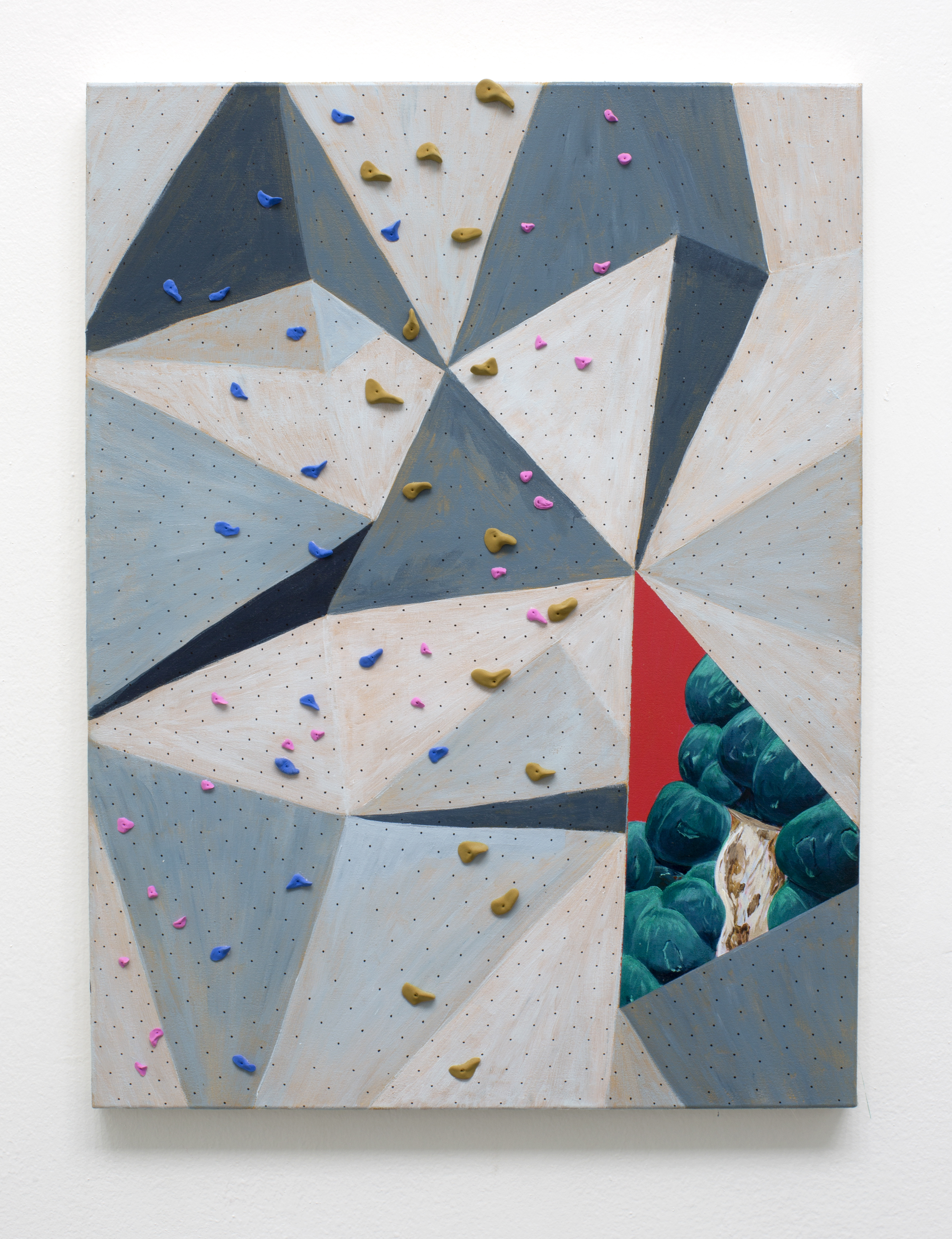 Sanne Maloe Slecht’s studio looks like a whirlwind has passed through it. Paint splatters everything, printed references are strewn about and artworks in every state of completion are scattered against every surface. But for Sanne, this is the optimal state in which to work – where she can flit easily between works, try something out, move on to the next. Sanne channels this chaotic studio world into her paintings, which explore the possibilities of visualising the unimaginable and play with materiality and the fabric of reality. Sanne plays with perception and creates visual riddles with the multiple planes and cut-outs in her work that dance invitingly between two and three dimensions. Working with paint, plaster and chicken wire, Sanne approaches her work as a process of literally “forming space”. Recently she has begun painting onto sculptural forms, which extend her interests in materiality. Her compositions, while primarily abstract and graphic, make glitchy allusion to familiar scenes and images. Silhouettes of palm trees, a train track leading into a tunnel, plant fronds; Sanne has a penchant for kitsch motifs, colours and references.

Originally from The Netherlands, Sanne received her BA at the Royal Academy of Art in The Hague. After eight years of self-professed “being a struggling artist”, she moved to London to pursue her MA, and is now about to complete her degree in Painting at the Royal College of Art. We caught up with Sanne ahead of her graduate show to hear about her recent residency in Germany, her interests in materialism, metaphysics, and more. 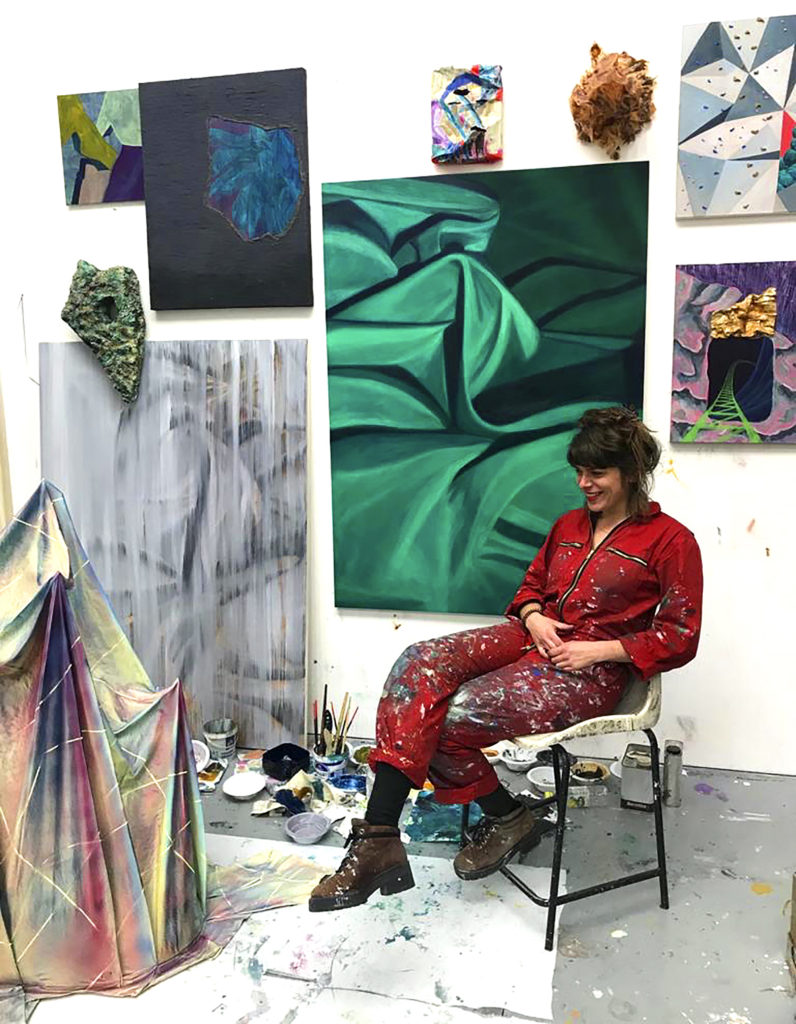 AMM: Hi Sanne! We read that you studied photography before picking up painting. What originally drew you to painting, and what keeps you hooked?

SML: I was never a ‘traditional photographer’. In my more photographic based works, I worked a lot with collage, made scans of painted surfaces, layering found footage, paint over photos and making installations or still lifes that I would photograph as a work. I was all about stretching the medium to such an extent that it gotten stretched into painting. The ‘getting dirty’ part was giving me energy and in many ways, paint felt like a more flexible medium than Photoshop. I like the physicality of paint and layered surfaces, which makes it more of an object than an image existing on a computer. 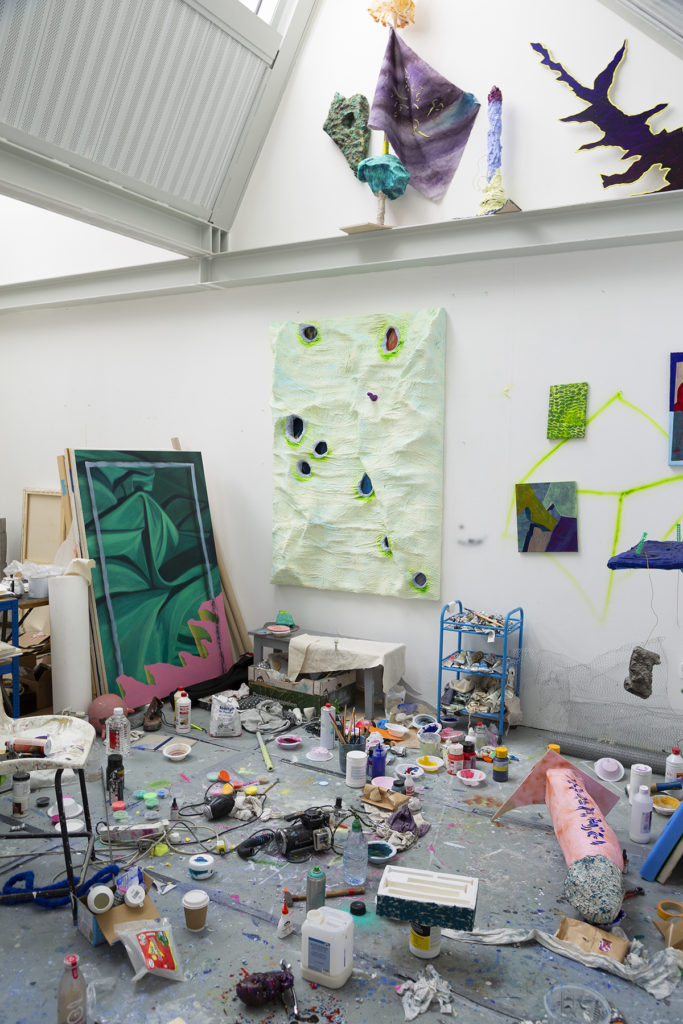 AMM: Are you currently on residency in Germany? How’s that going? Has the change of location had an influence on your work?

SML: I actually just got back from doing an exchange with Kunstakademie Düsseldorf. Being a month away from getting my MA Painting at the Royal College of Art, I figured this is probably the last opportunity that I could experience an exchange. Germany has always been the place I escape to (how exotic I know) and it was definitely good to get out of the pressure cooker for a bit. Stepping into the Kunstakademie is like entering your dream art-school: gorgeous building, rooms with ceilings for days, pub in the basement and a very high level of produced art. Honestly, I was very proud to walk around there. Next to that, the art scene of Düsseldorf is massive for such a small city, which provided for a lot of input. Getting into a new environment always takes some readjustment, but in the end it’s totally worth it for me. I think the period was too short for any massive changes, but it was refreshing to meet new people, hear different questions and see how a different market functions.

AMM: What role does humour play in your work?

SML: For me, the most humorous part lies in the making process. Things are really happening when I start to giggle about the weird stuff I’m doing. Whether it’s scalpelling my way through a perfectly stretched canvas, claying a massive alien dick or deciding I have to cover up a painting with a thick grey layer: this is what I find funny. I think the role of playfulness is therefore bigger in the final pieces than the humorous intention.

AMM: What comes first – the artwork or the title? Please tell us more about the irreverent titles you give your work.

SML: They kind of come simultaneously. I have a note file on my phone in which I write down parts of lyrics, things my drunk friends say, sentences from books and parts from the fiction I write all through each other. When I consider a painting finished, I look through my notes and find the best fitting title. I like it when the title is connected to the work, without being too straightforward. It’s quite intuitive, really. 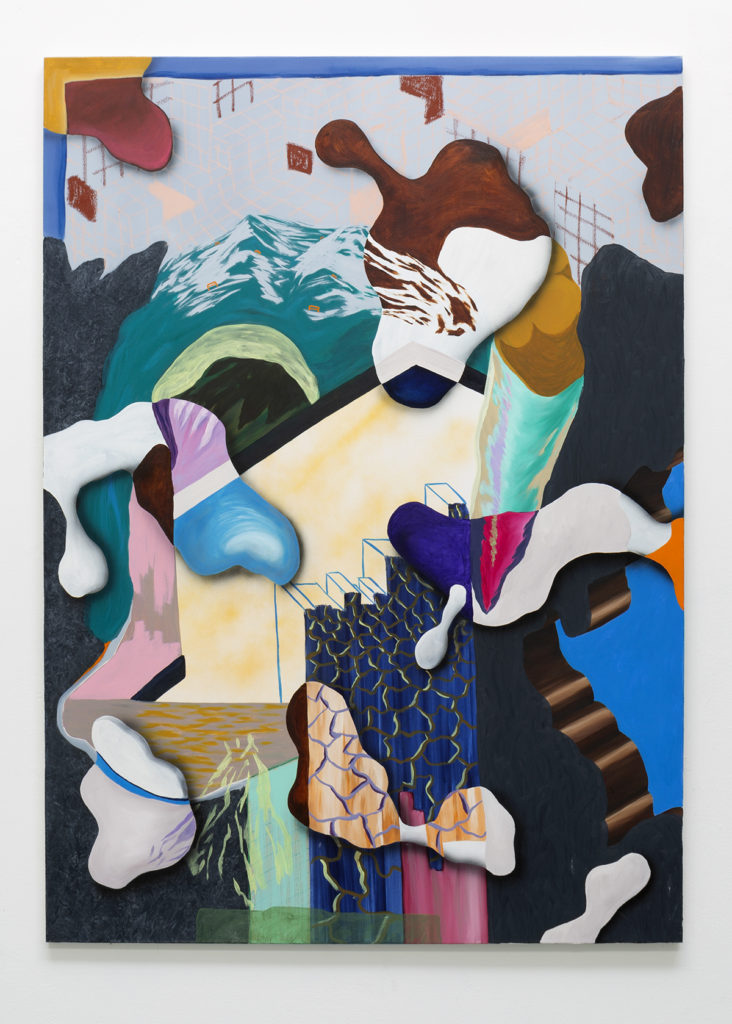 AMM: While your work is based in painting, your compositions are quite sculptural. Please tell us about your interest in surface, texture and form and how these fit in or break from the framework of painting.

SML: Each of my compositions has a stage like quality, where acid colours run an antagonistic show, only paused to admit shapeless cutouts. Gaps shot into reality – inviting the eye to lust after its surface – and where the viewer can crawl through to solve the visual riddle. A way to do this is to navigate through the notion of space, in painted forms or literal three-dimensionality. I form space by stretching multi-layered canvasses and then create cut-outs on the top layer. I screw canvasses on top of each other, paste on three-dimensional shapes and work with the language, thickness, gloss, and structure of paint itself. This materialisation and flattening of natural colours, textures, and surfaces create a complex structure that is reminiscent of a painting, or a depicted space, but can also exist in other dimensions. Lately I’ve found myself also painting on three-dimensional objects, in such a way that both mediums completely overlap.

AMM: Some of your paintings are reminiscent of low-fi internet aesthetic. Is this intentional? In what ways are you influenced by sub-genres and popular culture?

SML: I remember being online for the first time very well. I was twelve, and before that I was always playing outside with my brothers. This new environment became very much my own and I started to nerd out with it, making websites, collecting found images, playing around with WordArt. Next to that, RollerCoaster Tycoon 2 was and always will be my favourite computer game, and a lot of my love for rearranging space comes from being lost in that very game I think. More general, my work is greatly reminiscent of patterns, colours, aesthetics and motives that were close to me in my childhood in the 90s and early 00s.

AMM: Your paintings often include doorways or openings that seem to lead to other dimensions. What is beyond the threshold?

SML: These portals for me have exactly that function. What lays behind it is a mixture between familiar motives from our reality and a saturated hyperreality. To reach a point of visualizing the unthinkable, I feel like there is a path guiding you there. Next to that, I’m very interested in producing a stage, or set, with props that help imagining this new landscape.

AMM: What is your process of working and researching?

SML: I’m a hot mess in general. My studio changes every week dramatically. I’m easily distracted and tempted by a new idea or material. I work on everything at once, and sometimes have trouble finishing things off and put them to one side. I think for most people it’s quite overwhelming to walk into my space.
The research also fits into that rhythm. I can start reading about something, put it to one side because I’m distracted by something I’m making, before picking it up again weeks later. The only real concentrated research period I’ve had lately was writing my dissertation ‘Play Doh’s Cave’. Ideas gained from that form the basis for my current practice. 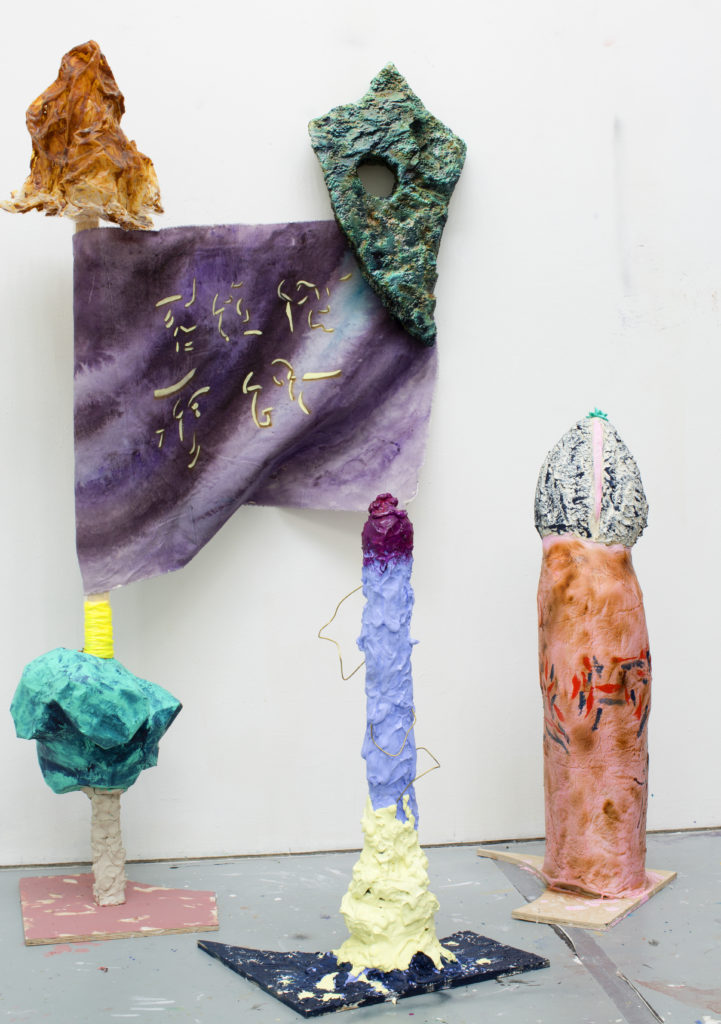 AMM: What ideas or themes are you currently exploring in your work?

SML: I think I’m mainly trying out new ways to rearrange space. About half a year ago, I decided to let go of resins, plastics and other contemporary materials to completely embrace the low-fi sci-fi qualities of my work. Currently I’m testing how I can combine very basic materials such as plaster, canvas and chicken wire to create something otherworldly. On a more philosophical level I’m researching ‘the fold’ as a metaphor for our current state.

AMM: What are you watching, listening to, reading right now?

SML: Generally speaking, I think I surround myself with a very eclectic mix of influences and interests. Two series I’ve really enjoyed watching were Rick and Morty and Black Mirror and my taste in movies is somewhere in the middle between Titanic, Star Wars and The Lobster. After writing my MA dissertation last year, I found a renewed interest in reading and books like Prodigals (Greg Jackson), Pastoralia (George Saunders), Modern Love (Constance Dejong) and Roadside Picnic (Arkady & Boris Strugatsky) were all influential in my stream of thought. At the moment I’m re-reading 1984 by George Orwell and am still amazed by his stellar futuristic foresight. The music I’m listening to is very dependent on my location or activity. I weirdly get in a very good artistic flow if I listen to music I’m overly familiar with, mostly very cheesy late nineties early noughties tunes. I have to cycle a lot in London which I prefer doing on Talking Heads or Happy Hardcore. At home I play a fair share of Youtube playlists, that mostly start out with The System or Connan Mockasin and go from there. A dear friend introduced me to Jenny Hval, which has definitely been my greatest discovery lately.

AMM: What keeps you awake at night?

SML: Surviving in London. I live temporarily and without running water, but with partying neighbours and an almost permanent fear of bedbugs crawling through the door. I work a lot in my studio and job and there is a permanent stream of ‘things-to-do’ running through my head. All of this is driven by a very big force of wanting to make art permanently, and hopefully I look back in a couple of years at this phase in my life and consider it very romantic, as something that hardened me and a period that made me realize that this is what I want to do, forever, no matter what.

AMM: Do you have any exciting projects coming up? What’s next for you?

I’m about to receive my MA in Painting from the Royal College of Art and the Degree Show is coming up from 29 June to 7 July 2019. It’s both daunting and exciting to show the works that have surrounded me in the studio for the first time to a big public. After the show I plan to stick around in London and work more in my studio and my job as a frame technician. I was invited to do a show in The Netherlands in September that I need to prepare for and there is an Artist in Residency in Essen (Germany) coming up at the end of this year.

Find out more about the artist: www.sannemaloe.nl 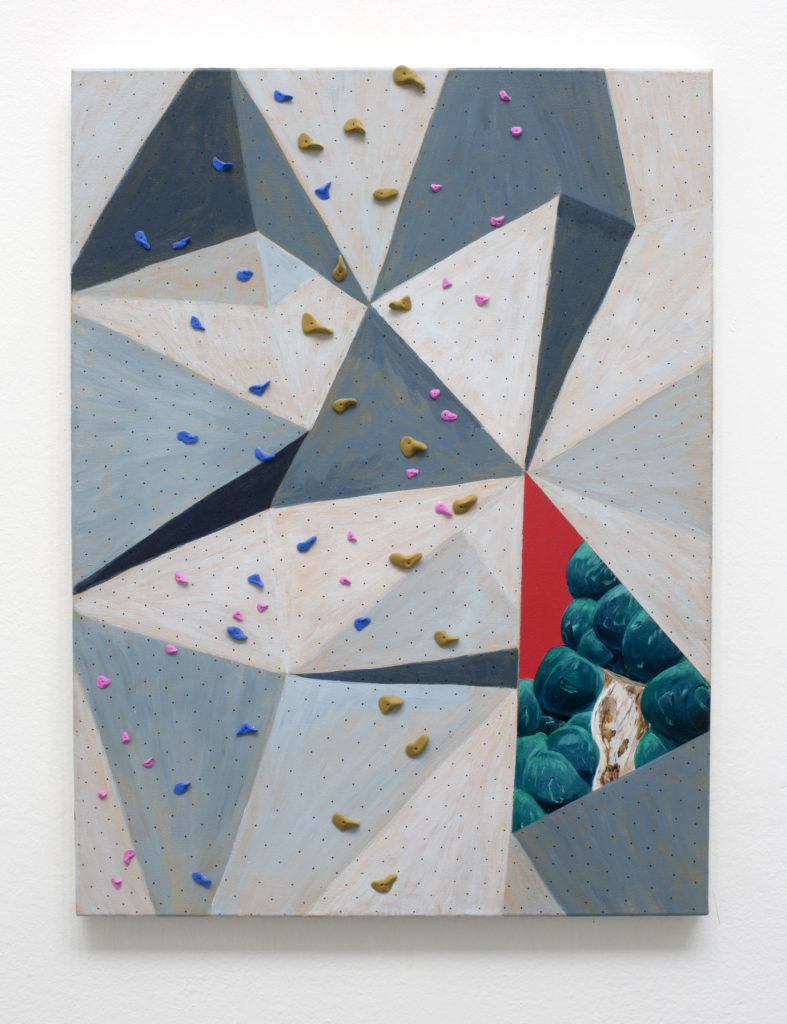