Beasts and boxers: In conversation with Vojtěch Kovařik 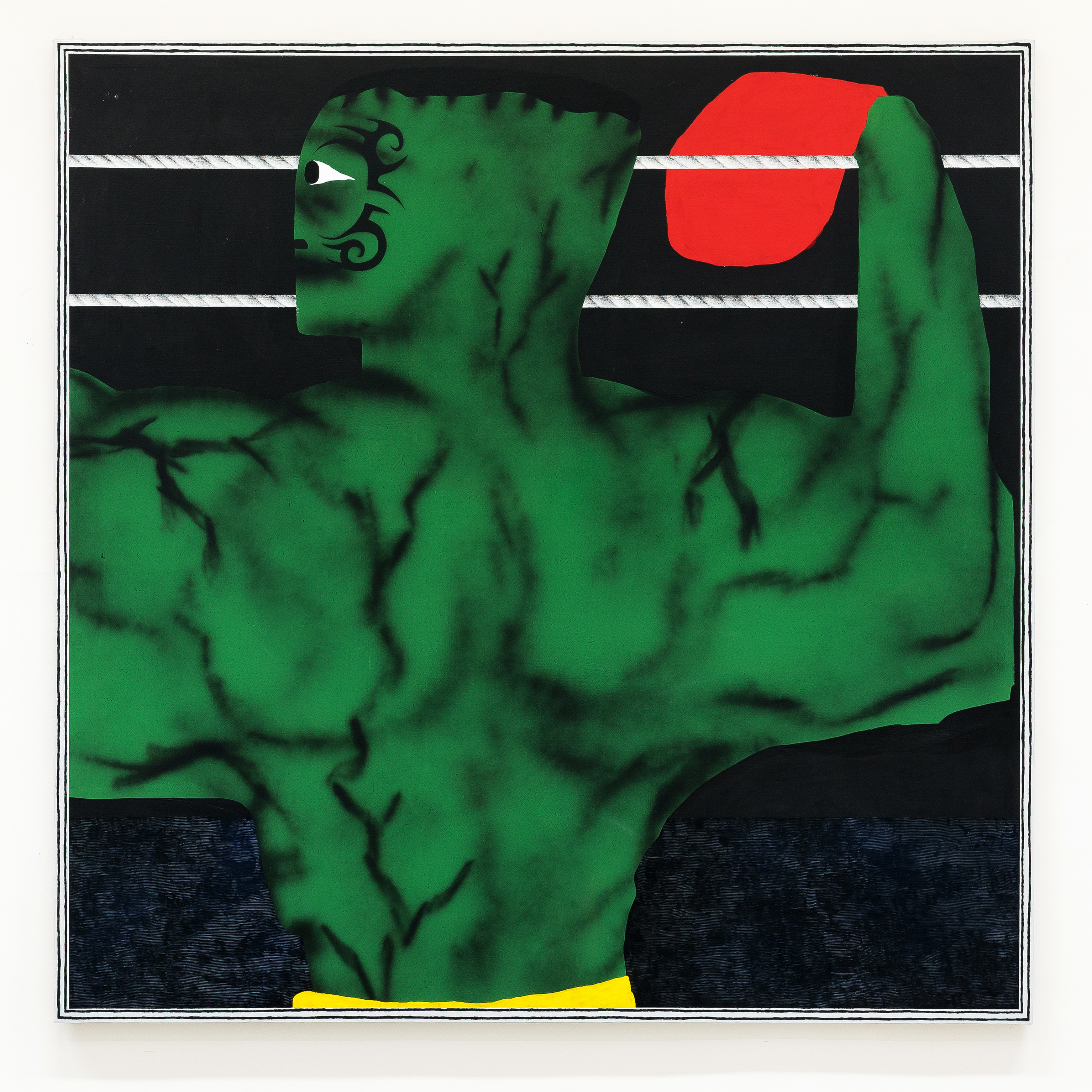 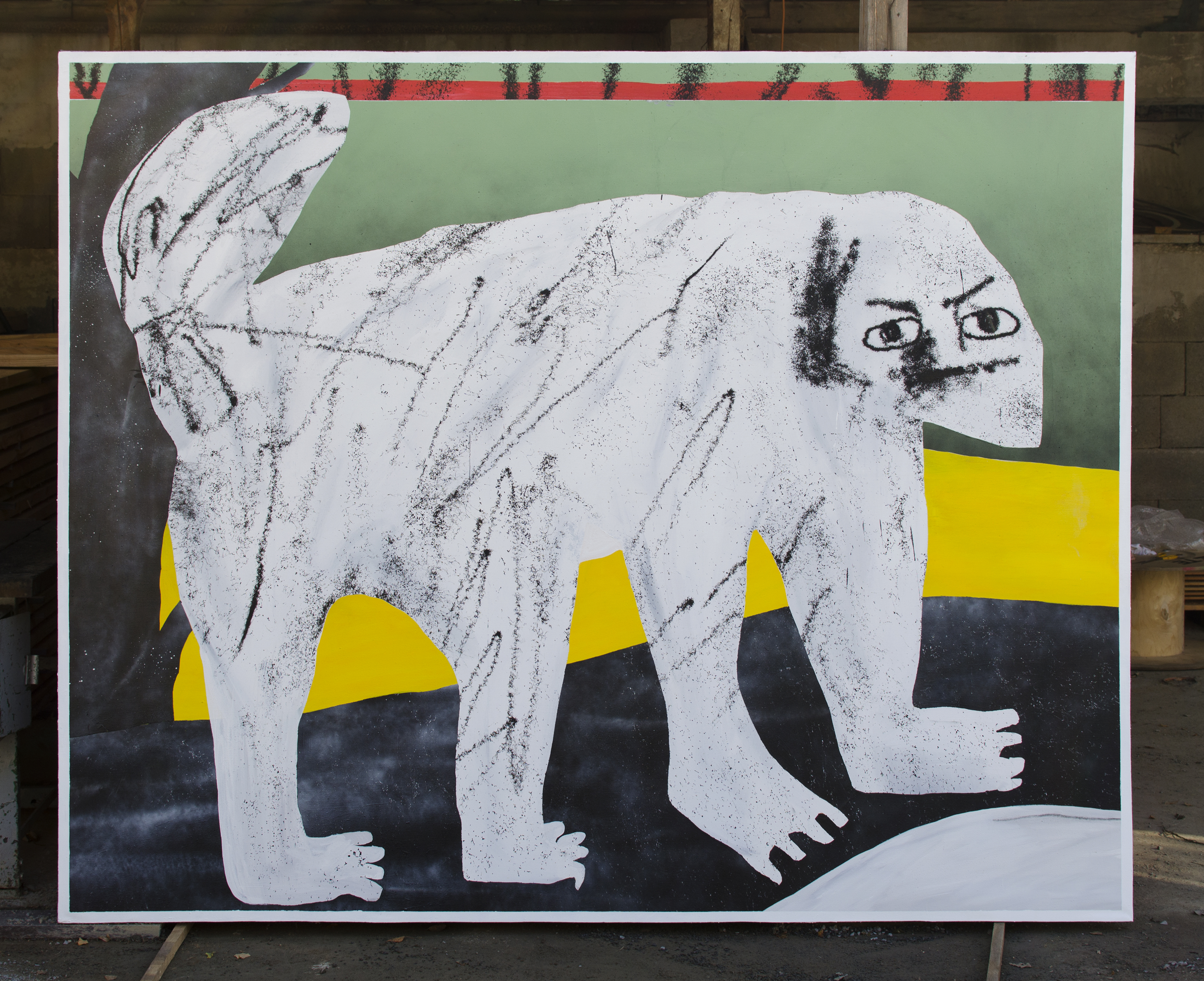 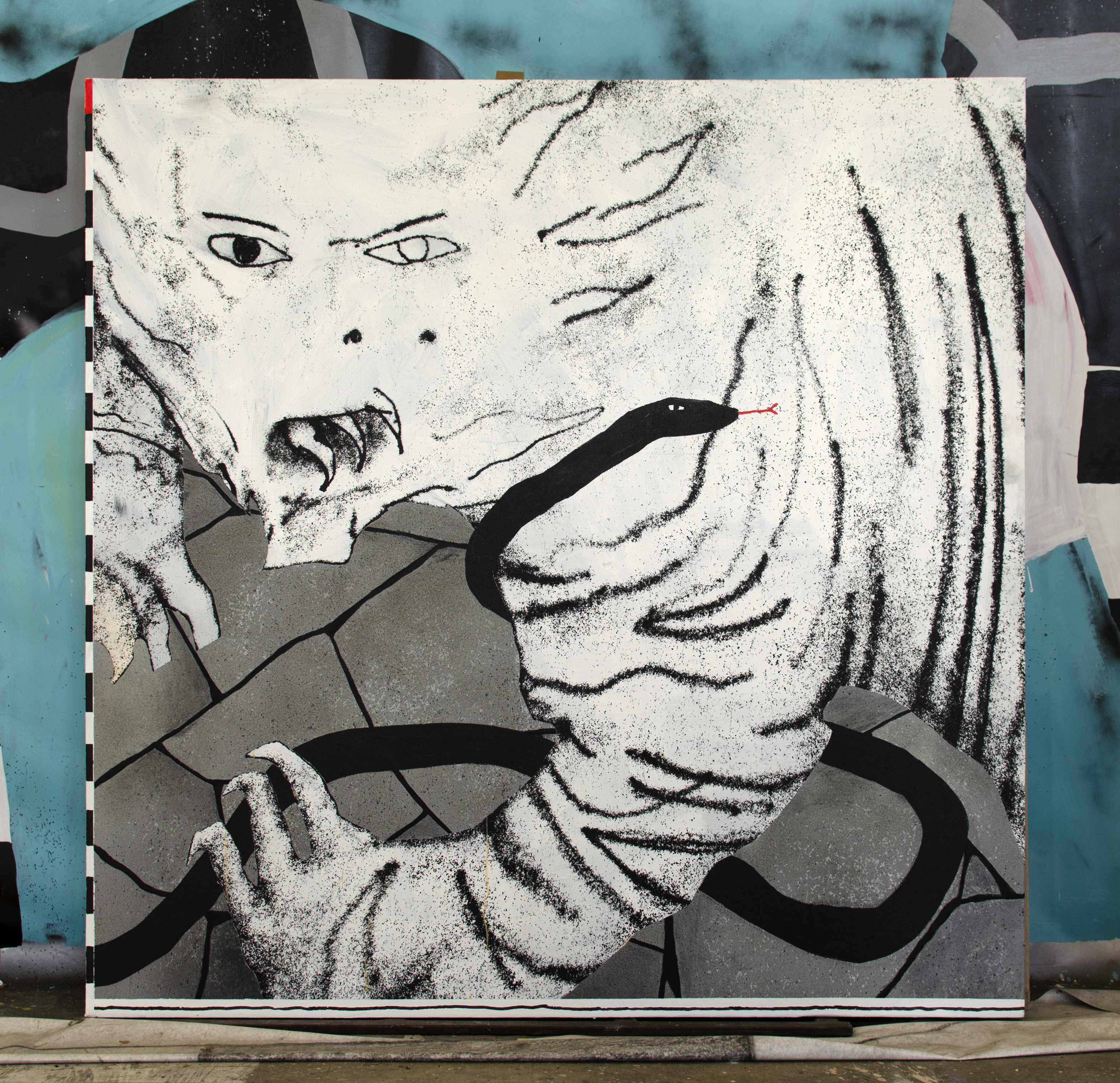 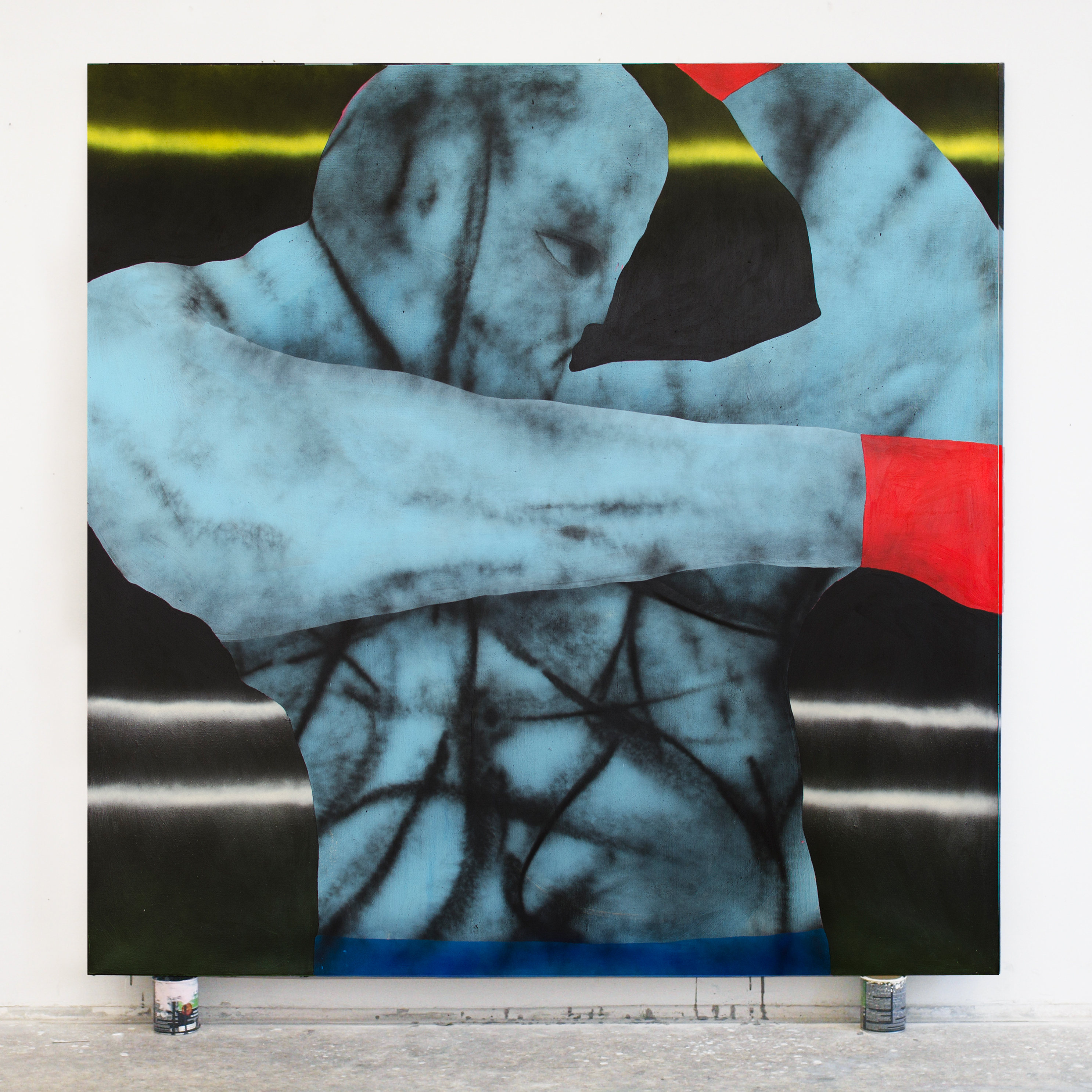 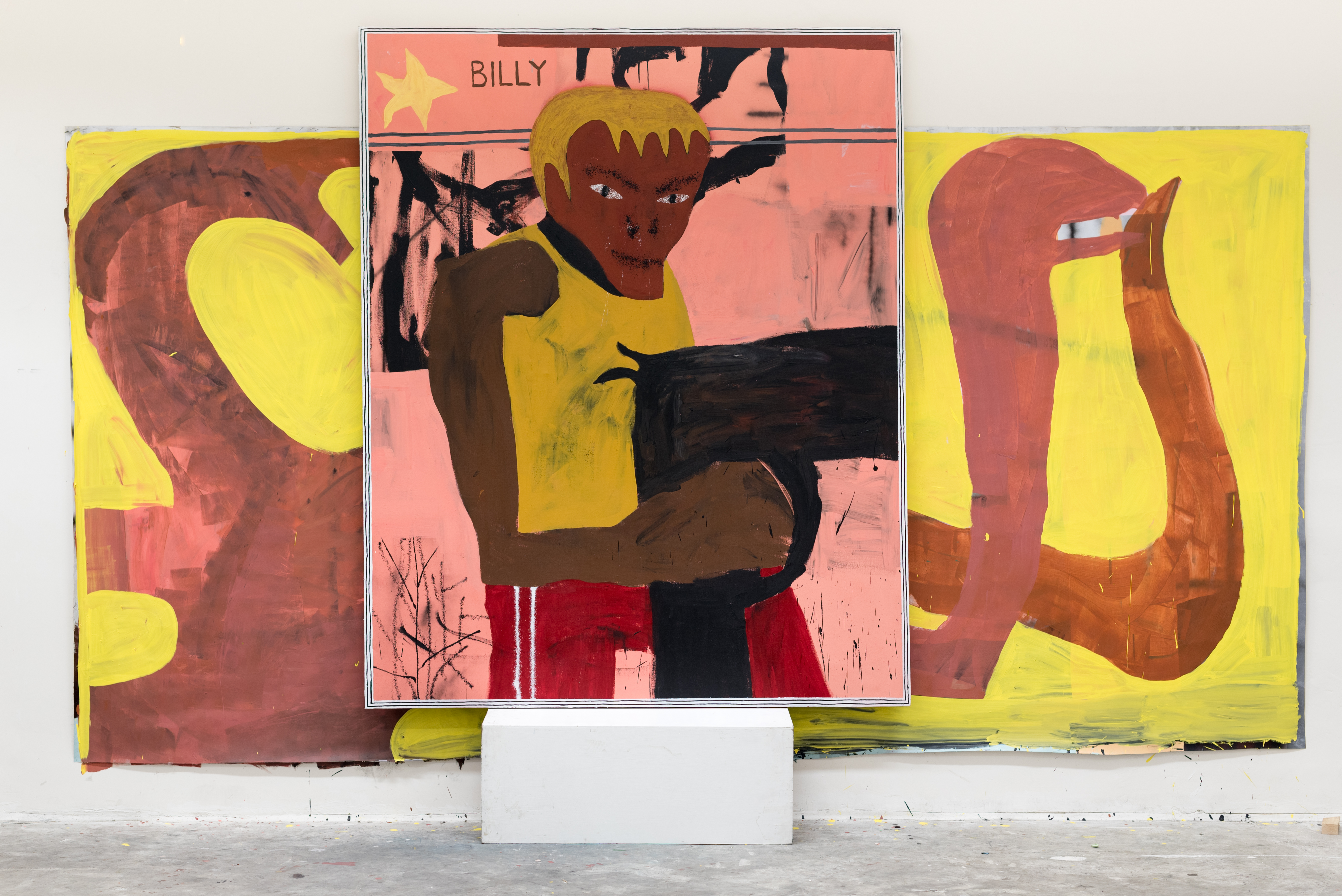 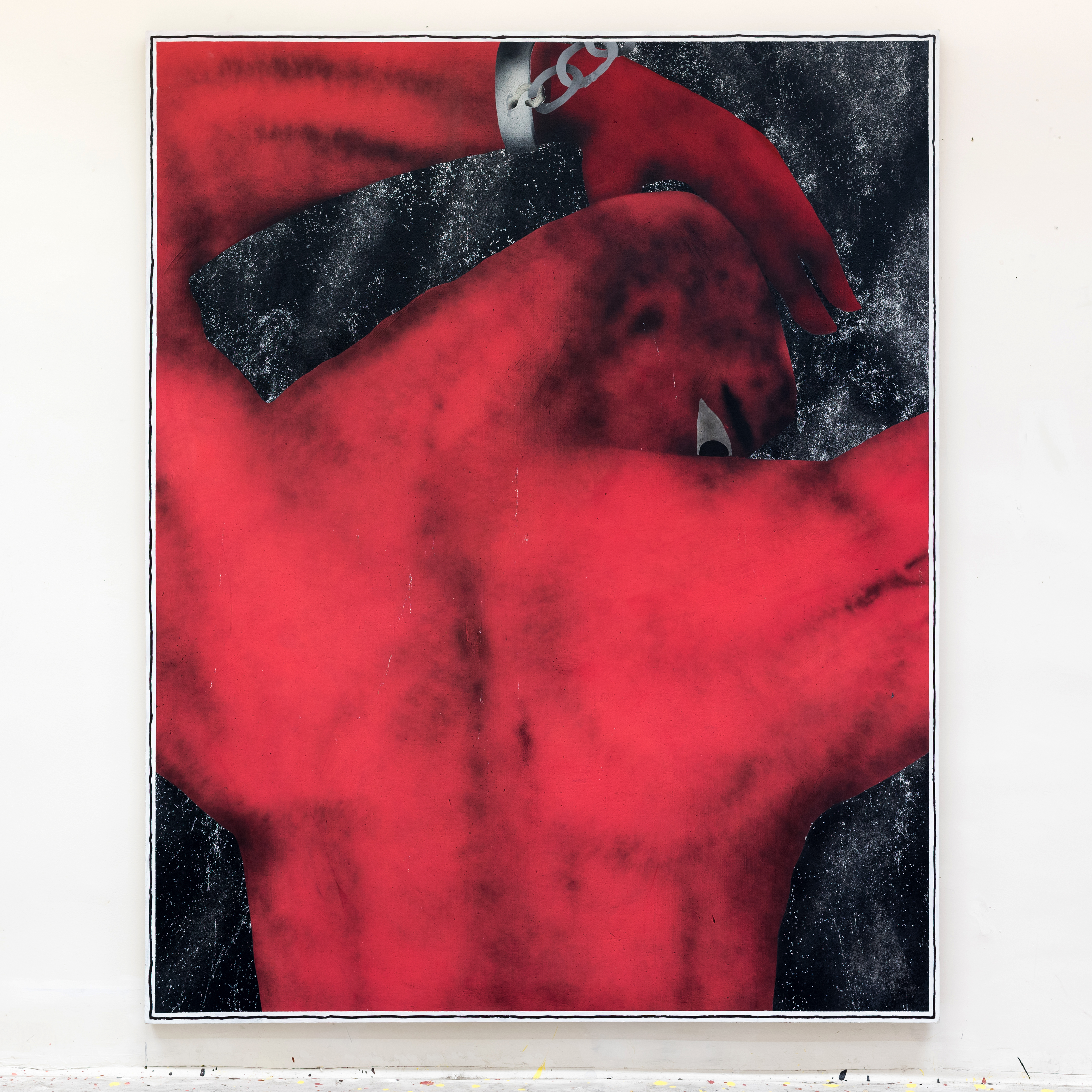 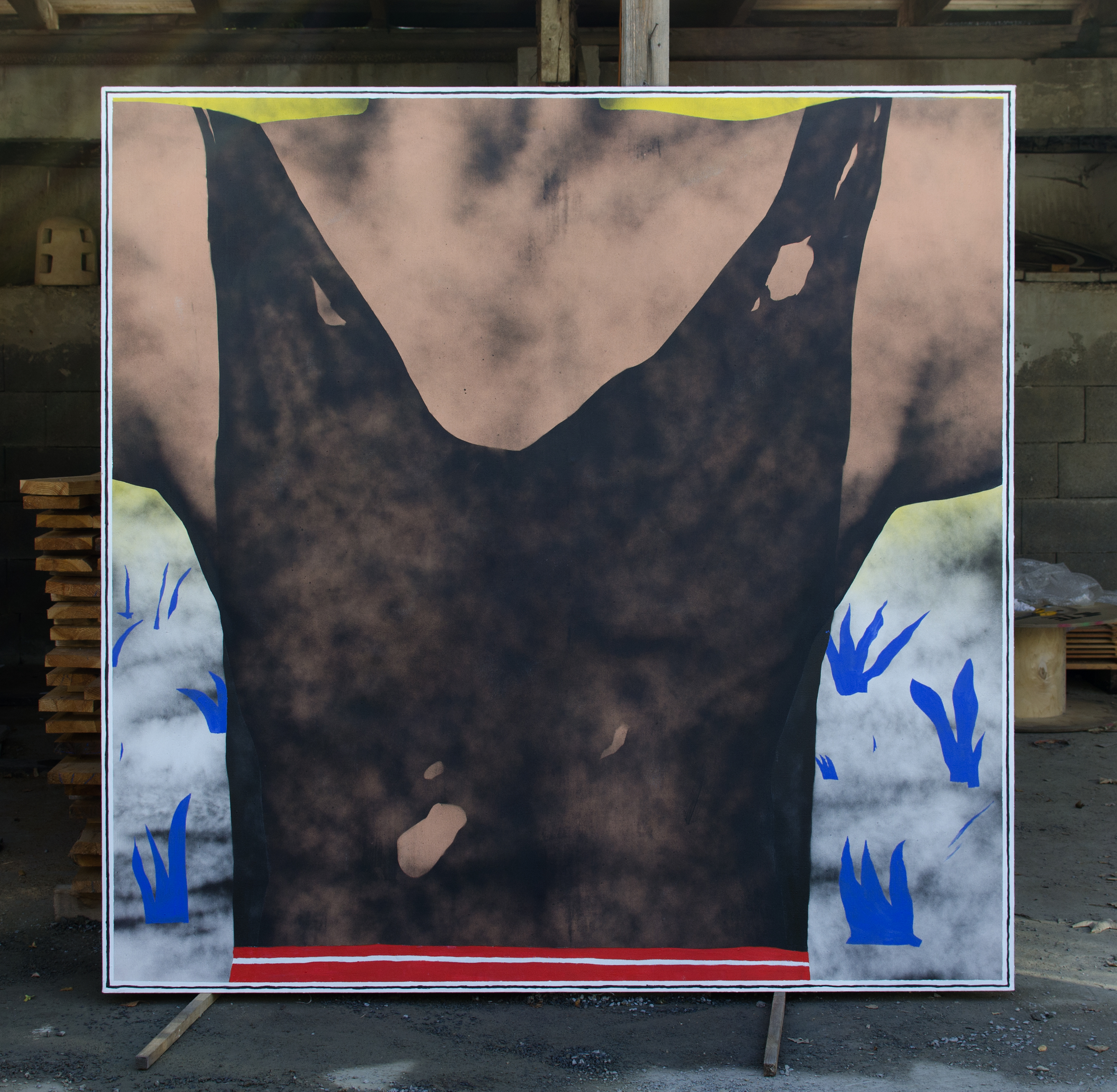 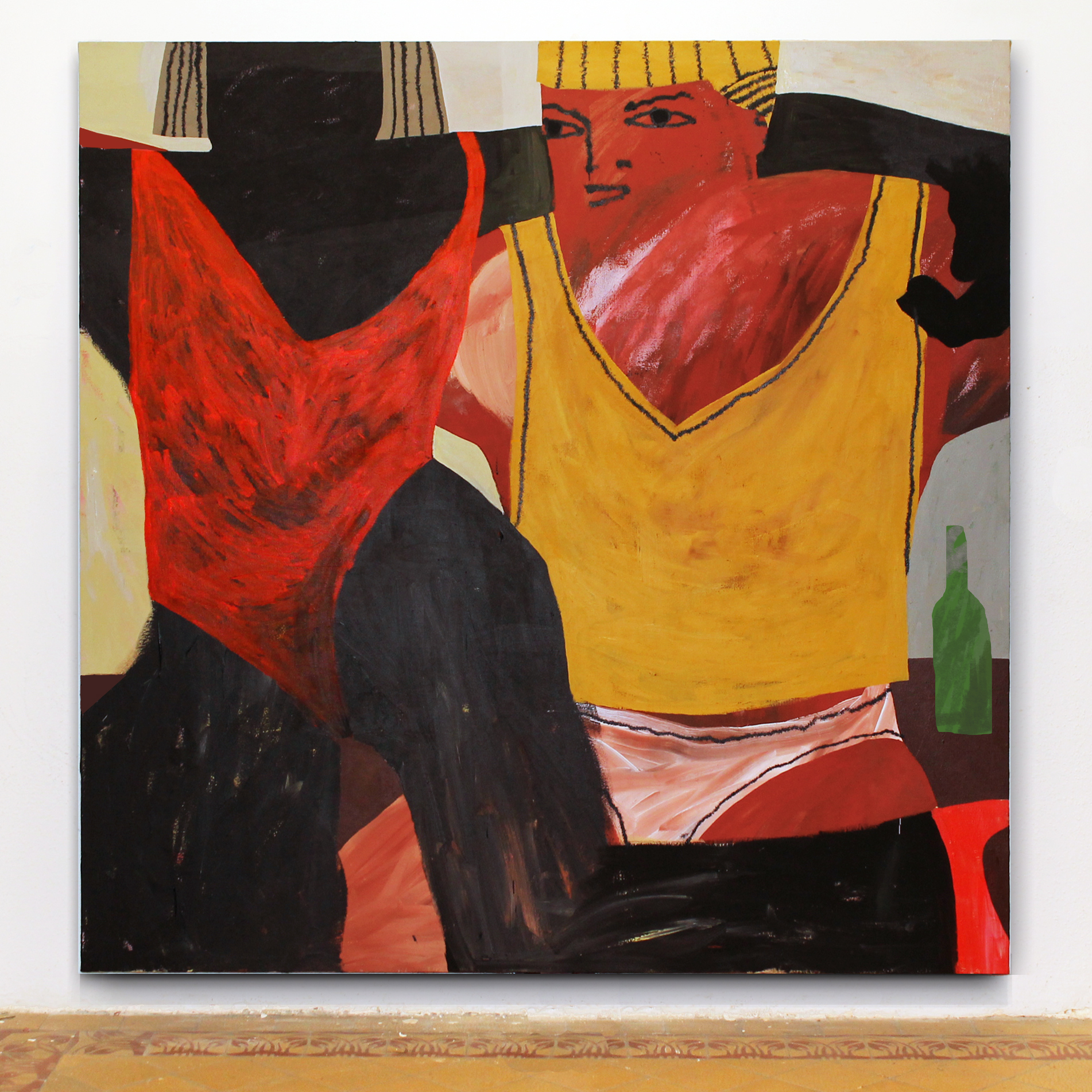 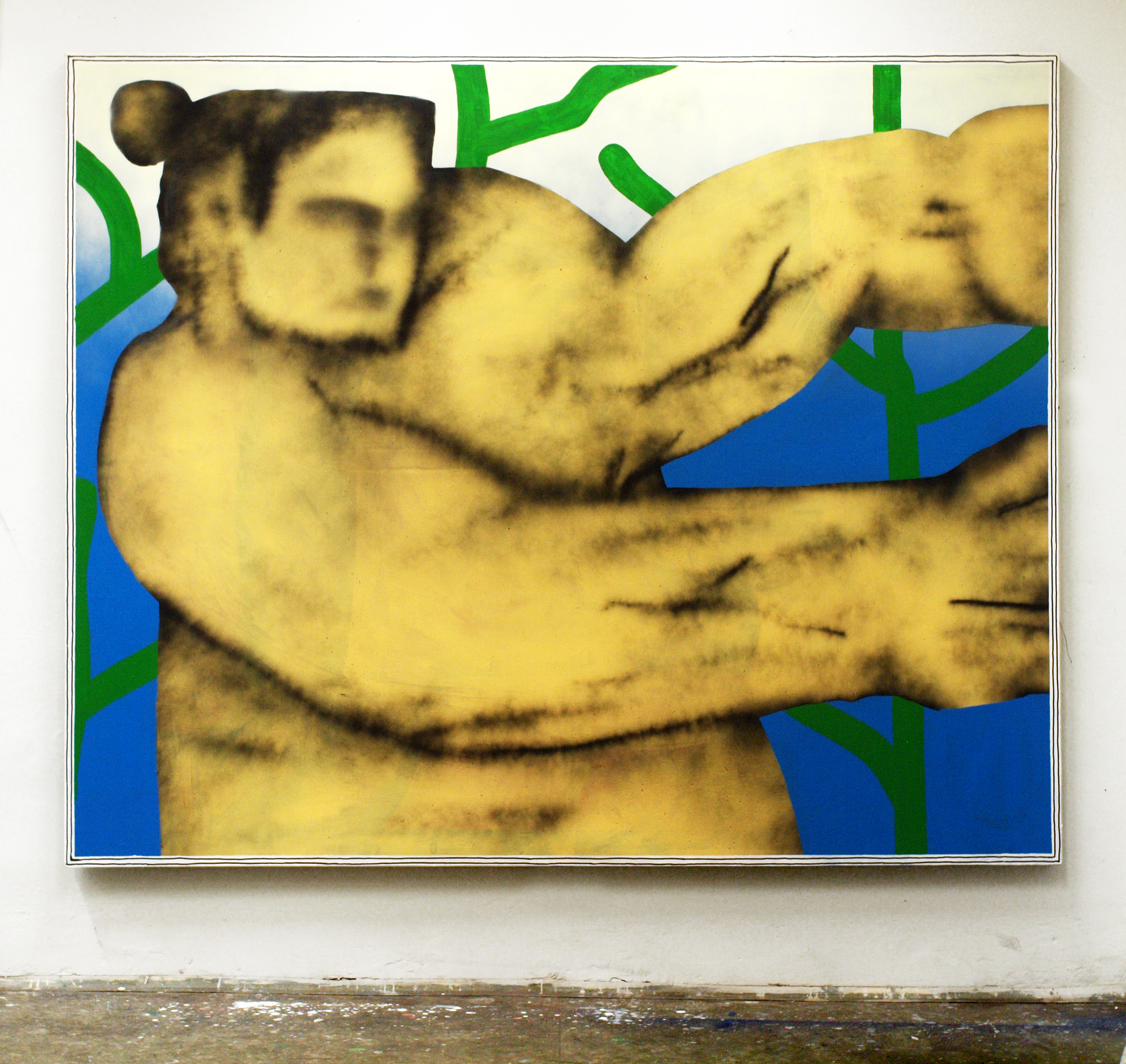 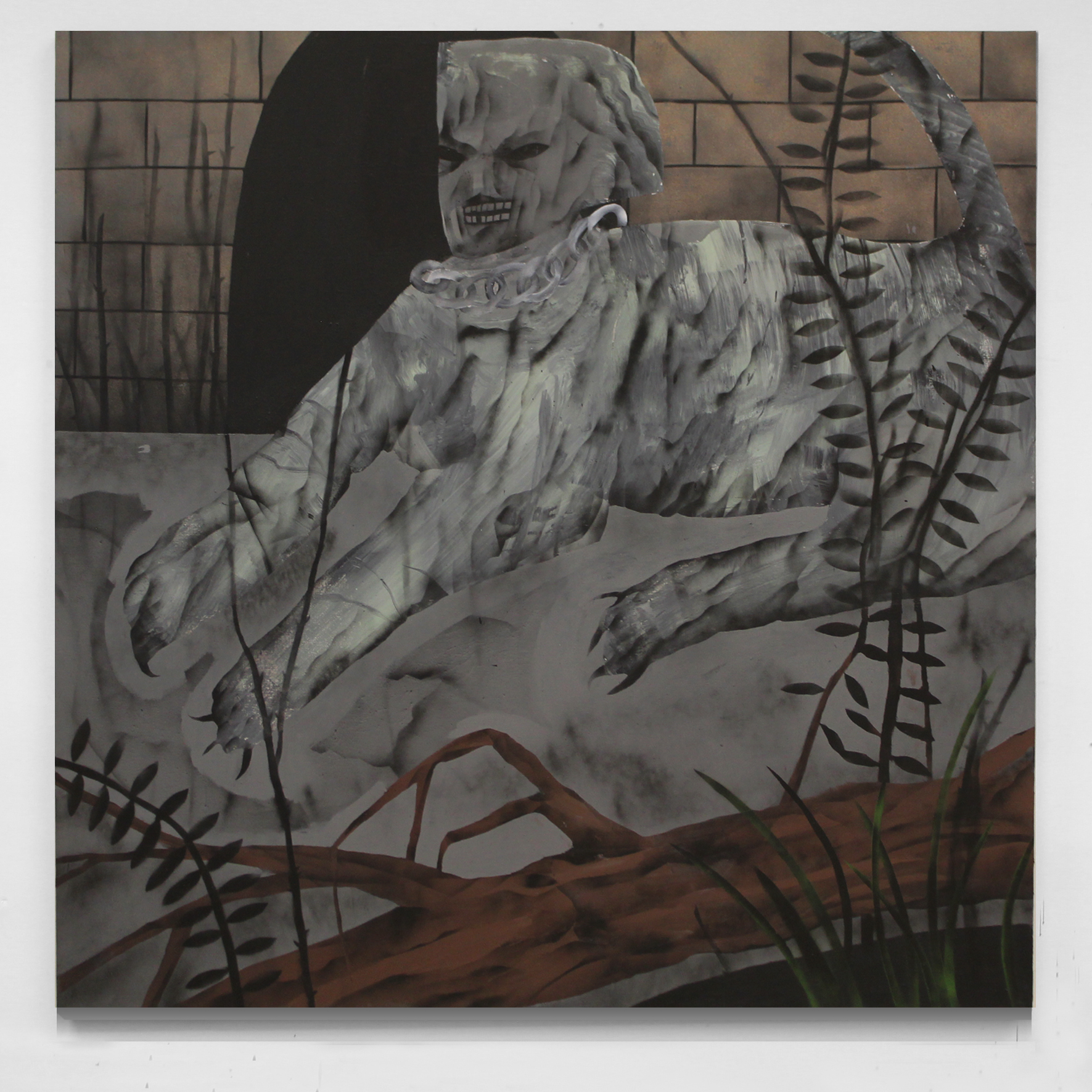 Hulk-like muscle men are a main feature in Czech artist Vojtěch Kovařik’s work. Working on huge canvases, Vojtěch’s larger-than-life figures are depicted locked in combat and seem to strain against the edges of the composition while they tussle against each other. Their veined flesh and bulging bodies, painted in shades of emotive colours stand out against the flat colours or patterns of the background. Vojtěch uses a technique of spray paint and acrylic to achieve the mottled skin tones and textures that characterise his work. For him, the body and great slabs of flesh and muscle offer infinite artistic interest, whereas the face, limbs and all other features of his figures are rendered in a brusque stylised shorthand. The contrast between these styles creates a brutal naivety, and an unlikely charm and sense of playfulness. The tone of his work sways ambiguously between violence and silliness. These giant men, flagrantly flaunting their masculinity, are in fact caricatures, ridiculous, objects of curiosity. Figures from Greek mythology and imagined and real animals also appear in Vojtěch’s paintings as well as pop culture references. We chat to the artist to find out more about recent residencies, his fascination with bodies and what the art scene is like in Ostrava in the Czech Republic. 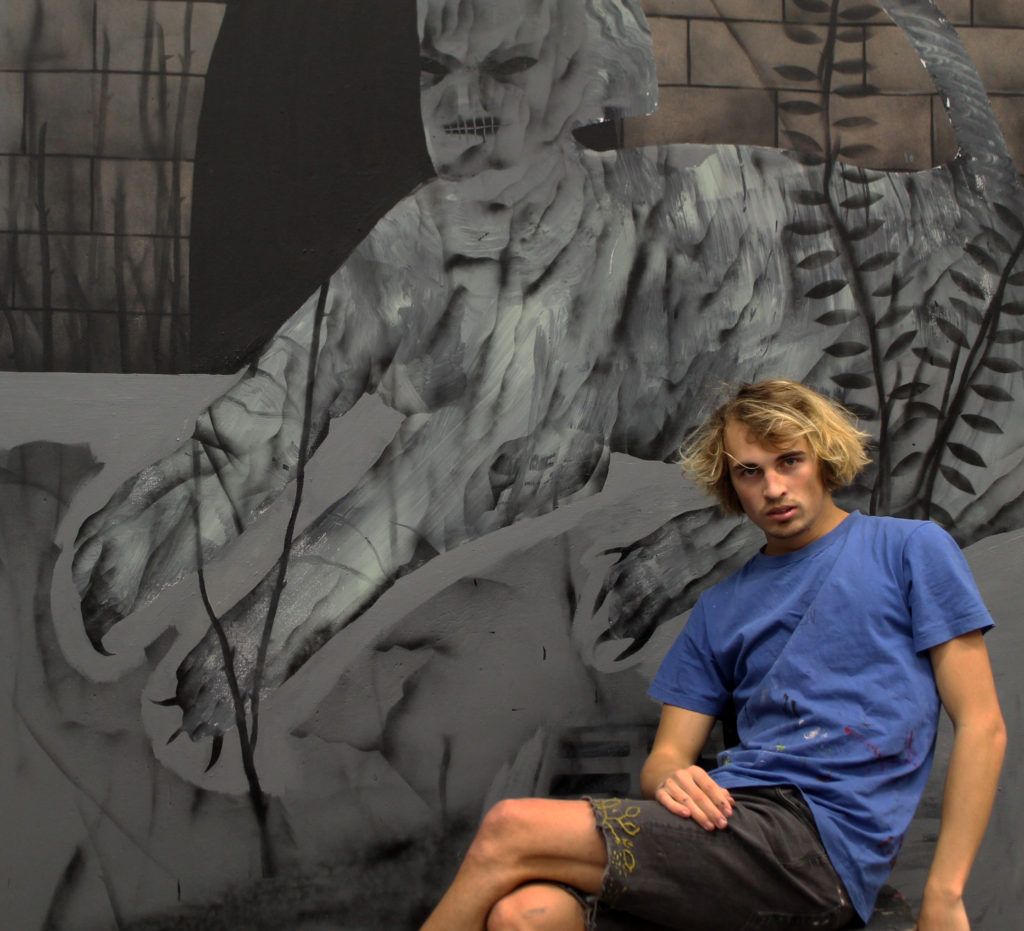 AMM: Hi Vojtěch! In 2017 you studied abroad at the Academy of Fine Arts in Warsaw, Poland. Are you back in the Czech Republic now? What was that experience like?

VK: Hello, I was in Warsaw for a one-semester internship in Jaroslaw Modzelewski’s studio, which I greatly appreciate as a painter. There are plenty painting studios which are all led academically enough. This system did not suit me because the student did not have too much free hand, and all the free work was related to the model that had been sitting in small studios for days. I did not paint much. I had four paintings which I repainted all over again, I finished them right after my internship when I came to Czech Republic.

Most of all, I enjoyed the music scene, the Polish people were always musically one step ahead of the Czech Republic, especially Warsaw. During the war it was completely bombed and in many cases they built the same block of flats according to the same plans. Then there’s a several skyscrapers built around the Joseph Stalin Culture Palace to hide it. Warsaw is a mix of everything, but it’s still an industrial metropolis. It has many similarities with the city of Ostrava, where I am currently completing a diploma at the Faculty of Arts, drawing studio.

AMM: What are you listening to, watching and reading right now? Are you influenced artistically by popular culture and media?

VK: I’m currently reading John Berger’s Ways of Seeing. Berger does not think about art from the art-historical point view, but in terms of how art reflects the political and economic conditions of its creation.

I listen to music a lot and watch movies. I collect the vinylx and have the band München Konflikt with which we fly on the mad electric wave. It’s fun and great inspiration. We have behind us the first album “Just Dů Dit Turbo Violence” and at the beginning of 2019 we are going to record the second album.

I’m inspired by the songs of other artists too, such as the song “Do not Take Your Guns To Town” from Johnny Cash, from which I painted Billy’s picture. (In the text of the song Mother persuades her son Billy Joe, not to take the gun to the city. Billy explains that he’s already a big kid and he’s out. Then the cowboy meets him in the bar and immediately bothers him, and when Billy gets nervous and wants to pull his pistol, he lies with a bullet in head).

AMM: What’s your process of painting? Do you sketch and plan each composition, or follow a more intuitive approach?

VK: I tried sketching and then painting accordingly, but I never managed do that good image as the sketch itself, so I do not sketch and I paint intuitively directly on the canvas. The composition is formed during the process. I make mistakes which I repaint, because of that new ideas are made, so sometimes I paint a beast instead of a boxer. 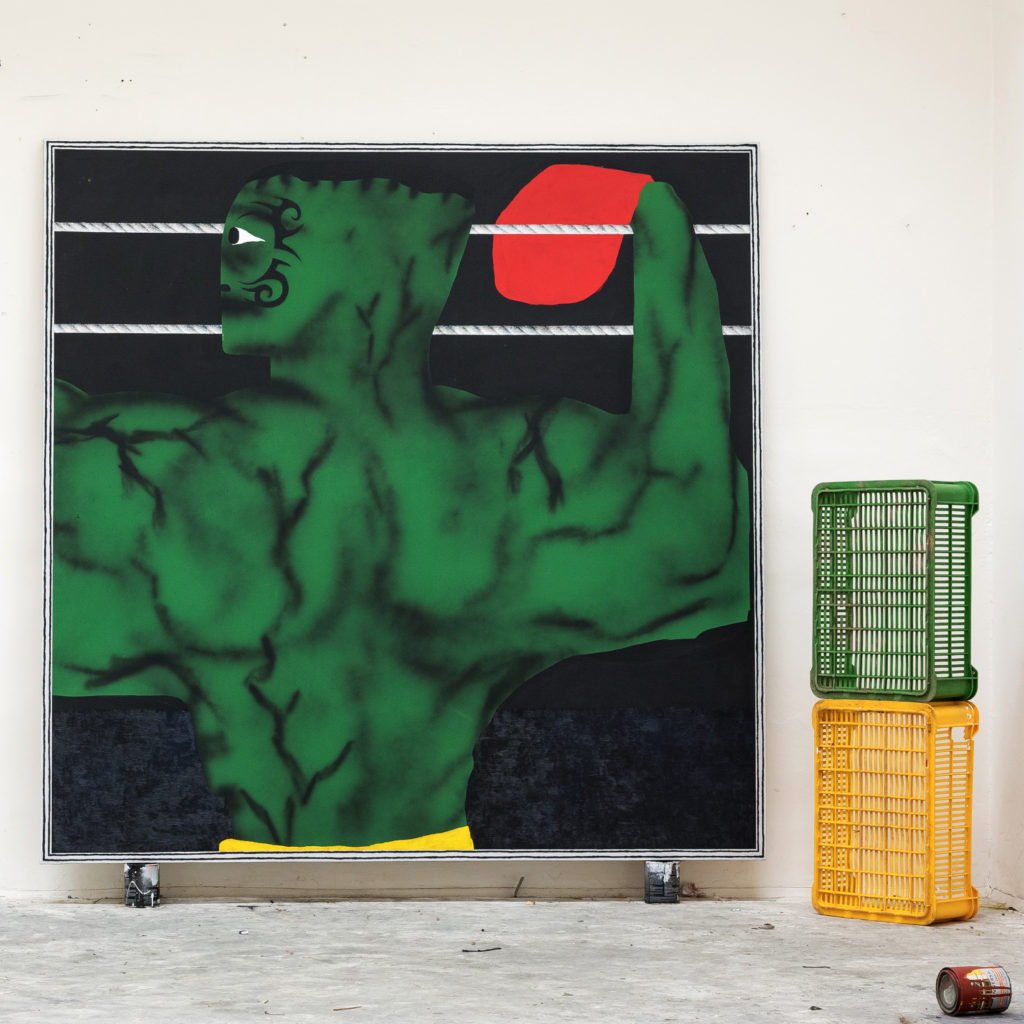 AMM: Reading over your CV it seems you found your way to painting via ceramics and drawing. Can you tell us a bit about this; how you’ve settled with painting and also how other mediums might still play a part in your work?

VK: To be honest, the decision to go to study ceramics for me was such an optimal decision. One of my brothers is a sculptor and the other painter, so I wanted to do it something else. In addition, I enjoyed everything the same way and I did not know which media is closest to me. In the ceramics field, I have learned a lot of practical things which I still use. Also I’m preparing a series of large statues of clay for this summer.

I kept a distance from painting first years of study, as I was a little scared of it. I did different things like film-inspired drawings, especially from Lynch and Buňuel movies.

And before my Bachelors exams I attended an exhibition of Jonathan Meese in Trade Fair Palace in Prague. I was surrounded by massive images with enormous amounts of colour. I saw that he was painting in a spontaneous boom. It was full of energy, it inspired me and since then I actually paint and I am not afraid of it.

AMM: Your paintings typically have a very shallow depth of field, with suggestions of depth created through surface detail such as texture or pattern. What are some of the influences that inform your work stylistically?

VK: When I create the image, I have a lot more information at the beginning, structures, textures and patterns, which gradually overlap until I get to a simple composition and a uniform shape. The figure is always dominant. Then it’s about the contrast and colour relationship. Many times they are in monochrome, I try to make the simplest and the most powerful impression possible. When I’m finishing a painting I often paint a frame at the end. This will terminate the entire composition to image format, it’s my personal good-bye to the picture.

AMM: Most of your work is very large, and even so, your compositions extend out of the picture frame. What appeals to you about working on such a grand scale?

VK: I like to do things on an over-the-top format, the impression is much stronger. A two-meter canvas is for me actually a natural format. I enjoy it much more than smaller paintings. I feel much more relaxed, I dance, sing, etc. I would like to paint larger paintings, but it would not pass through the door. 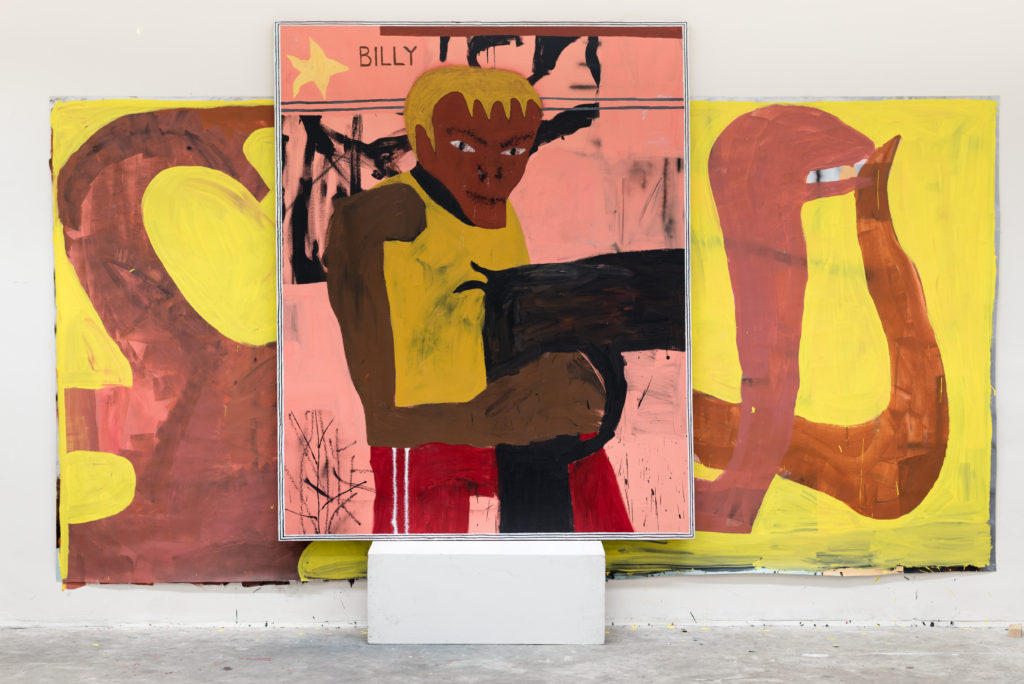 AMM: A lot of your paintings feature fighters, animals and figures from mythology. Please tell us about the subject matter in your paintings and what some of the recurring motifs represent in your work?

VK: Don’t know why, but I’m limited in figure, so I’m trying different processing options. I use large cut-out figures, figures by themselves, or figures differently distorted. I often repeat the same pattern in my paintings which is direct eye contact with a spectator and simple stylization of plants.

For wrestlers I use a simple background with a few distinct lines which represent the rope or some limited territory. All the textures and details are concentrated on their bodies.

In the gods of Greek mythology it is technically similar, only the background is much more dramatic. Sometimes I also paint monsters that I interchange with people (such as my painting “Girlfriend Christine“) or I use patterns of other animals. I transform reality after my own, which is actually the artist’s message – to create your own world.

AMM: What roles does humour play in your work?

VK: It should not be exaggerated. I like the border between joke, madness, sadness and fear.

AMM: You’ve found an interesting way of painting bodies. Please tell us a little about this.

VK: Usually people focus on the face. Well, fighters have more interesting bodies and when it is not a fighter, I still paint a muscular body, because it is logically more interesting – more handsome. It’s painting with spray and acrylic. I made a customized cap that sprays irregularly. It’s a thing I could not do with an airbrush. The spray is raw and fast, and it suits my work well.

AMM: Do you have any daily rituals?

VK: I paint every day. I really believe it’s all in the hard work.

Find out more about the artist: www.vojtechkovarik.com 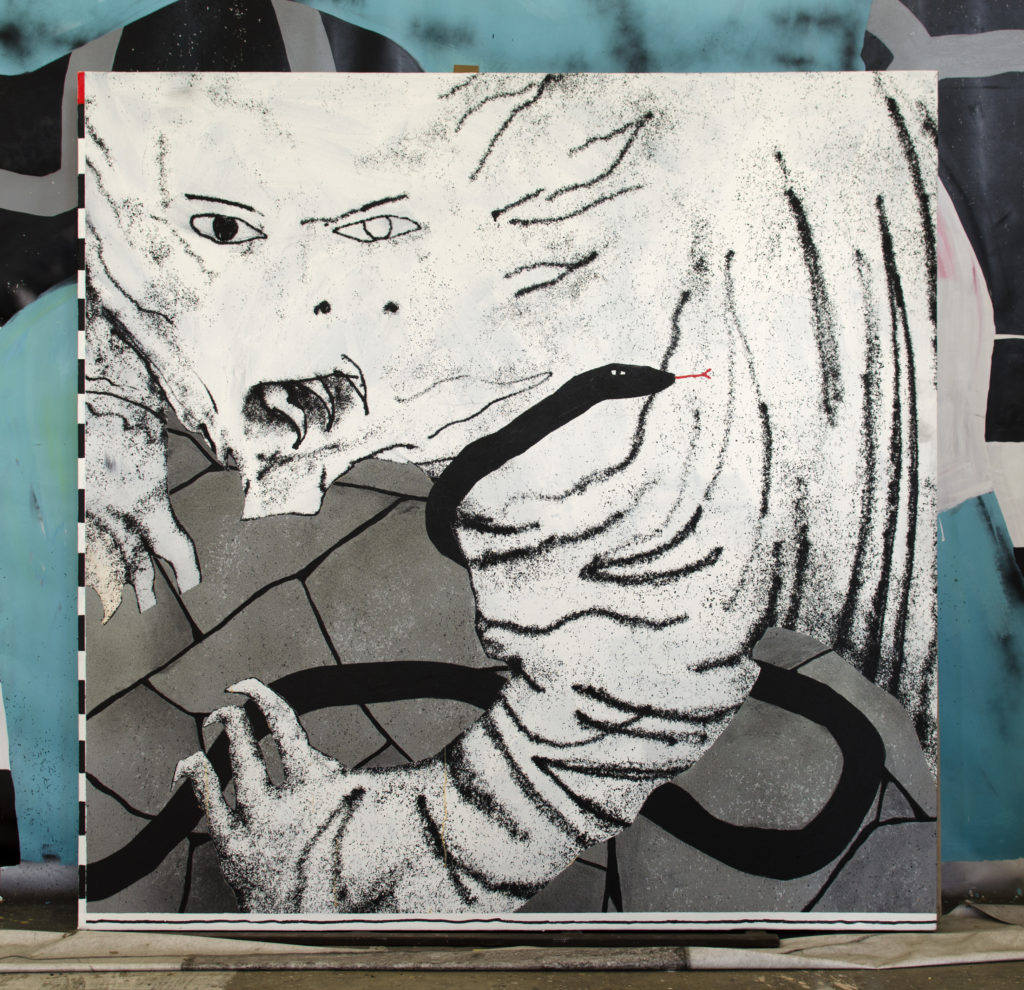