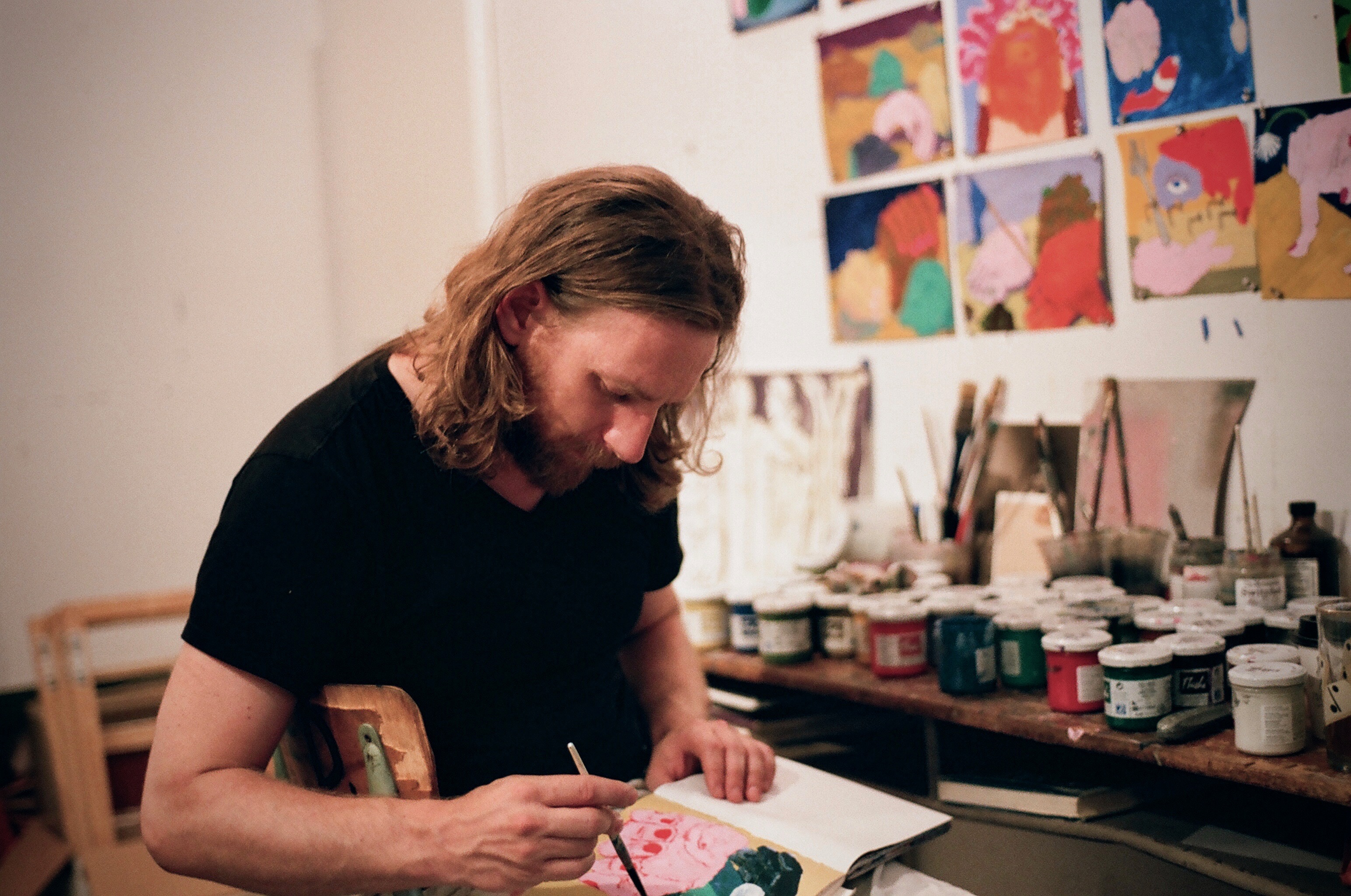 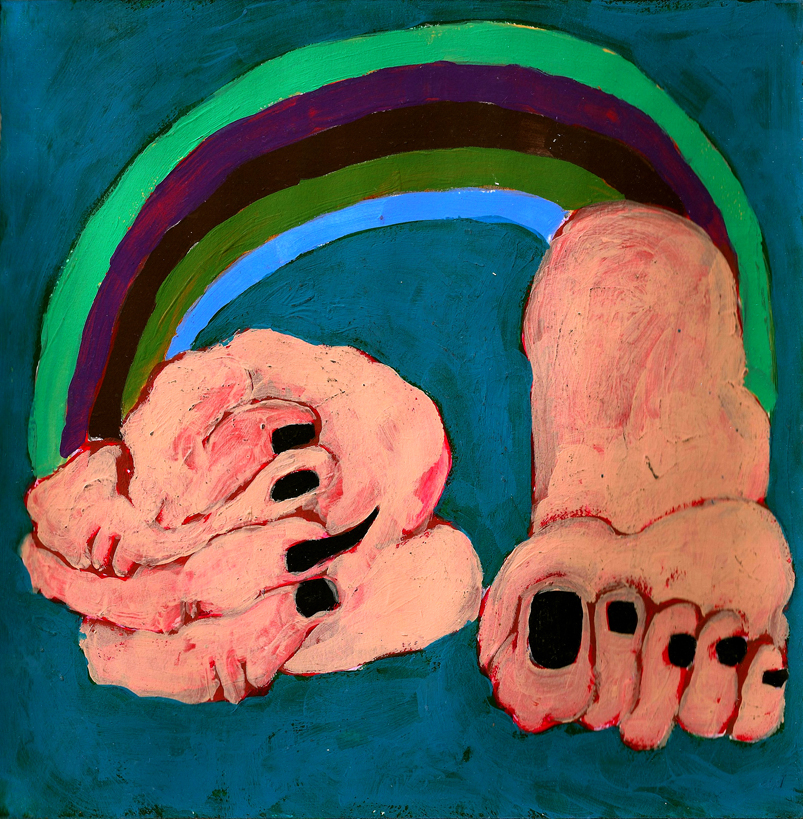 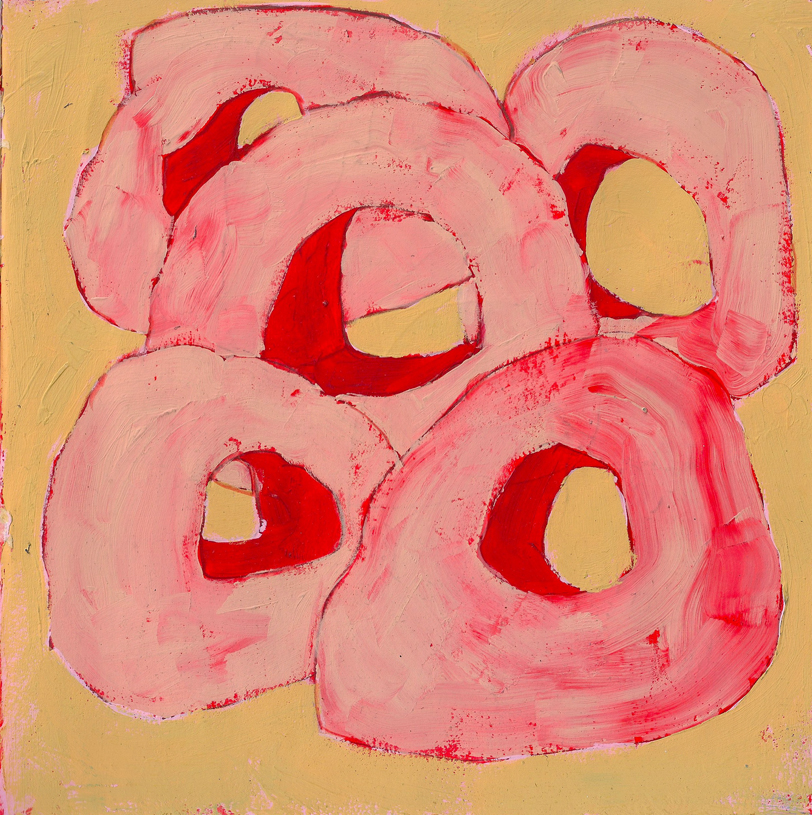 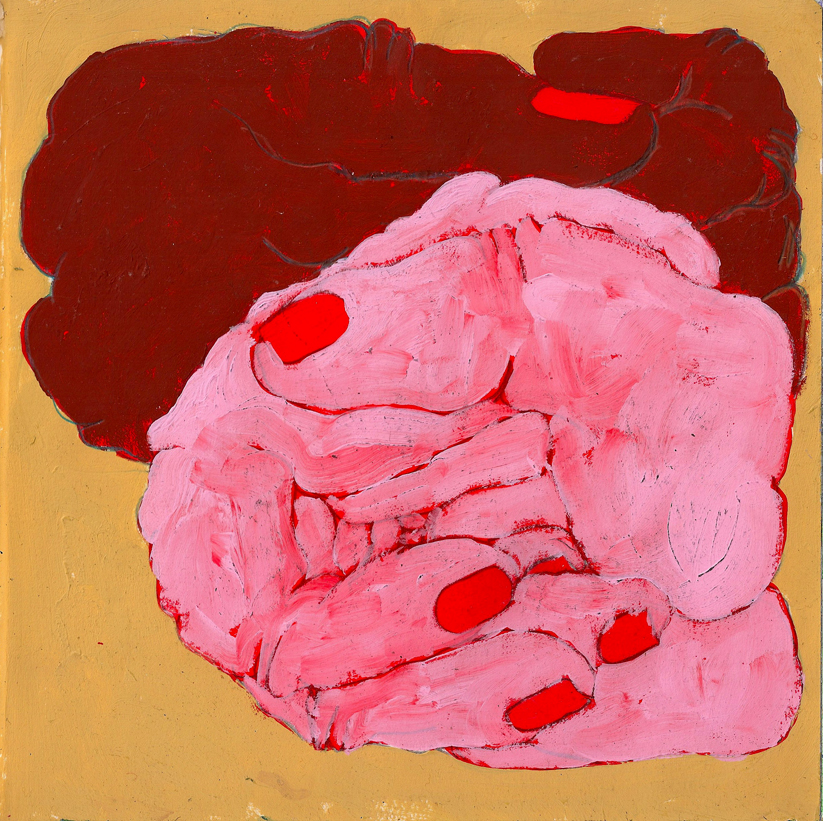 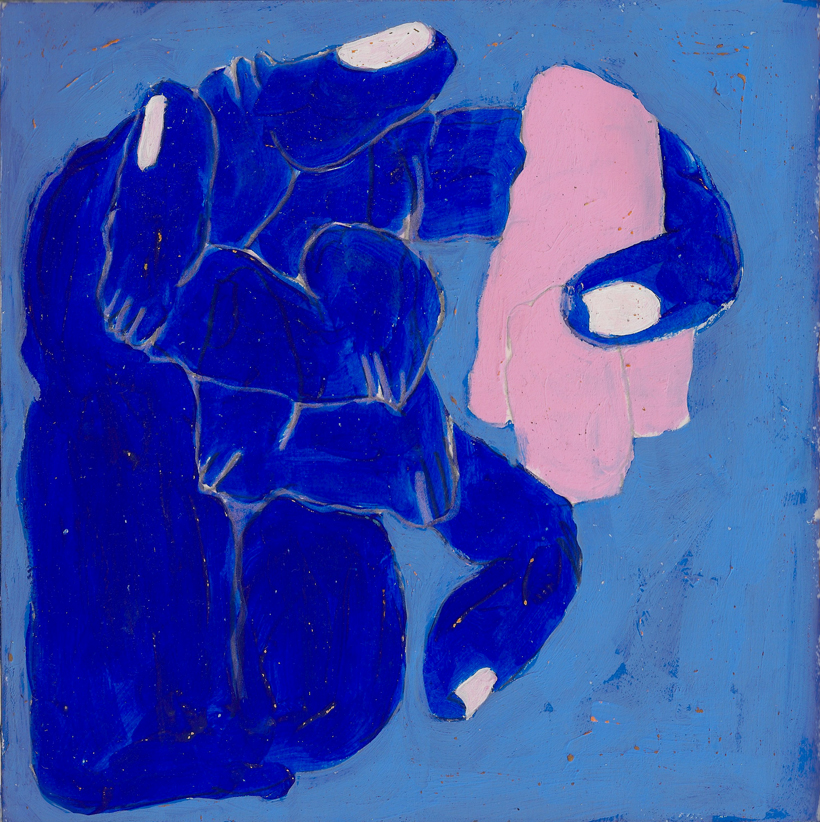 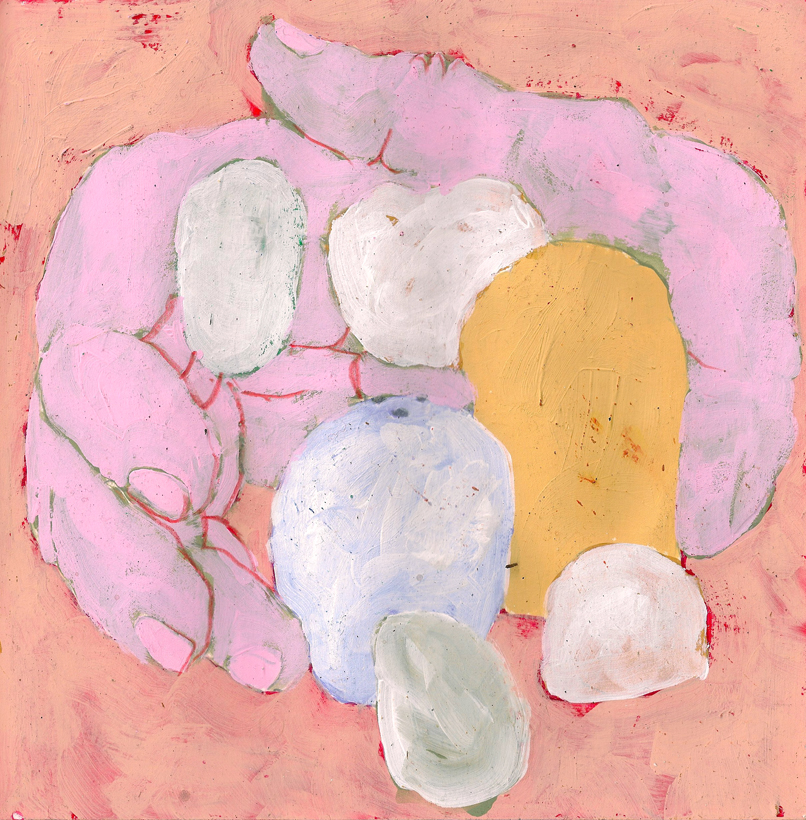 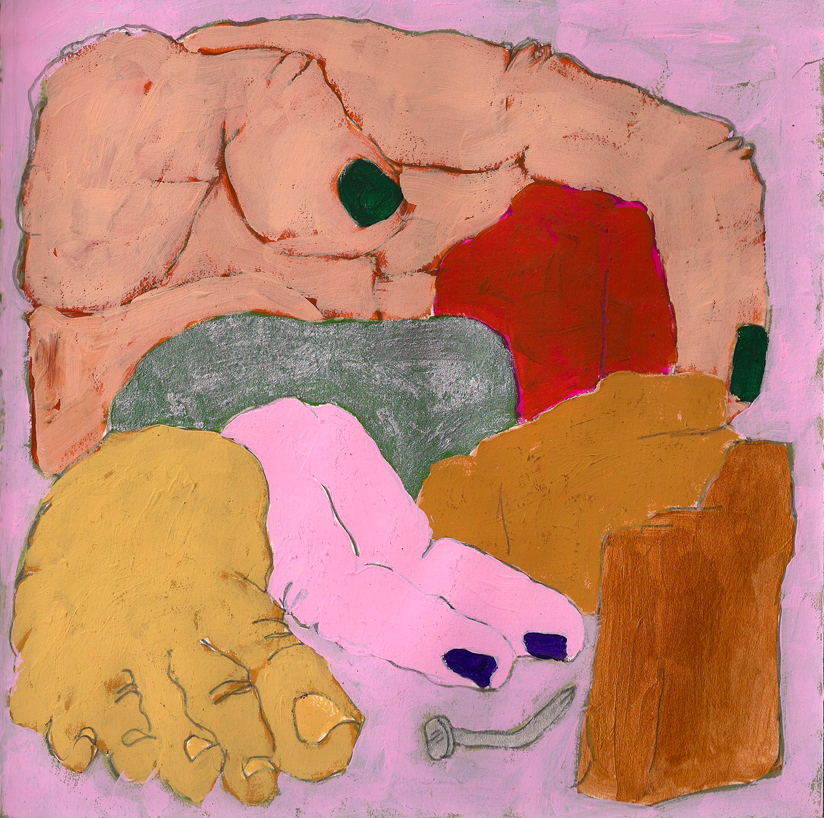 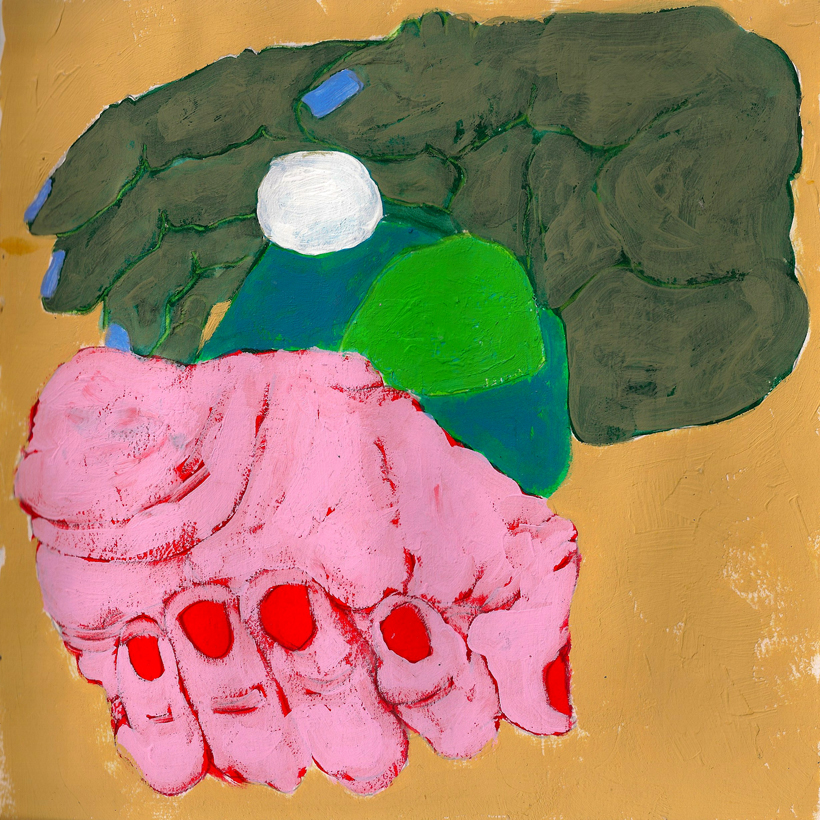 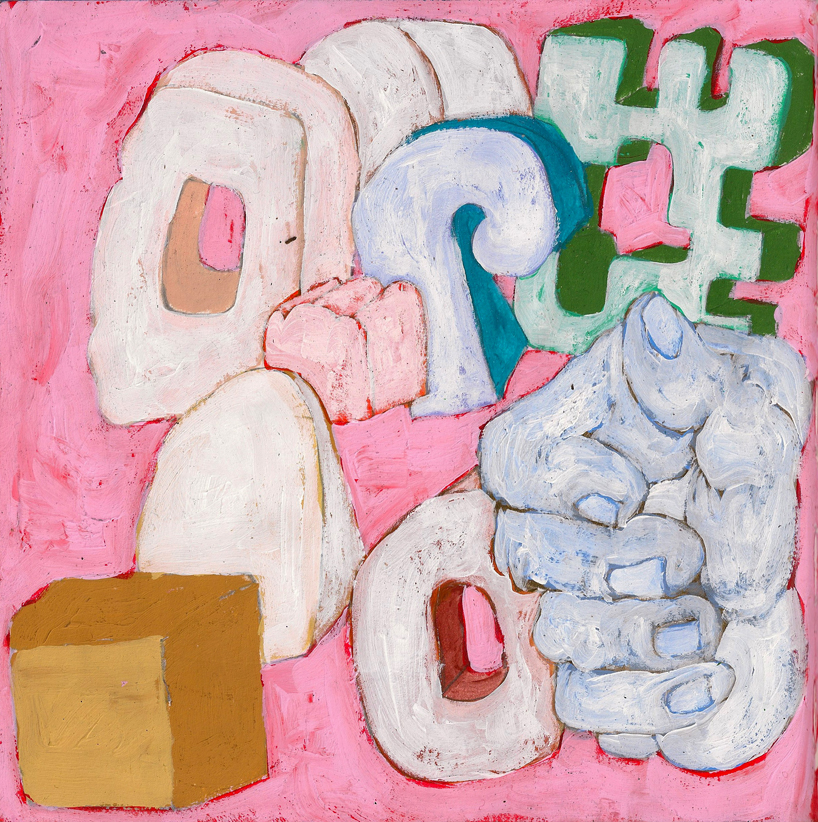 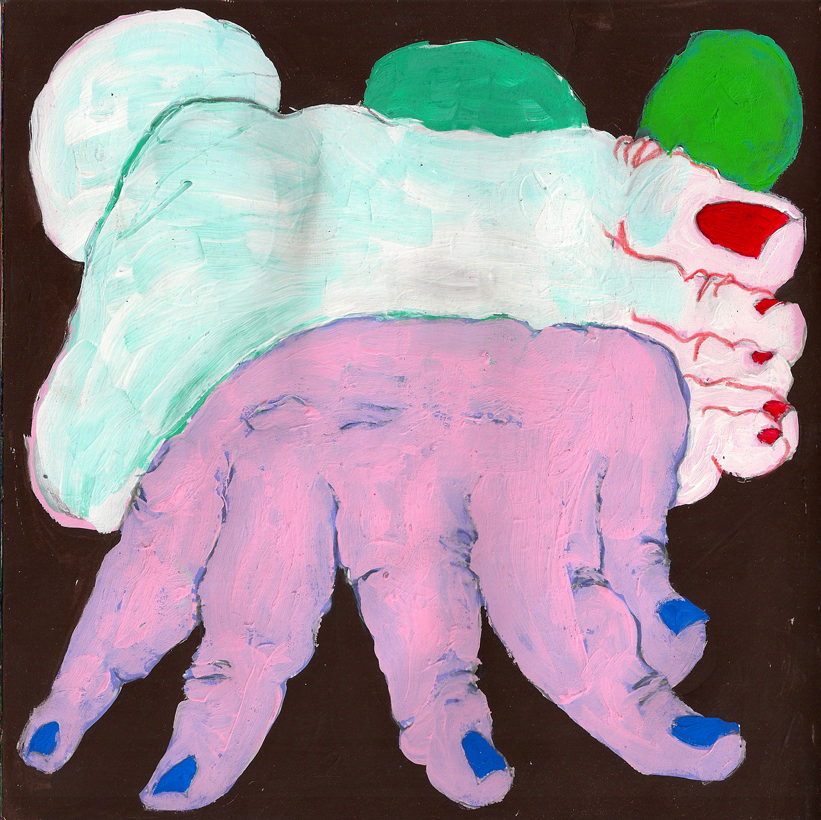 Brooklyn based artist, Austin Furtak-Cole’s paintings depict absurd scenes that capture life’s more absurd moments. Currently working in bright colors in flashe pigment, Austin’s work is rich with vibrant personal iconography, humor and playfulness. Hands, clouds, fragmented body parts and effluence recur in his work. His compositions are often awkwardly framed, disrupting conventional views to make the viewer pause and try figure out what the scene is depicting. Coming from a traditional fine art background, Austin’s deceptively simplistic style belies a very serious interest in representation of the human form. Situated partway between formal abstraction and figuration, Austin has created his own fusion style which is both theoretical engaging and lighthearted. He has exhibited at numerous galleries in New York including Denise Bibro Fine Art and the Brenda Taylor Gallery as well as The Gallery at Burlington College in Burlington and the Helen Day Art Center in Stowe, Vermont. In the interview below, we chat with Austin about his career highs and lows, finding his artistic voice and being a part of thriving artistic community.

AMM: Hi Austin! You’ve been making art for some time now. Can you share a few career highs and lows?

AFC: A career low would have been the year after finishing graduate school. It was a bit of a shock for me to loose the structure provided by an academic institution. I naively thought I would have a smooth transition moving to New York and finding a job – I ended up moving to New York, but really struggled to find work, as it was the beginning of the recession, and after six months moved back home to Vermont with my parents.

Beyond trying to figure out how to restructure my life I was also slowly exiting a bad relationship, my parents were on the verge of getting a divorce and my twenties were coming to an end. These things feel less impactful to me now, but at the time they forced me to reevaluate a lot of things in my life. I took solace in my work and actually was quite productive through that year, despite all the upheaval.

After that I worked at the Vermont Studio Center for two-and-a-half years, and during that time I met some of the most important and influential people of my life. I think very fondly of them and that time, so that might also be something I consider a high point.

I also like to think that the work I’m currently making is always at my career high. I always feel most excited about my newest work.

AMM: Your art is populated by recurring motifs – hands, clouds, feet. Please tell us more about your visual language.

AFC: I’ve always been interested in artists who created their own personal iconographies, like Max Beckmann, Giorgio de Chirico, and Philip Guston. From a young age, I felt I had the ability to paint, but the question of what I should paint kind of eluded me. Eventually I came around to the idea that I wanted to create my own personal iconography, and it’s simply come to consist of things I like, or find interesting.

I’m interested by the figure, the potential symbolism of clouds, drawing odd shapes, the stillness of rocks, words, humor, my friends, my loves, and the slew of human detritus that we produce as a species. 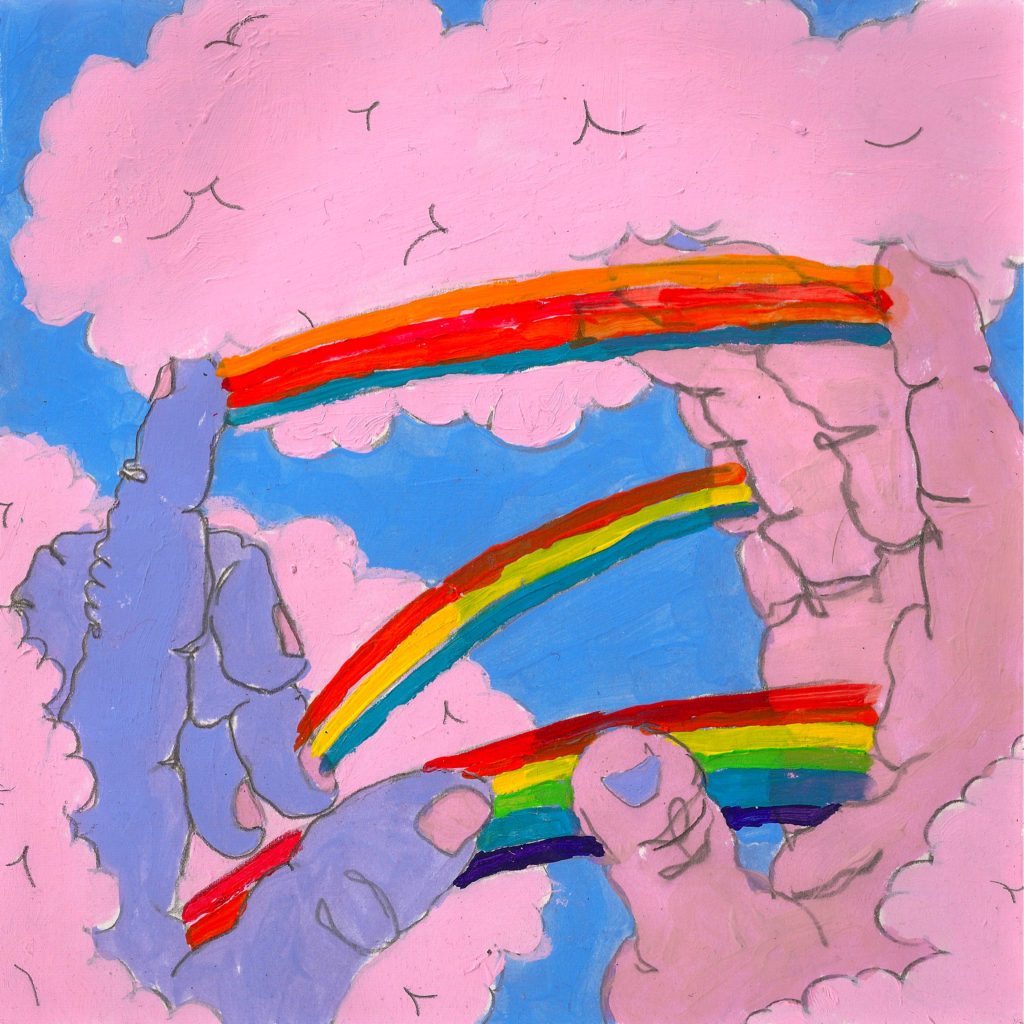 AMM: How has your style changed over time? What’s motivated these shifts?

AFC: I spent many years painting abstractly, mostly because I felt like I didn’t understand the importance of abstraction, or why it was viewed with such esteem and romanticized by the American art historical cannon. My interest in the figure continued to pull on me while I made those abstractions though, and I always felt like the figure lurked inside. Eventually, I had to be honest with myself and allow those figures to emerge. I sometimes like to think of the clouds I paint as an abstract symbolic fog that has lifted, exposing a truer version of myself.

Also, I’ve always kept a sketchbook, which for a long time was the polar opposite of my paintings. The format of the sketchbook allowed me to play, be more open and fun – where in painting I struggled to grapple with its heavy history and the expectations of what it meant to be a painter. This really stymied my painting process, and over time I’ve worked to bring my painting and sketchbook process together as one thing, which has dramatically altered things stylistically.

AMM: In your current body of work you’ve used flashe and gouache paint whereas in the past you worked mainly in oil. Can you tell us a little about your interest and choice of different mediums in your work?

AFC: I worked in oils for at least ten years with a very limited pallet of six colors, and during that time I built up a lot of expectations and rules of what that medium could and couldn’t do. Although I really love the physical qualities of oil paint, I needed to break my own internal logic surrounding the medium to become freer in my process. That started with shifting to gouache, and then by total chance I inherited almost forty jars of Flashe from a friend who was moving. That was an eye-opening moment because all of a sudden I was thrown from a pallet where I would mix from six basic colors to a pallet of forty colors that someone else had chosen. There was so much new possibility wrapped up in that and it had a great effect on my painting.

I also enjoy the quickness in which I can alter things with water based materials—it’s much more forgiving and allows me to make quicker decisions while in the painting process. At some point I might turn back towards oils and attempt to meld them with the knowledge I’ve gained from these newer materials.

AMM: What role does humor play in your artwork?

AFC: Humor plays a pretty large role in the work. I like joking and making light of things in my day-to-day life, and I try to allow that kind of playfulness to make its way into the work. I think it’s also a nice way to buck the serious kind of hoopla that can sometimes surround how we perceive painting. As a general rule, I think it’s important to insert humor lavishly. Life is full of enough suffering—it seems important that we find healthy ways to lift ourselves out of that whenever we can. 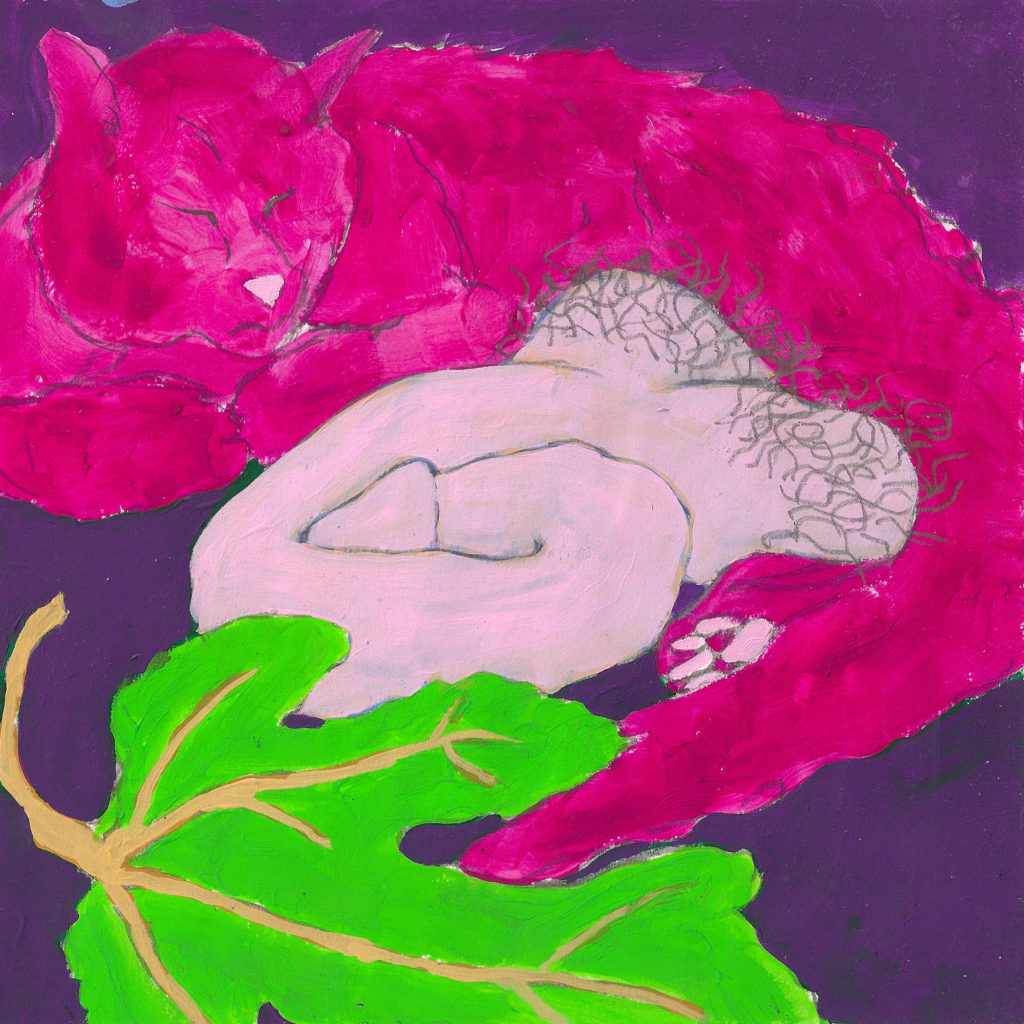 AMM: The images in your current body of work seem to illustrate a series of tenuously connected scenes. Does your work have any bearings to your personal narrative? How does narrative function in your work?

AFC: My personal narratives influence a lot of the scenes I create, but I try not to get too caught up in making the scenes truthful to a moment that might have happened. My personal narrative gets thrown into the mix with other things of interest, and they result in these fantastical amalgamated scenes that I hope encourage interest and curiosity.

Often the narratives I create occur just before or after what might be considered a climax, and we’re getting a glimpse into these moments of building or deflating tension, leaving us to ponder the possibilities.

AMM: Your work is generally really bright and colorful. What informs you choice of color palettes?

AFC: There’s something I find absurd and fun about making things so colorful—depicting something representational that could exist in the real world but doing it in a highly saturated way seems strange and enjoyable to me. I also like playing with how colors interact and seeing how they sit next to and on top of each other, and I’m interested in how I can push things to work in some formal or aesthetic way.

AMM: Give us a 360 snapshot of your studio today. 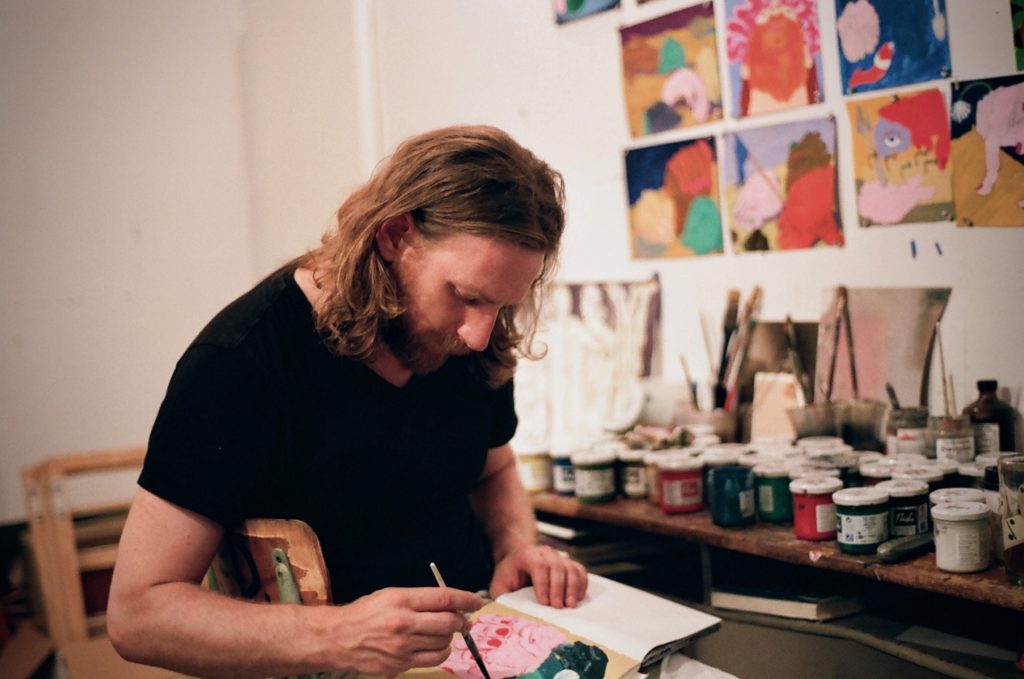 AMM: What inspires you?

AMM: Did you always know that you wanted to be an artist? What was your Plan B?

AFC: I was always drawn towards being creative and was encouraged to do so when I was younger, but it took me some time before I started calling myself an artist. I think I always wanted to be an artist, but I had a fear of what that actually meant, and it took me some time to come to terms with that.

Plan B?…YOLO working it out as I go.

AMM: What’s the last think you saw/read/heard that changed the way you think or feel?

AFC: I’ve been reading a book called The Devil At Large by Erica Jong, which is about the writer Henry Miller. In parts of the book Jong argues that Miller is overlooked by academics and critics for his strong elements of sexuality, but she defends his writing as being much more than mere pornography. His exploration of sex in a time when it was considered taboo was part of a larger search to find himself and be free of the constraints of his upbringing, culture, and society; his writing is about the process of self-liberation, and the importance of finding that as an artist—which is largely what attracted me to his work.

While reading this book I also happened to go to this year’s Whitney Biennial and was keeping up with the controversy surrounding the Dana Schutz Emmett Till painting, Open Casket. Thinking about the controversies artists like Schutz and Miller have created through their work had me wondering about the role of the artist, and asking myself an important question: Is it the responsibility of the artist to be right?

AFC: There’s a group show later this summer that I’m excited to be a part of. Also my comedian friend has invited me to do the cover of his joke zine—that should be fun! I’m always applying to things and looking for opportunities. Eventually, I’d like to move back to Vermont and own a dog.

Find out more about the artist: www.austinfurtakcole.com 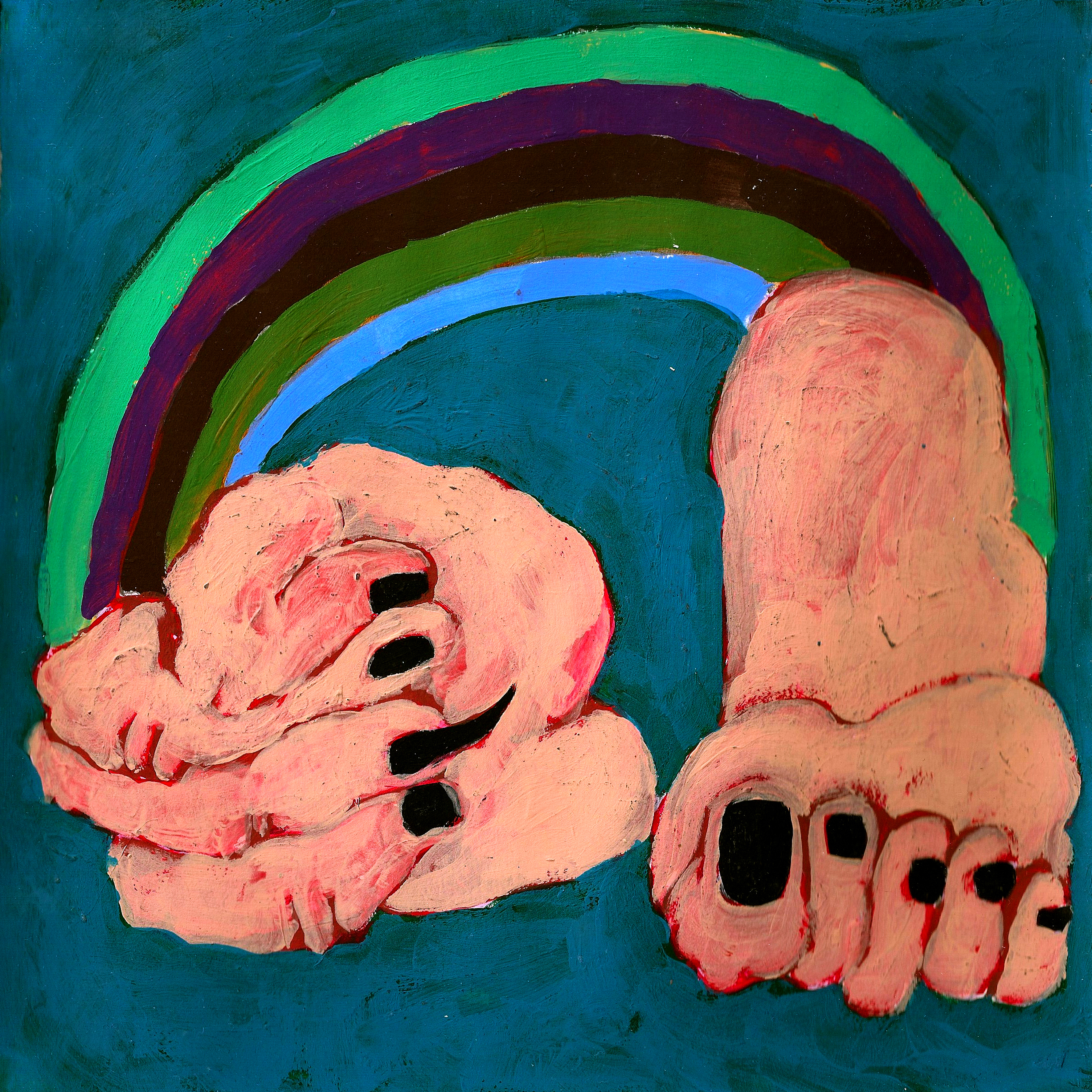