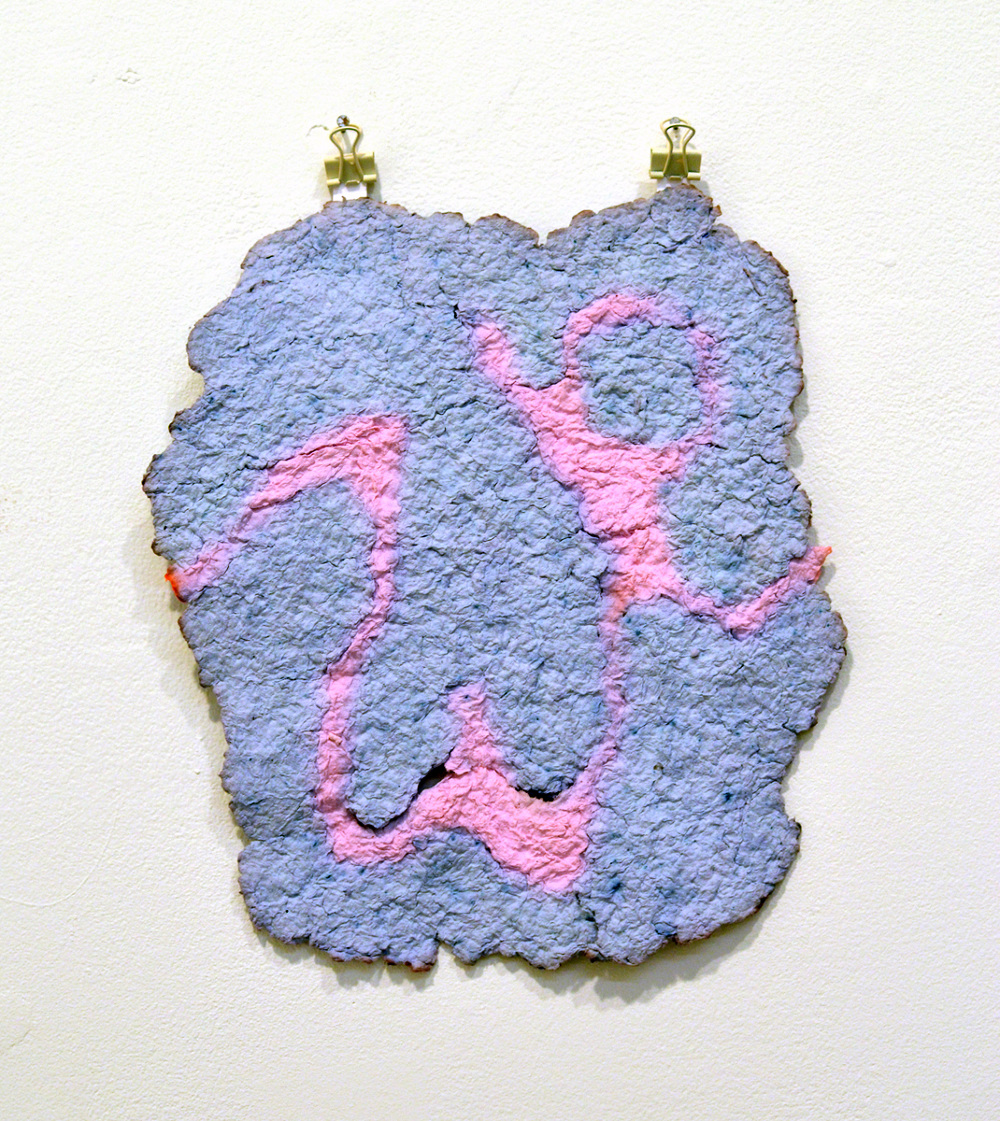 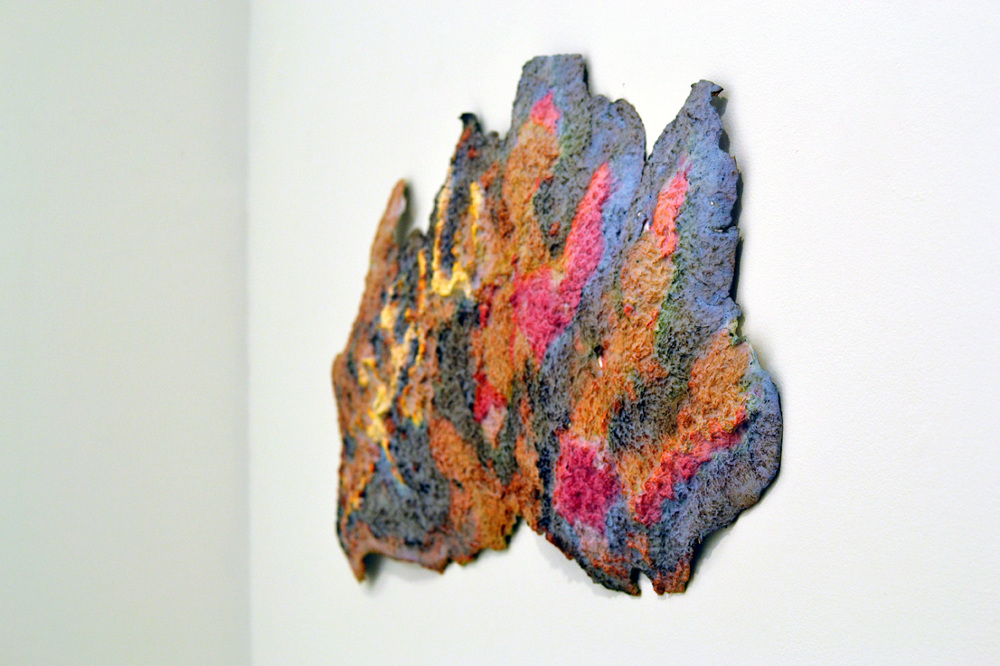 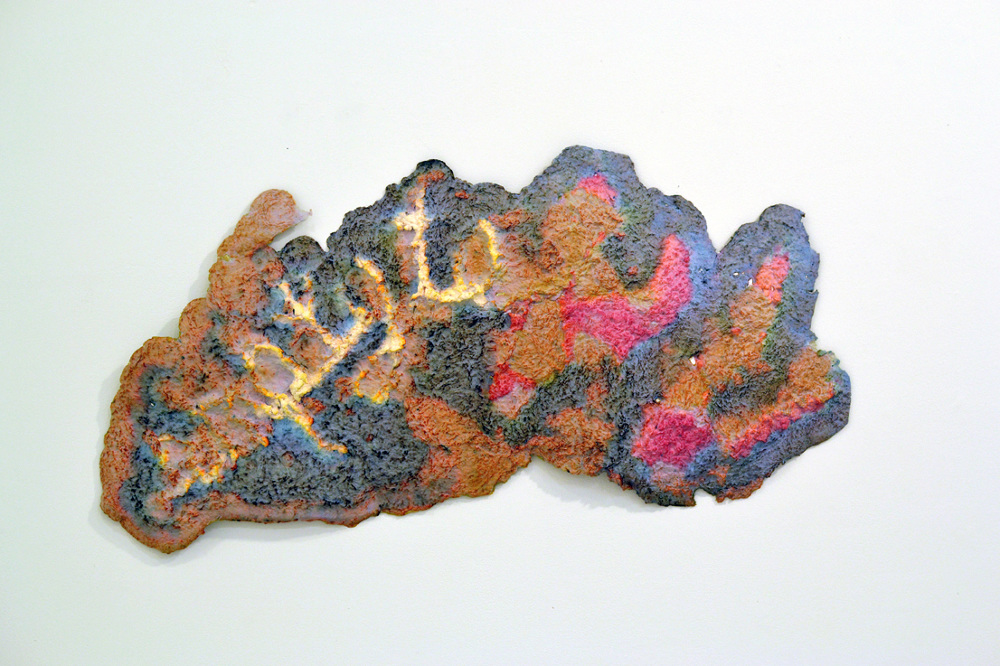 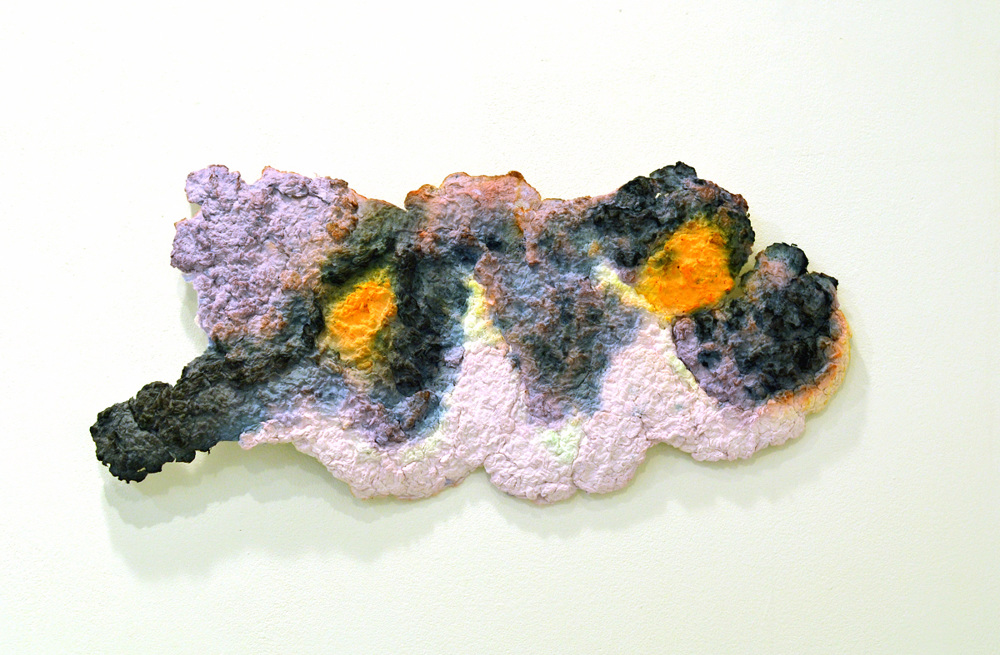 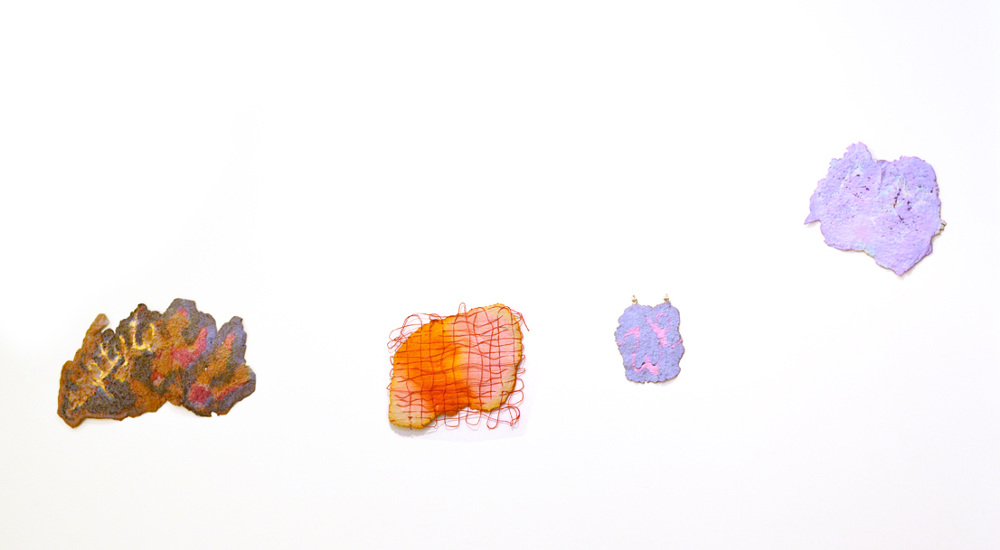 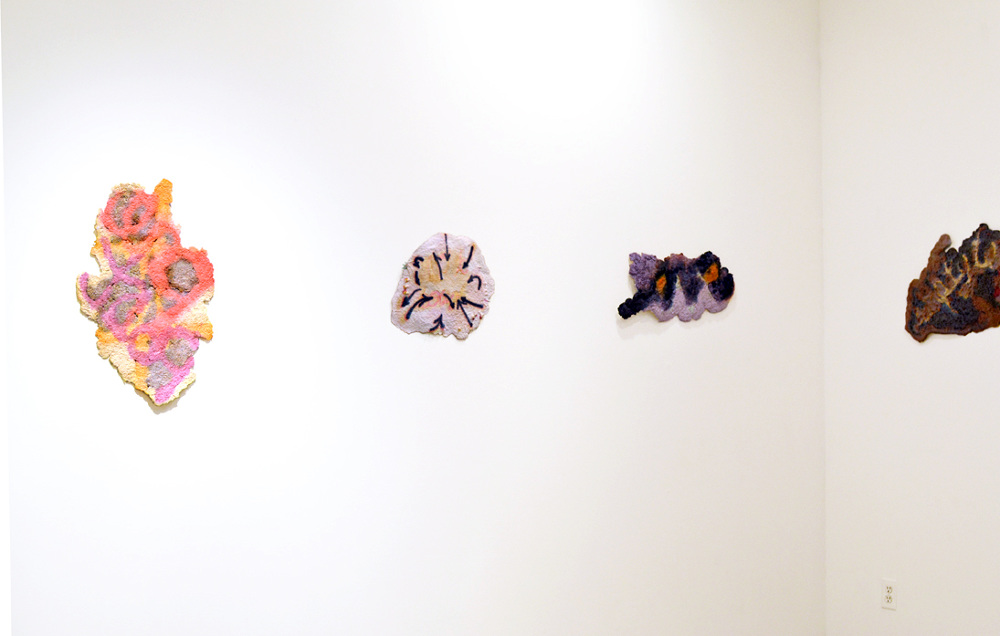 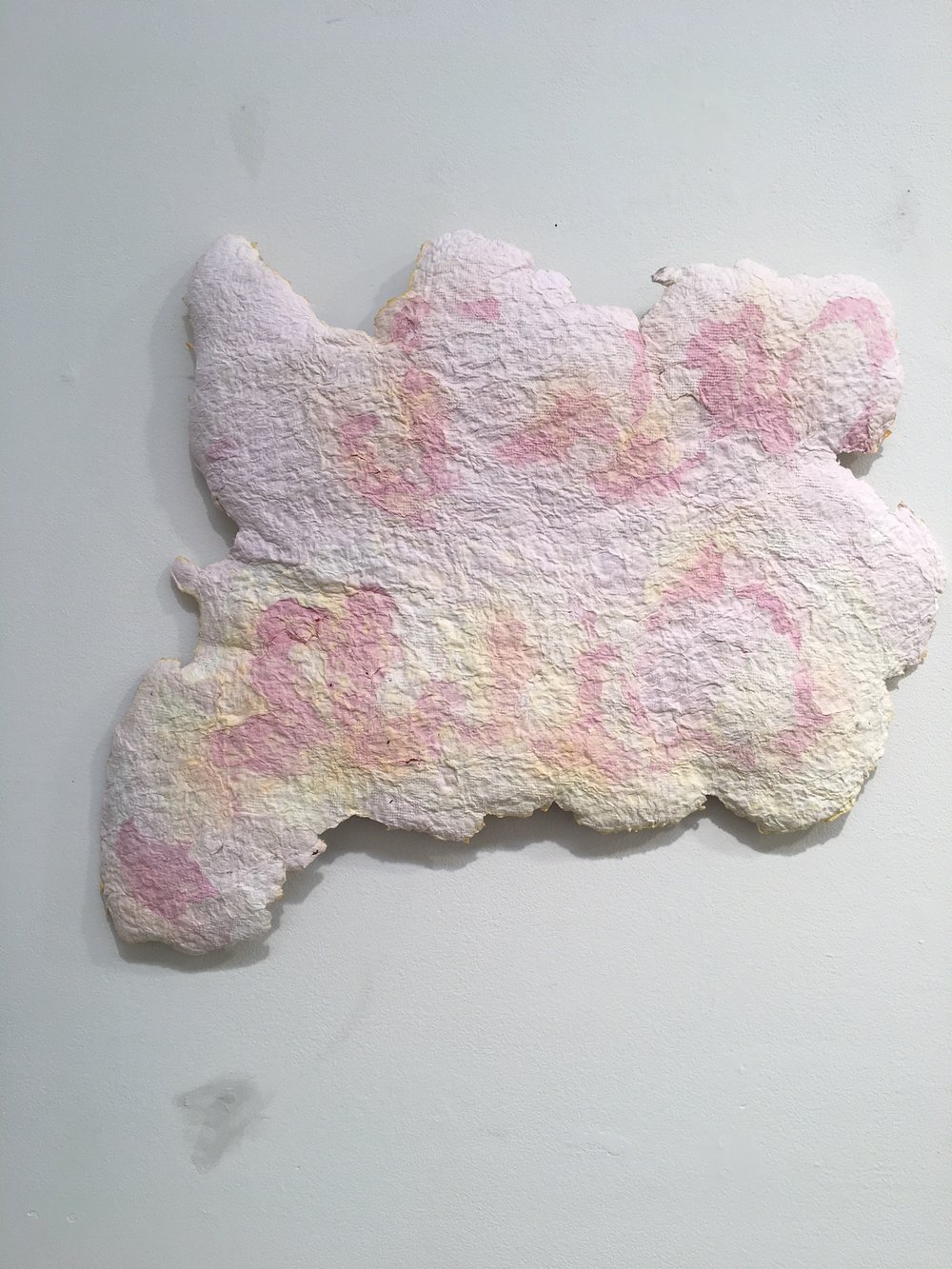 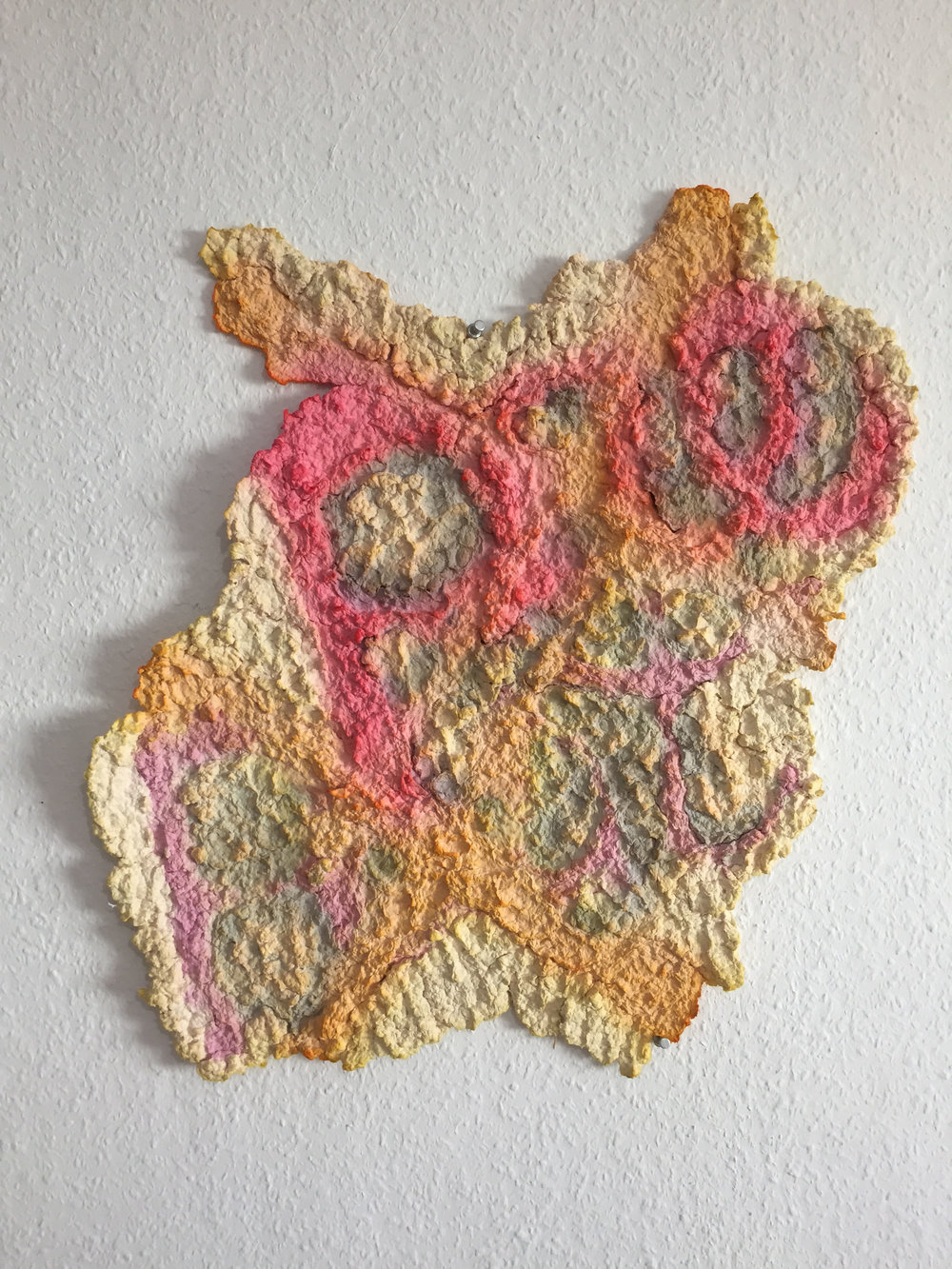 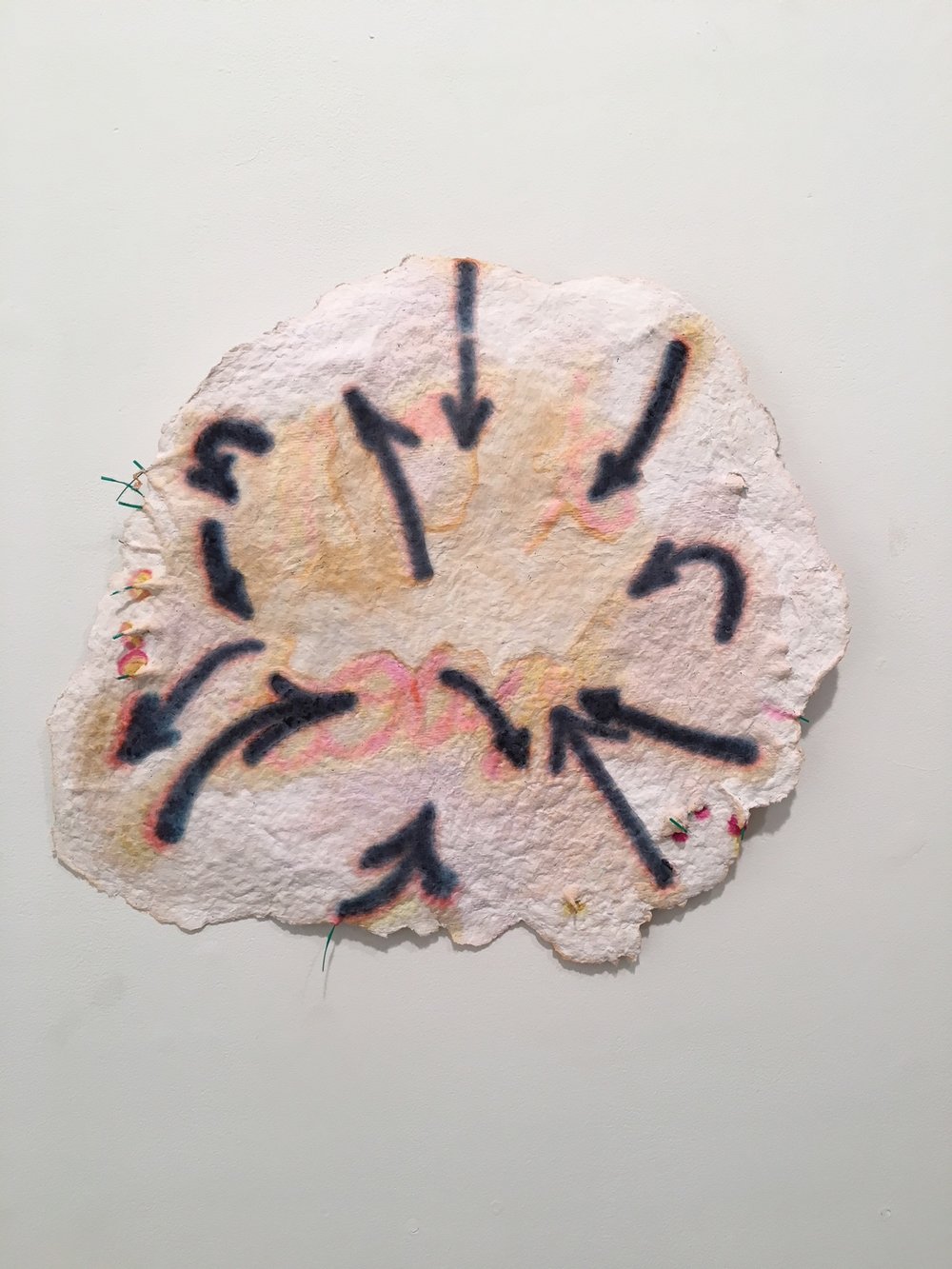 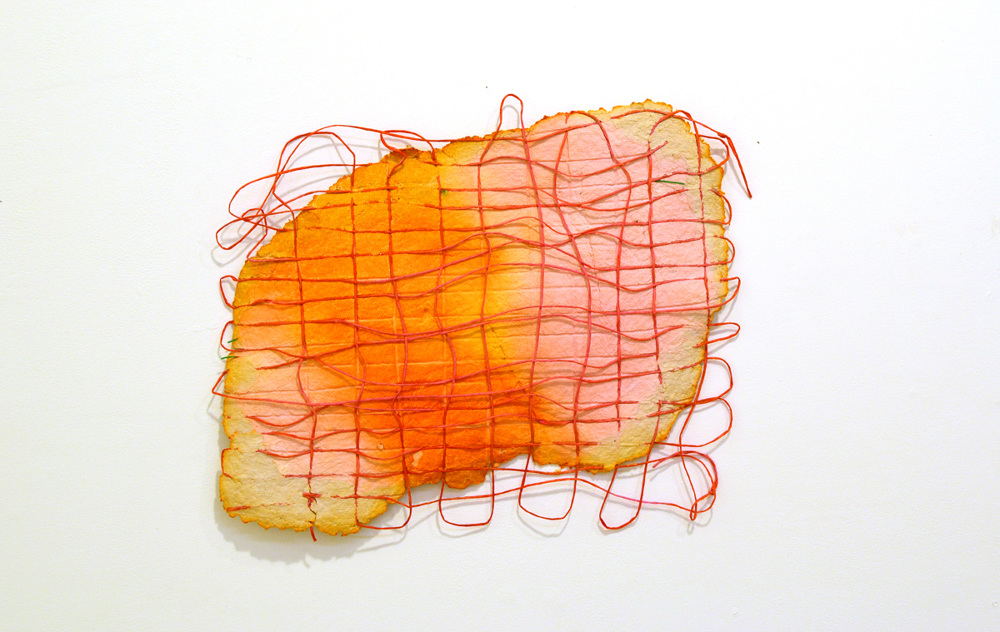 Germany-based artist Loren Britton is a medium-shifter. Loren’s interests in language, naming, sexuality, and the political body are constantly carried out in different materials as they search for the form that best supports their ideas. A champion of queer art whose work communicates a quiet, radical politic, Britton is also influenced by histories of feminism and civil rights. As a New Queer Abstractionist, Britton re-contextualizes these histories in a modern sense.

Britton is currently grappling with the hegemony of language and naming through the use of paper pulp. Called Second Date, their current exhibition at the Field Projects Gallery in New York showcases a number of colorful paper pulp creations, which Britton sees as a way of digesting political urgency.

Join us in an interview with the artist as we learn about Britton’s current work and influences – both historical and contemporary, and the thoughts on the state of queer art today.

AMM: Can you tell us about the inspiration for your current show at the Field Projects Gallery?

LB: Something that’s been really inspirational to me has been this old magazine called Transvestia. It was one of the first trans publications that was ever published in the United States and I’ve been looking at the language of desire in it. Politically at the time, Civil Rights was happening and it was the beginning of the gay rights movement as well. There were a lot of problems with the movements looking back at them in that they were often classist and exclusionary to trans folks, but there was a general feeling of liberation. The language of that time is very urgent. And I’m interested in the urgencies of language in both times and spaces. In some sense the paper pulp pieces started as a way to think about digesting this importance or the sincerity of these politically urgent moments. Within the pieces there are often phrases or dedications, or peoples name’s or conversations that have been either shredded and turned into abstractions or have been reconstituted in the paper itself. 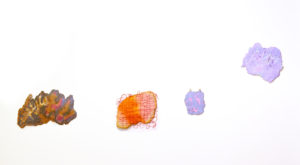 AMM: Let’s talk about your interest in naming and language. How do you think that comes through in your art?

LB: I’m really interested in thinking about structures of play as a way to get out of the hegemony of naming. The thing I’ve become particularly frustrated with is the way that in political organizing, we name ourselves in order to get rights, but that naming is only useful insofar as it brings us together. But I think that when we name ourselves in this way and we meet someone who’s not named like us it actually separates us rather than brings us together. The structure of the work in general is about structures of play and structures of language as a way to get away from the necessary quality of naming, while also paying homage to what it can do. It’s a tense relationship with what language is and how it marks us.

AMM: Tell us about your interest in histories of collectivity. How did those histories lead to your paper pulp work?

LB: The Field Projects work is kind of referring back to collective practices of feminism. So a lot of women’s center work in the seventies and eighties around the same times that Transvestia was being published centered on the ideas of lesbian feminism and what it meant to have rights in the queer civil rights movement. The kind of work that was being made collectively was often paper pulp. I’m interested in the histories of collectivity and how to re-contextualize that in a contemporary sense. These are different ways that I’m thinking about collectivity and identity and structures of naming – similar ideas but in different manifestations. 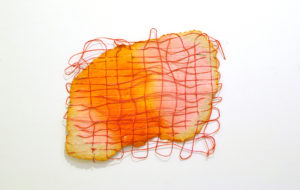 AMM: What are you hoping viewers take away from your current work?

I’m really thinking about what these histories of collectivity that I’m referencing are in a more art historical lens and also what the subtle shifts that destabilize the relationship that the viewer has to the object are. There’s this kind of misunderstanding of the material process that I’m interested in. Because the language sometimes is fairly blatant but other times it takes a while to emerge. So there’s this retinal experience of seeing through something and understanding something further about it, or maybe realizing that there’s nothing there.

AMM: You shift between mediums quite a bit. What was the creative process for this particular body of work and this medium?

LB: Previous to this body of work I had been oscillating between making sculpture and painting for some time. I’ve been a student of painting; it’s something I’ve studied for my entire academic career. And so the want to move into sculpture has been about a participatory question and how that can function for me. I guess that there’s something urgently sincere that I’m trying to communicate with the work: I really mean what I say. Maybe as silly as that sounds, the gesture of the work is intended to be one of opening. I’ve been taking the drawings I’m making and actually pulping the ones that I didn’t find to be successful. The work can be a little gross sometimes. And I like that because it feels to me to be closer to what language actually is, which is this kind of necessary evil. The material process for me always comes out of the ideas. The idea is the most prescient part of it and then whatever material will support the idea is where I will push the work.

AMM: Can you tell us about where your ideas come from? Who are your influences?

LB: I’ve been really interested in histories of epistolary traditions. I’ve been looking at a fair amount of poetry, and also correspondence in general. But some of the visual artists I’ve been looking at are Donna Nelson, Carrie Moyer, Sheila Pepe, and Harmony Hammond: strong women of the generation above mine. The question is not who are the fathers of who I’m referencing, but who are the mothers. I’m thinking about who the mothers of a contemporary trans movement are. 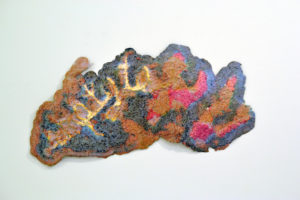 AMM: How does your identity color your artwork?

LB: I identify as a gender queer or trans person, and I was socialized as female when I was growing up. A friend of mine put it really eloquently: I’m interested in infusing the site of my work with a radical politic. The work becomes a vehicle for me to ask questions about histories of community and feminism and queer movements. I guess I’ve always been an artist and I’ve always been coming into my identity as a queer person. I’m interested in using the site of the exhibition as a space to have these conversations, and for my work to be something that’s both aesthetic and participating in a conversation with our history. I’m not as political of an artist, but the kind of quiet insistence of the politics of my work is the way that I’m interested in infiltration.

AMM: Can you explain what the New Queer Abstraction movement is?

LB: The questions around New Queer Abstraction have a lot to do with histories of feminism as I’m interested in and also its relationship to Abstract Expressionism. The argument I’ve heard is that Abstract Expressionism is a movement, art historically speaking, that was meant to deal with the imbued meaning within the context of the “mark.” It was because of the position of the person making the mark that the mark had meaning. You can see that in De Kooning, and in Lee Krasner, and in Jackson Pollock. And so the generation just above mine took up this idea and kind of reinterpreted it through its own position in a critique and also embrace of Abstract Expressionism. Abstraction is a relationship with failure to a dominant power structure, potentially. The idea of this New Queer Abstraction feels to me like it’s not a failure of heterosexual abstraction; it’s rather a potential of what form can do and what form can propose.

AMM: Have you seen the space for queer art grow over the years?

LB: I think that it’s kind of a hot topic right now. I’m both interested in it and skeptical of it. I’m aware of the way that people could capitalize on it. I do think the space for queer art has grown and I know that there’s a lot more support for young queer artists in both Berlin and New York than I’ve been aware of. I think it has a lot to do with what’s happening politically now as well. A lot of rights have been gained for trans people and queer people, in the global West anyhow. Maybe not so much in the global South. And I think that obviously being in a New York context or a Western European context it’s often easy to forget that. A lot of the work that I’m really interested in is being done in a context where it’s actually not the case that the queer conversation is so accessible.

AMM: Every year, your art looks totally different. Do you have a niche or a style? How have you progressed artistically over the years?

LB: The ideas of the work are often very similar. To think about political body, to think about sexuality, the space of fluidity, the space of dissolving boundaries: those are all questions that have been sitting with me for quite some time. I’m kind of skeptical of a contemporary moment where we make one thing and that’s what we become known for. I’m not afraid of shifting medium to what works for my ideas. I realize that’s kind of antithetical to the way the contemporary art market functions. The idea is that I don’t know if I will ever arrive at a medium. The reality for me is that the questions are really prescient and the objects become a way to embed those questions and to talk with histories that I’m interested in talking with. And so the medium in that sense becomes less important. 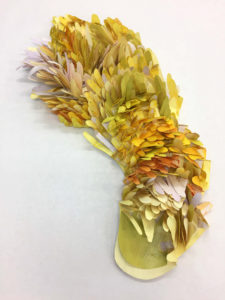 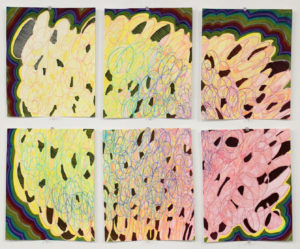 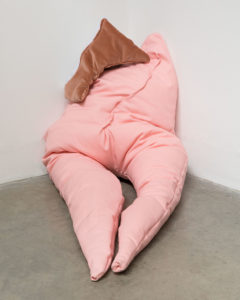 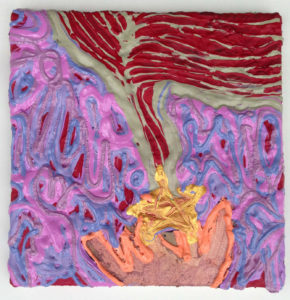 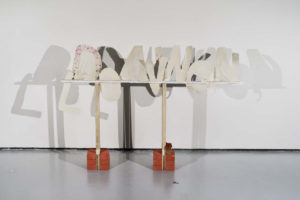 AMM: Do you have any projects that you’re working on right now? Or any particular questions you’re trying to answer?

LB: I’m writing these letters right now, and I’m not sure where this will lead me but it’s a kind of interim project. I’m writing on a piece of transparency paper and then drawing on the back of the letter, and then it bleeds through to the front. I’m learning how to write backwards and then I can “read the bleed.” I’m not sure where this is leading me, but I’m really interested in it as a form. I think I’m also going to continue to explore the paper pulp work because I don’t know that I’m entirely done with it yet.

AMM: Outside of your solo work, what kind of collaborations do you engage in? How else are you participating in the art scene, and the queer art scene?

LB: I’m a part of a curatorial collective that’s mostly Yale people that’s called Queering Space. At Yale there was not a huge queer community or a real sense of history so we started this exhibition as a way to find that history together and to bring other people into that space. It was people whose ideas I really respected, and we had this energy to do something together so we blossomed into a collective.

Find out more about the artist: www.lorenbritton.com 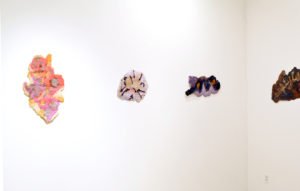